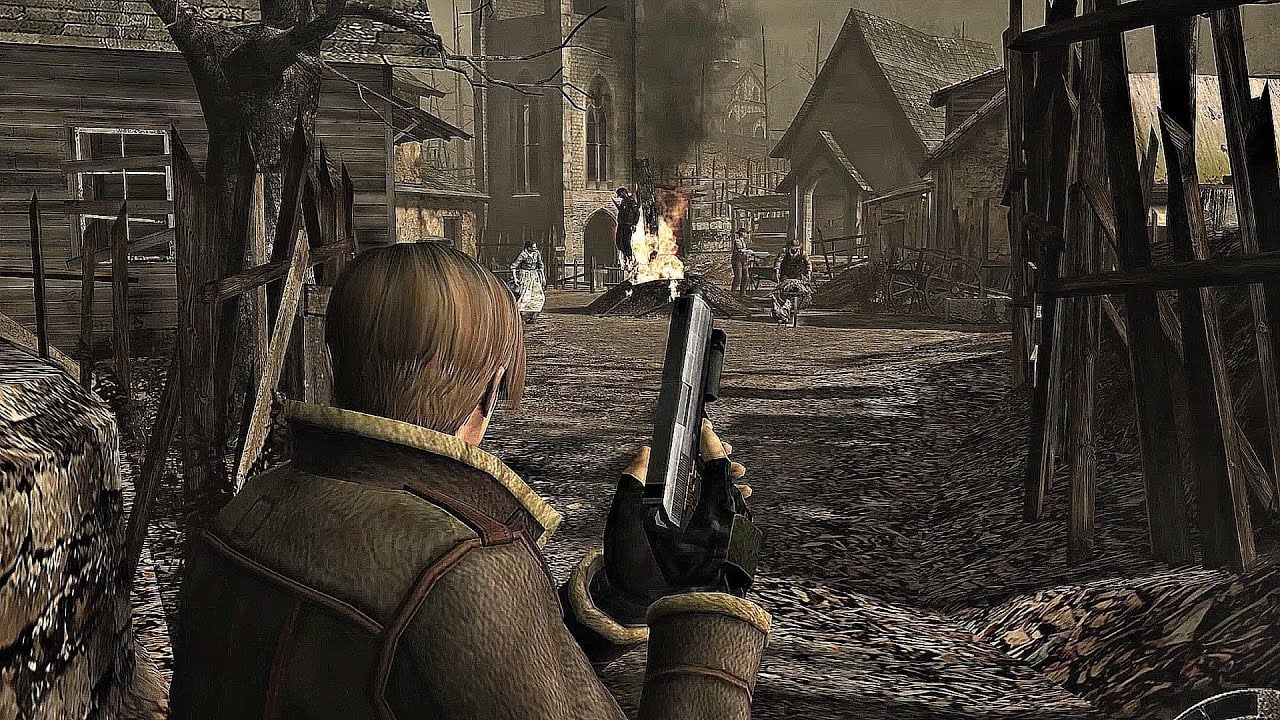 Resident Evil 4 is a game with a bit of a personality disorder. On the one hand, it was expected to echo the horror of its predecessors, utilizing slow, methodical pacing and placing the player in situations with only barely enough resources to survive. On the other hand, it was also sporting a new camera system that favored more freedom of movement, and complete overhauls of every gameplay aspect from inventory management to combat. It’s a game that very easily could’ve been really bad, caught between these two opposing ideas and not sure how to process them. Instead, it is a modern masterpiece, and there’s no better area to showcase how and why this game is so amazing than The Village. This is how you do a proper introduction and tell people “this is not your older brother’s Resident Evil game”.

The Village has no official name, but that’s fine since it doesn’t seem to need one. Its inhabitants are simple, churchgoing folks that enjoy things like pitching hay or chopping down trees, with the occasional presidential kidnapping and attempted homicide on weekends. The main area of the village is, like those who live within it, simple, consisting of only a few buildings and a chapel house at the far end. It’s quaint, quiet, and far from prying eyes. The perfect place for escaping from the world.

Until the world comes to it, in the form of Special Agent Leon Kennedy. Far from his old job working for the Raccoon City PD, Kennedy has landed a gig working for the US Secret Service, and his first task is to locate and rescue the daughter of the president, kidnapped and spirited away to The Village. A bunch of country folk caught up in a scheme bigger than themselves, no problem for a Secret Service member such as Leon.

Of course, as expected, everything goes wrong right away. Leon is attacked on the outskirts of town, as well as several times on his way toward the center of activity. By the time the player moves Leon towards The Village proper, it’s already apparent something is really, really wrong. As if matters couldn’t get any worse, one of the policemen Leon arrived with is cooking on a massive bonfire, a giant hook through his chest and the townsfolk milling around like it was an ordinary day.

The actual approach to The Village might be the defining moment of Resident Evil 4 since, for the first time in the franchise’s history, the player is legitimately offered a degree of freedom on how they want to handle the situation. One could rush to the center, firing wildly until taking cover in one of the buildings or try to dodge past the enemy and find shelter in the tower on the edge of town. You can skirt around the edges and probe for resources, avoiding the bulk of enemies until you’re ready to strike, or even find an entrance into one of the buildings and create a barricade to buy yourself some time.

To further complicate matters there’s the question of resources. It’s unlikely the player will have enough pistol rounds to last out the horde, and the knife isn’t nearly potent enough to be considered a viable strategy. But the villagers have been hoarding weapons of their own it seems, and around The Village are stocks of ammo, grenades, healing items, and the ultimate in home defense: a proper old-school pump-action shotgun. It’s possible to complete the sequence held up in a single location, but not advised since resources are spread throughout. This often forces players into a run-and-gun fight, something made difficult by RE4‘s stop-and-shoot control scheme. The player is forced to plan their battles, pick fights in places where they have a clear escape route and also keep the horde managed.

As if the prospect of dealing with dozens of angry townsfolk wasn’t harrowing enough, soon the telltale rusty ringing of a chainsaw will sound out and the first of RE4‘s many wood-shop rejects appears, ready to relieve Leon of the burden of having a head. Not only is the chainsaw maniac a one-hit kill should they get close to Leon, but they’re also a glutton for punishment, able to shrug of damage to the extreme. The only way to buy a moment of peace is a point-blank blast from the shotgun, and even then he tends to just get back up. It adds a brutal new layer to the fight, an obstacle that offers stiff resistance in contrast to the otherwise squishy villagers.

Finally, after what seems like forever, the scene ends, with the villagers retreating into an underground passage and Leon continuing his journey, while the player breathes a sigh of relief. All of RE4 is amazing, and it’s still regarded as the watermark for the rest of the franchise, but The Village was something even more special. It was the perfect showcase for how the new Resident Evil would look and play, and set a new standard for action-horror for years to come. Capcom clearly knew there was something special since the campaign has you backtrack through The Village later at night, and its the first level in the Mercenaries mini-game.

Whenever someone talks about RE4 it’s inevitable they’ll bring up The Village, and rightly so. It’s a true classic, a masterpiece of making use of gameplay mechanics to create tension. No matter where the Resident Evil franchise might go, Resident Evil 4 and its infamous Village will stand the test of time.