Mario Tennis Aces (or Ace in Japan) comes at a time where there’s a lot of newfound excitement and hope for the Mario Tennis series. This is owing to the successful trajectory Nintendo is set on these days with the Switch, and also because the game has looked pretty cool in all the teasers and trailers so far.

At the same time, you’d be forgiven if you’re not all that thrilled about Mario sports and party spinoffs, especially a Tennis title. Mario Tennis Aces is a successor to the easily forgotten Wii U Mario Tennis Ultra Smash; a game that you’d believe now if I told you was a tech demo for Aces.

Not to be confused with “Ace” from “Mario Tennis: Power Tour”. You know, what everyone is thinking about, I’m sure.

This weekend, Nintendo released a timed online-only demo for Aces on the eShop, lasting until the end of the day on Sunday, which gives us our first hands-on with Aces.

This online demo, officially called the Mario Tennis Aces Online Tournament Demo, is just as the name says. Stripped of all other primary game modes, like the story-based adventure mode and even couch co-op, the focus here is just on trying the game out in a tournament style against players from around the world.

But, does it improve upon Ultra Smash?

…..Yes. The quick, to-the-point short gist of it all is yes.

A lot of the gameplay remains similar to what you might imagine from a Mario Tennis game. You move around the court, rallying the ball back and forth from one side of the net to another, hitting the ball with varying kinds of shots (mapped to the controller’s face buttons), but it’s all so finely tuned and well-defined in Aces that it’s pleasure doing just that. There is a realistic weight to how each character moves.

And speaking of characters, there’s a good variety of character types, with 9 characters featured in the demo. We have slow but powerful titans like Bowser and Chain Chomp, speedy and agile maniacs like Toad and Yoshi, and defensive (yet alluring) champs like Waluigi. Rosalina and Peach, who are “tricky” and “technical” respectively, are more complicated characters I failed to get a good understanding of in this limited demo but would love to play more when the full game releases. Spike is also included in demo as a “powerful” character, but moves around the court a lot faster than Bowser and Chain Chomp.

Rosalina is one of the more interesting characters to learn.

Of course, Mario serves an all-around, good at everything, perfect hero. I kinda hate him.

Outside of your simple lobs and such, you are equipped with a variety of moves and abilities, all of which are tied to an energy gauge, new to Aces. Using the energy gauge, you can slow down time (called “Zone Speed”) to make it to a far away rally or give yourself a little breather to plan a shot. You can also perform “Trick Shots”, an ability that stylishly zooms your character to an incoming ball, and timing it just right rewards you with a boost of energy for your gauge.

“Zone Shots”, performed in time within a star marker where an incoming ball is going to land, allow you to jump into the air, freeze time and aim a ball at the opposite side of the court with either motion controls or the controller stick. Similarly, a “Special Shot” is similar but requires a full flaming energy gauge and can be initiated by just a simple press of a button regardless of where the ball is on your side of the net.

Both of these shots, however, can be blocked with a well-timed, well, block. Not without a risk though. a mistimed Zone Shot block will cost your racket a health point; three strikes, and you’re out of a racket. Lose your second racket, and it’s game over. A mistimed block for a Special Shot will completely destroy a racket regardless of health, so be careful!

With all these elements combined, Mario Tennis Aces becomes a complex competitive game, which kind of feels like a bit of a fighting game. On more than one occasion, I was reminded of having close matches in a title like ARMS or, to a lesser extent, Smash Bros, and to an even lesser extent, Street Fighter.

As the demo revolved around the online tournament I can’t speak to the variety of modes in the game just yet. I hope, taking a cue from ARMS, there’s something similar to that game’s “Party Mode”, or Mario Kart‘s battle modes. Fun and creative mini-games that offer something different than your standard tennis game. 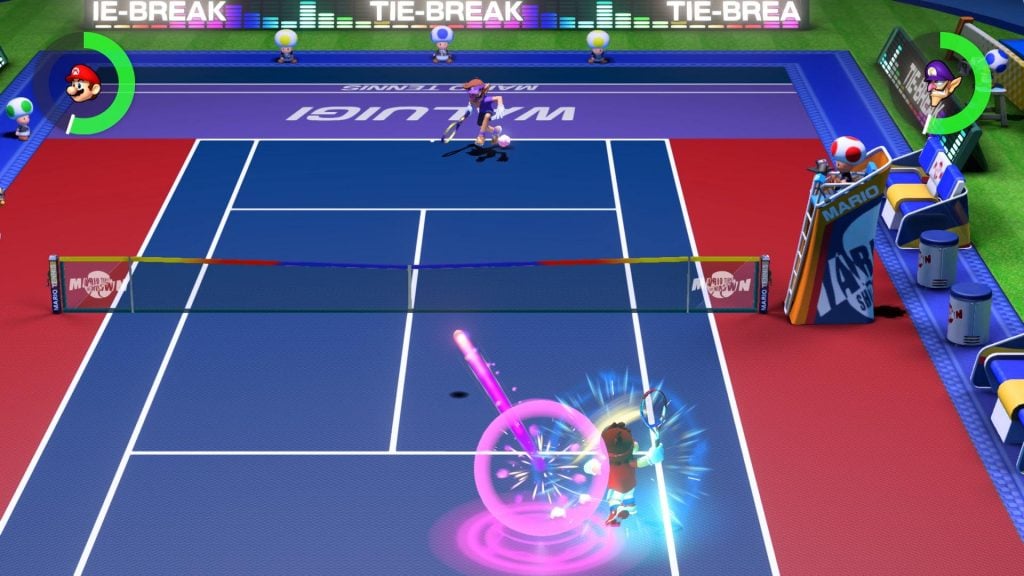 Timing is everything in “Mario Tennis Aces”, making even the slightest lag cause you a whole match.

What I hope however, most of all, is a more robust online code. A lot of my tournament matches were a little laggy but doable. Yet at times the game would become unplayable due to a bad connection, with inputs delayed by several seconds.

This wasn’t due to a bad connection on my end, but an issue that many players faced while testing out the demo. I’ve never experienced lag this bad on the Switch, and I have played ARMS and Mario Kart 8 online extensively.

This is something that really needs to be ironed out before release. That, and perhaps removing the ability to see what character your opponent is using before accepting a match. You don’t want players only accepting matches against specific characters.

Unchained no more! Chain Chomp is in the game. Look at him holding that racket. Look at it. GOTY.

Once considered the crème de la crème of multiplayer fun-times, ranging from Mario and friends playing ordinary sports like golf and soccer (and tennis!) extraordinarily, to playing hot potato with Bob-ombs on the verge of death as a kind of blood-sport viewing for the audience, the spinoff department for Mario games had been reduced to quick shoveware-ish affairs.

But, Mario Tennis Aces is shaping up to be a return to form for Mario sports titles, and then some.

Connectivity issues aside, I had a lot of fun with this demo, and am looking forward to giving it a full go when it comes out on June 22nd.