The world just got weirder with ‘Super Mario Odyssey’

After a fleeting glimpse of the heroic plumber in the Switch announcement trailer, it was a pretty safe bet that Nintendo would proudly show off Mario’s latest adventure during the console’s big unveiling, but though ultimately seeing the heroic little plumber climb out of a sewer to introduce Super Mario Odyssey should have felt as natural as watching him stomp a goomba, the trailer that followed tumbled down the rabbit hole to a world more acid-trippy than anything the Mushroom Kingdom has ever produced. And it looks fantastic.

Rememeber that Simpsons Halloween episode where Homer pierces the space-time continuum and is sucked into our real world? Starting the trailer by having Mario run through a “realistic” metropolis filled with an eerily non-cartoonish mannequin-like population, doing his normal bouncy, upbeat schtick amongst the blank-stare residents of this uncanny valley evoked similarly disconcerting emotions. Sure, the parkour-style platforming displayed was familiar enough (with shades of Lego City Undercover), as wall-jumping up the sides of skyscrapers and hopping off of taxi cabs to swing on lamp posts gave off the series’ usual vibe vibe, but the contrast of suddenly Mario was jumping rope in a park, surrounded by stone-faced G-men who observed with an air of intimidation, as if New Donk City is some sort alternate universe fascist society that tortures their citizens with children’s games, was a little jarring. Whatever the hell the mustachioed man has gotten himself into with this stage seems more like an episode of The Twilight Zone than a standard Super Mario level, and though by far the strangest place shown that this new adventure will take players, it was just the beginning. 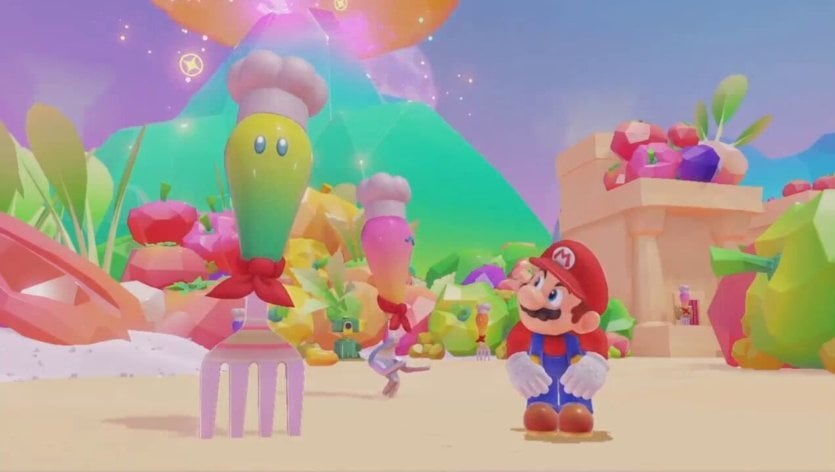 From a hat with eyes, riding some lion thing, an oversized bowl of butt-burning soup, demented bunnies from the Mad Hatter’s tea party, a giant robot spider doing a King Kong impression, a top hat-shaped airship (okay, seeing the hat theme), fork people living in a world made of food, all the way up through boom-box dancing in the forest and so much more, there seems to be no thread tying Super Mario Odyssey‘s world together, no apparent theme to the gameplay (other than the hat thing). I half expected to see a level take place in the kitchen sink, as it looks like Nintendo has thrown everything else into this title, and that random weirdness is precisely what makes it so exciting.

Nintendo has and probably always will catch flack for the often oddball ideas they bring to the market, but it’s precisely because of their willingness to take risks and experiment with even their most hallowed franchises that they remain the best game makers in the world. Not everything works, but so very much does, and the sheer variety of imagination demonstrated to dream up new ways to play old things is how loyal fanbases are made. Sure, Nintendo could have played things safe and capitulated to the comment boards by releasing Mario Galaxy 3 or Sunshine 2, but to their credit they keep pushing the series forward into (extremely) unknown places. Yes, Super Mario Odyssey looks like it will involve Bowser once again trying to marry Peach for whatever reason, and the seemingly open-world nature hearkens back to Mario 64 and Sunshine, but those traditional elements are merely a canvas for Nintendo’s artists to paint their picture upon. The story is only tired if you forget why people play Mario in the first place: gaming.

Even from the mere two minutes shown, it’s obvious that some new toys have been placed in this sandbox, and playing with them is going to be a blast. The power of fashion was teased, as Mario’s hat was seen as being used as both a thrown weapon and a platform to reach greater heights, but eagle-eyed viewers may have also spotted the sweet chapeau store in the Day of the Dead-ish village; what gameplay-changing treasures lie within? New basic moves were also on display, showing Mario do his best Goron imitation while rolling through the desert, as well as shimmying along the edges of a building ledge. While these may not seem like much to Mario rookies, those who donned a cat suit in Super Mario 3D World or created a cloud in Galaxy 2 know how clever Nintendo can get in taking advantage of new abilities, and no doubt Mario will have some unique and incredibly fun ways to interact with all the wackiness around him here.

There are a ton of great franchises out there, but few for which a trailer can be shown and the audience still has no idea what they’re really in for. Super Mario Odyssey so far looks like Nintendo at their most bizarre and inventive best, gleeful random excess that throws caution to the wind and dares to be different from what came before. It looks incredibly weird, incredibly fun, and completely Nintendo.