With the release of the Nintendo Switch closing in and the recently announced Mario Kart 8 Deluxe a mere two months away, the infectious Mario Kart fever is rapidly spreading across the world. For 25 years, Mario Kart has stood on a pedestal, reigning supreme as the ultimate party game, the harbinger of both joy and frustration, leaving both bitter losses and sweet triumphs in its wake. As we eagerly await the next installation in the legendary series, we take a look back at what defines the game, as well as a look to the future in which we determine what we want to see in the upcoming installations.

Super Mario Kart, the very first incarnation of the game, was released in 1992 for the Super Nintendo Entertainment System. The game quickly proved itself to be revolutionary in many ways. For starters, the perspective of the game was something entirely new. While many previous racing games were seen from above, with the cars moving around in a rather bland and stationary environment, Super Mario Kart brought an entirely new mechanic to the scene. In this game, the environment was truly alive. The vibrant and colorful world would unfold itself as you drove, thus having the game distance itself from the lackluster racing experiences of past games. For the first time, your perspective of the world would change in accordance with the motion of the vehicle, as the players saw themselves from behind, instead of from above.

Super Mario Kart also popularized power-ups in racing games – instead of relying solely on the skill of the driver, the inclusion of various items made the experience less predictable as a whole, opening up the possibility of a more varied and exciting outcome to the races. This managed to set the game apart from virtually every other racing game of the time. Combined with the exquisite multiplayer mode, in which two players would play simultaneously as opposed to the turn-based system that was the norm on the console, the Mario Kart franchise manifested itself as flagship titles of the Nintendo company.

As time passed, technology became increasingly advanced, and the Mario Kart games were continuously improved. In the late 90’s, Mario Kart 64 was introduced to the public. Nintendo had once again proven their innovative capabilities with this fully 3D kart racer, complete with a large variety of characters, courses and game modes. The Gamecube was the next console to follow, and the new millennium ushered in the age of Mario Kart: Double Dash. As the name implied, players could now ride as a pair of characters together on one vehicle, opening the players up to a large variety of cooperative possibilities. Installations of the games appeared on both the Wii and the Wii U, each game improving on the overall experience by improving the graphics, gameplay, levels, characters, and vehicles. There’s also been Mario Kart games for the Gameboy Advance, Nintendo DS and Nintendo 3DS, providing us with the option of playing the games on the go, and playing local wireless multiplayer between many systems.

Needless to say, the Mario Kart series is a legendary Nintendo trademark. Thus, a plethora of gamers were absolutely thrilled when the company announced a Deluxe Nintendo Switch edition of the fantastic Mario Kart 8. So precisely what are we looking for in this upcoming game?

A valid concern that many hold regarding this upcoming title is the fear of this being nothing but a cheap repackaging of Mario Kart 8. I, however, beg to differ. According to the trailers, the game will provide us with many great features that were regrettably absent from the previous version. I’m talking about features such as holding two items at once, and the addition of real battle maps. It’s a well-known fact that the battle mode in MK8 was lackluster at best. The goal of the battle remained the same as it has always been, but instead of coming up with real battle arenas, we were faced with the same maps as in the race mode. This made for an awfully impractical battle mode, and it’s honestly a great relief that this will be fixed in the Deluxe edition. 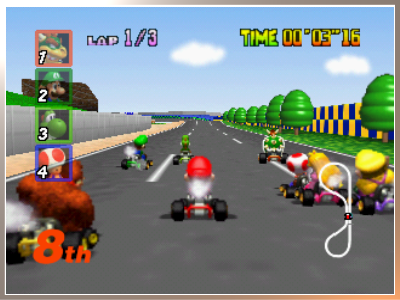 Another thing that’s worth noting is how the company continues to build on the trend that was started in the previous game, where characters from other Nintendo-franchises were being introduced as playable characters, making the roster reminiscent of the one in Super Smash Bros., a change I very much welcome. MK8 Deluxe will have a few returning characters such as King Boo, as well as new characters from newer franchises, namely the Inklings from Splatoon. Personally, I find it to be a welcome change of pace, and I believe it’s a clever tactic that slowly familiarizes players with newer franchises of the company.

In conclusion, we have a lot to look forward to. Not only regarding Mario Kart 8 Deluxe, but also regarding the franchise as a whole. What will future installations bring to the scene? What new characters, courses and game modes lie in store? Will we ever see the return of functions such as the Double Dash system? All we know for sure is that Nintendo surely has many tricks up their sleeves, and will provide us with many great experiences shortly.

Mario Kart 8 Deluxe is scheduled for release on April 28th.