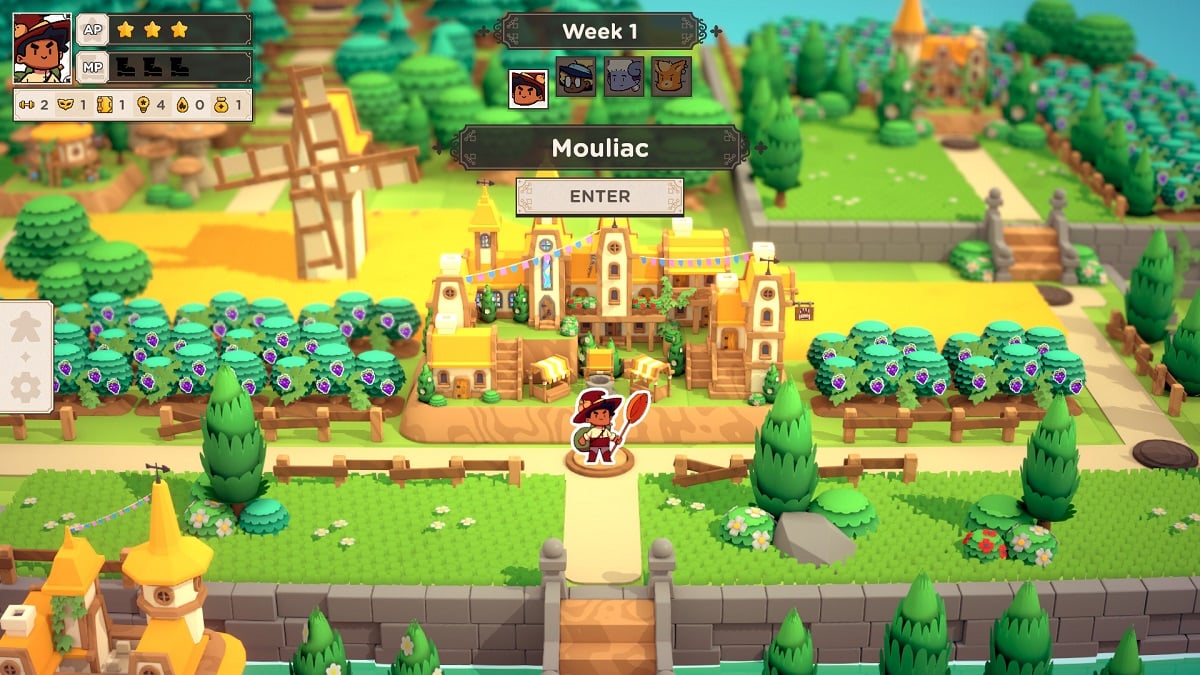 With every passing year it seems like video games are garnering more and more respect as an authentic way to tell and experience stories. One of the forces at the forefront of this movement is LudoNarraCon, an annual digital narrative games festival hosted by Fellow Traveler that highlights some of the best indie projects from around the world. Aside from a plethora of panels, exhibits, and Steam sales, LudoNarraCon also lets players dive in themselves with dozens of game demos up for grabs during the con. To help narrow things down a bit this year, we’ve put together a list of the top five demos you need to be aware of. If any speak to you, be sure to wishlist them on Steam!

Inspired by tabletop RPGs, Baladins plops players into an adorable fantasy world brought to life by delightful 2D animation and colorful art. With campaigns that only last an hour as opposed to the lengthier ones tabletop players typically contend with, Baladins focuses on simple fun and objectives rather than combat or character building. After playing, I immediately felt the itch to dive into something more involved like Wildermyth; that is to say, it’s a great gateway into the tabletop RPG genre.

Despite playing solo (Baladins is ideally meant for multiplayer sessions), I still had a fun time with the demo. Of particular note were the random encounters the narrator/dungeon master presented as I traveled between locations. These encounters reward thinking creatively rather than seriously; after getting lost in the woods, for instance, I chose to sing about my hardships and caused the local wildlife to rally around me and guide me to safety. It’s these kinds of silly situations that lend themselves perfectly to sessions with a group of friends. You can wishlist Baladins here and back Baladins on Kickstarter here.

How to Say Goodbye

Of all the demos I played during LudoNarraCon, How to Say Goodbye was the most emotionally resonant. After dying and turning into a ghost, the protagonist suddenly appears in a world akin to purgatory. After realizing that he’s dead, his first thought is that he’ll finally be able to be reunited with the brother that passed away when he was a child. Finding him involves sliding around surrealist environments while avoiding a variety of malevolent spirits attempting to make him give up at every turn.

How to Say Goodbye is the latest in a slew of indies that’re focusing on the experience of death and grief, and its approach is both novel and heartfelt. The sliding puzzles strike a great balance between being approachable and just complex enough to engage the mind. Though it would almost certainly play best on a tablet or Switch with touch controls, the Steam demo controlled well enough and the gorgeous abstract art looks even better in motion. Most importantly of all, scenes benefit from well-written framing and dialogue that should resonate with anyone who’s lost a loved one. You can wishlist How to Say Goodbye here.

What if, instead of simply releasing criminals back onto the streets after they serve some time, you could find the personality flaw that caused them to be destructive in the first place and eliminate it for good? This is the pretense of MINDHACK, a dynamic visual novel where players step into the shoes of a seasoned “mindhacker” and work to eliminate “bugs,” or personality disorders, with the help of an AI.

While this isn’t a wholly new concept for a game, the way MINDHACK envelopes you in its world is second to none. The ethics of the mindhacking are put into question organically through the presentation of complex villains with relatable struggles and backstories. What’s more, by allowing me to manually conduct the mindhack (via a surprisingly visceral sequence I won’t spoil here) it made me feel that much more responsible for the outcome. Despite the demo only covering one operation, it’s already triggered a multitude of questions I can’t wait to learn the answers to later this year. You can wishlist MINDHACK here.

Launching the Coffee Talk Episode 2 demo was like seeing an old friend again. The first game became a fan favorite thanks to its mix of down-to-earth conversations, cozy coffee shop vibes, and well-written characters you got to learn about between fulfilling orders. Coffee Talk Episode 2: Hibiscus & Butterfly is more of the same, but refined; there’s now the option to hand over an item with an order (e.g. a letter), and a new upgrade to the Tomodachill app introduces stories that give a further peek into the day-to-day lives of customers.

Nonetheless, the main draw is still the conversations, and this demo displayed a masterful grasp of both scenario and dialogue writing. Be it a return to jolly conversations with Officer Jorji or the incredibly poignant portrayal of the viciousness of YouTube comment culture, I walked away eager to set up shop in Seattle once again and chat up customers old and new. Coffee Talk Episode 2: Hibiscus & Butterfly is set to release in 2023 and you can wishlist it here.

A Year of Springs

Telling an impactful story across 50 hours is a commendable feat, but there’s also a tremendous amount of skill involved in delivering a more compact story that hits just as hard. This was my experience playing the demo for A Year of Springs, a collection of three short visual novels about a trio of young women and the situations they find themselves in.

The demo consisted of the first VN in its entirety, titled one night, hot springs. In it, a young trans woman living in Japan struggles with being invited to a hot springs to celebrate her best friend’s birthday. For as mortifying of a scenario as this might seem at first blush, creator npckc does stellar job of handling it delicately while not shying away from realism. The cute, soft art style complements the tone of the story; it radiates kindness and warmth. Each VN has multiple endings (one night, hot springs has six) and one overarching epilogue following the completion of all three stories. It’s the perfect bite-sized experience for those who enjoy visual novels but not the amount of time they take to complete. Best of all, A Year of Springs is out now on all platforms!

You can find our selections from last year’s LudoNarraCon here.