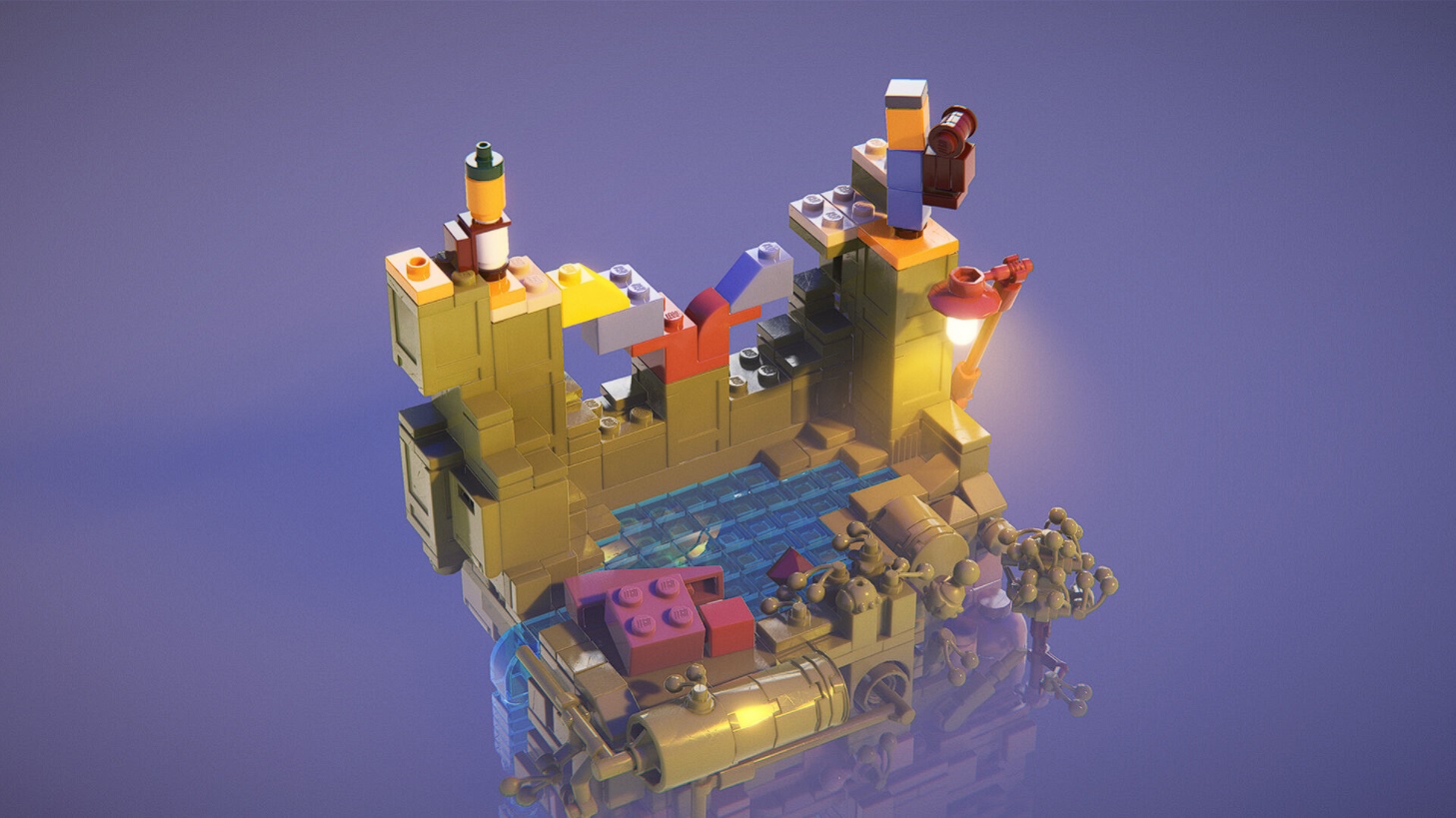 Originally debuting on Apple Arcade in 2019, LEGO Builder’s Journey quickly became one of the platform’s most critically acclaimed titles upon its debut. Being an ambient puzzle adventure focused on the creativity of Denmark’s globally popular toy company, Light Brick Studios perfectly captured the essence of everyone’s favorite construction product in one compact series of enigmas. Gushing with beautiful graphics, interactive creativity, and an easy-going score, the product itself is an uplifting and laidback period of ambiance. With its port to Nintendo Switch and Steam that adds a few levels, however, LEGO Builder’s Journey is ultimately still the same peaceful game restricted by an upsettingly short runtime and questionably high price.

Like playing with the actual bricks themselves, LEGO Builder’s Journey asks players to adhere to instructions while still following their own creative path. Telling a silent story of two family members who are involved in play and creation, the game jumps between small setpieces that each contain a short puzzle to solve. The majority of the game involves getting a character from point A to B in thoughtful ways, but occasionally there are other tasks that help the narrative stay true to telling a story. Almost every puzzle featured throughout the game holds many ways to solve it as you bounce between both characters who are going through different activities. In the same style as real LEGOs, the player has to connect pieces together that will allow the characters to progress forward in their situations. In the same fashion as building a creation together with a limited amount of bricks, as long as you use your pieces smartly the puzzles are solvable from a vast multitude of unique angles.

At its core, even if it is a puzzle game, what the title accomplishes is creating a world that feels catered to LEGO fans. LEGO Builder’s Journey is for young and old fans who love putting the smallest of bricks together. It admirably replicates The LEGO Company’s key philosophies of inclusiveness and showing a high-quality product standard.

LEGO Builder’s Journey surprisingly offers quite a few ways to play as it reaps the rewards of accessibility. While there are traditional button controls, touchscreen input for handheld players and motion controls for those playing docked on the Nintendo Switch are also available. The only aspect of the simple control scheme that can sometimes hinder the experience is the camera that can get in the way of certain puzzles. As a LEGO enthusiast who was attempting to outsmart the intended path players are expected to loosely follow, I found myself enjoying the game most when playing with touch controls. The Switch’s handheld touchscreen offers far more versatility as clicking bricks and changing the angle of the camera can be done in rapid succession compared to that. While the standard button controls are certainly substantial — especially when playing with the d-pad for tight precision — the Apple Arcade port still clearly carries its desire to use touch controls.

By far the game’s most stunning aspect is its beautiful visuals that feel so close to being realistic. Like the majority of LEGO’s game developers, Light Brick Studios did not joke around when it came to building their own unique digital world. Behind the scenes, the team first crafted their puzzles in real life and then photographed them for digital recreation. The result is nothing short of exceptional as LEGO Builder’s Journey looks incredibly tangible for those who have held the real pieces being featured in the game before. From the reflectiveness of bricks to the sounds they make when snapping together, every aspect of the atmosphere of the title from both a visual and sound design perspective is riveting. It seriously might just be the most realistic presentation a LEGO game has ever offered. Every compact setpiece feels like something the player could purchase and build in real life — they are always simple, never overly complex, and packed with the detail you would expect from a small size LEGO product.

However, with that premium atmosphere comes with a setback audiences find in most LEGO products: the price. While its pristine quality is constantly flaunting itself in an atmosphere that always feels tangible and alive, the project’s $19.99 price tag will surely be the reason why customers will not be purchasing this release on day one. LEGO Builder’s Journey is a short game, one that could last quite literally a little under an hour depending on the player’s skillset. As someone who grew up building complicated and large LEGO sets that are now sitting on display upon my bookshelf, I managed to 100% complete the game in roughly a little less than an hour. It really is a shame how short the game is because its capabilities are practically a pandora’s box. By the time the player reaches the end of the journey, they will be craving for more puzzles whether they be challenging or just relaxing.

LEGO Builder’s Journey is a charming puzzle game that creatively utilizes its famous plastic bricks, but it also is a title that is too short and offers very little for its price. Its premium production is always on display as it constantly upholds beautiful graphics and a surprisingly touching story, but its high price tag sadly does not justify its overall value. It certainly is a perfect experience for LEGO enthusiasts looking for a digital playground that exactly reflects working on real sets, but the game constantly comes off as just a fantastic foundation — a demo to something that could be absolutely expanded upon for a large-scale project. When it inevitably hits the sales page on the Nintendo eShop or even Steam, LEGO fans should undoubtedly jump on this high-quality adventure. LEGO Builder’s Journey is a short and sweet, but perhaps not for the right price.