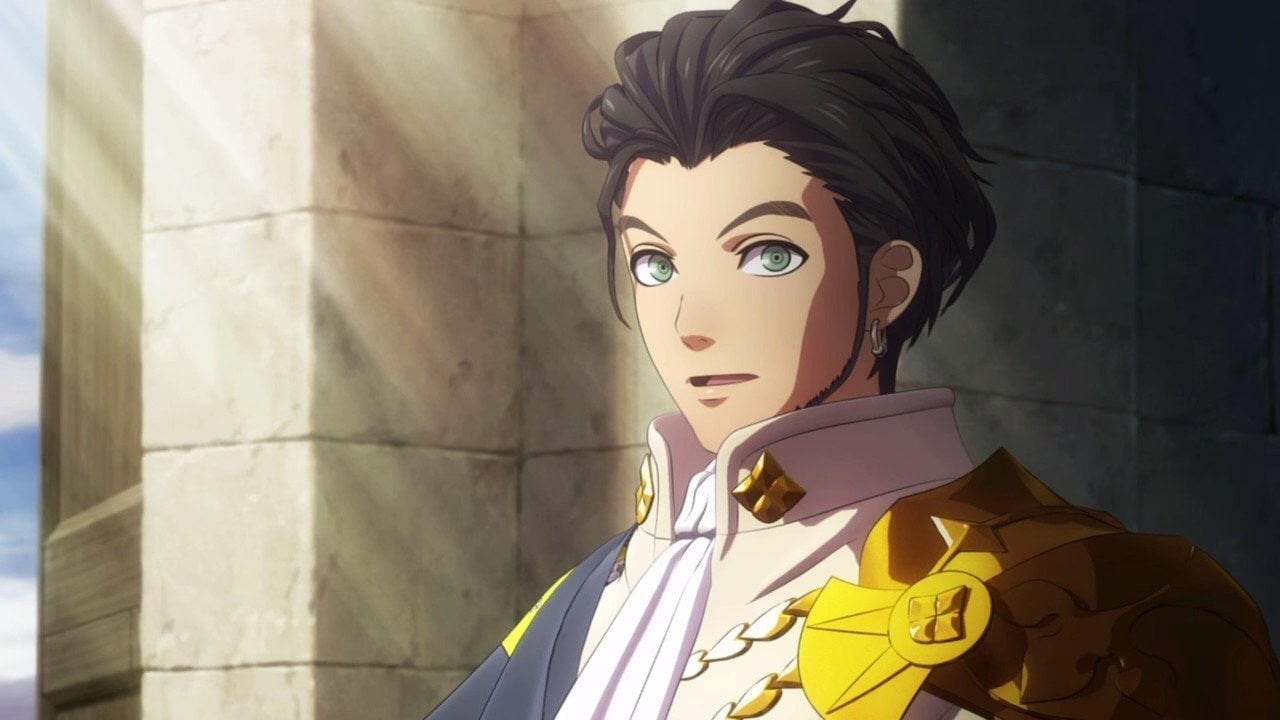 When Fire Emblem: Three Houses hit the scene, the community was thrown in three directions. Who were you to side with? The house of the Blue Lions or the Black Eagles? Would you stand with the Holy Kingdom of Faerghus led by Dimitri Alexandre Blaiddyd or the Adrestian Empire with Edelgard von Hresvelg? The only right answer for many was obviously the house helmed by the handsome marksman who appeared unironically yet hilariously upside down on the box-art. The house that banished polygons and held itself high as the home of memes was none other than the underdogs- or more appropriately underdoe — the Golden Deer.

The Leicester Alliance’s overseas fandom has practically been spearheaded by their house leader’s English voice actor Joe Zieja — an absolute passionate goofball who has had a hand in bringing other popular characters to life when he is not busy writing novels or streaming let’s plays for his fans. Before Three Houses even had the chance to hit store shelves, Claude von Riegan’s impact on Zieja began to take a major effect as the passion behind the Golden Deer fandom grew. Now almost one year after the house leader made his public debut worldwide on July 26, 2019, he has arguably become more than just a Nintendo icon. I had the opportunity to ask Zieja about the upcoming anniversary of Three Houses, his relationship with the Fire Emblem fandom, Claude’s impact as an icon, and much more in my interview.

Goomba Stomp: So Mr. Zieja, Fire Emblem: Three Houses will officially turn one year old this month. Not only is it one of the highest-selling Switch titles, but it is also one of the most critically acclaimed FE titles and on top of that almost the best selling game in the franchise. Over the course of the year, we have seen thousands of fan art, a new DLC story, and hundreds of new players entering the series. How has your perspective of Fire Emblem changed after all of this? Were you a fan of the series before Three Houses was a hit? A big fan afterward?

Zieja: I played Fire Emblem: Awakening before I got the role as Claude because I’d always heard good things about the series but had never tried it. I enjoyed it, but I can’t say I was a diehard FE fan before Three Houses. I loved the way Three Houses took the SRPG format and played with it a little more, leaning on its past experience and sort of reinventing the genre. Having recently replayed Final Fantasy Tactics, it was really interesting to see how the SRPG has matured as a subgenre, and how Fire Emblem has really been at the helm of those innovations.

GS: Fire Emblem: Three Houses has plenty of heartbreaking moments- especially in comparison to other games in the franchise. You may have voiced the most upbeat character of the main cast, but that does not mean there were not any hard-hitting scenes. Was there a particular moment that really hit you while doing the voice over for Claude? As a young character, he certainly faces a lot of trauma like his peers when facing the challenges of physical combat and adulthood. Was there a moment that hit harder when you played through the game rather than when you first voiced it?

Zieja: You know, one of the interesting things about Claude’s character is that, to me, he’s a textbook stoic. He moves to change the things he can and copes with the things he cannot. We never hear him complain or lament; he accepts things and moves on. That makes it sometimes seem like there’s nothing on his shoulders, that he takes everything very lightly. But the part that really hit me hard, I remember, is Claude’s death line – “All my dreams have turned to ash.” Claude is the picture of ambition, with big dreams. It’s the central theme of his life; to have all of that fall away to dust at the tip of a sword is a sad ending to that story.

GS: I’m sure you would of course want to play Claude in the future. Asking whether you would play him again is a no-brainer question, except do you feel that this is a character where his story is complete? As a fan of the game, would you rather say the door is closed on his arc for good with Three Houses and only make small appearances in other Fire Emblem games and crossovers (Super Smash Bros.) in the future or continue where his quest left off if the opportunity came about?

Zieja: One of the things about Claude’s arc that always stuck out to me was that it kind of felt like it hadn’t actually begun yet. His was a plot of allusions, it seemed; he was always making reference to his ideas and schemes, but never really tipped his hand. That’s very much in line with Claude’s personality, but I would love to get a bit more in his head about what his childhood in Almyra was like, events of his life inspired him to want to unify Fodlan – or what he plans to do with his success after the Verdant Wind campaign. He has huge goals, but not a lot of insight into them. We get a chance to understand Edelgard’s point of view in her story, and why she’s doing what she’s doing, but we don’t quite get the same treatment for Claude. I feel like there’s a lot more to dig into there. Whether or not the future has a game with a title like Fire Emblem: To Almyra and Back Again in store for us, that knowledge is in heaven’s hands.

GS: Before even Three Houses released, Claude rose to become an icon in the LGBTQ community, however, the leader of the Golden Deer has no same-sex romance options in-game. Can you share some thoughts on this? Did you ever expect something like this to occur?

Zieja: Not really understanding very much about the S-Support system of Fire Emblem before the game came out, I didn’t quite realize exactly how playable an aspect a character’s sexuality was in the game. People were really disappointed when Claude was revealed as having no same-sex options for romance, and honestly so was I. With that, I didn’t expect him to become an icon in the LGBTQ community at all, specifically for that reason, but something about Claude’s character really resonated with that community. Maybe it has something to do with the way he seems to accept everyone at face value, and doesn’t really judge. Even Edelgard, the villain of his arc, doesn’t take any real hate from Claude. He respects and admires her as a rival with her own dreams and goals that just happen to conflict with his. One thing I have said to LGBTQ fans who have expressed disappointment about Claude’s lack of sexuality options, though, is this: LGBTQ rights are human rights, whether a video game character expresses them or not! But I’m glad that Claude can, in whatever way he does, help bring peace to peoples’ hearts.

“There are a LOT of memes for Fire Emblem, and the Golden Deer seems to be the most meme-y of the houses,” says Zieja.

GS: You certainly post a lot of fan creations regarding the Leicester Alliance and The Golden Deer house across your social media. Off the top of your head, what is your absolute favorite meme you have seen from fans so far?

Zieja: Allegra Clark and I did a review on my YouTube channel of some of our favorites; it would be hard for me to pick one. Overall though, the display of sheer talent I see from artists who are Fire Emblem fans has me gobsmacked nearly every day. You all create some fantastic art; not just in the technical skill, but in the symbology that you call up and apply. I saw a drawing of Edelgard’s coronation with a crown of thorns being placed on her head, blood running down her face, and man, that gave me chills.

GS: Claude has already begun making appearances elsewhere. Not only was he featured as an unlockable ally in Fire Emblem: Heroes on mobile devices, but the character has two small cameos in the latest entry of Nintendo’s most popular fighting series, Super Smash Brothers. Were you aware that the character would make an appearance or was this a complete surprise to you? Are you a Smash Bros. fan at all?

Zieja: Complete surprise! I enjoy Smash now and then, sure. I was big into the N64 version, and then fell out of it, but I have played the one on Switch a bit.

While Zieja continues to make digital appearances, hold gaming lets play live streams, and write comedy skits for his rising YouTube channel, making his fans happy is what he cares about the most. Claude von Riegan may have only had the opportunity to truly shine for a year now, but the strong fandom behind his role and the house of the Golden Deer will never end. Until Claude’s next surprise appearance in the Fire Emblem series, every fan of Zieja’s work can look forward to him appearing in several upcoming projects including Transformers: War for Cybertron on Netflix. If you have not perused his science fiction novel trilogy the Epic Failure series, I recommend you also give it a read now that all three books are available.

“I am really glad to have met all of you in the Fire Emblem fandom,” says Zieja. “The community that has sprung up around Three Houses, around my stream, etc. has shown itself to be a group full of love and passion. I hope to have a long list of projects under my belt before I retire, but Three Houses will always have a special place in my heart. Fear the Deer!”