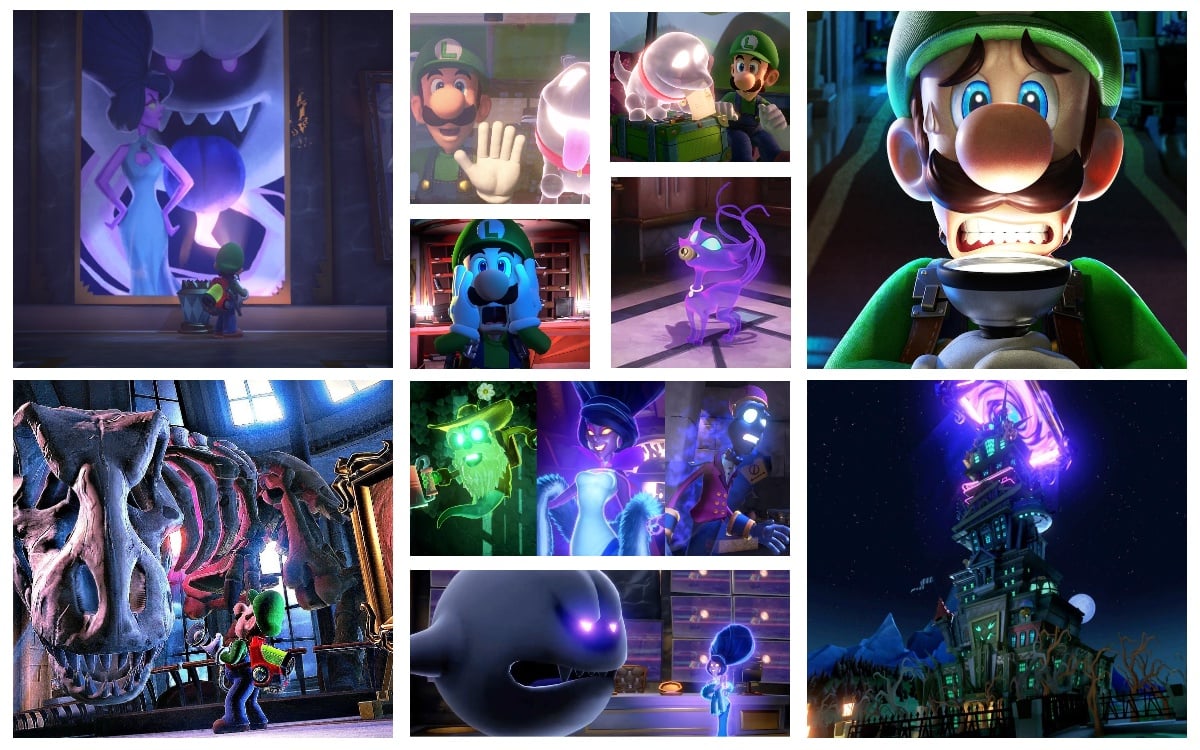 As well-received as Luigi’s Mansion: Dark Moon was upon its release, it was evident there was massive room for improvement. Alongside other criticisms like the mission-based structure, many players were not too keen on how the game handled its boss battles, especially when compared to the first game. The developers seemed to agree with this sentiment, as they specifically promised that the follow-up, Luigi’s Mansion 3, would feature a better boss lineup. When Luigi’s Mansion 3 finally released in 2019, it was clear that the team at Next Level Games was serious about upholding this promise. Not only does Luigi’s Mansion 3 contain far more bosses than Dark Moon, but it also succeeds at making each boss feel far more visually, conceptually, and mechanically resonant.

One of the most obvious ways that Luigi’s Mansion 3 improves upon the previous game’s bosses is with their aesthetics and personalities. In Dark Moon, five of the game’s seven boss battles are against one of the Possessor ghosts, all of which share a virtually identical visual design. The only visual difference between each Possessor ghost is the number of horns they have, and their personalities can be summed up as “generically evil.” It’s evident that these ghosts on their own have little going for them, but they are bolstered by their unique ability to take control of both living creatures and inanimate objects. This gimmick is how each ghost distinguishes itself both visually and mechanically, and the objects they can possess range from a folding staircase to a large sheet of ice. Admittedly, there is a fun novelty to surviving and fighting against everyday furniture and decor, with the suits of armor being a particular highlight. But inanimate objects are not characters, and the fact that they are the only reason the Possessor ghosts stand out at all gives players little to latch onto personality-wise. One reason why video game boss battles can be so enjoyable is that they allow players to learn the boss’s character through the game mechanics, so it’s unfortunate that Dark Moon does not take advantage of this.

Luigi’s Mansion 3, on the other hand, goes all-in on making each boss feel distinct, both in terms of visuals and personality. Each boss’s design is themed after the floor they reside on; the medieval floor features the king ghost, the pyramid floor contains the pharaoh ghost, and so on. Using visual design to adhere to a theme is far from revolutionary, but it marks a significant improvement from Dark Moon’s homogenized boss designs. The bosses are also far more expressive and full of life, and the game does an admirable job of incorporating their personalities into their fights. For instance, Chambrea, the chambermaid ghost, forces Luigi to track her down in various rooms of the hotel, which is appropriate given her profession. Kruller, the mall cop ghost, is very skittish and easily frightened, so he constantly rolls around the room to keep distance between him and Gooigi. Hellen Gravely, the luxurious and uptight owner of the hotel, is not much of a fighter, so she mostly relies on her security systems and laser gates to deal with Luigi indirectly. These details make Luigi’s Mansion 3’s bosses feel much more considered in their designs compared to those of Dark Moon, but the game isn’t afraid to reuse some of Dark Moon’s concepts. Namely, some of the bosses still possess inanimate objects, such as a piano or a T-rex skeleton, but the ghosts that possess them still use the same design principles as the rest of 3’s bosses, so it’s the best of both worlds.

Luigi’s Mansion 3 also outclasses its predecessor when it comes to the boss fights themselves. To be clear, Dark Moon’s execution on this front has some merits. In fact, the game’s first boss, the giant spider, is genuinely fantastic, as it’s essentially a big puzzle that escalates in complexity over the course of the fight. Manipulating the environment to figure out how to catch the spider’s webbing on fire is both novel and challenging, and it bodes well for the rest of the boss lineup. Unfortunately, Dark Moon loses its steam way too early in this regard, as the other bosses are nowhere near as inspired mechanically. The bosses in the middle portion of the game were clearly made with variety in mind, as they all have a different gameplay focus. The staircase is purely about dodging attacks rather than puzzle-solving, the giant clock is a gauntlet of all the enemies encountered up to that point, and the sheet of ice is a shooting gallery. The quality of these fights varies, with the staircase being overly trivial and the other two fights being relatively decent, but they all feel like simplistic diversions that do little to capitalize on the intricate environmental puzzle-solving found in the first boss fight, which is a much better fit for Dark Moon’s mechanics anyway. The three boss fights encountered in the final stage do incorporate some puzzle-solving elements, but they do not escalate nearly as much as the first boss’s puzzles do, making these fights feel like too little, too late.

Luigi’s Mansion 3’s boss fights are much more consistently enjoyable. One reason why they feel substantially improved this time around is that they are paced far better. The bosses of the first four floors are relatively simple encounters that allow players to come to grips with the core gameplay mechanics. Their attack patterns are limited, their solutions are easily discoverable at a glance, and they can even be made vulnerable through alternate strategies if players experiment. Once players reach the music-themed floor, however, all that stands between them and the boss is a short hallway, and the boss itself, Amadeus Wolfgeist, is a bombastic, multiphase battle with a wide array of attacks that escalate in difficulty. At this point, the game is establishing a pattern of three or so fully-featured floors with a short boss battle at the end followed by a dedicated boss floor with a much more elaborate opponent. This formula sets appropriate expectations for the kinds of bosses players will face, rather than misleading them due to the most complex boss battle being placed at the very start.

The designs of the fights themselves are also a considerable step up from Dark Moon. Nearly all of the fights are fairly traditional, action-packed tussles with a puzzle-solving slant. The degree to which certain fights incorporate puzzle-solving elements can vary, with some leaning much more towards action, but the bosses as a whole do a much better job at consistently testing players’ ability to properly take advantage of enemy and environmental cues. The fight with Dr. Potter, for instance, sees players lure his Venus flytrap into biting one of the overgrown plant buds, which leaves it open to having its stem cut in half by a nearby buzz saw. It can take time for players to figure out the solution, but all of the pieces of the puzzle are immediately visible—the flytrap’s lunging attack, the plant buds, and the buzz saw—it’s up to the player to figure out how those pieces connect.

The Johnny Deepend fight is even more puzzle-focused; the main challenge revolves around figuring out how to get Gooigi to the pool-draining switch on the other side of the room without getting dissolved by Johnny when he spits water his way. Once again, close observation of the environment and Johnny’s behavior are key to winning this fight, which feels in line with the explorative, puzzle-centric gameplay that the Luigi’s Mansion series excels at. Even a more action-centric bout like Captain Fishhook features a hint of puzzle-solving, as players will need to quickly figure out that when the pirate ship starts to tip over, they have to shoot a Suction Shot at the plank to avoid falling into the ship’s gaping maw. Beating a boss through wits rather than brute strength is inherently satisfying, and since Luigi’s Mansion’s mechanics lend themselves well to this kind of experience, it’s incredibly fortunate that Luigi’s Mansion 3 is more willing to explore this kind of cerebral boss design.

A Rumble to Remember

The penultimate fight with Hellen Gravely really exemplifies how valuable puzzle-solving elements can be in a boss battle. For most of the fight, Hellen activates four rotating laser gates in a plus-shaped pattern, and if Luigi tries to capture her with the vacuum, he will end up careening right into one of the gates. To deactivate the laser gates, players will need to take control of Gooigi and head into an underground maze, where four switches await. What ensues is a test of players’ ability to multitask, as they have to move Gooigi to each switch and avoid water streams along the way while occasionally switching back to Luigi to avoid the laser gates and Hellen’s attacks. It’s a wholly unique gameplay scenario that likely would not have come to fruition if Luigi’s Mansion 3 stuck to a more action-based framework with its boss encounters, and what makes it even better is that it feels like a culmination of everything players have learned over the course of the game. Players have been spending hours switching between Luigi and Gooigi to solve environmental puzzles up to this point, and having the penultimate fight essentially be one final test of that core skill makes it a perfect way to finish off the adventure, final boss notwithstanding. It’s almost the exact inversion of Dark Moon; Luigi’s Mansion 3 ends with its best, most intricately-designed boss battle rather than starting with it, and it’s the ultimate sign that the game really understands where its predecessor fell short.

In the end, it’s impressive how much Luigi’s Mansion 3 ups the ante in terms of boss design. Next Level Games clearly learned from its experiences making Dark Moon to craft an eclectic set of beautifully-staged, mechanically-sound boss battles that elevate the experience as a whole. After finishing Dark Moon, it was hard to shake the feeling that it did not manage to reach its full potential in terms of boss design. It is now safe to say that, with Luigi’s Mansion 3, that potential has finally been achieved.