They say you can never go home again, but plenty of old games have found justified new life with a bit of remodeling and a fresh coat of porting paint. Nevertheless, nostalgia often warps players’ perception of a solid foundation. Luigi’s Mansion on 3DS is a perfect example — what at one time felt so mysterious and sprawling now feels outgrown, mostly thanks to a sequel that expanded upon it in almost every way. That the new version strips the wonderful Gamecube launch title of many of the details that made it so atmospheric doesn’t help either, but the difference is still stark in design. With Luigi’s Mansion: Dark Moon, Next Level Games took nearly every aspect of the original and improved upon them, making it hard to live now in what once seemed so comfortable.

Many players prefer the more open, single mansion setting of Luigi’s Mansion over the mission-based neighborhood of creepy castles in Dark Moon, and there’s no arguing that; you like what you like. However, when sticking to any particular location for an entire game, there better be enough personality to keep the time spent there from getting musty. Thanks to the fantastic particle effects and dynamic lighting found in the Gamecube original, the fun-spooky atmosphere serves this purpose, turning the titular mansion into character itself while showcasing an old-fashioned, Abbot and Costello-like horror charm. Dust seems to cover every surface, kicking up when Luigi scampers about, and even floating in the air, as if disturbed after centuries of lying inert in this ancient tomb of a house. Shadows extend out from Luigi’s flashlight, growing larger and more ominous, constantly shifting with each step he takes to effectively distract the player with eerie movement. 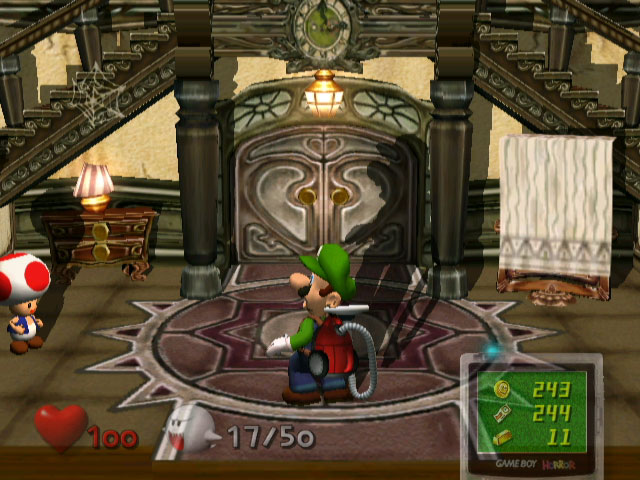 The Gamecube’s mansion went for faded, ancient, musty. The 3DS goes for yellow.

Tension is built on atmosphere, and Luigi’s Mansion does this wonderfully on Gamecube. The uniqueness of the vibe greatly compensates for some fairly repetitive gameplay, a lack of variety in enemies and scenery, and a straightforward, short campaign; like a shrewd homeowner, the game masks its flaws behind its creepy facade. On 3DS, however, a spotlight is shone on the walls, exposing every crack and blemish, and instead of a haunted mansion, this place now just feels like a house with some less-translucent ghosts in it. The Spencer mansion this ain’t, and the playful tension that makes the original so engaging is gone; here the green plumber seems to just go through the awkward motions.

Contrast that with the rich and diverse settings in Dark Moon, where in addition to a classic haunted house, we also find the overgrown Haunted Towers, whose lush (and deadly) plant life spices things up. There’s also Old Clockworks, where mechanical ruins are covered in a layer of sand that hides ghostly mummies. And what about Secret Mine, with its snow-covered chalet, ice pond, and fish house lying atop the remnants of a gloomy, mysterious mine? Dark Moon makes up for graphical power with amazing art direction that constantly instills a sense of wonder about the dark (for Nintendo) history of these places. Sure, they may not all have the spooky vibes some fans wanted, but the game is stuffed with even more mystery, even more possibilities for imagination to take over. 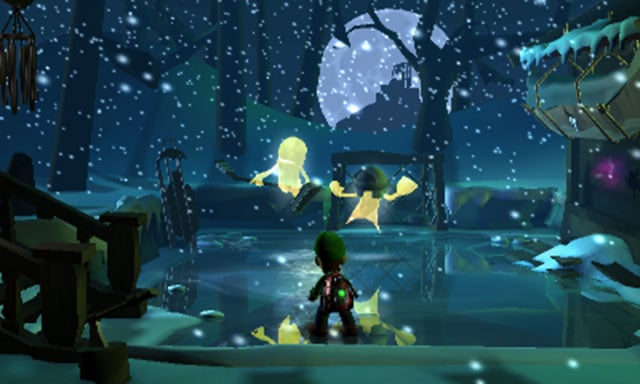 It can still be spooky out of the house.

It’s also stuffed with things to do. These are video games after all, and as far as that goes, Luigi’s Mansion has pretty much just one activity: catch ghosts. Yes, sometimes there is a trick to doing this — like spewing yarn balls at Nana — which can make certain portraits more interesting than others, but the basic loop remains. There isn’t much to explore, and not all that much to interact with; for what once seemed like a living environment, the mansion now feels kind of dead. Dark Moon, on the other hand, lets Luigi’s updated Poltergust affect nearly everything with its suction, and most rooms are loaded with fabrics and cobwebs, chests of drawers and side tables, ceiling fans and chandeliers that can be manipulated, often to discover hidden riches.

There are also plenty of environmental puzzles that involve not only the vacuum, but the new Strobulb and Dark Light as well. From revealing footprints or Boo trails to activating flash-sensitive gates, players are more encouraged to pay attention to their surroundings, something crucial to immersion. It’s also crucial to amassing wealth, as some of the craftiest puzzles involve finding lost gemstones scattered through each manor, and every painting or ornate rug offers the chance striking it rich. 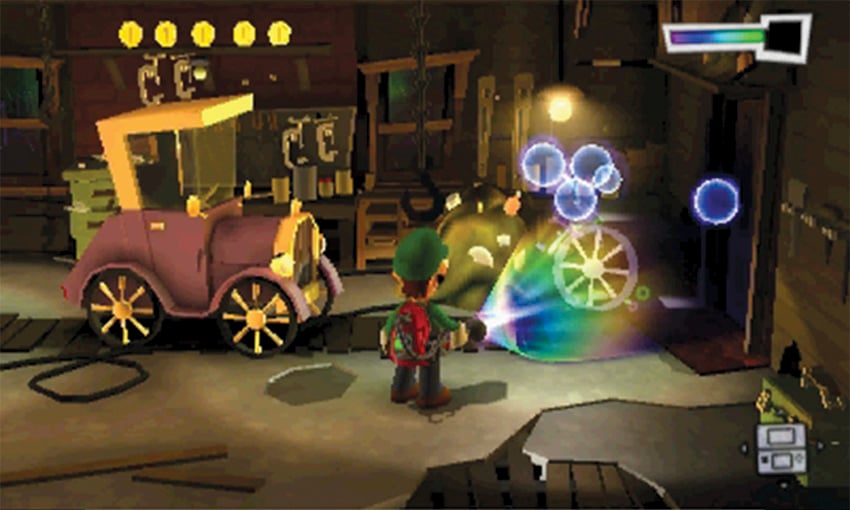 This is all to say that design has come a long ways since Luigi’s Mansion made its debut in 2001, and Dark Moon‘s 2013 gameplay simply holds up better, making it hard to go back. Next Level took the ideas of the first game and made such great strides forward that the original almost feels like a beta now, a proof of concept in comparison with its more refined sequel.

Of course, there will be be those who disagree (listen no further than the NXpress Nintendo Podcast review for example), but outside complaints involving Dark Moon‘s multiple relos or its constant booting of players back to E. Gadd’s laboratory, Luigi’s Mansion seems to have reputation built more on fond memories than current relevance. Some houses are classics, some are just old; the good old days can be nice to revisit, but in this case, I wouldn’t want to live there.