In 2001 and 2002 a myriad of Nintendo fans had their first exposure to Fire Emblem thanks to the platform-fighter Super Smash Bros. Melee. Two of the playable characters, Marth and Roy, were the playable protagonist from different games in the series. Marth was the lead of the very first Fire Emblem title, and Roy was put in as an advertisement for the upcoming Fire Emblem: Binding Blade. The overall positive feedback Nintendo received for these two characters outside of Japan prompted them to begin work on localizing the game that came after Roy’s, which was simply titled Fire Emblem everywhere outside of Japan.

The story of Fire Emblem is probably one of the longest in the series’ history. It’s divided into two parts, with the first one being a glorified tutorial that introduces the basic mechanics of the game. This section of the game follows Lyndis, a young girl raised by the nomadic Lorca tribe of the Sacae Plains. She meets the player character, a tactician, and from there she’s lead on a quest to meet her blood-related grandfather, the Lord of Caelin, when two knights representing the country approach her to tell her she looks much like the late Lady of Caelin, Hausen’s daughter and Lyn’s mother. Lyn’s story, separate from the second part of the game and is its own contained narrative, doesn’t feel superficial. Despite being the “tutorial,” the beginner tips can be avoided by selecting the harder difficulty, available after clearing the game once. There’s also the option to skip Lyn’s story entirely after clearing it once, but the characters she can recruit carry over their levels and stats into the second half of the game which, more often than not, will be better than the base stats they receive without doing her section. 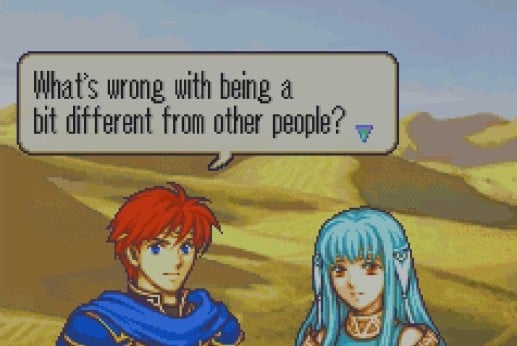 The second part of the game is split between Eliwood and Hector, two other young lords from countries neighboring Caelin. Initially, only Eliwood’s story is available, with Hector’s being unlocked after finishing Eliwood’s. Eliwood’s story follows the lord’s quest to locate his missing father, Marquess Pherae. Behind the scenes of the Marquess’ disappearance is an organization known as “Black Fang,” a conspiracy that encapsulates the various lands around the Continent, and other greedy lords that wish to use Black Fang’s arcane powers to conquer the lands. Hector’s story is roughly the same, with a few extra chapters thrown in and the point-of-view changed to follow him instead of Eliwood.

Where Fire Emblem‘s storytelling really shines is in its characters rather than its plot. Hector in particular makes for an interesting leading lord. Many of the altered scenes for his path involve his own struggle against the ideals of his brother Uther, the current marquess of his homeland of Ostia. His brash and upfront nature makes him a good foil for the calm and collected Eliwood, as well as the sharp-witted Lyndis. Several side characters also get some nice attention in the game’s in-between scenes. Many of the Black Fang’s higher ups are at odds with each other, dividing them between the original leader, Brendan Reed, and his second wife, Sonia, which creates a good dynamic. Exploring the many facets of the story brings about a narrative that’s full of a lot gray-morality rather than one that is purely black or white. 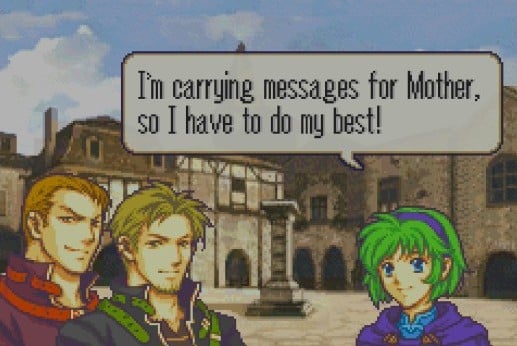 The members of Black Fang come in all shapes and sizes.

Even characters not featured in the between-level scenes are thoroughly explored, if the player is up to the task, through support conversations. Originally introduced in the previous game, Binding Blade, support conversations are events triggered between characters if they’ve spent enough time next to each other on the battlefield. The content of the conversations varies, but they all ultimately reveal traits and characteristics that would otherwise be over looked in the game’s immense +40 playable cast. This is a very interesting system, as a lot of characters have very little to do with the main plot outside of being a retainer of the one of the three lords, but the support conversations can make them into memorable members of the cast. It’s very easy to get attached to particular units after learning their quirks and backstory. Each of these backstories then helps to create a thriving world within Fire Emblem. Support conversations do give in-game stat benefits depending on the characters involved, but they are more likely to be remembered for stories they tell. 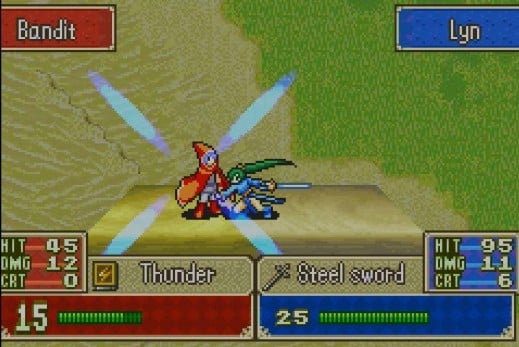 The sprite work still looks pretty solid to this day.

Mechanically the game is simple, at least compared to other Fire Emblem titles. Much of what is does was already introduced in earlier entries, and there are no real gimmicks to movement or characters outside of what stats are tied to their class (i.e., assassins are fast and have high crit rates; knights are slow but have a lot of HP and strength). It puts a lot more emphasis on tactically outthinking the computer and finding the most effective way to use your team’s limited numbers against larger armies. The biggest gameplay draw for the game is its Weapon Triangle system. Originally introduced in Genealogy of the Holy War, the Weapon Triangle is a pseudo-rock-paper-scissors match that can help turn somewhat bad fights slightly in the player’s favor by giving them a higher hit/dodge rate against weapons weak to theirs. What Fire Emblem did introduce to the series, however, was weather conditions. Certain units move better than others, depending on the circumstances, which can greatly alter how one approaches specific chapters, such as using weaker flying units or thieves to scout ahead while staying out of the open. 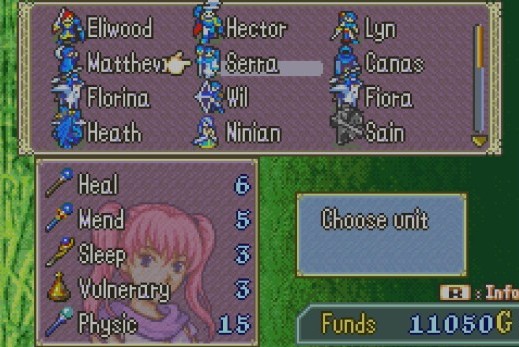 But did I mention there’s a lot of characters?

Fire Emblem is a solidly built game with a good narrative and very strong character and world building. Despite being well over a decade old, the game has aged very well and still stands up as a strategy RPG. Its large cast is fully explored through the game’s support system, building memorable and enjoyable characters. As a sequel to Binding Blade, Fire Emblem did not introduce a lot of new elements, but as a standalone title in the West, Fire Emblem was an epic journey. It’s lengthy story, colorful and diverse cast of characters, and “easy to pick up and hard to master” gameplay, makes it one of my personal favorite titles.

Editor’s Note: This article was originally published on March 4, 2016 but we decided to rerun it with the release of Fire Emblem: Three Houses.