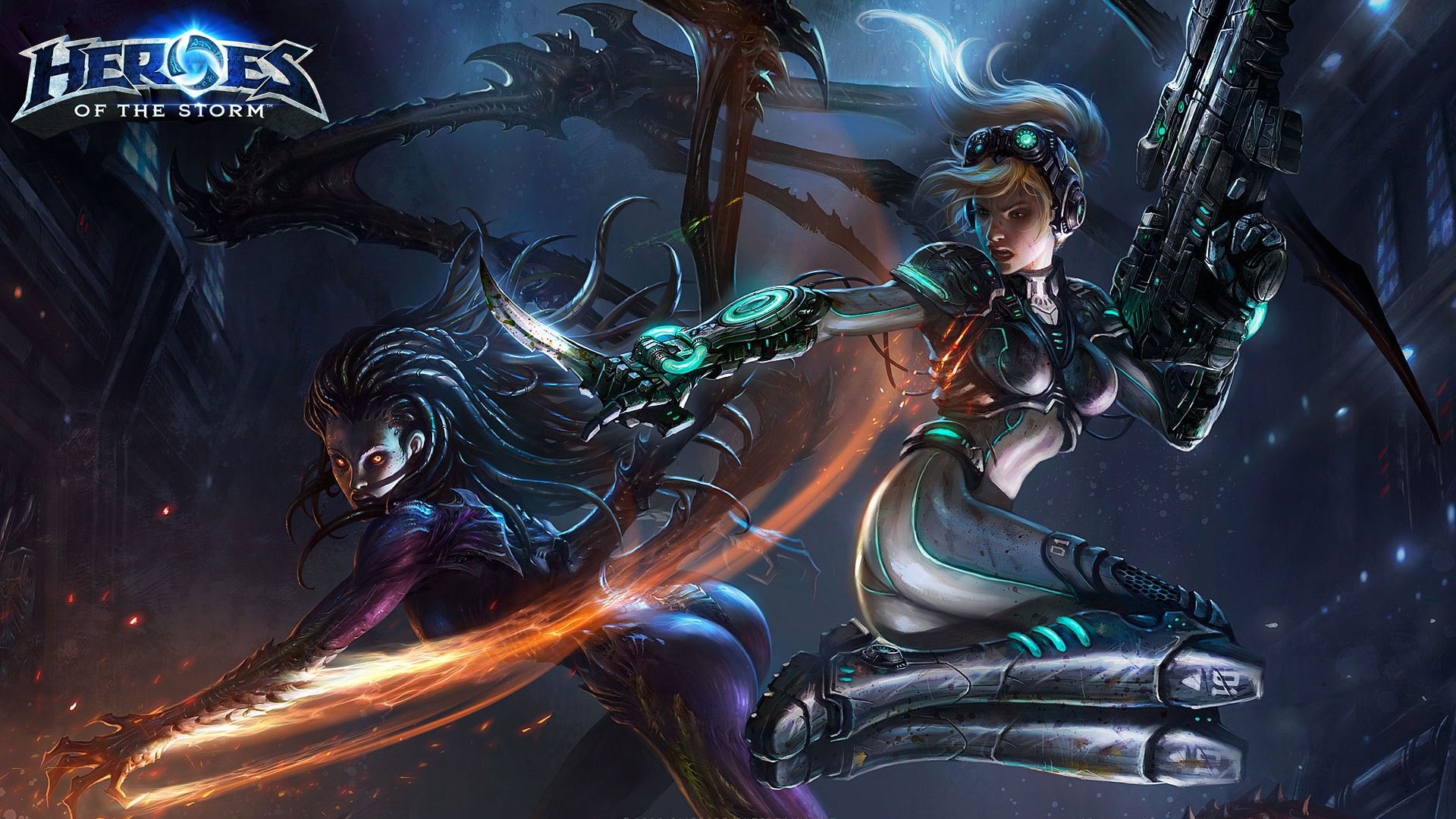 From its humble beginnings as fan made mod for Warcraft 3, the genre of games now known as “MOBA” (short for Multiplayer Online Battle Arena) has taken the industry by storm. The original fan creation, titled Defense of the Ancients (or DotA), pits two teams of five players against each other, each team spawning on opposite sides of the map, with the overall objective of gaining entry to the opposing team’s base and destroying their central building. DotA was the launching pad for a genre of game which now dominates the world of online gaming. Riot Games’ League of Legends leads the pack, with over 27 million unique users logging in to play each day. While no one can come close to League in terms of its user base, Valve’s Dota 2, the stand alone sequel to the original DotA mod, has an impressive following of its own. Since the genre’s explosion in popularity, there have been many imitators, but none have come close to what League and Dota 2 have achieved. Now, legendary developer Blizzard Entertainment, the creator Warcraft 3, is entering fray with a MOBA of their own, titled Heroes of the Storm. 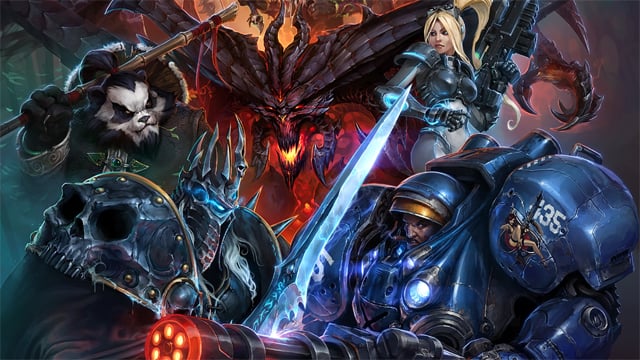 Blizzard’s lore drenched franchises are the perfect backdrop for a MOBA game. Many gamers, both those familiar with the MOBA genre and those with no experience at all, will have immediate interest in the game simply because it gives them the chance to play as legendary characters such as Sarah Kerrigan, Arthas Menethil, and Diablo. All 37 of the games heroes are beautifully rendered, and the game’s overall look and feel are true to Blizzard’s style, while graphically being on par with the competition. The game’s audio, both voice acting and score, is top notch. In typical Blizzard fashion, they’ve crossed all the T’s and dotted all the I’s in terms of presentation, but what have they done to make Heroes of the Storm stand out amongst its competitors? While both League of Legends and Dota 2 have their own unique attributes, both games adhere very closely to the same general outline of how a MOBA should work. Blizzard has taken that outline and made some drastic alterations.

In a traditional MOBA, currency is what drives the game forward. Each individual player is awarded gold for a variety of tasks, they then spend their earnings at the shop to buy items which in turn makes them more powerful, and increases their chances of earning even more gold and eventually over powering the enemy and destroying their base. Players who slay more minions and heroes will have the most gold, and thus be the most powerful forces on the map. With Heroes of the Storm, Blizzard has decided to completely abolish the currency system, and the in-game shop along with it. Players no longer have to worry about securing killing blows on minions, or which items are best to buy for any given situation. Instead, the main focus is on experience. Just as in all other MOBAs, heroes start off at level one, and gain experience if they are near an enemy minion, hero, or structure when it falls. Unlike in other MOBAs however, this experience is not only gained by those in close proximity to the fallen enemy, but shared among the entire team, meaning the team levels up together, and therefore everyone on the team is of equal strength at all times. This system spreads the power out evenly among the entire team, rather than allowing a select few to get too far ahead, or allow those who are under performing to fall too far behind. While this system clearly looks to bolster the “team first” mentality, it consequently does not feel rewarding to players who are outperforming their peers. In a typical MOBA, if a player is performing extremely well, it’s possible that they could get strong enough to carry the rest of the team victory. In Heroes of the Storm, a player who dominates his lane will enter a team fight at the same level of power as his teammate who’s been floundering. The system does a good job of keeping all 10 players relevant throughout all stages of the game, but at the same time it denies strength from the team’s best players. Any player with MOBA experience knows what it’s like to be at the mercy of your own team, but this feeling has never been so thoroughly accentuated as it is in Heroes of the Storm. 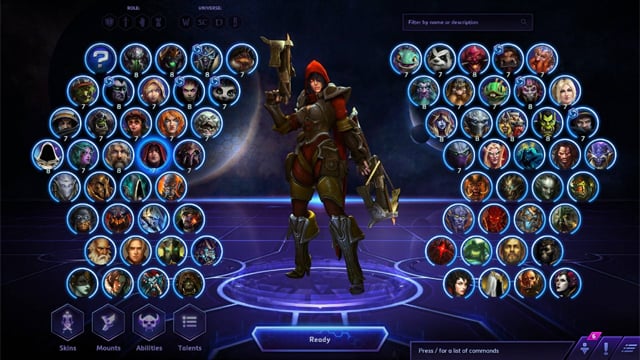 With such a heavy reliance on team work, a team’s composition is crucial. The playable characters in Heroes of the Storm fit all the classic MOBA archetypes, with a variety of tanks, damage dealers, healers and few unique characters who specialize in distinct aspects of the game. Perhaps the best part about each hero is their flexibility. Upon reaching certain levels (1, 4, 7, 10, 13, 16, and 20) within a match the player must choose talents for their hero. Each talent is different, and boosts certain attributes of a character. If you find yourself playing a support role, but your team is lacking damage, you can opt to increase the effectiveness of your damage dealing skill rather than your healing abilities. This doesn’t mean that an assassin character can end up being a bulky tank, but it allows for typically squishy characters to opt for more survivability rather than damage, if that’s what the situation at hand calls for. This level of customization is not on-par with the immense versatility of the item shops available in League and Dota 2, but the talent system in Heroes of the Storm is both complex and deep in its own right, and adds a very satisfying level of strategy to the game.

Blizzard’s heavy focus on team work is most prominently evident in the design of the game’s maps. Yes, maps, as in more than one. Since the original DotA, MOBA games have conventionally had only one map. This tradition is upheld in Dota 2, and while League of Legends has a couple of maps for special game modes, there’s only one map where the main game mode is played. With Heroes of the Storm however, Blizzard has created seven maps, all of slightly varying size and geography. Each of the seven maps has their own semi-unique objective which is crucial to control if you wish to win the game. Each of these objectives are centered around either gathering tokens which drop off of certain minions, or controlling certain parts of the map, king of the hill style. Every few minutes the announcer will declare that a battle over an objective is about to begin, and a signal will go off on each players mini-map showing them where they need to be if they intend on stopping the opposing team from gaining control. The maps in Heroes of the Storm are smaller than those of League and Dota 2, and each player has access to a mount which grants them high traversal speed, meaning players are never too far from the heat of battle. The small maps in conjunction with the heavy focus on objectives, which spawn early and often, results in teams grouping up for massive fights as early as 3 or 4 minutes into a match. Blizzard has essentially done away with the laning phase seen in other MOBAs, and starts each match off in the team fighting phase. It is seldom worthwhile to outright ignore an objective in favor of simply pushing a lane, since the team who gains control over the objective will most likely be rewarded with the quick destruction of several enemy structures, and thus a substantial boost in experience. A single player can doom his team by opting to stay in a lane while all 9 other players fight it out over an objective. For MOBA veterans who relish in the strategy of the laning phase, these changes can be quite jarring, yet for those who enjoy the commotion of team fights, Blizzard’s objective-based mentality might be a welcome change of pace. 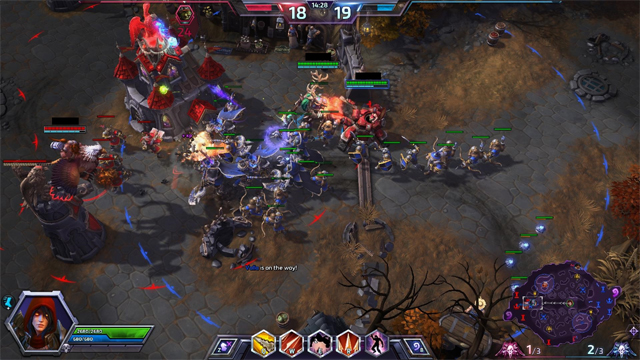 While some will claim Heroes of the Storm is a dumbed-down version of its contemporaries, others will applaud the game for trimming some fat, and creating a more streamlined experience. The simple fact of the matter is, both sides are correct. Blizzard has intentionally stripped away many of the things which raise the bar of entry, making Heroes of the Storm the most accessible MOBA on the market. For anyone who is inexperienced in the genre, there is no need to fear an item shop with hundreds pieces of gear, the art of last-hitting can be ignored, and the pressure of the laning phase is alleviated. For players who are well versed in MOBAs, and want a game which peels away some layers while remaining focused on teamwork and coordination, then HotS will be a perfect fit. Also an interesting factor: matches in Heroes of the Storm routinely last 20 minutes or less, which is a far cry from the 45-60 minute gauntlets that take place in League and Dota 2. There are many people who enjoy the long grueling battles that the most popular games in the genre provide, but Heroes of the Storm will be able to satisfy those who wish to experience the same type of battles in much shorter bursts.

All-in-all, Heroes of the Storm won’t be stealing large portions of either League or Dota 2’s user bases, but it’s an excellent starting point for anyone new to the genre, a fantastic option for groups of people who know they can rely on their friends to carry their weight, and a good alternative for MOBA fans who are strapped for time.