Handheld Zeldas have always occupied an odd place in the franchise, either used for experimentation or farmed out to outside developers who take zero risks. They are rarely revered as much as their console kin (and for good reason), but one such exception is the Game Boy’s bizarre first entry, The Legend of Zelda: Link’s Awakening. No Hyrule, no princess to save, no Ganon to fight; and yet Link’s adventure through the subconscious musings of his own mind (maybe?) feel like a quintessential quest for the legendary hero, exploring a fantastic overworld filled with secret treasures and peppered with dungeon puzzles that cater to some truly unique items with which to solve them. So far, so normal, but somewhere along the development path a Twin Peaks vibe was added, injecting an eeriness and melancholy into the proceedings, making everyone’s motives in this dreamy-haze of a land suspicious, leading to some truly engaging characters and memorable dialogue.

Though the sword-swinging gameplay and often devious dungeons are as fun as ever, it’s the atmosphere created by reckless abandon to convention that really pays off and sticks in the mind. The wall between player and game is broken several times, tossing off meta jokes and toying with expectations, while at the same time delving into existential philosophy and star-crossed romance. Add to that a lesson in capitalism and the barter system, as players will find out via a trading quest that a ribbon is worth the same as dog food, and somehow a bunch of bananas only buys a single wooden stick, and Link’s Awakening encompasses much of the disappointment and confusion that comes with growing up. It turns out that life may not be a dream after all, at least not one that can last, and someday every kid will see their own metaphorical giant flying whale hatch and ruin an idyllic existence, childhood vanishing like a bubble on a needle.

When that happens though, one can always look back on the island of Koholint and its colorful cast to regain that feeling of mystery and wonder at what awaits to be discovered out in the strangest corners of the world. From a shop owner who hates thieves, a mushroom-loving Mario lookalike, chain chomps and a Yoshi doll, to a girl who will never forgive you if forgotten, the world is consistently surprising and charming, even when opining their precarious nature. They all want to live, and thanks to a brilliantly designed game, they still do.

Begun as an unsanctioned “afterschool club” project to test out development for Nintendo’s little portable, Link’s Awakening ended up being one of the most fun, wildly creative, weirdest Zelda games ever made, its quirky personality going on to influence almost every title in the hallowed franchise since, and its status as a classic not to be forgotten forever secured. 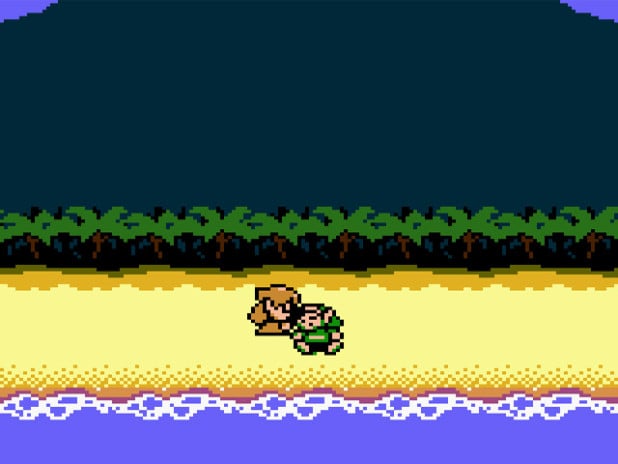