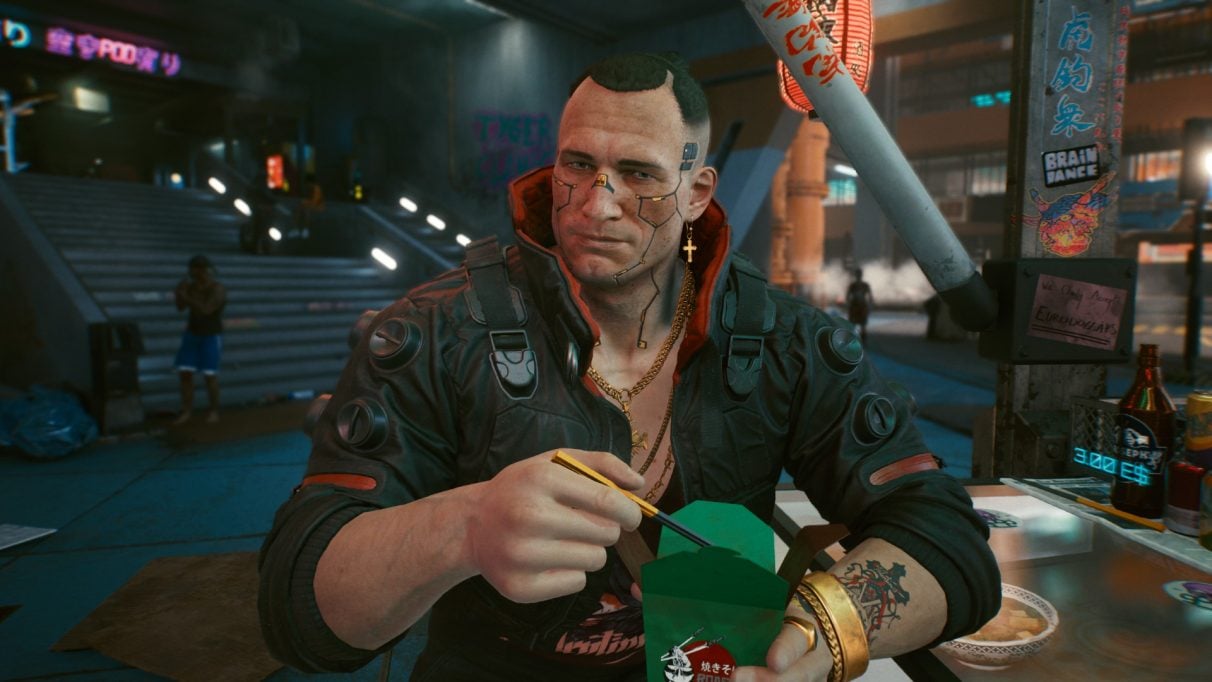 If you were to judge a book by its cover, Cyberpunk 2077 would not withstand well. CD Projekt Red’s thrice delayed game has dominated coverage within games media since its release for all of the wrong reasons. With barely playable base PS4 and Xbox One models and continuously crashing even on next-gen systems, many of its best moments were overshadowed by the litany of technical blunders the title faces. However, when it does manage to work, Cyberpunk 2077 shines brightest as its bombast and spectacle are dialed down and the player is simply given an opportunity to say goodbye to an old friend.

*Please note that the following article contains spoilers for Cyberpunk 2077*

A hardened, but gentle soul, Jackie Welles — one of the first characters the player meets in the game — offers audiences a sense of tangible humanity, which in a society addicted to removing every ounce of that they have left, goes a very long way. When a Biochip heist goes awry, Jackie is left bleeding out in the back of a taxi as it speeds through Night City’s streets. The wounds prove too severe and Welles dies beside the player, leaving V without the single person he could trust.

The player assumes that his death is the last they will hear of Jackie’s character — narratives within many games have conditioned us to think that when a character is gone, they are gone for good — until an incoming call from his mother invites the player to his Ofrenda, a typically Mexican tradition where sentimental objects are placed to welcome the deceased to the afterlife. Realising V has nothing to present at the ceremony, Jackie’s mother advises him or her to take a look around her son’s garage to find something that would connect the two, and it is here where Cyberpunk 2077’s heart begins to show.

Joined by Mysty, Welles’ grieving girlfriend, the player explores the garage, searching high and low for an offering suitable to use. After anecdotes of Welles’ devotion to his motorbike; his love for his gymnasium; and the baseball glove that a fellow Heywood native gifted to him once he had made it to the big leagues, V and Mysty find the keys to Jackie’s true sanctuary.

Once inside, sitting alone on the worktop, is a belt. Easily missed if the section is rushed, once V interacts with the object, Mysty recounts a harrowing tale that gives an entirely new context to Jackie’s character, and what drives him. In his younger years, Welles came home to find his father beating his helpless mother with that very same belt. After taking it off him, and banishing him from his life forever, Jackie used the belt to serve as a reminder as to what he never wanted to become. If he ever saw his father again, that same belt would be used to inflict to him the same pain and turmoil inflicted upon her.

After hearing that story, the belt seemed like the only item that Jackie would want with him by his side. A witness of domestic abuse from a young age, the object gives an insight as to why Jackie turned to a life of crime. He wanted better. He needed better. Not just for himself, but for his family. The destruction that his father brought to his life was reason enough to work towards something greater than what Jackie had known. While his methods were not always commendable, his motivations were, and in spite of the numerous crimes he had committed, and lives he had ended, Jackie was always coming from a place of wanting more for those that he loved.

Despite being set in the future, the story of Jackie’s belt in Cyberpunk 2077 humanizes not only his character, but the world of Night City that V, and thus the player, inhabits. Behind the facade of the technologically obsessed society exist human beings with real emotions and even more real faults. From that moment on, the player feels no choice but to play the game differently. If you opt to be another pawn on the chessboard, giving in to the corruption, and sleaze of society, you will fade into the background like you were never even there to begin with. However, if V chooses to bring humanity and morals to his or her decision making and actions, the player will be able to uncover a hidden truth in that everyone is in this same hellhole together.

For all of its flaws, of which there are many, moments like these make Cyberpunk 2077 a worthy experience. It is unfortunate that the game was marketed so heavy-handedly, and aggressively, promising a neon-dystopia with endless possibility. It is almost ironic then, that its true flourishes of brilliance come when Night City is stood still, if only just for a second.