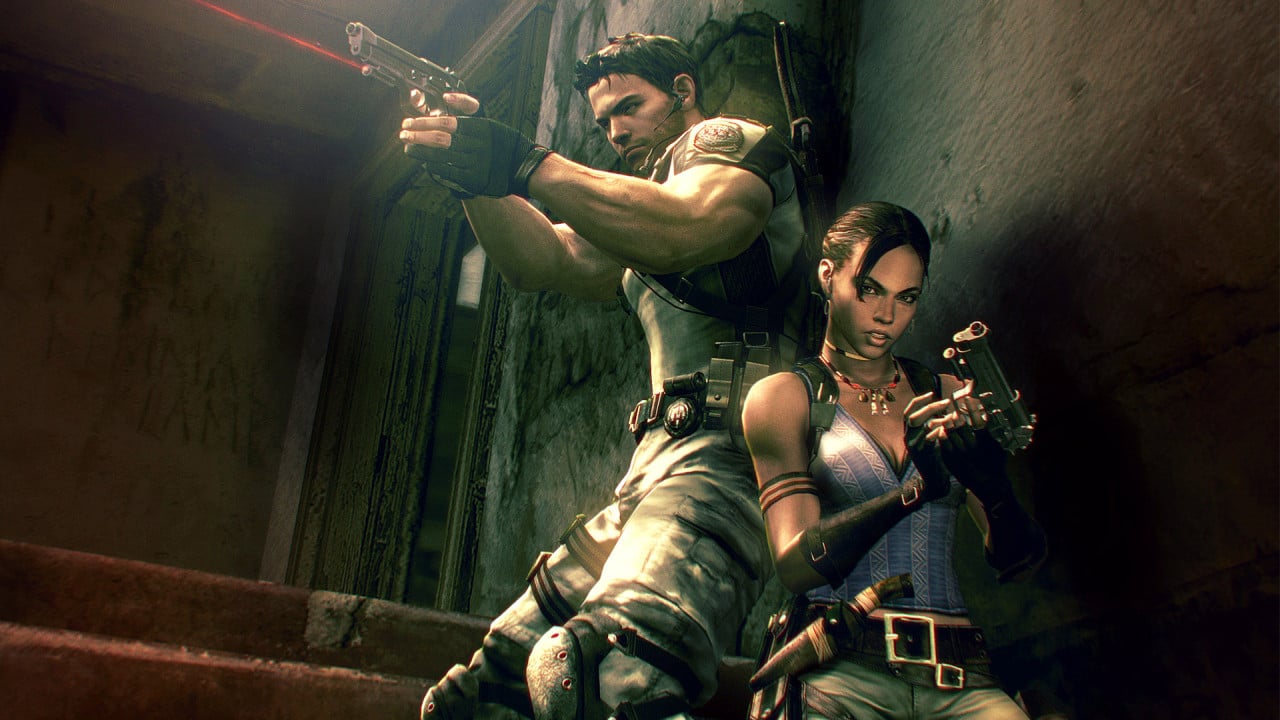 That’s what Capcom had four years to figure out. The result of their hard labour? Resident Evil 5, a game as lauded as it is criticized, and what has been referred to as one of the best Resident Evil games and one of the worst. Let’s take a look back at what it did right, what it did wrong, and why it’s earned such a weird reputation in the RE fandom. 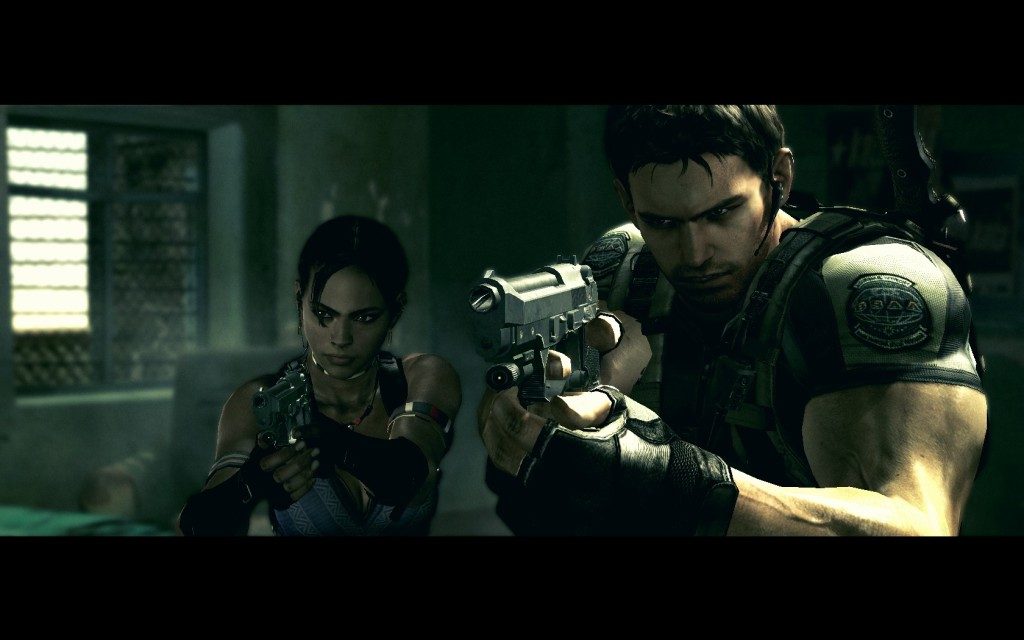 There is a lot that RE5 does right, some thanks to RE4‘s framework, but if it ain’t broke don’t fix it. First and foremost are the graphics. Simply put this game was stunning when it came out, and even seven years on, it’s impressive for the time. This is easily one of the best looking games for the early PS3/360 era, and only a handful of games really surpass it. Both the in-game graphics and the pre-rendered movies look great, and the cinematography of the cutscenes is fantastic. If nothing else this is an incredibly cinematic game.

Second is the new inventory…sort of. We’ll get to that later. Rather than playing tetris with every item, you’re given nine slots. On controllers, the first four slots are relegated to the D-Pad, but on PC all nine slots are instantly accessible via the 1-9 keys meaning switching between weapons, something you do quite a lot, is smooth and almost instantaneous. Going from your trusty pistol to the sniper rifle in a matter of seconds, rather then opening a new screen, waiting for it to load, selecting your gun, closing the screen, and getting back into the game is an absolute god-send.

Controls are improved too, but again, only sort of. There’s a lot of weird balancing in this game and we will discuss that in a second. Guns feel more responsive then RE4 and aiming is quicker and easier. On the PC version there’s an obnoxious crosshair rather then the laser sight, but at least the mouse works, a nice change from the 2007 Ubisoft port of RE4.

Lastly there’s Irving. Irving is the main villain for the first half of the game, and serves as the half-way point boss fight. He’s also easily one of the most interestingly weird characters in the Resident Evil franchise. He’s goofy looking, he over-acts to an insane degree, he dresses weird, and his voice wanders between second rate Joker impression and bizarre faux-Boston accent. He’s an absolute joy to watch whenever he’s on-screen, and it’s almost a shame when he leaves the game. 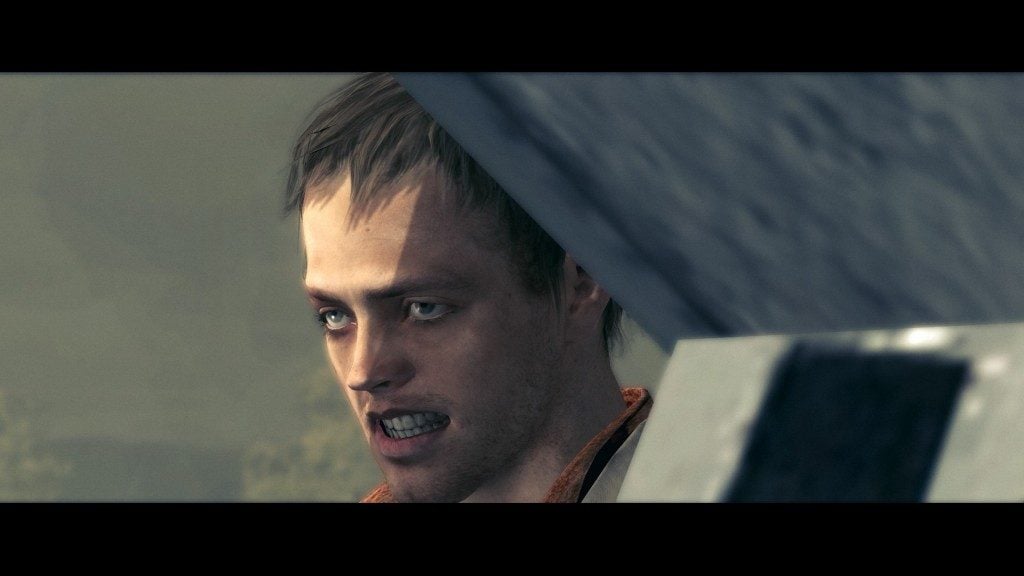 Irving: Best RE villain ever? No, but really, really funny.

There’s no such thing as a perfect game, and of course RE5 is no exception. It makes some truly egregious errors, but we’ll save that for the UGLY section of this article. For now let’s focus on what doesn’t work, rather then what they totally got wrong.

First is the inventory. As mentioned, rather then RE4‘s attache case system you only have nine slots per character, so 18 slots overall. The big issue with this is that ammo, grenades, and health items all of which were much, much smaller and easier to carry then guns in RE4 now take up the exact same amount of space, meaning you can actually get into a situation where you have to choose between picking up a new gun or keeping the ammo for that weapon. Yes, grenades now stack, but health items don’t and ammo does only to a certain point. Trying to carry more than three weapons is a nightmare as you try to juggle ammo, grenades, health kits, and the guns themselves, and the added convenience of quick switching only does so much to remedy this.

Then there’s the tank-controls. RE4 had tank controls, but it used them to heighten the horror experience, often only pitting you against small groups of enemies and forcing you to carefully conduct your fighting. RE5 has a much more action-oriented slant to it, and as such, the tank controls serve as an even greater hindrance than in the previous game. Your characters feel sluggish, and moving around just seems like a hassle. It does manage to heighten some of the more tense moments as you run, turn, and shoot just like RE4, but most of the time, and in the face of other games like the Dead Space series, it just comes off as antiquated and unnecessary. 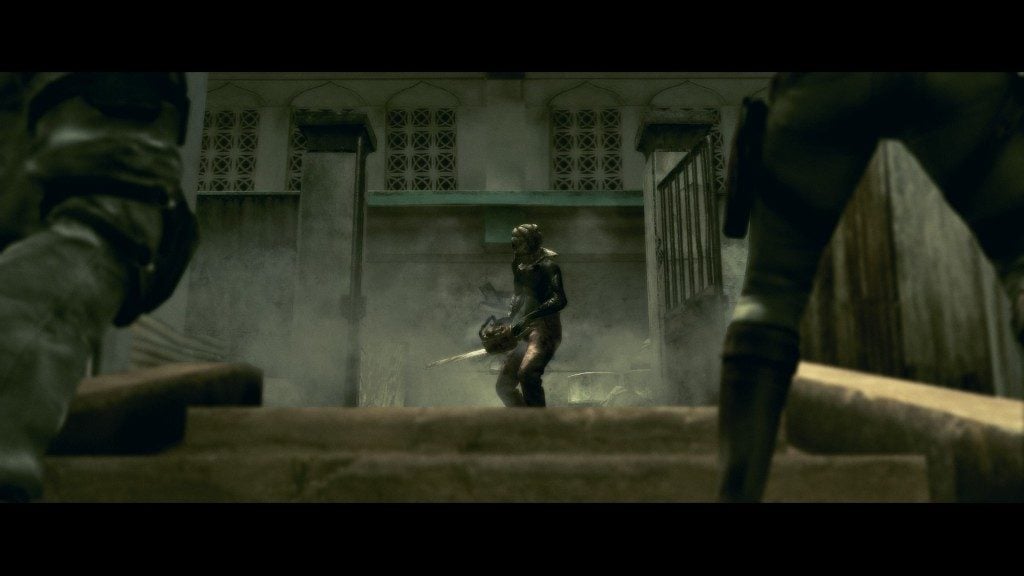 Here’s where RE5 goes completely off the rails, the stuff they absolutely dropped the ball on. First and foremost is the AI. The entire rest of the RE series up to this point, with the notable exception of Resident Evil: Outbreak on the PS2, had been single-player experiences. For some reason Capcom decided that not only did RE5 need to have co-op, but that this feature should be made central to the entire game, to the point where the single-player experience doesn’t play as well without a partner. As a co-op game it plays fine, great even, with plenty of sections that force player cooperation, but the single-player game is abysmal due to the AI running the partner. Giving the AI health items means the second you get scratched they’ll waste precious herbs. Give them a rifle and they’ll stick to their weakest pistol until absolutely necessary. And do not EVER give them something explosive, or you might as well just quit the game. There’s other issues, like how they tend to pick up any mines you lay down, or steal ammo for weapons they don’t even have. It never really breaks the game, but it is a huge turn-off, and adds unnecessary stress when you have to watch yourself and a suicidal moron at all times.

The issue with the co-op focus runs deeper than just poor inventory management though. With two players comes a total re-balance of the game, and while RE4 featured only a few “crowd scenes” RE5 seems to be nothing but. Imagine the iconic village fight from RE4 non-stop and that’s pretty much most of RE5. There are a few quieter sections where you face off against carefully chosen enemies and have to make use of proper tactics, but most fights are just “gun down everything that moves” and move on. This also means ammo balancing is messed up, and it seems like every other enemy drops a mag or two for your weapons, removing much of the tension that comes with scrambling for survival.

Of course, you only have to stand and fight if you want to, since the game’s terrible enemy AI is really easy to fool. Entire fighting sections can easily be bypassed by just running. The game catches on to this occasionally by adding environmental puzzles, and skipping a fight means you won’t get loot, but you also save a tonne of ammo by doing this. You’ll need that ammo too, since RE5 is absolutely uncompromising at times, and surviving some fights takes a superhuman amount of planning and patience thanks to bullet-sponge enemies. 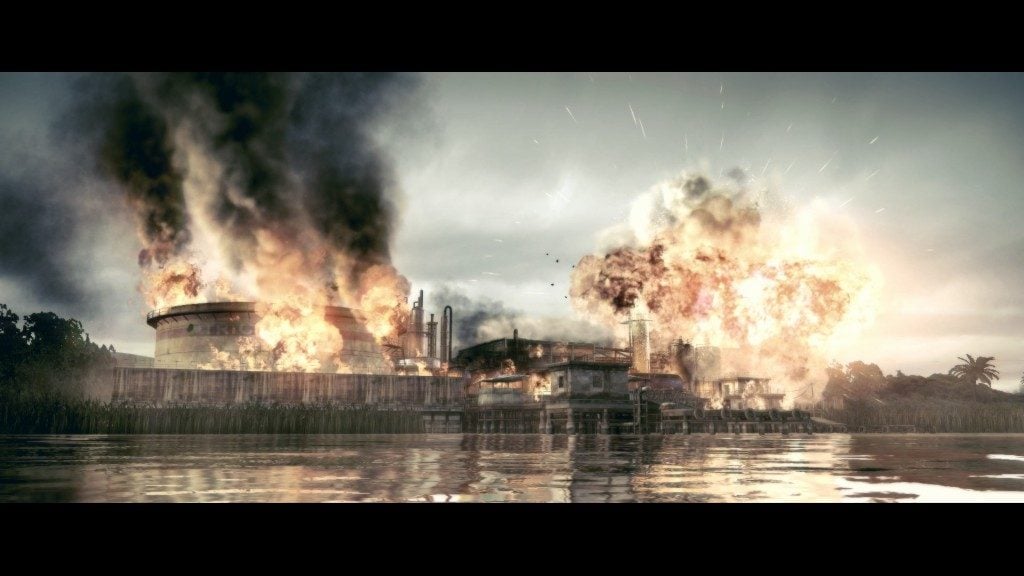 Is there any game in Africa that doesn’t involve blowing up an oil field?

The big problem is this no longer feels like a survival horror game, but it still wants to be. RE5 wants so desperately to be an action shooter like Gears of War 2 or Saint’s Row 2, but feels constrained to its survival horror roots because of the previous games. If the AI was better, if the controls were better, and especially if it played more like other shooters, maybe RE5 could’ve been better. But it’s name brings up sour memories in some series fans, and it’s become one of the more divisive games in the franchise, often showing up fairly low on RE rankings.

It’s worth mentioning for a quick second what a pain it is trying to get the PC version of this game up and running. RE5 was another victim of Games For Windows Live, and as such, the Steam Version is just a bit messed up. There’s a fan patch easily available to fix it, but at this time, more than a year after the death of GFWL there’s no official patch.

At best, RE5 comes across as an attempt to ape RE4, and it does so successfully at times. But so much of the game feels the same as the previous game that it might as well just be a really great DLC. Every truly great or exciting moment, with a few exceptions, feels like an attempt to re-capture RE4‘s majesty, or stuff that had already become stale and common-place within the RE series. There’s giant mutants, wading through sewers, the occasional jump-scares, and completely insane writing. Even when it does do something new it’s just taking ideas from other games, like an on-rails vehicle section, or fighting waves of enemies while waiting for an elevator.

RE5 isn’t a bad game, nor is it even a bad Resident Evil game. When everything lines up right it really does work, and as a co-op game, especially couch co-op, it’s a great experience. But it’s a game without purpose, a worse horror experience than it’s own predecessor, and three years too late to capitalize on RE4‘s massive popularity. It’s a game that doesn’t need to exist and today, it’s only worth playing if you’re a mega fan of the franchise.