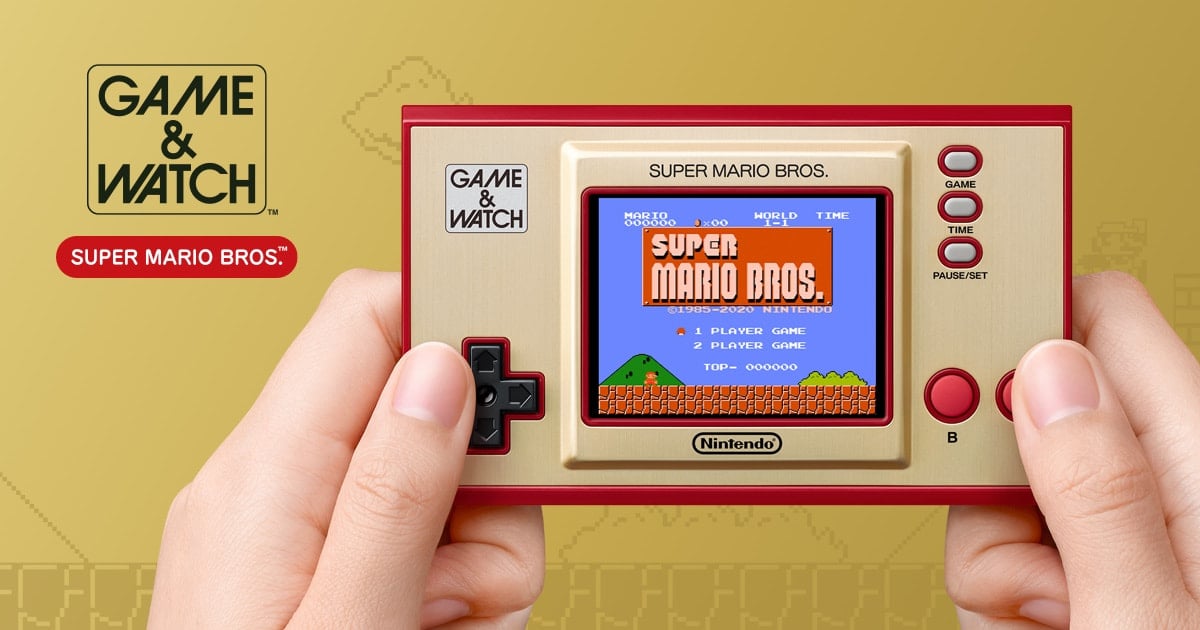 Nintendo makes wonderful toys. Sometimes these toys are lovely diversions, and sometimes they are revolutionary experiences. Nintendo has crafted a spectrum of wonders for most of our lives, and with Game & Watch: Super Mario Bros, they’ve built a delightfully useless and beautiful toy,  a wonderful object that is a love letter to their legions of fans.

The Game & Watch comes packaged in a curiously satisfying box. Compact and colored gold, the box shows a picture of your little Game & Watch displaying the iconic opening screen of Super Mario Bros, surrounded by delightful flourishes from Mr. Miyamoto’s 8-bit world. The first loving detail of so many, you realize that much of what you see is a part of a clear sleeve, and when you slide it off, you reveal yet another homage, to the other game that is packaged inside. The bright red lettering of “Super Mario Bros” slides aside along with the Koopa’s and brick’s, replaced by the simpler throwback to the other game that lies inside, Game & Watch: Ball. The little flap that you greedily open shows Mario and Luigi with their “Game & Watch: Ball” bodies and states simply, “Special Thanks to you!” The note of gratitude feels genuine.

The Game & Watch machine pops out of the box is sharply designed and feels great. It’s got a satisfying little heft to it that feels as though it is built to last. The console design is a throwback to the original Game & Watch that also feels modern, featuring the classic purity of an 8-bit Nintendo controller’s layout. The red A and B on one side of the screen, and the most-welcome classic D-pad to its left, all just a tick bigger than the NES controller, and all pulled together in delicious reds and golds.

And that sleek little screen! Shocking in its effectiveness, you flip it on to find a beautiful display of not only a little Mario running about, but also the time of day, spelled out in perfect 8-bit bricks. The screen is so successful that you may be left wondering, or perhaps even longing, for future iterations of this little delight.

Now, there are few bonafide video games on this little device, and you may even want to play them. The Game & Watch features perfect emulations of the original Super Mario Bros, Super Mario Bros.: The Lost Levels, and a slightly-modified Ball. They each perform just as you’d like. The tiny controller and screen function surprisingly well, though to be sure the big-handed among us will find themselves with cramps. All is as you’d expect it to be in Mario, and the novelty of the experience goes a long way encourages you to smash those koopas one more time. And Ball is a simple and entertaining juggling game wherein the original Mr. Game & Watch’s head has been unceremoniously replaced by that of Mario. It is a fun diversion.

As per its name, the Game & Watch is also a clock. As noted, the time is displayed in breakable bricks, and Mario runs to and fro, dodging goombas and piranha plants as the minutes and hours roll by. Strictly speaking, it is unlikely to replace either your wristwatch or your wall clock, yet somehow, the clock is one of its most alluring features. Watching Mario run about and the big brick numbers tick by on this lovely little screen sparks an unlikely and utterly pure joy that sends a Nintendo heart soaring.

It’s A Secret To Everybody

And yes, kids and cadets, in clever correlation with the Mario Anniversary celebration at hand, there are thirty-five little secrets tied to this little device. Few of them are earth-shattering, or much more than cosmetic, but suffice it to say, they make the already-delightful experience even more fun and special.

Without delving too deep into the sinister land of spoilers, some of the most fun bits happen at certain times on the clock, but in true Nintendo-spirit, there are lots of little gems to unearth. Look forward to “The Mario Drawing Song” getting stuck in your head…

It nearly goes without saying that this Game & Watch is for enthusiasts and collectors. It’s unnecessary, but it is also perfect. This beautiful little machine is, above all else, a giant nerdy valentine from Nintendo to us, and if you are of a mind to enjoy exquisite and useless toys, it’s a piece of memorabilia that shouldn’t be missed. In an unexpected master-stroke in elegant and simple design, The Game & Watch: Super Mario Bros. is not only another wonderful toy by Nintendo – it is a miniature revolution.