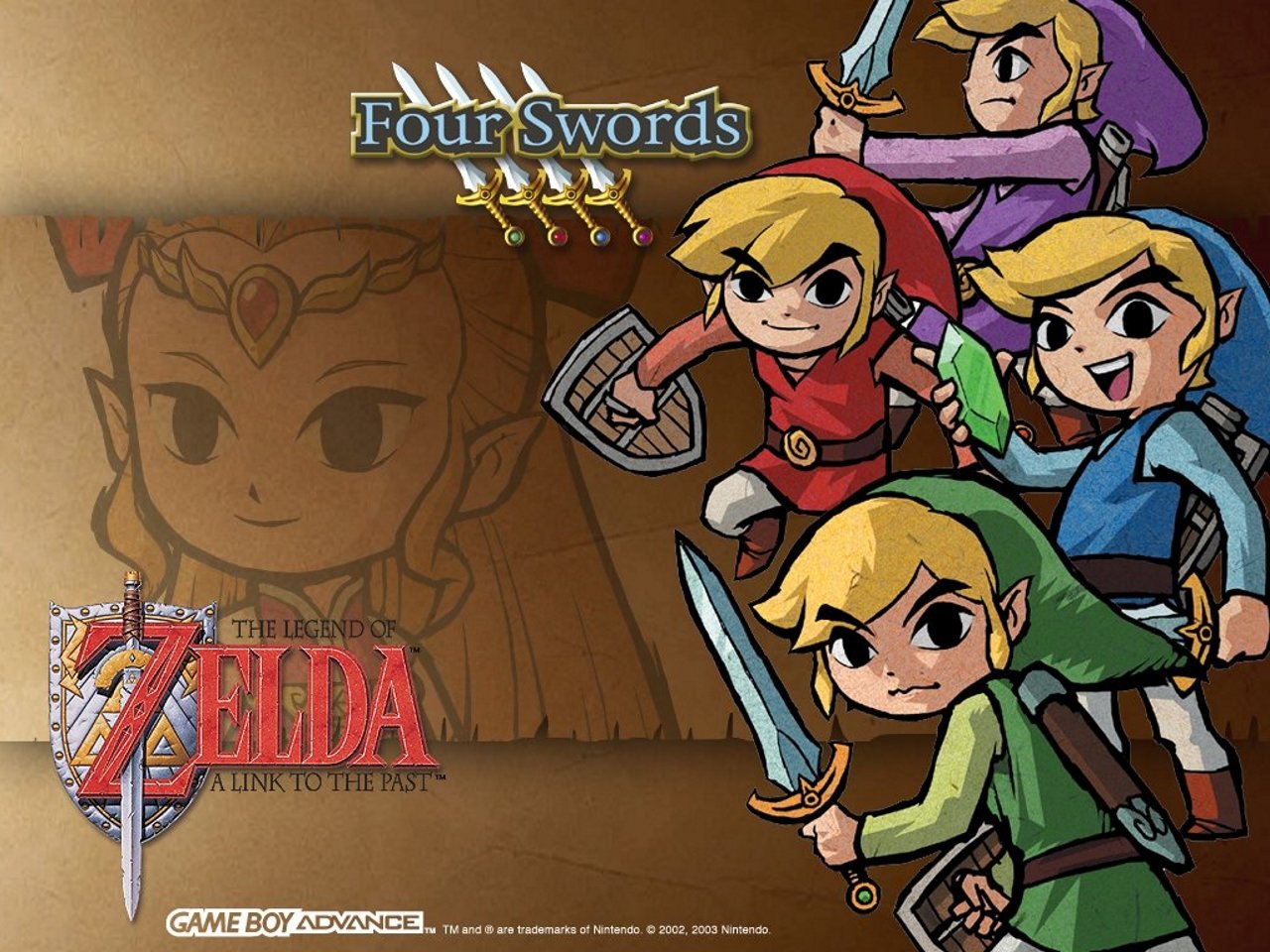 What should have been The Legend of Zelda’s grand foray into multiplayer gaming has become little more than a footnote in the franchise’s history. Developed by Capcom to accompany A Link to the Past’s re-release on the Game Boy Advance, The Legend of Zelda: Four Swords was dead on arrival. Although A Link to the Past sold well enough on the GBA, Four Swords required too many secondary factors to actually play. Unless you had two copies of the game, a link cable, and a friend to play with, Four Swords locked itself at the title screen. For most Zelda fans, this is where their Four Swords adventure began and ended.

Nintendo hasn’t made playing Four Swords any easier since, but there was a brief period of time on both the DSi and 3DS where Four Swords Anniversary Edition was available for download. The game has since been removed from all Nintendo storefronts and will likely never return at this point, but those who had the luxury to download Anniversary Edition have access to a fully single-player Four Swords experience. Whether or not it’s any good is another matter entirely. The Anniversary Edition might touch up the gameplay while adding in new stages, but Four Swords was always weaker than its predecessors on a design level.

Despite being propped up as the ninth mainline entry in The Legend of Zelda, it’s immediately clear that Four Swords doesn’t have half as much polish as earlier titles nor does it use its core mechanics all too well. Albeit set in Hyrule, Four Swords is the first game in the series not to feature a fully explorable overworld. Rather, players select from one of three stages at the start of a run, with a fourth unlocked once all levels have been cleared. Every stage then randomly selects two maps out of a set followed by a fixed boss, ostensibly serving as the closest thing Four Swords has to dungeon design.

Just conceptually, this gameplay loop fundamentally undermines what generally defines The Legend of Zelda. Segmented level design not only means Zelda’s spirit of adventure is gone, the non-linear structure coupled with randomized maps hold back puzzle design considerably. One major consequence of this shift in priorities is that Link can no longer freely select or keep equipment anymore. Aside from the Four Sword, each Link can only hold one item at a time– beginning every map with their Shield equipped. Items appear as needed, always in proximity to their puzzles, and players are expected to rotate periodically throughout stages.

Such an approach to item design should encourage puzzles that actively build upon the items players are using. In practice, Four Swords’ puzzles rarely go beyond the surface level. Capcom went from stuffing the Oracle games with some of the most complex 2D challenges in Zelda to obstacles that barely qualify as brainteasers. This is especially a pity because Four Swords features an otherwise inspired tool kit.

The Gnat Hat is a clear precursor to Capcom’s work with The Minish Cap. Per the Hyrule Encyclopedia (p. 263), “Director Hidemaro Fujibayashi dreamed up the Gnat Hat after Shigeru Miyamoto said he ‘wanted to play with getting inside treasure chests and make mischief.’ Fujibayashi wondered, ‘What about an item that makes Link small?’” This idea may have been ultimately realized in The Minish Cap, but Four Swords never uses the Gnat Hat for anything other than basic traversal.

At most, Link will shrink down to step on a small platform or pass through a small tunnel– functioning more like Link’s crawl from the 3D games than anything elsewhere. There are no chests to play inside and even less mischief to be made. The Roc’s Cape and the Magnetic Glove also return from Oracle of Seasons but noticeably downgraded.

Along with Link now unable to attack while jumping (removing an important layer to 2D combat the Game Boy Zelda games had developed through the Roc’s Feather & Cape,) the Magnetic Glove has lost most of its capabilities. Gone are the days of magnetizing enemies away and carefully maneuvering yourself over bottomless pits. Players can now only magnetize other Links, trading in Oracle of Seasons’ bottomless pit magnet puzzles for simpler alternatives. The Roc’s Cape doesn’t fare much better in this regard either, the level design rarely calling for Link to double jump. It’s not even as useful for dodging anymore due to stiffer jump controls.

BowWow from Link’s Awakening makes an odd reappearance as an item that attacks enemies on sight but is nonetheless an underwhelming reminder of a better game. Several series mainstays return as well– the Bombs, Boomerang, Bow & Arrow, and Pegasus Boots– functioning identically to previous iterations. There’s a genuinely strong set of items here, but Four Swords simply doesn’t prioritize puzzles. More importantly, the stop & swap approach to equipment prevents the gameplay from ever fleshing out concepts. Other Zelda games introduce an item with an introductory puzzle and then typically dedicate a dungeon to said item with increasing harder challenges throughout. In Four Swords, items appear to be used and subsequently thrown away.

When it comes down to it, the real core of Four Swords’ gameplay loop isn’t exploration, puzzle-solving, or even combat– it’s Rupee hunting. The goal of each stage is to collect as many Rupees as possible. The first time players complete a stage with at least 1,000 Rupees, they’ll be given a Silver Key. From there, higher-tiered Keys can be obtained by replaying completed stages & gaining even more Rupees. The Golden Key requires 3,000 and the Hero’s Key 5,000. These Keys are used to unlock three doors in Vaat’s Palace, each offering a different variation of the final dungeon.

Unfortunately, this is yet another example of Four Swords failing to use an idea properly. In theory, Keys encourage replayability and their tiers serve as a soft ranking system– rewards for proving your mastery of a stage. In practice, however, Keys are a testament of your patience to grind & nothing more. In single-player, at least. Multiplayer features a mechanic called Rupee Fever, which is triggered when all Links are at full health. All Rupees picked up under Rupee Fever are doubled in value, making this the only way to get the Hero’s Key without grinding. The Anniversary Edition removes Rupee Fever if you’re playing alone, forcing you to grind off respawning enemies.

Not a single stage in the game has the 5,000 Rupees needed for a Hero Key’s, meaning roughly one hour of game time will be spent killing fodder enemies for low value Rupees– 20 minutes per stage, give or take. This isn’t even taking into account Rupoors, Four Swords’ grand addition to the Zelda economy. Rupoors are black Rupees that drain money when picked up, only safe during a Rupee Fever (which, again, doesn’t exist in single player.) It’s not enough to tediously scour every inch of each level for Rupees because there will never be enough. At the same time, it’s a necessary practice to mitigate grinding– in itself its own hell.

What’s perhaps the most frustrating aspect of the Anniversary Edition is that it’s an otherwise very thoughtful reinterpretation of an exclusively multiplayer game. You control two Links at once when playing solo. Player 1 is always Green Link, but you’re free to choose his partner’s color. L & R swap between both Links during gameplay while X regroups. Both Links will move together when regrouped, but split when swapping– the uncontrolled Link sitting idly by. The Links will attack in unison depending on the enemies they’re fighting, you can pick up & toss idle Links, and the fact each Link can only see their respective color during certain boss fights makes for the only real bit of thought-provoking gameplay in Four Swords.

The Anniversary Edition also features brand new stages via the Realm of Memories– a gauntlet of maps inspired by previous 2D Zelda games– and the Hero’s Trial, what is ostensibly Four Swords’ hard mode. For what they’re worth, these maps are a step up in quality from what the main game offers. Considering unlocking the Realm of Memories simply requires completing the game once (a process which takes little more than an hour even on a first playthrough,) Four Swords isn’t the worst way to kill an afternoon. That said, the Hero’s Trial marks a significant enough spike in difficulty where inexperienced players will likely die often.

Grezzo’s efforts to punch up Four Swords are commendable, but even beyond the foolish decision of removing Ruper Fever from single-player, the Anniversary Edition’s foundation is just sloppy. Four Swords is arguably the worst game in the mainline Zelda franchise. That it’s a mainline game at all considering its lack of quality and content in comparison to previous entries is baffling. As a multiplayer add-on to A Link to the Past’s GBA port, Four Swords is fine if wholly inaccessible. As a single-player experience in Anniversary Edition, Four Swords is a miasma of tedium & fan service that’ll gradually wear out its welcome. Playable, but hardly compelling.

Calling Four Swords a failure outright would be unfair, but Grezzo’s Anniversary Edition highlights design flaws that were always present– in many cases emphasizing them with no co-op to serve as a distraction. Four Swords is a game unrecognizably Zelda, settling for surface-level gameplay more often than not. The Legend of Zelda is a franchise that can pride itself on consistently high quality, but Four Swords is a clear outlier. All the same, the game’s development was not for naught. Capcom’s next & last Zelda– the Minish Cap– is a considerably better game while Nintendo’s own attempt at the concept– Four Swords Adventures– offers a far richer single-player experience with stronger level design & puzzles throughout.

As a Zelda game that’s no longer available for download on any of Nintendo’s stores, Four Swords Anniversary Edition naturally has an allure to it. It’s an obscure piece of Zelda history and a rare instance of a multiplayer game being remade with single player in mind. What players are left with, however, is a side-game Capcom always knew was playing second fiddle to A Link to the Past. Those who own Four Swords should be glad they have access to a Legend of Zelda time capsule. While those who don’t should be grateful they don’t need to suffer one of the worst games in the franchise.

Four Swords Anniversary Edition does add solid post-game content to its credit, but it’s at the expense of making a repetitive game tedious for those who need to play alone. It isn’t enough that Four Swords is nearly impossible to play single player– the experience is mechanically worse. Arguably worse is just how insignificant Four Swords feels. Despite introducing a new mystical blade, a brand new antagonist (with a history,) and billed as the earliest game in the series’ chronology at the time, Four Swords does with its story & lore exactly what it does with its puzzles: nothing beyond the introduction. In spite of a celebratory remaster, what should have been The Legend of Zelda’s grand foray into multiplayer gaming has become little more than a footnote in the franchise’s history– and deservedly so.