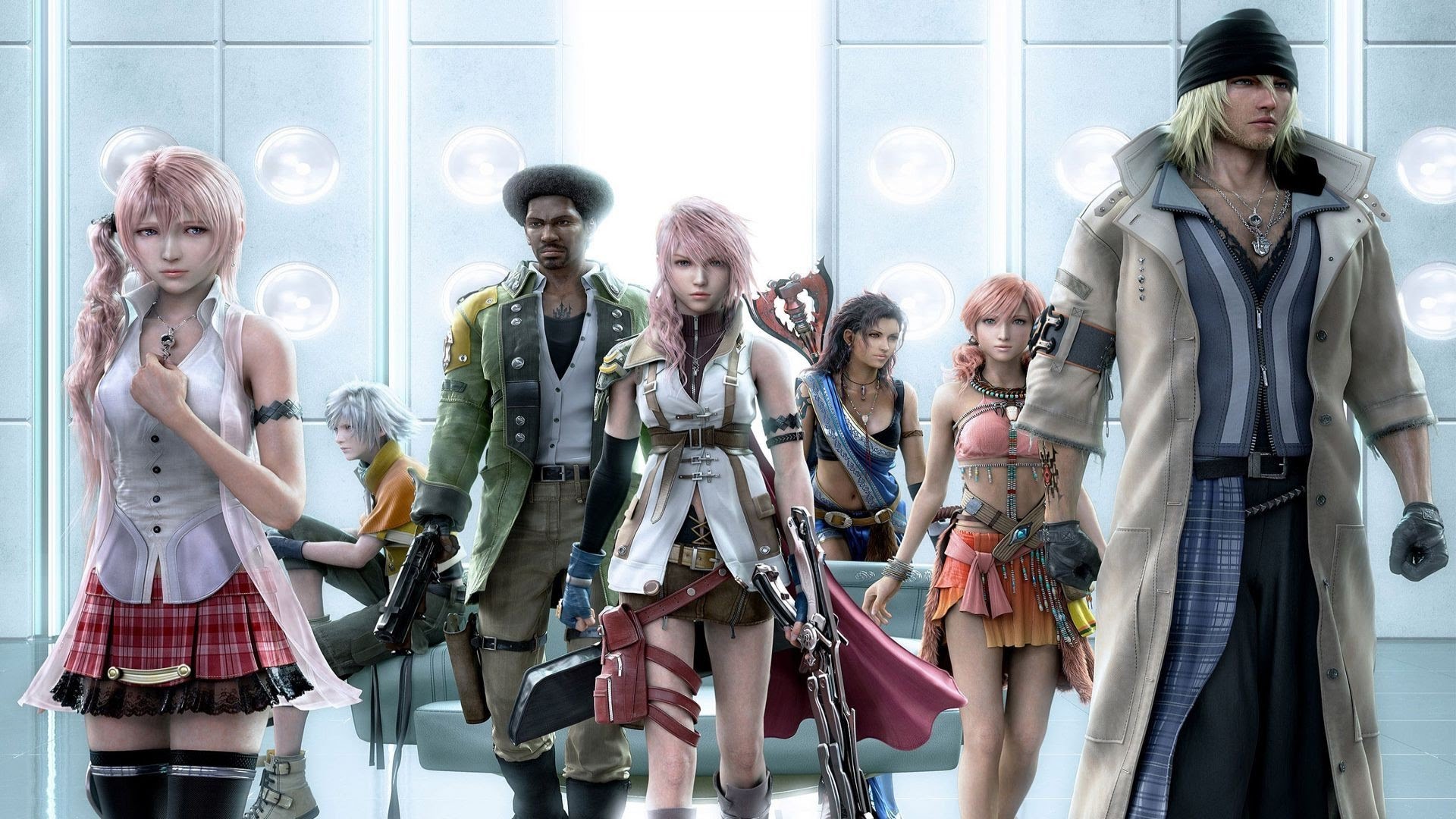 Six years ago, Square-Enix were finally ready to let out the big dogs for the new generation. As their first major title for the PS3 and Xbox 360, Final Fantasy XIII was the game that was going to show everyone what the most legendary RPG developer in the industry could do with this new horsepower. Unfortunately, things didn’t go exactly as planned.

Few games have suffered the abrupt turnaround in support and acclaim that Final Fantasy XIII has. What was announced as the harbinger of the “Fabula Nova Crystallis” project (good lord, that name) was seen largely as the most ambitious project Square-Enix had ever had the audacity to undertake. The trailers were jaw-dropping, the characters were cool, and the dynamic new battle system looked to give the series a real kick in the ass.

Even when it finally arrived, the game received pretty solid scores across the board, with a Metacritic rating that still stands impressively above the 80 mark. In fact, only a few scarce outliers gave the game a single negative skew, and even those publications hovered around the middle ground of the 5-6/10 territory. Final Fantasy XIII was also a hit in terms of sales, knocking out over 1,000,000 sales in it’s first month alone. So what gives? How is it that even bringing this game, or it’s two direct sequels, up online can lead to the kind of flame wars that still have the national guard at the ready? Is Final Fantasy XIII really that bad? 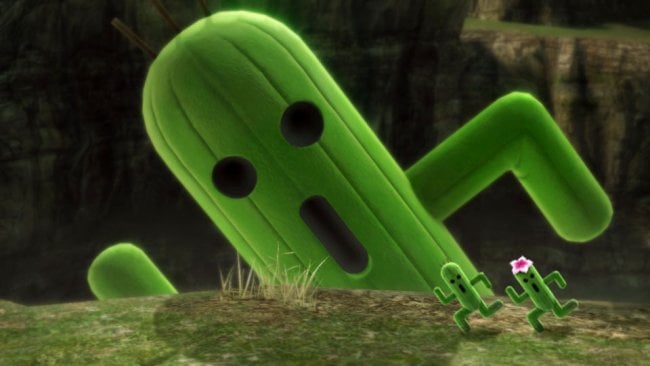 Your face when you find out that the Metacritic rating for one of the most hated games of all time sits at a steady 82.

Well, the answer is: yes and no. If you’re asking if the game is ultimately a disappointment and a bit of a black eye for the series in general, than the answer is absolutely yes. However, if we’re talking in the annals of all time worst games, a conversation that Final Fantasy XIII often finds itself in the general neighborhood of, than the answer is a definitive no.

No one is going to argue, even for a moment, that Final Fantasy XIII is devoid of problems. The exploration-based gameplay of the previous dozen games in the series was nixed almost completely from the final product in favor of what amounts to basically a series of corridors, painstakingly painted to look like parts of a living breathing world. Though the game did open up about 25-30 hours into the adventure, it was too little too late for most gamers, and the majority couldn’t even be bothered to explore at all once the opportunity finally arrived.

Now Final Fantasy XIII does have a few other problems here and there, probably the most egregious of which is the over-stuffed, near nonsensical storyline. Make no mistake, this game throws around made up words like l’cie and fal’cie like they’re going out of style, and Heavensward help you if you can’t remember the difference between the two. Still, from a principle standpoint, it’s the lack of exploration and world-building that most fans take issue with. 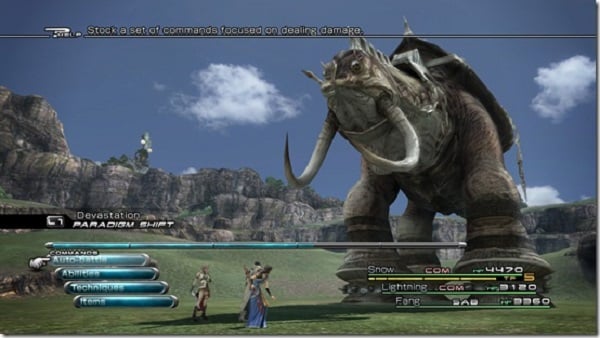 And they’re not wrong. Taking out one of the most essential elements of the game in favor of a more modern Call of Duty type of experience was certainly the wrong move. Imagine for a moment the latest The Legend of Zelda or Metroid title stripped of its ability to investigate your surroundings or just run around the map seeing what the game will let you get away with. It would be a mess, emptied out completely of one of the prime components that made it enjoyable in the first place.  That’s where this recurring anger for Final Fantasy XIII comes from.

Still, there are a few things to like about it, even with the benefit of hindsight. First off, the aforementioned battle system really is a tactical marvel. Few longstanding fans will recall ever being killed in random battles in previous games, and when it did happen on occasion it would generally be from some cheap enemy like a Malboro spamming your party with Bad Breath. In FFXIII, on the other hand, you could find yourself getting killed with incredible regularity any time you became complacent with the battle system. Neglect the tide of battle for even thirty seconds, and you could find your party irrevocably damaged in the mean time. And, as anyone who had the gall to go after a Shaolong Gui could no doubt tell you, things could go to hell a whole lot quicker than that.

Something else that makes FFXIII unique and worthwhile is the integration of some of the series more outlandish elements into the central storyline and presentation. The summons in particular took a very central role in the story here, and even appear in a number of cutscenes. In the past when characters were suddenly faced with an army, we were supposed to forget that they had a legion of giant monsters at their disposal, but not so here. Summons are regularly used to combat large groups of armed troops or solve other problems that would require a more redundant solution in older titles. 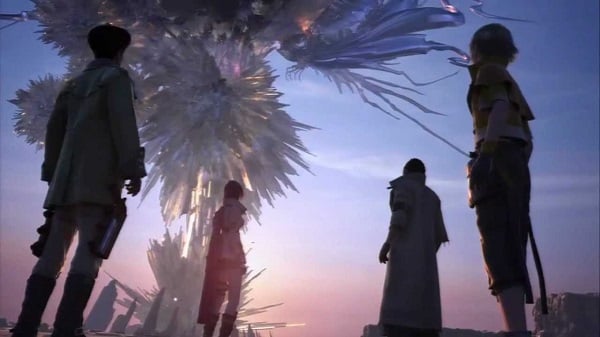 And you thought you’d be happy when it was over?

Finally, it’s worth noting that this game quietly snuck in one of the very first non-traditional love stories in mainstream gaming. Remarkably, many people didn’t even pick up on it, but the partnership of Vanille and Fang was a very early depiction of a lovingly devoted same-sex relationship, and one that paid off in dividends during the tear-inducing finale, thanks in no small part to Leona Lewis’ sorrowful lament of a lost love, “My Hands”. Notice the way the camera zooms in on Vanille and Fang’s clasped hands before credits? If you find the monitor suddenly getting blurry, look for the nearest box of Kleenex, or the nearest tub of Ben & Jerry’s as you like.

All of which is to say, that just over six years later, FFXIII isn’t near so bad as a lot of folks would have you believe. It’s divisive place in the series isn’t going to change any time soon, nor should it, but a game as vastly ridiculed and lambasted as Final Fantasy XIII deserves to be remembered for more than what it did wrong, and hopefully, after a bit more time has passed, it will be.