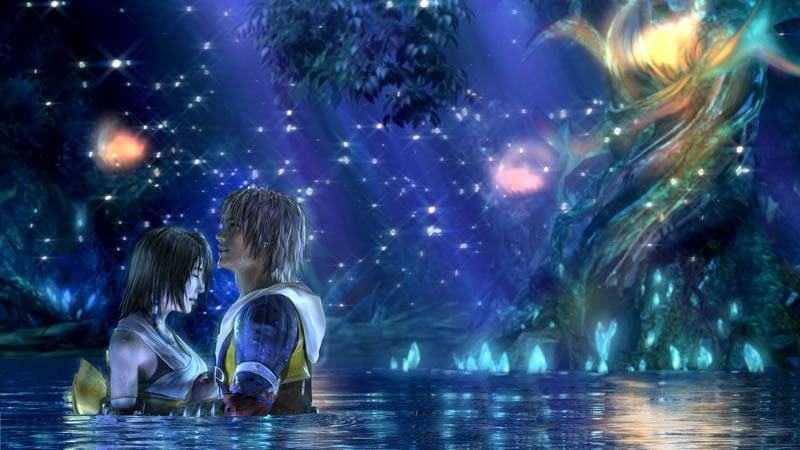 Some games are difficult. Others boost your self-confidence, through victorious battles and epic narrative progress, only to then nonchalantly inform you, forty hours in, that you’re actually a horrible player, a complete failure, and that you’ve bungled everything up.

Players start out in cosmopolitan, skyscraping Zanarkand. They control Tidus, a blond surfer-dude type who’s known for his mastery of blitzball, a bizarre mix of soccer, handball, and the underwater gymnastics of the creature from the Black Lagoon. On the night of a big tournament, a mysterious tidal wave wipes out the metropolis, marshaled by the unholy bulk of Sin, a humongous monster that’s like a whale bloated by a gigantic tumor.

Next thing he knows, Tidus wakes up in Spira, a land of tropical beaches, snowed-in mountaintops, and barren wastelands scorched by lightning. Desperate to get back home – or turn back time, or return to his dimension, or stop dreaming, or revert whatever process removed him from Zanarkand and deposited him in Spira and its uncanny Zanarkand Ruins – Tidus tags along with Yuna, a summoner on a pilgrimage to defeat Sin, and her merry band of guardians and hangers-on and even a cousin, among them Auron, Wakka, Lulu, Rikku, and Kimahri. 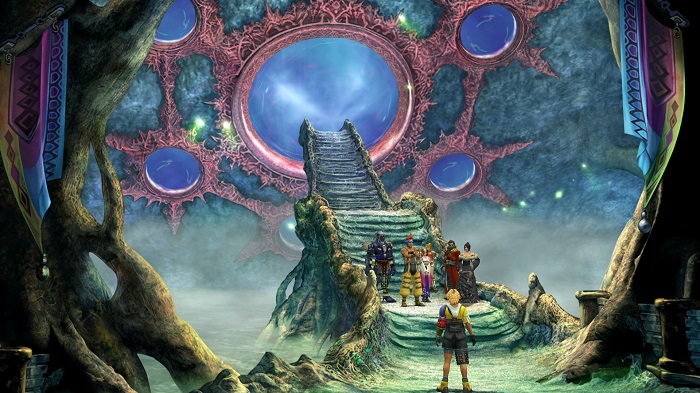 As in many other role-playing games, players engage in battles with fiends and, slowly but surely, improve their characters’ stats and abilities. But Final Fantasy X has a twist. Or, more precisely, it has a network of twists called the Sphere Grid, a board with dozens upon dozens of nodes and intersecting paths, which closely resembles a subway map. Characters start out in one spot and, with the necessary amount of experience points, eventually make their way anywhere else. So, for instance, if this were the London Underground, Tidus or Auron or Lulu could begin their journey in Queensway and, after a few combinations, get off at Seven Sisters or Epping or Cockfosters. Players choose the itinerary and this itinerary determines what kind of character’s left at the end.

Which is fun and liberating, unless you have no idea what you’re doing – which this writer, at the age of 14, did not.

That said, even stumbling in the dark of video game ignorance, players can still manage to wing it – for a while. The battle system is complex, but generous. Each turn lasts as long as the player wants. No “active time battle” nonsense, as in previous Final Fantasies. There’s even a helpful box showing which contestants will soon be up. Neophytes can take their time, plan, consider, and reconsider. And so, with luck and some acquired know-how, they might even reach the decisive battle with summoner-turned-bad Yunalesca, right before the plot reaches its home stretch. 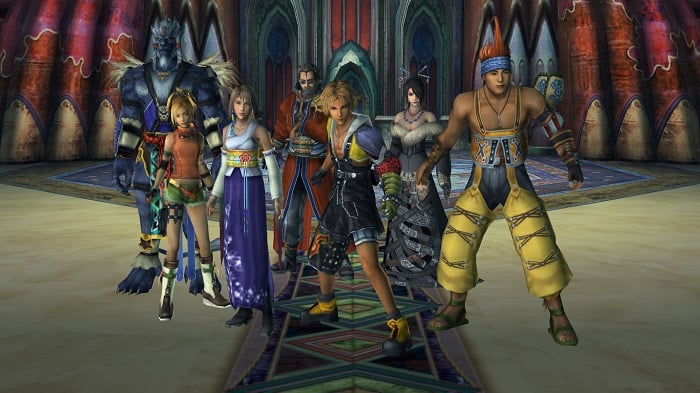 And then, yes, then they’ll stumble into a roadblock. Because Yunalesca has about seventy different forms and they’re all awful. And then these players will call a friend over, someone well-versed in the genre. And this friend will look at their party and deliver a brutal diagnosis: “Dear God, what have you done to Kimahri?”

What, indeed. This writer’s Kimahri was useless. Designed as a burly blue humanoid lion, he should have been a hardened warrior. Except he couldn’t land a spear attack or hurt anyone when he did. He also possessed disparate magical powers, for healing or dark spells, all equally undeveloped and, at that stage in the quest, impotent. Rikku fared no better. She wasn’t even good at stealing things, which is the entire point of her character. She, too, had disparate magical powers she couldn’t even begin to use. Wakka was an acceptable long-ranger, Lulu was a powerful sorceress, Auron was godly, Tidus was a second-rate Auron, and Yuna, well, Yuna was having second thoughts about her role as a healer-summoner and was beginning to ape Lulu.

An unbalanced party with serious weaknesses. Final Fantasy X allows players to build such a thing – and then suffer the consequences when the chocobos come home to roost and Yunalesca pummels them for the eightieth time.

In most video games, players can assume that, after forty hours, they’ve learned the ropes. But in Final Fantasy X, thanks to the Sphere Grid and unexpected difficulty spikes, that is when they might have to rethink everything and go back to the drawing board. That is when they might have to suffer through hours of further grinding to remedy wrong paths taken and worse decisions made. Or, even worse, no paths and no decisions but rather forty hours of circumambulatory meandering, up and down and across the Sphere Grid, ending up with a fighting magician with long-range dreams stolen from a low-level fiend.

Such freedom to mess up is frustrating and glorious. So many modern video games shy away from annoyance, in part because gamers are now pickier and have more to choose from. There are currently hundreds of games on many platforms. Deep backlogs, remastered editions, and budget-priced novelties. Thousands of titles easily acquired in successive sales on digital marketplaces that celebrate, as in a pagan nerd ritual, the to-froing of the seasons. So, in order to avoid the specter of irritated consumers, nearly all modern games, especially multimillion-dollar franchise behemoths, add maps for orientation, arrows for guidance, and conversation logs for recollection; they promise smooth learning curves and clever visual signposts; they include developer commentaries about how ingenious those signposts are; and they’re polished via beta testing and early access feedback. What is gained in user-friendliness, though, is lost in danger and adventure. 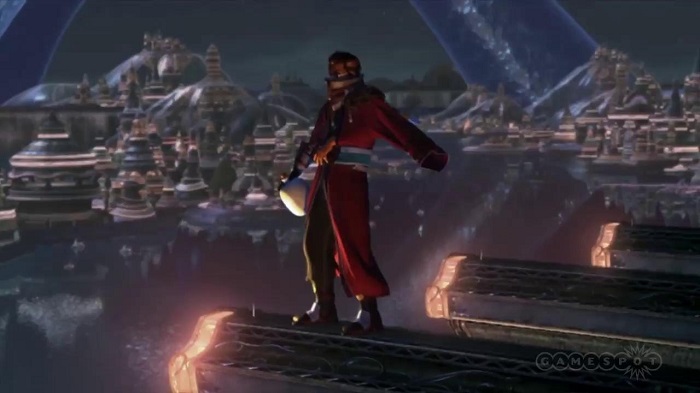 Now, Final Fantasy X is no exemplar of old-fashioned difficulty. It doesn’t force players to draw their own maps, take their own notes, or perform feats of rote memorization. There are no nonsensical puzzles involving, say, rubber duckies and subway stations. No time-consuming chores and arcane logic. On the contrary: it’s excruciatingly linear, a series of straight paths that prevent anyone from ever getting lost, connecting cities and towns that presumably sprawl but are quickly covered on foot. Gone is the world map from previous Final Fantasies. This time, progression is more like Half-Life, one corridor at a time. Also, there are few side-quests – unless you’re a big fan of blitzball, which this writer enjoyed as much as fighting Yunalesca with an undernourished Kimahri.

But it packs some elements of hazardous obscurity and weirdness. One is the Sphere Grid. Another is the deluge of items and weapons scattered in completely random locations, like piles of rubble and bushes by the side of the road, with often zero narrative justification, which makes exploration, or what passes for it, a monotonous and quietly hilarious pixel hunt. And yet another is the Omega Ruins, an optional dungeon that can only be discovered, accidentally, by haphazardly trying out coordinates on the airship map. It hosts some of the most exciting and challenging enemies in the game, but most players will likely never find it without reading about it online. This area is so absorbing, that it’s entirely possible to spend hours upon hours in its winding halls, transforming Kimahri into someone worth fighting with, Rikku into a top-rate thief and promising healer, and Auron into, well, someone even more godly than he already was, so that when the party finally meets Sin, the affair’s wholly anticlimactic.

This capacity to ruin the game experience – first by mismanaging your characters and then by overlevelling their skills – is what makes Final Fantasy X special. That is, its openness to failure and its way of teaching novices to never let their guard down and believe themselves veterans, because there’s always another fork in the road – or in the Sphere Grid.