Klei Entertainment released its immensely popular survival game Don’t Starve for the PC back in 2013. It came to consoles shortly thereafter, and players began requesting a multiplayer component almost immediately, leading Klei to begin working on Don’t Starve Together, a standalone multiplayer expansion to the game which they would eventually release via Steam Early Access in December of 2014. The wait is finally over after this long gestation period, and what we’re left with is a robust, feature-rich version of the game, one that lets players team up with their friends to survive the horrors of Klei’s whimsical wildernesses. It’s also, fictionally speaking, technically a sequel.

Survival games continue to do very well for themselves, and despite their (over?)abundance, Don’t Starve Together still manages to stand out thanks not only to its unique look, but also its gameplay. Procedurally generated worlds are filled with plants, minerals, and creatures of all kinds, and players are set loose to explore and survive as best they’re able by scavenging for food, crafting tools, and fending off aggression. Given the game’s more fantastical take on things, magic and steampunk-style tech make for a more colorful and interesting array of options. In fact, the extent of these options at any given time can be huge, to the point of potentially overwhelming newcomers; but as players try and fail to avoid death by violence, the elements, and of course starvation, they’ll learn lessons that allow them to survive longer in the future. Veterans will have far less difficulty in general, but learning to coordinate with cooperative teammates (or deal with aggressive players on PvP servers) presents its own challenges. 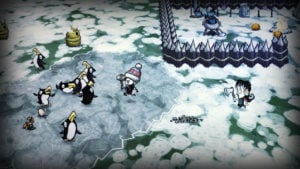 Together’s multiplayer offering is delivered with gusto, but doesn’t strive to otherwise reinvent the wheel. It features content from the standard game in addition to the Reign of Giants expansion, and while Klei has not yet announced official plans to bring over content from Shipwrecked, they do seem to be thinking about it (in addition to a PlayStation 4 version). Yet despite much of the content being familiar, the multiplayer framework totally changes the feel of the game. Instead of a tense, lonely experience that requires constant vigilance and frequently ends in failure, you get a tense social experience that requires slightly less vigilance and still frequently ends in failure, albeit more customizable flavors of it.

Up to 6 players—potentially more if you’re using customized dedicated server tools—can join together in 3 different game modes that throw their own twist on the classic formula. In Survival, each player starts at a central location and gets one life, turning into a ghost when they die, and resurrection is possible through the efforts of their companions. In Wildnerness mode, on the other hand, every player’s entrance into the world is at a random location, and their lives are one-shot affairs. Upon death, players are booted back to the character select screen, their maps are wiped, and they get thrown back into the world without any frame of reference, requiring them to survive on their own until they can reunite with their friends. Finally, Endless mode has a central starting point from which dead players can resurrect over and over again without losing their map, but it comes at the cost of reduced maximum health upon each return. These all work fairly well, but will still be hard on a group of players who don’t know how to reliably resurrect one another or counteract the health reduction in Endless mode. Two players can happily play together, though the things get more fun the more people you add, and the best experience predictably comes from playing with a group of close friends rather than hopping on random servers, especially when making heavy use of voice chat (which is recommended). 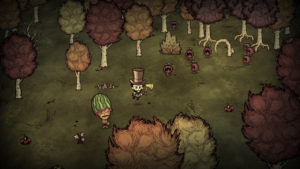 Though these different multiplayer options are all inherently less restrictive than the permadeath nature of the original game, the experience is no less challenging. Don’t Starve was a difficult game at its default settings, and Together maintains the same steep learning curve. Players can stack the deck in their favor through a familiar host of server options, and servers are moddable as well, but not knowing how to put out a wildfire or avoid freezing to death are things only experience (and possibly a lot of wiki-reading) will teach.

Together also retains the fantastic, quirky visuals of its forbear. A mix of Edward Gorey with a touch of Tim Burton, the game has a truly distinctive look that does a lot to keep it unique despite a crowded market of competitors. The look meshes perfectly with the game’s themes, which read like lighthearted excerpts of Poe and Lovecraft, providing one of the more unique environments you’re likely to come across. The various playable characters (11 in all) add to this as well, with wonderfully expressive designs complimenting distinctive personalities and unique gameplay twists. Music remains something of an afterthought, with great moments that never quite feel as though they’re used to their full potential, but this is at best a minor complaint. 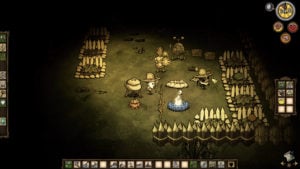 If you care more about playing with your friends than experiencing the original game’s adventure mode or the content from Shipwrecked, there’s no reason to hesitate in picking up Don’t Starve Together. Playing alone is also entirely possible here, with extra ways to circumvent death, so even if it doesn’t manage to be the definitive edition of the game, its versatility, abundance of content, and breadth of options make it an extremely attractive one.