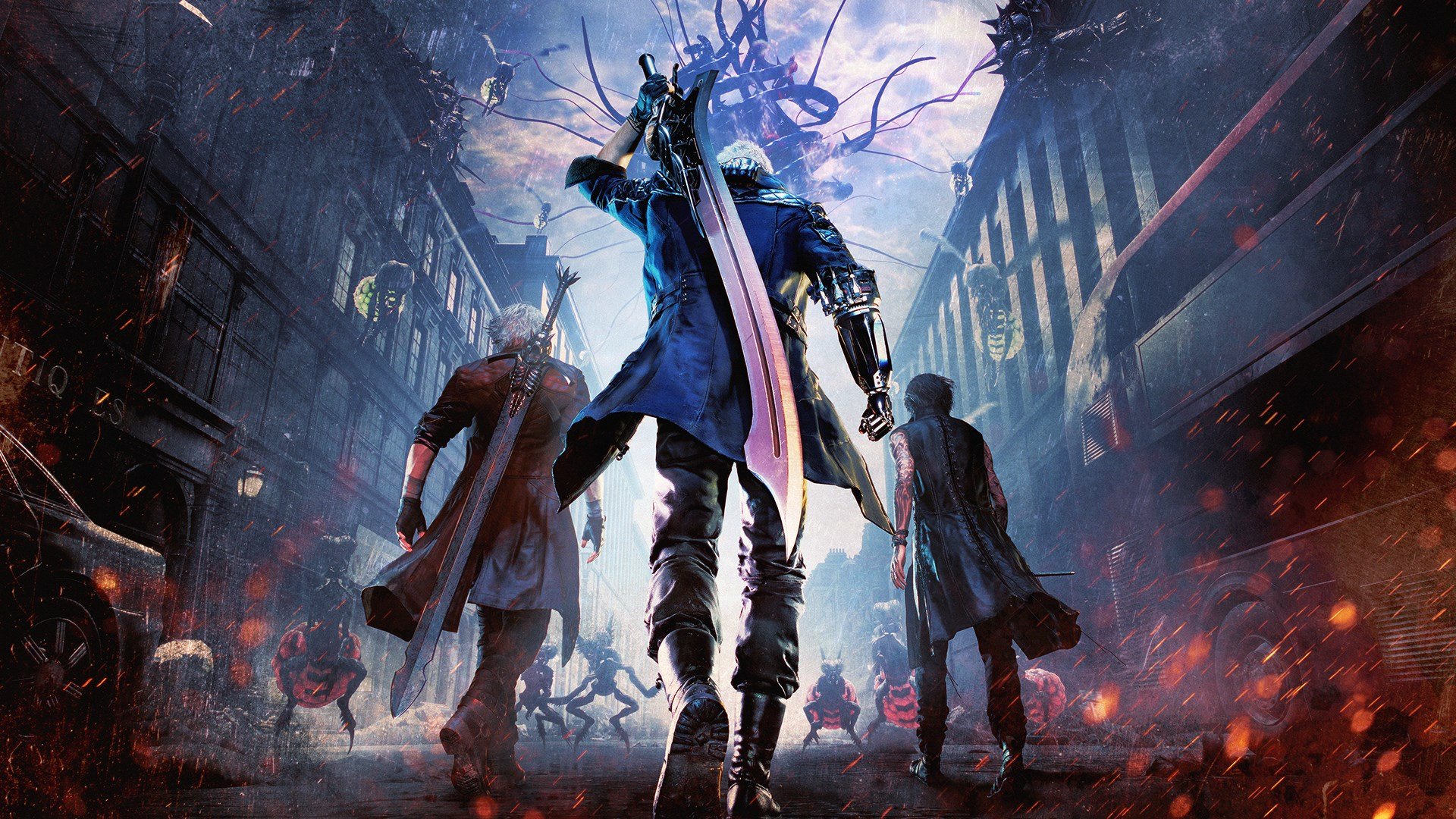 The Devil May Cry franchise has always had a bit of an issue with filler. Although the first and third titles managed to balance their non-action gameplay fairly well in regards to pacing, Devil May Cry 4— along with the reboot— placed too much emphasis on “variety.” In the context of Devil May Cry, variety within gameplay tends to amount to light exploration, platforming, or some form of puzzle-solving. On a conceptual level, it does make sense to vary gameplay as much as possible. After all, too much of one mechanic can lead to a game coming off derivative. At the same time, straying from core mechanics too often can give an impression of insecurity, that the development team— and thereby the game— lacks the confidence to embrace itself in earnest.

Although the notion that DMC 1 and 3 are insecure of themselves might come off as laughable to fans of the genre and series alike, it is worth noting that there is some truth to said sentiment in regards to the rest of the pre-5 franchise. While the original Devil May Cry managed to pace itself rather well thanks to its arcade-like nature, several missions made use of gimmicks that strayed greatly from the core mechanics with the Ghost Ship being the most notorious outlier.

Devil May Cry 2 might as well be the definition of filler. In a desperate attempt to make itself appear “bigger and better” than its predecessor, DMC2 places an incredible amount of emphasis on space. As a result, missions– which were once carefully built around specific set-pieces that had as little negative space as possible– not taking place on large fields with poor enemy placement. Making matters all the worse, the sequel leans in far too much into the puzzle solving elements, leaving the combat painfully under-cooked.

Even Devil May Cry 3, which is often considered not only the greatest game in the franchise but in its genre, is victim to filler. Granted, it’s on a much smaller scale and the general design of the whole game is incredibly tight, but this only makes the filler-esque moments stand out all the worse. There’s nary a good reason why Dante should have to endure a boss rush that’s tied to a puzzle right before the game’s finale. Earlier missions, as well, play up the exploratory elements of the first game a bit too much seemingly to simply prove that DMC3 is the “true” successor to series’ origin point.

While Devil May Cry 4 more or less acts as a natural extension of DMC3 gameplay-wise, it fumbles spectacularly when it comes to level design. Just about every single mission features a stage-defining gimmick that tanks potential replayability to an extreme. This is to say nothing of the fact that Dante’s third of the game might as involves him not only backtracking through Nero’s stages but fighting Nero’s bosses, giving the impression that DMC4’s back-half is little more than literal filler to pad out the game. Going into the reboot, DmC: Devil May Cry, Ninja Theory simply pushed the fourth game’s insistence on non-action elements, shining a spotlight on platforming and pure exploration.

All this is not to say that Devil May Cry as a franchise is lesser than perceived because it often uses filler as a crutch. Far from it– Devil May Cry 1 and 3 remain two of the greatest action games ever made. Rather, it’s to shine a light on just how surprising Devil May Cry 5’s total lack of filler is. While only time will tell where DMC5’s legacy will fall exactly in regards to the first and third game, it’s quite clear from a pure design perspective that the franchise’s fifth mainline entry understands exactly where the series’ fat was and why it needed trimming. It’s one thing to omit filler entirely; it’s another to comprehend why said filler should be omitted.

In many respects, Devil May Cry 5 was more or less Capcom’s chance to prove that the franchise could once again reach the same highs as DMC3. In following both Devil May Cry 4 and DmC, the series’ fifth entry needed to be more than a return to form, although a simple return to form likely would have sufficed considering the series’ fairly rocky road-map from the first game to the fifth. More importantly, Capcom saw an opportunity not to reinvent the Devil May Cry brand, but to refine it.

Devil May Cry, at its best, has always understood the need to look back on itself in order to move forward. This is best evidenced by how Devil May Cry 3 directly lifted several of the second game’s elements in order to bolster its own foundation. Although DMC5 does this as well, it more interestingly does so from a level design perspective, something the series had always been fairly complacent with. If anything, the longer the franchise went on, the more the games seemingly saw fit to include non-action elements to near extreme measures.

Devil May Cry 4 is an excellent game on a purely mechanical level, but it suffers immensely thanks to its abundance of filler. While there are very legitimate reasons behind the backtracking in the campaign’s second half, this doesn’t change the fact that it’s all mainly filler. Well dressed filler, but filler nonetheless. DmC: Devil May Cry which, admittedly, has the benefit of being a finished game over DMC4, puts too much stock in its non-action elements making for playthroughs that often go by far too slow for their own good. What makes the filler damning isn’t so much their presence, but the nature of the franchise. Devil May Cry is a series built on replayability.

Were it not for Bloody Palace, it would be legitimately tiring returning to Devil May Cry 4 with the same fervor some fans return to DMC3 with. Even the first game understood that its foundation was one built on replayability. By the time players would reach Dante Must Die, the puzzles and exploration would no longer be a problem because they would, logically, already understand the solutions. With Devil May Cry 4, however, and by extension DmC: Devil May Cry, this same workaround simply doesn’t work due to the fact that puzzles, platforming, and exploration are just too time-consuming for their own good. The more time a player spends away from the core gameplay, the less the core gameplay gets a chance to leave as much an impact.

Which is ultimately what Devil May Cry 5 excels at over the rest of the series. From the start of the prologue to the very end of mission 20, there is not a single moment that stands out as explicit filler. Though platforming sections still have their place, particularly when playing as Nero, they neither outstay their welcome or ever take away from the core combat. In previous games, platforming sections would genuinely be their own sections. As per the rules of basic level design, they would connect to other areas, but not without taking their own chunk of time. Now, they’re quick, easy to maneuver, and most importantly, optional more often than not.

This philosophy towards filler is put on full display in mission 15, Nero’s last stage before the final boss. A level with multiple branching paths, players can either opt to take on an obstacle course of sorts that features its own rewards, (such as a Gold Orb, Blue Orb, and Trophy,) or simply take on a gauntlet of enemies. In a previous entry, Nero would likely have been forced to endure the obstacle course spliced in with the enemies, but Devil May Cry 5 cleverly, and correctly, chooses to make any perceived filler optional.

Which in itself is something very much worth taking note of. Content that would be seen as filler when mandatory becomes far more appealing when made optional. Aside from a few bonuses, there’s genuinely no harm in avoiding Nero’s obstacle course. If anything, the fact it can be avoided makes the prospect of clearing it all more appealing. Its optional nature also means Capcom can up the difficulty of the course without cannibalizing the mission’s pacing. The closest the series had ever come to this philosophy before was with Devil May Cry 3’s 18th mission where Dante could earn a Blue Orb shard by clearing the boss rush in its entirety. DMC5 sees that approach and takes it to its natural next step.

It isn’t as if this approach makes missions shorter, either. In previous games, removing the filler would trim levels quite a bit, but Devil May Cry 5 simply uses more action scenarios. Where a platforming challenge or puzzle would once rear its ugly end, more enemies take their place. Mission 16 with Dante essentially plays out like one gauntlet after the next with only some light platforming to serve as a pace breaker. Even then, pulling off some of the trickier platforming sections will net the player with bonuses along with extra fights.

Of course, removing the filler doesn’t suddenly make Devil May Cry 5 the Alpha and the Omega of the hack ‘n’ slash genre. Filler or not, DMC5 struggles with its own difficulty balancing on Dante Must Die and never quite manages to find the right pacing when it comes to playing as Nero, V, or Dante (although the emphasis on Dante in the back half is absolutely the right call from a design perspective.) Ultimately, though, those problems aren’t all that major of problems. If anything, they’re far lesser than Devil May Cry 4’s second half; DmC: Devil May Cry’s insistence on dedicated platforming sections; and Devil May Cry 2’s everything.

By simply keeping the focus on the combat, Devil May Cry 5 is perhaps the easiest game to replay in the series. Not because it’s easier than previous entries (a topic for another day,) but because players are never subjected to content they clearly aren’t playing Devil May Cry for. When it comes down to it, no one plays DMC for the platforming or puzzle sections; at least not solely for them. The core appeal has always been the action; the combat; the spectacle of it all. Not every mission in DMC5 is a hit, but the majority are, more so than any other game in the series save for the third. That in itself is a testament to how tightly designed Devil May Cry 5 is. Devil May Cry 5 is not the reinvention of the wheel, but it’s more than just a return to form: it’s a refinement.