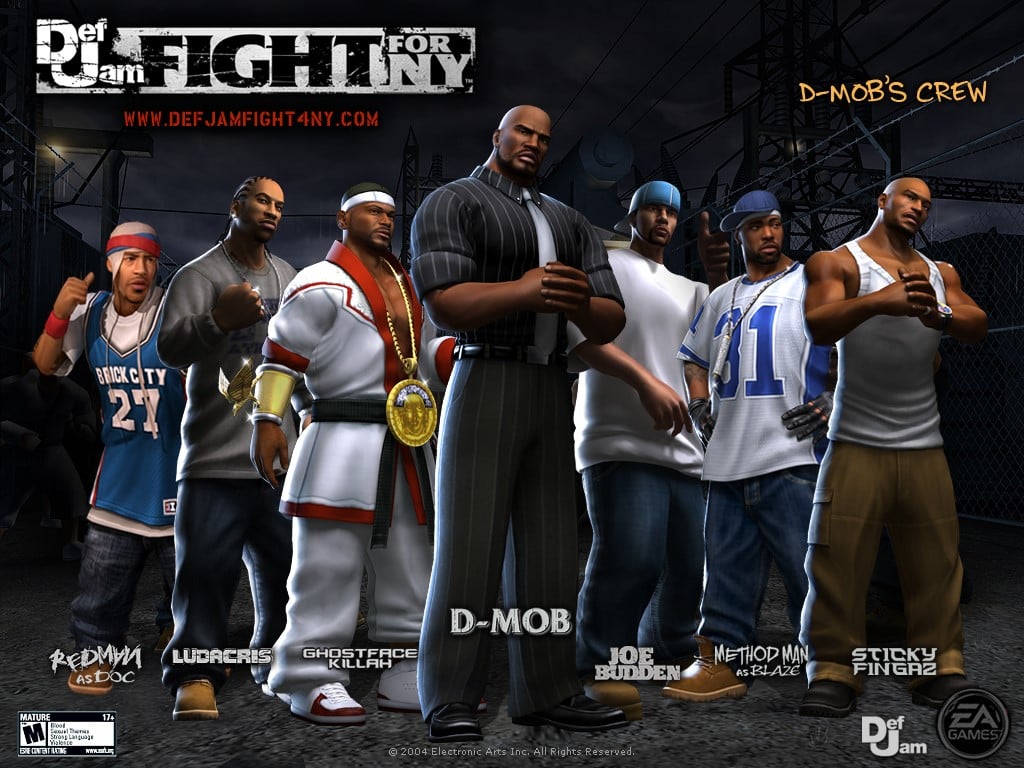 Video games are weird, and none come any weirder than the hip-hop-influenced fighter, Def Jam: Fight for NY.  The background of this often forgotten gem stems from its predecessor, Vendetta, a game that, for all intents and purposes, shouldn’t have happened. Publisher, Electronic Arts, initially meant for the Def Jam: Vendetta to be a follow-up to its last 2 wrestling projects, WCW: Mayhem and Backstage Assault.  The project seemed promising enough, with Japanese developer, AKI, manning the construction of the game’s mechanics. AKI was responsible for the two WCW licensed games for the Nintendo 64, WCW/nWo World Tour and the critically acclaimed WCW/nWo Revenge, as well as the acclaimed WWF Wrestlemania 2000 and No Mercy. The deal fell apart, due to Vince McMahon’s purchase of WCW in March of 2001, and a faiedl attempt to revive the brand later in the year, causing the project to be nearly scrapped entirely. The assets of the canceled WCW game were transferred over to what would be known as Def Jam: Vendetta, which was successful enough to warrant a sequel. But instead of resting on their laurels, EA and AKI would use the wrestling template to create one of the most appropriately urban and influentially hip-hop fighting games ever made.

While Def Jam: Fight for NY wasn’t the greatest fighter ever made, not even during the dry spell of fighters in the mid-2000s, it does arguably give the most respect to the art of hip-hop out of any game ever made. That sounds more loaded than anyone would actually realize because, on the surface, it looks like one of the worst examples of “rapper” tripe that was coming out pretty regularly during that time, with the profane dialogue, the excessive bling, a story with a script that plays out like gangster rap fan fiction, and an amount of product placement that would make a militantly conscious rapper lose his mind. But if the player digs a little deeper, the game, in and of itself, is a portrait of battle emceeing taken to a physical extreme, both figuratively and literally. But to understand the parallels, one has to understand the very roots of battle emceeing itself, which unfortunately means bringing up the one event in American history that everyone would like to forget… briefly, but still. 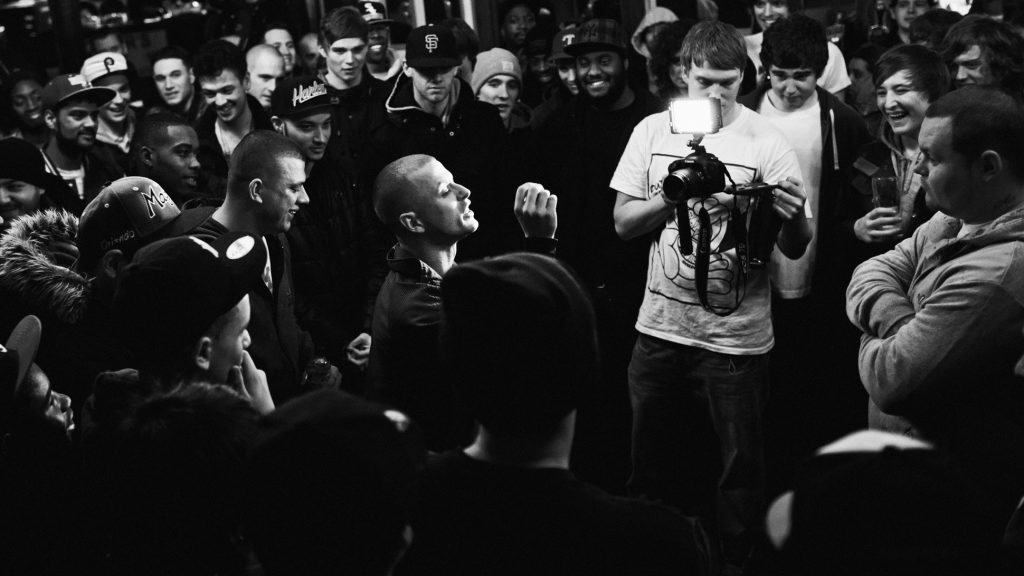 Battle emceeing is rooted in the “Yo Mama” back-and-forths, which were known in African-American communities as the Dirty Dozens, or just “the Dozens”. The Dozens was conceptualized from American Slavery, where slaves were sold one at a time unless they were suffering from some kind of ailment; illness, missing limbs, etc. Those “defected” slaves were sold by the dozens.  During down time, the dozens would crack jokes to one another, usually at each other’s emotional expense in an extreme sense.  This tradition of verbal combat would last for generations, with even a young Cassius Clay using the Dirty Dozen’s format to launch a barrage towards Sonny Liston in a famous interview, and it would become a perfect fit for hip-hop, especially when the shift of focus went from the DJ to the emcee. Conceived in the South Bronx, New York, hip-hop was used as an alternative from the omnipresent criminality of the street, with battle emceeing being used as an alternative from the use of guns, and even fists, to solve civil disputes. 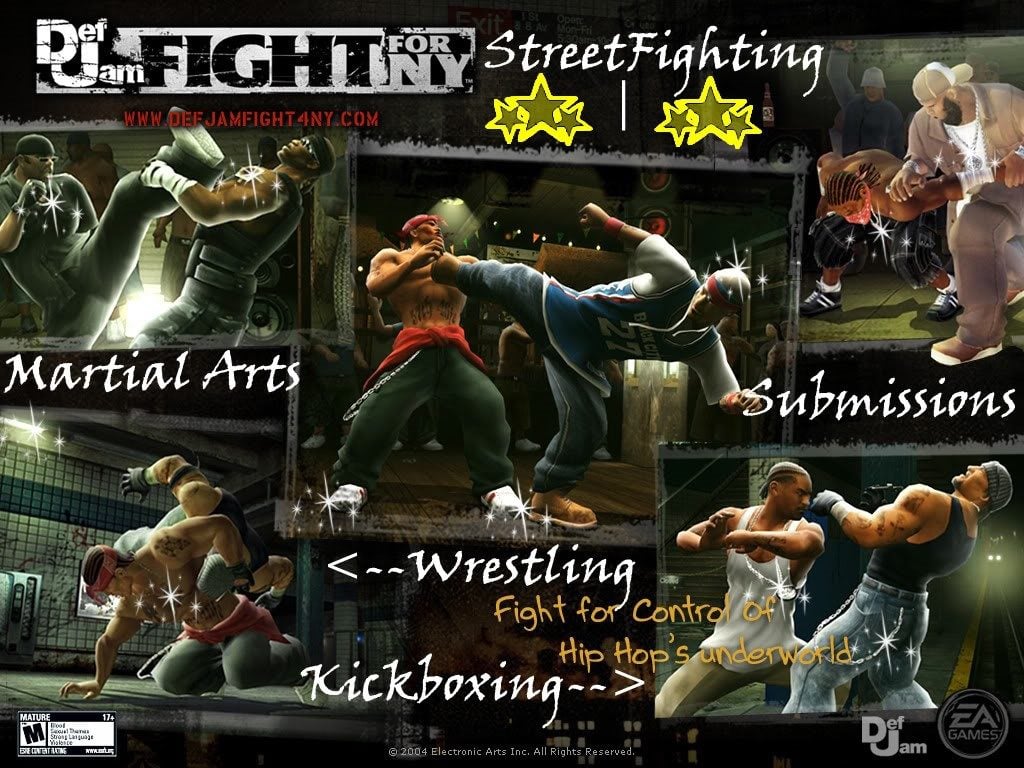 How does Fight for NY fit the paradigm of battle emceeing, when the point of the game is to beat each other into hamburger?  Well, within the extreme nature of the combat; the game plays more like an urbanized Enter the Dragon or Master of the Flying Guillotine blended with amateur mixed-martial arts. Many rappers, particularly the lyrically inclined, often liken their styles to martial arts anyway. Some say that’s how can tell a good rapper from a bad one; the ones who take the time and put forth the effort into what they say so that it becomes second nature, as opposed to the ones that sound jumbled and, well, stupid. The former would destroy the latter. The same principle applies to fighters too; remember that CM Punk/Mickey Gall fight? While it can be argued that Punk is a decent fighter in his own right (maybe), Gall’s been training in mixed-martial arts for his entire life, while Punk only utilized his Muay-Thai style for professional wrestling; not exactly the same thing. Regardless of intent, the similarities were there from the start, and the individual styles of each licensed fighter in the game reflect their styles as rappers, from Redman and Ludacris’ fast and in-your-face styles, to Ghostface Killah and Scarface’s hard-bodied power tactics.

There’s also a matter of the setup of all of the venues, particularly the ones that include crowd involvement. During what we now called freestyle battles, the point of the performance of each emcee is to win the accolades and affection of the audience. It’s usually done with well-placed punchlines and witty wordplay.  During a fight in Fight for NY, members of the audience only get involved if the fighter hits his opponent with a staggering haymaker and creative combos. There’s even a mode in the game where the fighter who the audience likes the most (dictated through an arbitrary high money count) wins the match, even if the winner gets knocked out. No, really!

Def Jam: Fight for NY was originally released for the Xbox, PS2, and Gamecube, and got a follow-up of its own. But with a shift in developers (from AKI to EA Chicago, which developed the Fight Night games) came a shift in the direction. While the physical manifestation of battle emceeing concept stayed intact, Def Jam Icon’s use of a “realistic” fighting system rather than the over-the-top, tactile, Ong-Bak-inspired action from AKI’s wrestling mechanics, caused the game to lose its soul in transition. The point of Def Jam: Fight for NY was to use those wrestling mechanics to create something entirely original, a point that EA Chicago apparently miss. It’s worth checking out, and will hopefully give a sliver of appreciation for hip-hop culture with this new perspective of the game… hopefully.