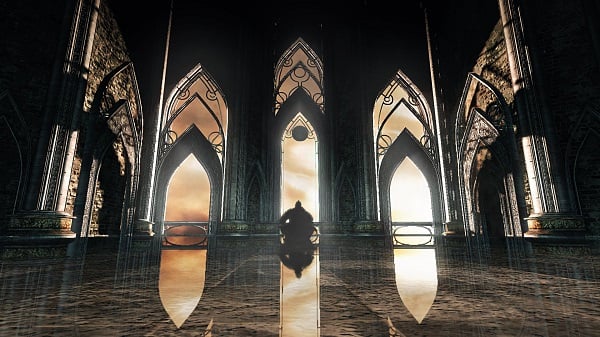 It’s pretty well known by now that the mantra of the Souls series is “Prepare to die.” Yet you may still find yourself continuously shocked at the near-trolling levels of effort that From Software puts into killing the player via tactics of shock, awe, and fear. It would seem that the most appropriate citation is that of the opening cutscene of Things Betwixt, where the three former Firekeepers just laugh at you before you even begin your journey…almost as if they know what kind of horrific traumas are to come.

And, of course, they do.

Carrying on the proud tradition set forth by it’s predecessors, Crown of the Old Iron King lulls the players into a false sense of security right from the start. After entering the new area, players are introduced to an ashen disasterpiece most closely akin to the imagined aftermath of Pompeii’s epic eruption, only transposed into a fantasy setting. Gigantic chains tie the mountainous areas together like geographical prisoners and glowing fires in the horizon tease of a warmth that will never touch upon your tired flesh.

Not quite as labyrinthine as Crown of the Sunken King, the new DLC is nonetheless most carefully associated with the maze-like caves of Stonefang Tunnel in Demon’s Souls. It is an area of endless fire-based enemies where stone chasms and rocky cliffs permeate dilapidated structures built by a long forgotten society. 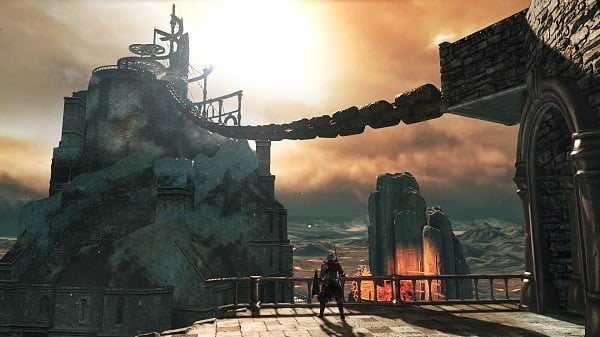 Along with the new area, and its subsequent enemies, Crown of the Old Iron King challenges its would-be conquerors with three new bosses, each of whom are terrifyingly difficult to topple. Even more than its predecessor, the new DLC seems intent on crushing the player’s hopes of success again and again. The savage difficulty makes the new area more punishing than even the most hardcore Souls fans might have imagined, but as usual, the rewards are only more satisfying when at last the area is completed.

With only one more expansion on the way, Dark Souls II is truly almost at an end, but if the conclusion to The Lost Crowns trilogy can trump its first two efforts, than fans of the series will happily go into the deep dark night one last time.
Share
Tweet
Reddit
Share
Email
Pin
More
Related Topics:Dark Souls IIDark Souls II: Crown of the Old Iron KingFrom SoftwareNamco Bandai