The Arcade Archives series has always seemed a bit strange when examined alongside the rest of the Switch’s eShop. Despite its presence on other consoles, it has often felt like an extensive workaround by developer Hamster to bypass Nintendo’s own reticence and market to Switch owners hungry for retro offerings, especially when one considers that Neo Geo ports of classic arcade games have a history of being available on Nintendo consoles in the past.

Naturally, back in September when Nintendo announced that seven of their arcade classics were coming to the Switch via the Arcade Archives, it seemed like an awkward fit. After all, wasn’t Nintendo’s long-rumored Switch Virtual Console system supposed to fulfill the same purpose? What was Nintendo doing by allowing a third party company to re-release their games for them when they’ve had a history of doing it themselves?

VS. Super Mario Bros. remains an excellent port and fun refresh of one of gaming’s greatest classics. Excellent emulation by Hamster ensures that the arcade classic is faithfully transferred from its arcade roots to the Switch. By swapping in a few levels from the insidiously difficult Super Mario Bros. The Lost Levels and making a number of smaller changes to level design, VS. Super Mario Bros. serves as a fun and engaging remix of a console classic, albeit not one for the Super Mario neophyte.

In addition to the main mode, two additional modes, Hi-Score Mode and Caravan Mode challenge the player to aim for a high score or earn as many points in five minutes as possible. Fun, engaging, but ultimately limited in their scope, these additional modes feel a bit out of place in a classic Super Mario Bros. title, clashing with the genre’s original design philosophy. They seem more at home in Hamster’s other Arcade Archives titles, such as ports of the Metal Slug series than in an action platformer. 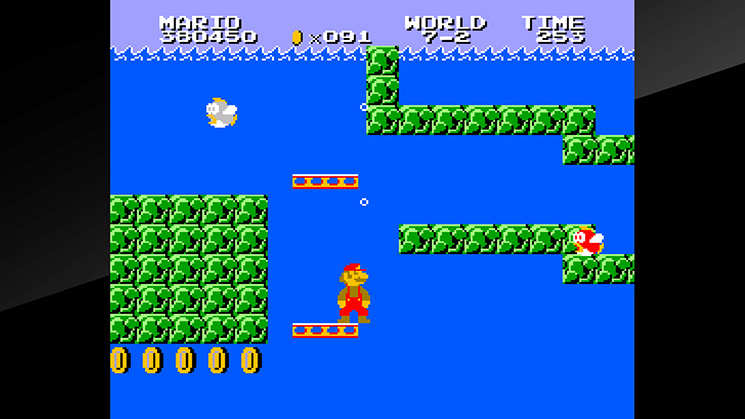 In addition, Hamster’s emulator, while technically fantastic, has a major issue: a crippling lack of save states. While a non-issue if one plays the game as it was originally intended (the emulator does include unlimited tokens, after all), the lack of save states can nonetheless make VS. Super Mario Bros. a very difficult to finish, especially in the later levels. While there is a workaround that utilizes the emulator’s “interrupt save data” feature, it is far from streamlined and difficult to repeatedly use, requiring that the player exit to the main menu every time they wish to reload.

Price is another problem with VS. Super Mario Bros. Despite launching at $7.99, the same price of SNES games on Wii and Wii U, VS. Super Mario Bros. has very little to offer for those not interested in the extra modes or the novelty of having a special version of an endearing classic. Given the age, difficulty, and brevity of VS. Super Mario Bros., there is no way it should have cost more than $4.99. While Nintendo may not be responsible for the game’s final price, it is a glaring issue nonetheless.

Ultimately, VS. Super Mario Bros. feels like an overpriced means for Nintendo to gauge interest in their upcoming Virtual Console on the Switch and a game that charges more for the novelty than for the actual experience. For those eager to vote with their wallets and encourage Nintendo to release more retro titles for the Switch, it’s worth the pickup and a good game to boot. However, for the average Switch owner, it’s far too short and too old for its large price tag as a remix of a classic game that has been ported countless times.