Crane games are a staple in Western culture. Every Target. Walmart, and most general goods stores will have at least one of these pesky machines near the entrance. Oftentimes, they’ll be lined with cheap plush toys from a popular movie or cartoon (or sometimes stock the store couldn’t sell). Japan has them too, but your prizes tend to be of a bit higher quality than what you’ll get shoving quarters into a machine by the checkout line. Every single game center you run into in Japan will probably have a floor dedicated to various prize games; hell, some places are ONLY prize games.

Now, let’s go over the types of machines you’re most likely to encounter in a Japanese game center. 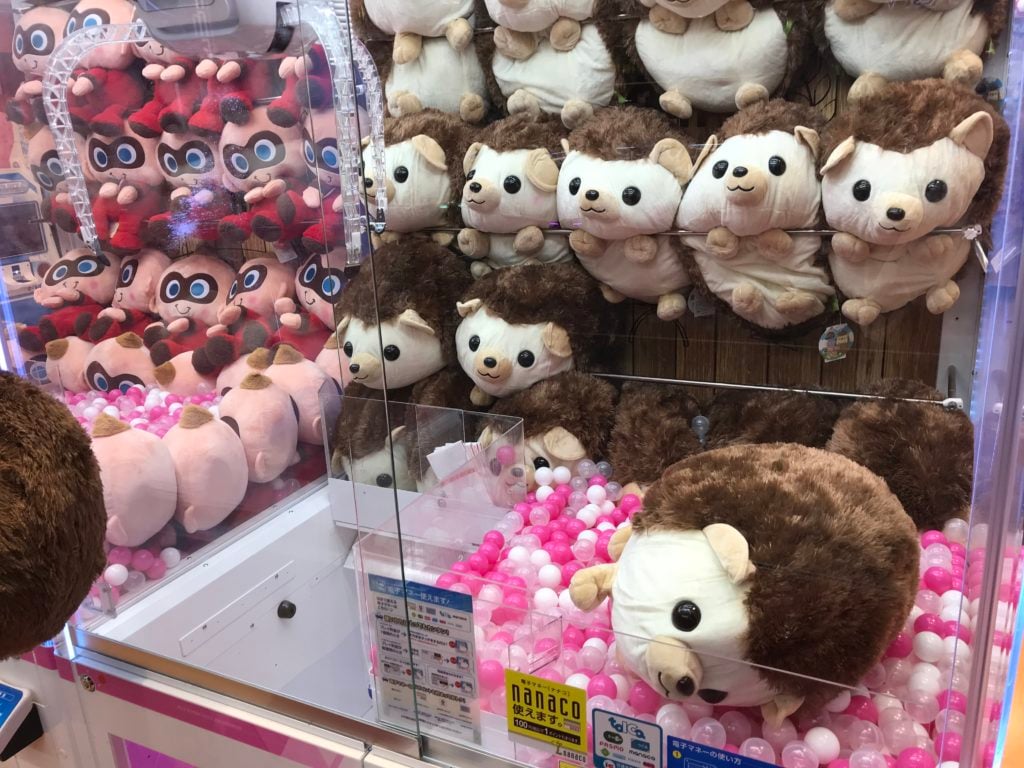 Let’s start this list of game center attractions off with something familiar: the skill crane. Skill cranes are the foundation on which most Japanese UFO catchers are built. Use a claw to grab a prize and pray to the god of your choice that whatever you pick up actually makes it over the small pit in the machine’s corner.

These machines are universally rigged, with the crane strength being rather abysmal until meeting a certain threshold of failures. You tend to find these machines only in extremes, either housing tiny knickknacks or jumbo-sized plush toys. 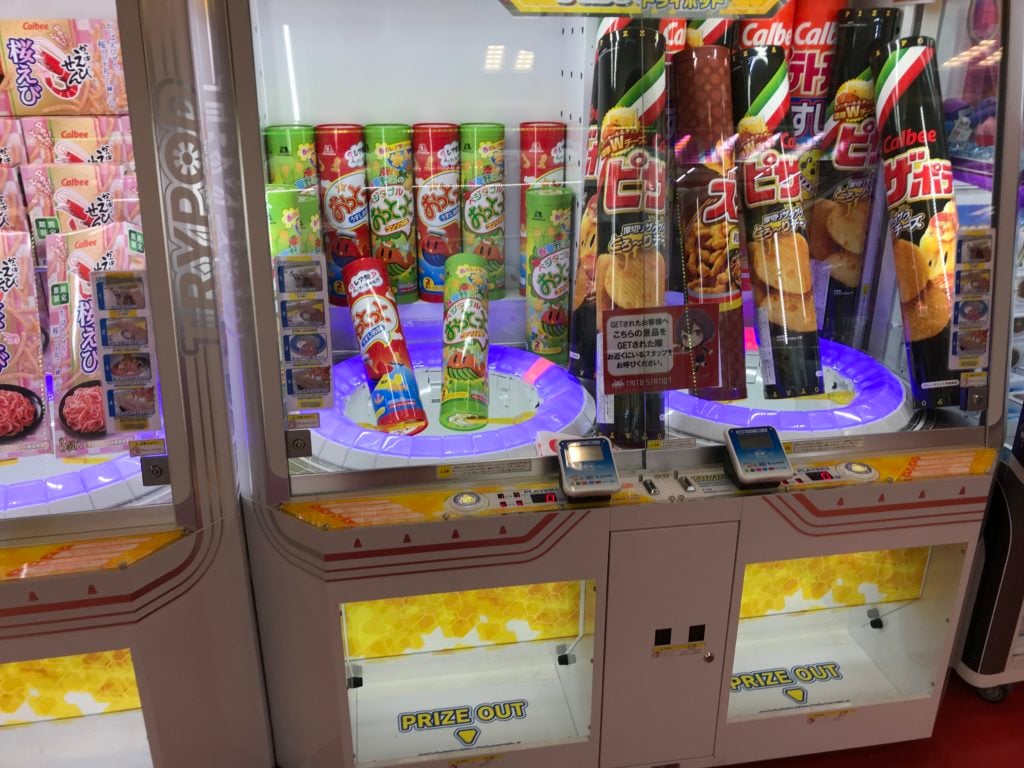 Cyclone machines are pretty popular in Japan as well. You have to stop a light running through a circuit of LED bulbs on just the right point to claim your prize. While these mostly give tickets at Dave & Buster’s, the Japanese variety can come with a variety prizes, but I most commonly see jumbo tubes of snack foods and candy placed in them. These are also just about as rigged as their Western counterparts, with the light being ever so slightly off from where you stop it at until a loss threshold is reached. 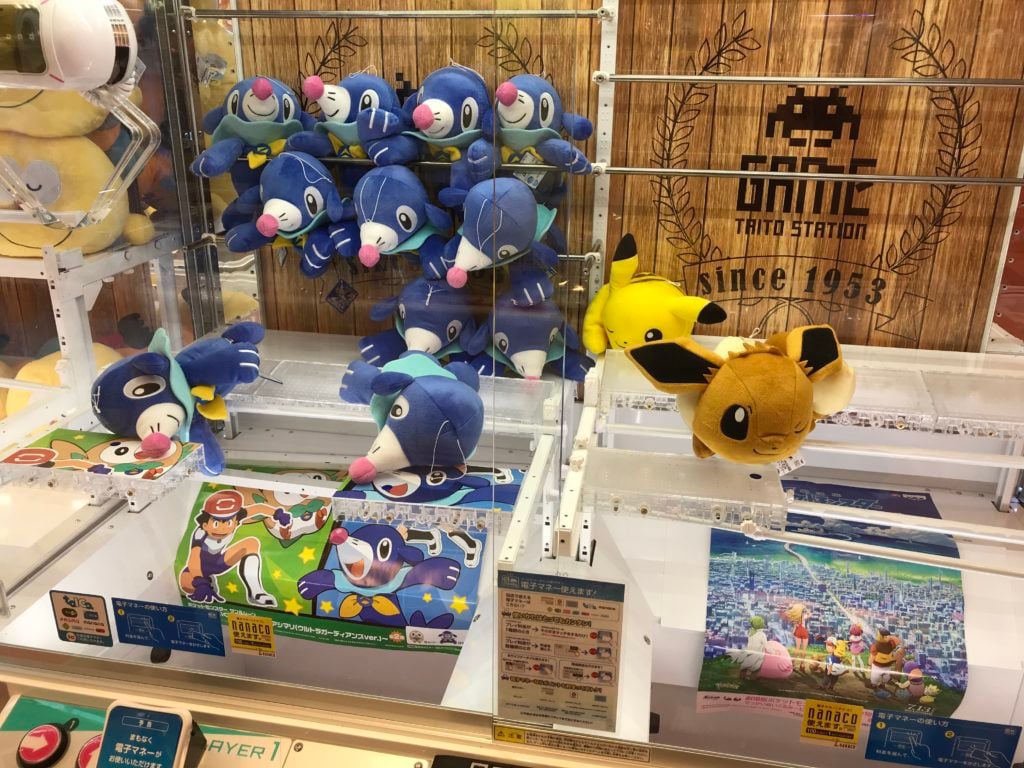 The push crane is one of the most common types of machine you’ll find in Japan. It’s an easy machine to recognize: Moderately sized toys or figures are balanced on top of a pair of metal or plastic beams. The beams come together at one end of the machine’s case, and gradually split away as they get closer to the other end.

The goal is to use a two-pronged claw to slowly push the object towards the opening in the bars where it can fall through. The claw doesn’t close all the way, so the best tactic to move your desired prize is by having the claw shove it when it goes in to close. If the hole is on the right, use the left prong, and if it’s on the left, use the right prong.

The claw isn’t strong enough to actually lift the toy. At best you’ll just get your prize to land in a position where you can simply push it downward instead of having to drag it all the way to one side instead. Even then, it’s still probably going to be better to just drag the toy along as was intended. 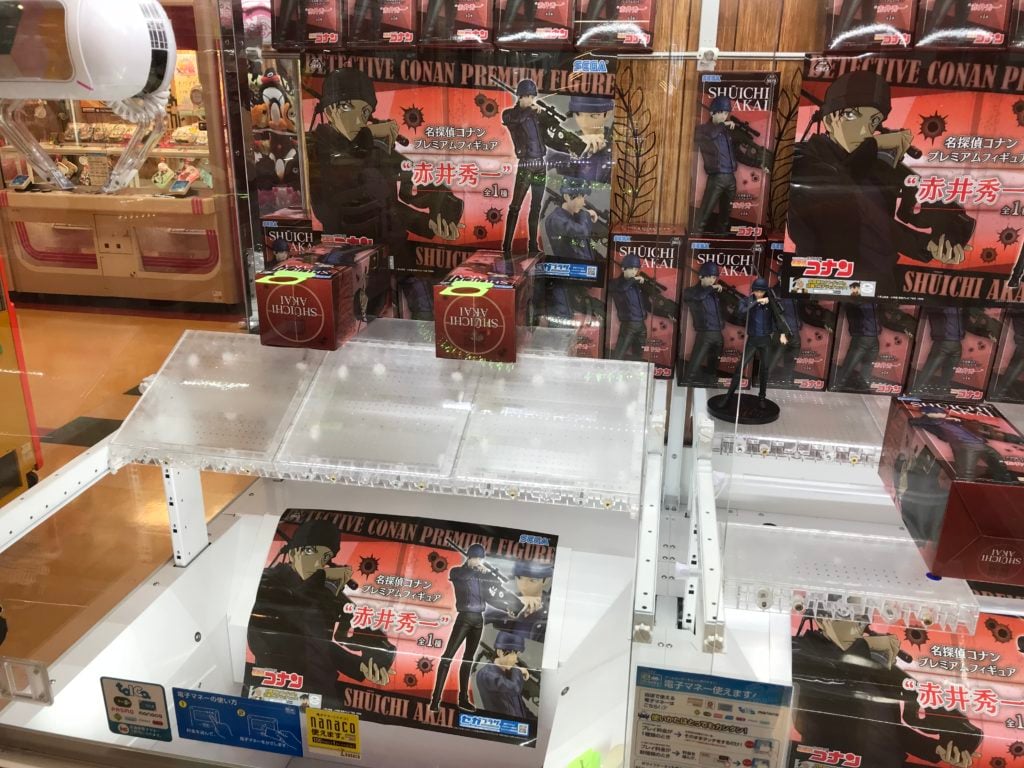 Pull machines are very similar to push cranes, but the prizes in a pull machine are topped with a plastic ring that you’re meant to hook with one of the prongs and drag towards the prize chute. These machines are some of my least favorite. They’re exceptionally hard, just because of how little a prize can move per-credit. It’s not farfetched to spend over 1000 yen at one of these machines, and that’s if you’re skilled. The flip-side is that the prizes for machines like these tend to be worth more, and I’ve seen things like novelty electronics to themed pocket watches. 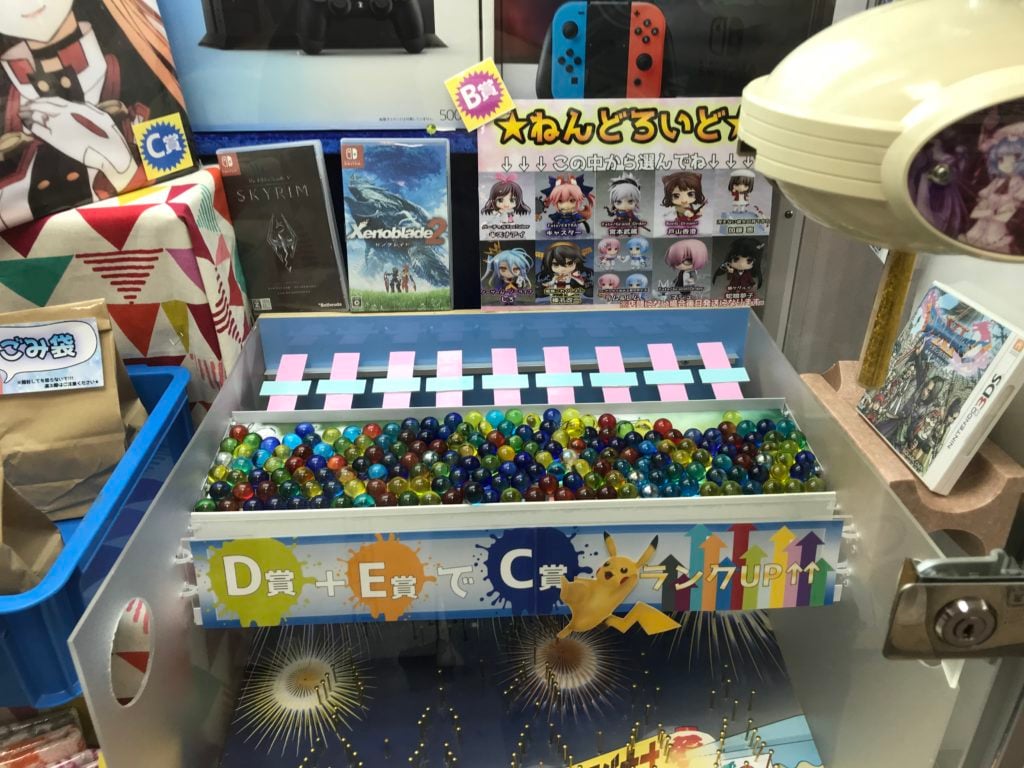 The pachislot style machine is one of my favorites just off flare alone. The crane is outfitted with a plunger or rod instead of a claw, and your goal is to use the plunger to push a lever and release a flurry of glass marbles into the tray below. The tray is riddled with steel pegs and labeled holes, with your goal being to get the marbles to roll past the pegs and into one of the slots.

Your prize payout depends on the slot you land in, and a staff member will unlock the case beside the machine for you to claim your prize. These can range from pieces of candy on the easier to holes to game consoles and expensive electronics for the more difficult ones. The appeal is a lot like actual pachinko; watching the chaos of the marbles as they scatter about before, hopefully, landing in one of the prize slots. 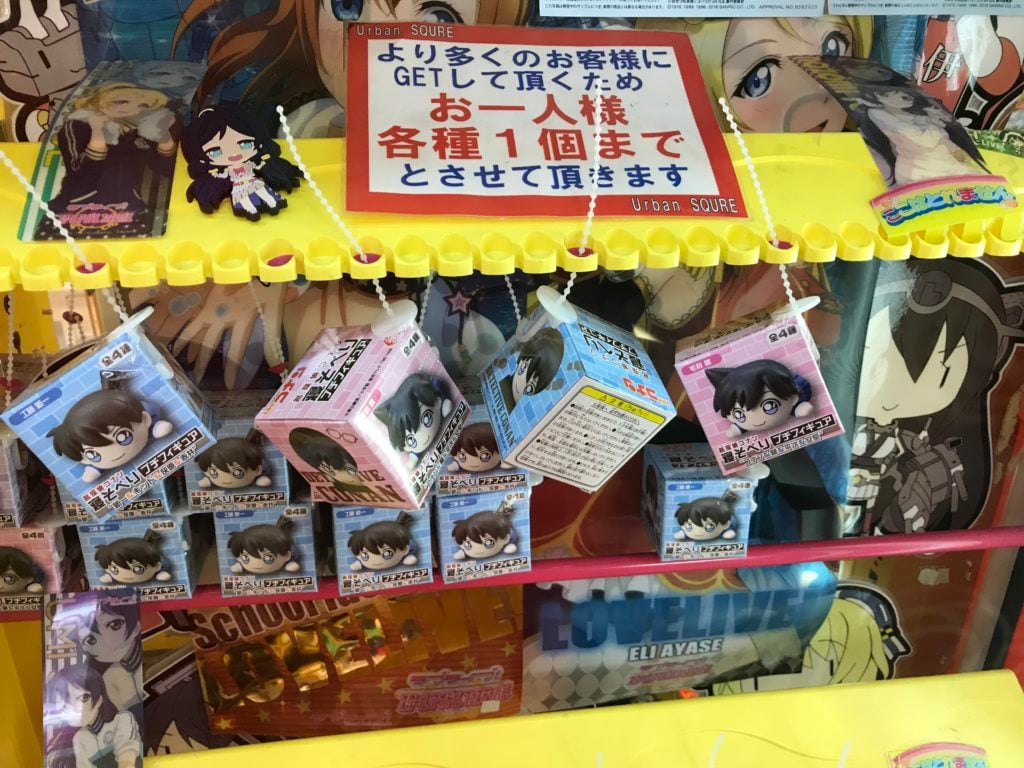 Grip machines are some of the weirdest machines I’ve encountered. Prizes are lined against a wall, dangling from protrusions by beaded threads. You use a pair of tweezers instead of a claw to yank down on the thread and have your prize fall into the pit below. The difficulty comes in perfectly lining up the tweezers with the beads, even a single centimeter off and you’ll miss.

These machines are still arguably easier than your typical prize catcher, so most of what’ll you’ll find will either be cheap candy or small collectibles like keychains or miniature plush. There are other versions of this kind of machine that use a pair of scissors and twine, but the gimmick is the same: get the ridiculously small blades to cut the ridiculously small rope. 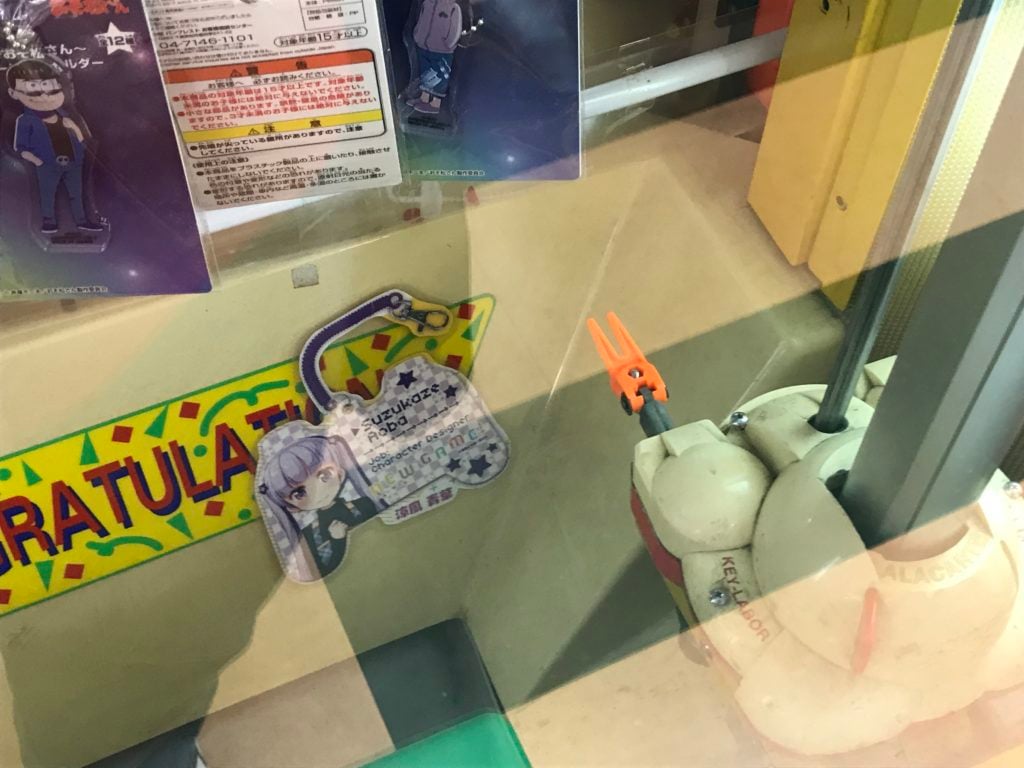 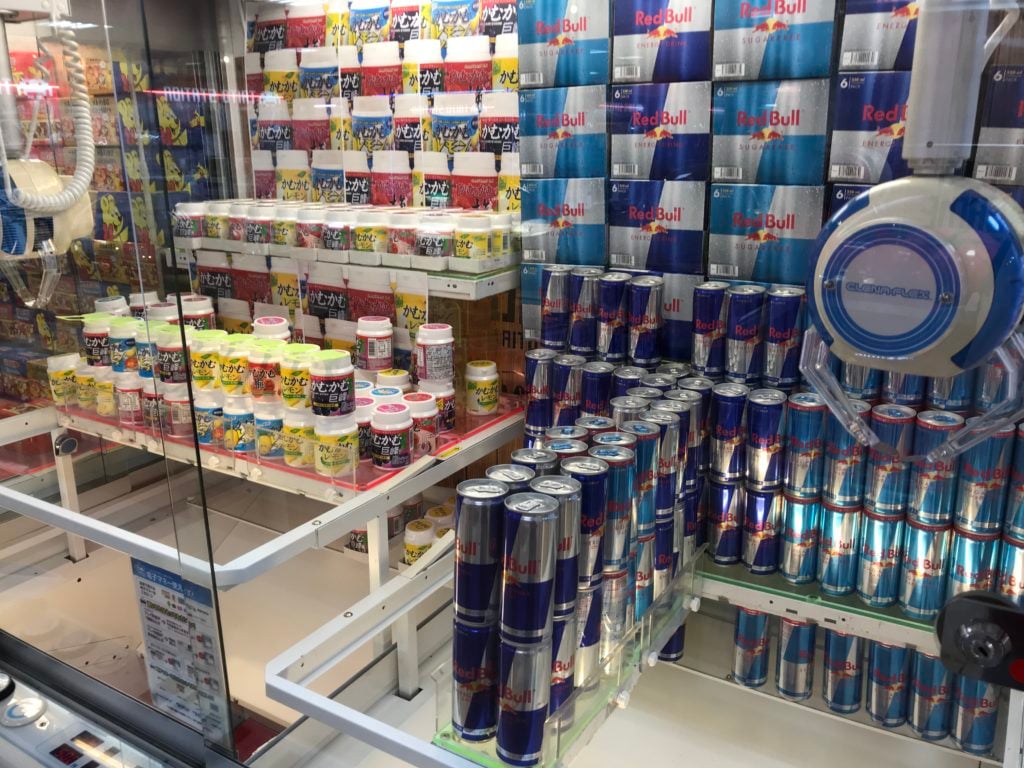 I somehow lost my pictures of a cut machine, so please take this picture of a machine with prizes just as likely to kill you, and an IOU for a future column.

Cutter machines look like crane games from hell. It’s set up like a normal prize grabber, but the claw is replaced with a blade. The prize is suspended from two metal rods by a piece of strong paper instead of being balanced on top of them. The goal is to move the blade over the paper, cutting a little more than few centimeters at a time with it. In contrast, the paper is about 20 or so centimeters long, so you can’t cheese the game by just continually cutting one side of the paper to make it give. The blade can also have a dulled point, making it so you can’t just stab into the paper, forcing you to cut a very thin line across the whole sheet.

The most hilarious part of these types of machines is how barbaric they look. The pachinko style machines just have the crane arm extended down with a cap over the end, but almost every cut machine I’ve seen looks like a do it yourself project out of a Saw film. My favorite so far has been a machine in Tokyo where the owner stuck a box cutter to the claw arm with hefty amounts of duct tape. These machines are deceptively hard, but they’re easy to win with good muscle memory and depth perception. 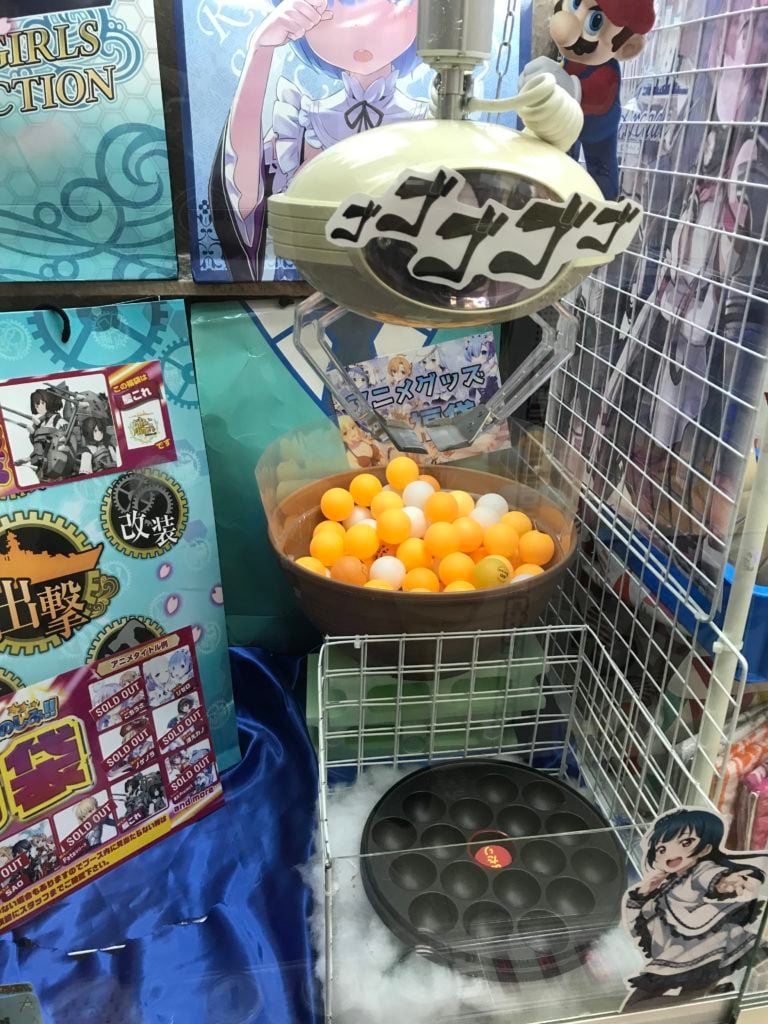 As if the pachislot-style machine didn’t make it feel like you were on “The Price is Right” already, ball drop games truly embody the American daytime game show spirit. These are some of the most complex machines I have ever seen, and I have yet to see somebody win. On one side of the machine is a stack of prizes, next to them is a large bowl filled with ping pong balls, and in front of that is a large tray with rounded craters.

Your mission: to use the claw to pick up multiple ping pong balls and drop them into the tray. If you land in any of the specially marked holes you win, and a center worker comes over and opens the machine to grab your prize. The claws for these machines are bucket-shaped so they can hold multiple balls.

Tips and Tricks for Playing in a Japanese Game Center

Make sure to check back next month when we look at various rhythm and large simulation machines game centers have to offer.

“Check the Map” is a bi-weekly to monthly column that talks about various gaming-related places in Japan. While based in the Nagoya area, Taylor will be checking out different prefectures all across the country to find fun and interesting stores, arcade, and chains that celebrate video games and his other hobbies.