I feel like the concept of arcades in Japan is romanticized for a lot of people unfamiliar with them, at least I know it was for me. I’m no stranger to chains like Aladdin’s Palace that dotted malls across the States in the 1990s. I grew up playing games like Street Fighter, Virtual-On, and House of the Dead on the weekends. And I spent plenty of quarters for extra credits in games like Galaga or Galaxian. I knew not to expect the same thing out of a modern arcade in Japan, but the hierarchy of what is the Japanese game center threw me for a pretty big loop when I first started adventuring out to them.

While there are game centers all across Japan, a lot of the pictures here will be from the three around me in Nagoya. Keep in mind that the two largest game centers, SEGA Game Center and Taito Station, are chains. They keep the same relative layout and games in all their locations across the country. I’ve been able to travel to Fukuoka and Tokyo in my time working in Japan, and the game centers there share a very similar pattern in game choice to the locations in Nagoya. I’ve heard and read many different things about how other people explain the death of the modern arcade in the West, and often times the density of Japanese cities is cited as why game centers are still around. There’s some truth to that, you’re way more prone to find SEGA Centers or Taito Stations in Metropolitan cities, but the health of the modern game center comes a lot from how it’s presented, and not just where it’s placed. 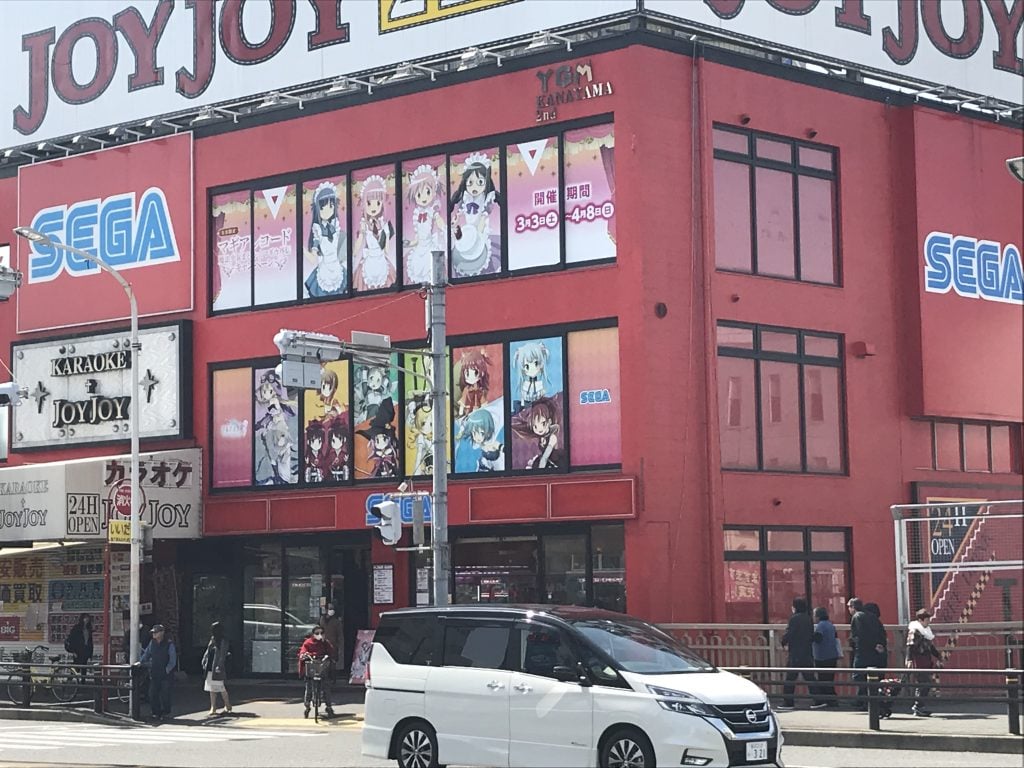 The SEGA Game Center at Kanayama is 3 stories tall and has a karaoke bar in the basement.

For starters, a lot of game centers have a hierarchy to how they place their games. Often times UFO catchers and other prize games will be front and center. These are the easiest things to pull in casual customers. A kid riding the train back from school or a twenty-something walking around town will be more easily enticed by that limited-time Pikachu plush than they would by a Gundam VS. machine. The prizes in these types of games rotate on a weekly to bi-weekly basis, and you can see advertisements for current and ongoing promotions outside of the game centers.

That limited time draw can be really important depending on who or what target audience you’re aiming at. A lot of these prizes aren’t cheap stuffed dolls or fragile plastic toys either. PVC figurines, pocket watches, t-shirts, and knit towels make up only a fraction of the odd things you can find inside different prize machines. There’s quite a market for these too. Street vendors and toy stores will gladly buy stocks of prizes people have won at game centers to resell later once they’re out of rotation. The current hip post-arcade prize to stock is a line of Dragon Quest figures that were available in the spring, and I imagine the Persona 5 gear that’s in rotation now will be stocked at my local Super Potato come the end of the summer. 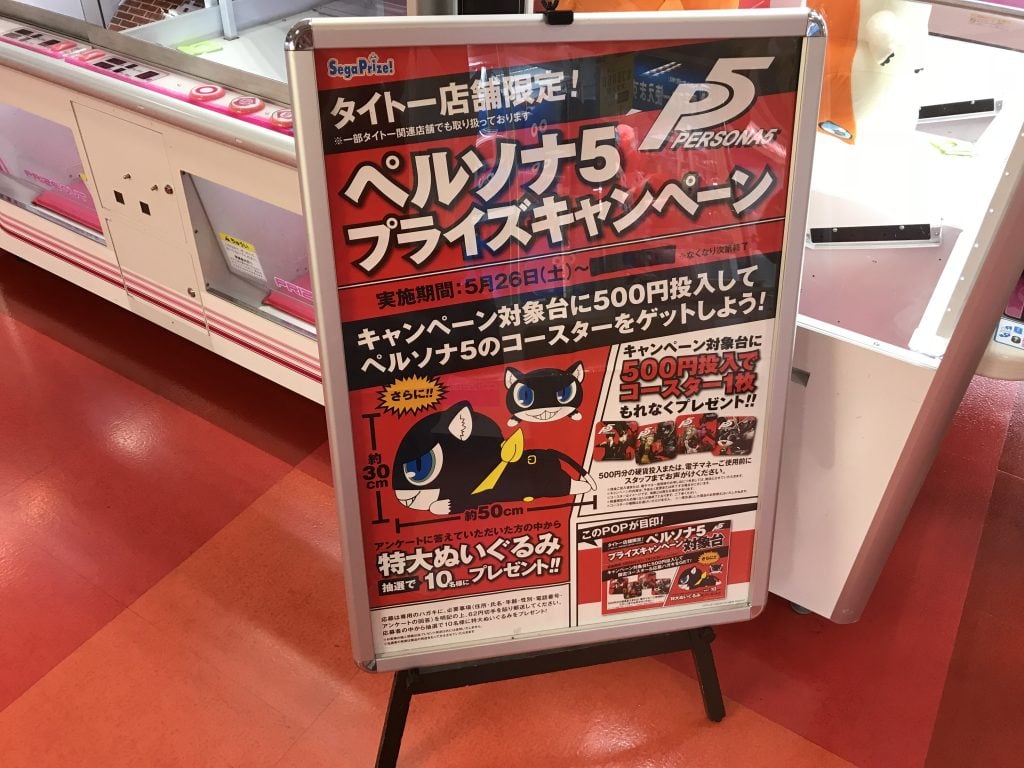 The next floor up tends to be rhythm games and photo booths, experiences you can’t really get at home. Games like JuBeat, GuitarFreaks, and Idolm@ster line hallways with oversized displays and specialized controllers. Your average Japanese household is pretty compact, so you can’t experience a setup the size of a Rock Band kit like you might be able to in the West. The sheer variety in rhythm games is honestly astounding. Digital idol games like Project DIVA and Idolm@ster tend to take up most of the space, but there’s also games like Beatmania and Pop’n Music that have dedicated player-bases. There are also plenty of Rock Band-esque games, with my favorite being a piano-simulator that takes up about as much space as a large keyboard. 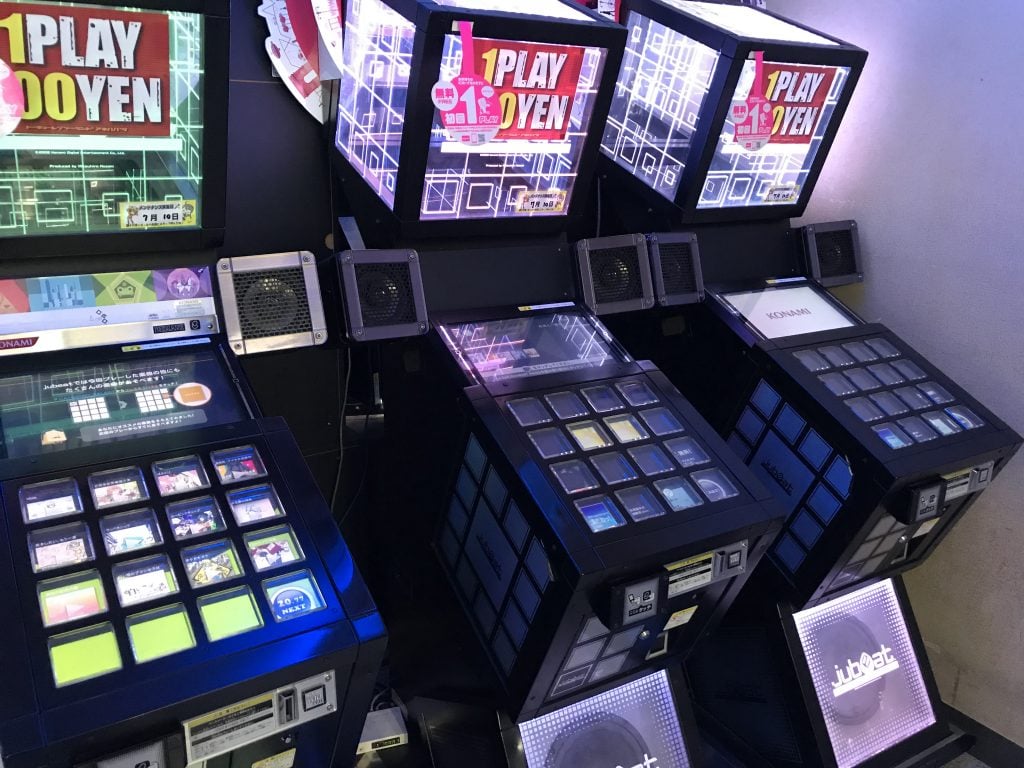 These floors also tend to host a variety of large-scale simulation games or machines that use E-cards. I haven’t really had a chance to play many of these…mostly because they’re pretty expensive, especially the E-card machines. It’s pretty awe-inspiring to see these machines up close, and even more so when you can watch somebody who is good at it. My current game to watch is a war-simulation set during the Three Kingdoms period in China. You control multiple armies and move them by dragging your finger across the screen, issuing different commands in a similar fashion. You’re given a bird’s eye view of the battle you’re in, making it feel more like a game of strategy rather than a hectic mess of flailing your arms around. 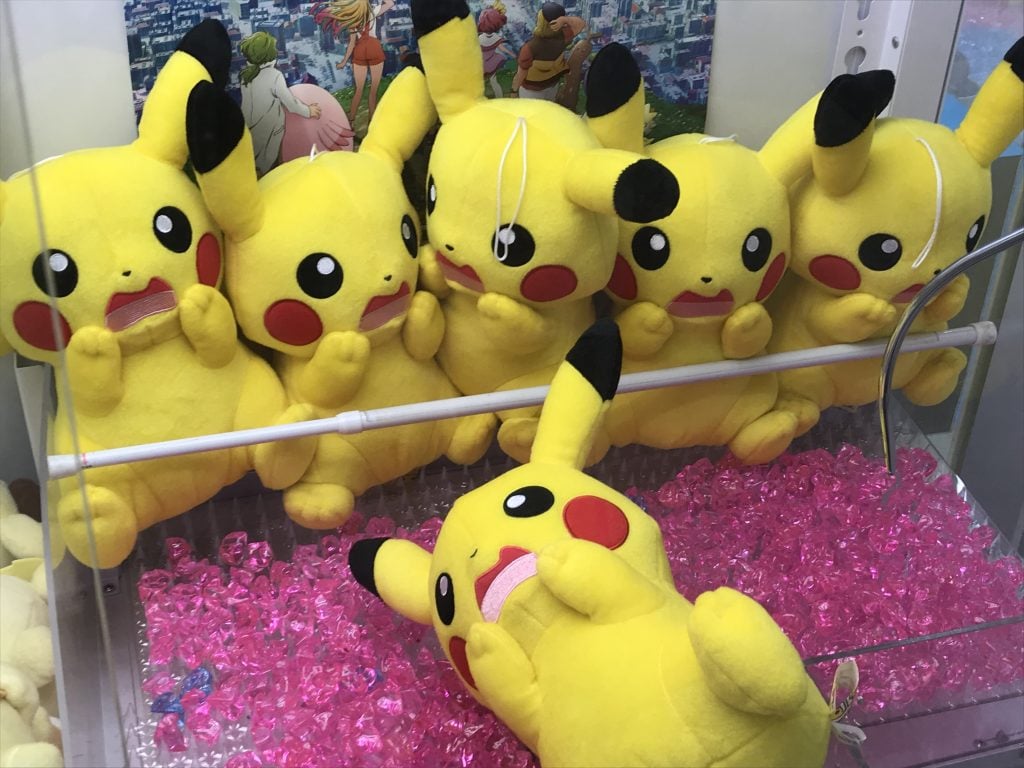 I couldn’t find a way to work these guys into the article, I just find these horrified Pikachus very funny.

The last floors of any game center tend to be dedicated to more “classical” arcade experiences. This is where you’ll find fighting games like Street Fighter or Tekken and other games like various bullet-hell shooters and maybe a beat ‘em up or two if you’re lucky. These sections tend to be dimly-lit, illuminated by the humming screens and LED displays of the various machines lining the walls and aisles of the floor. Posters are taped to the entry way and on the machines advertising different tournaments and events. You’ll often find more of these in game centers that aren’t tied to a chain, and you’ll have to look off the main street sometimes to find that special experience that’s like 1990s America.

Join us next month when we look at the variety of Prize games Japan has, and how to beat them.

“Check the Map” is a bi-weekly to monthly column that talks about various gaming-related places in Japan. While based in the Nagoya area, Taylor will be checking out different prefectures all across the country to find fun and interesting stores, arcade, and chains that celebrate video games and his other nerd hobbies.