How often do you experience a video game with glaring flaws that you still enjoy, even if those flaws remain constant throughout the experience? In today’s digital world full of instant feedback and big opinions, can a game truly just be ‘fine’ anymore? Call of Cthulhu is most definitely full of flaws, but coming to the end credits knowing I’d had a perfectly fine time with it felt like I’d rediscovered an alien concept.

Today’s gaming sphere has devolved into one that can’t call a 6 a 6. Seeing that score on a AAA game means either give it the widest of berths, or attack the reviewer for murdering your favourite series. Spoiler alert: Call of Cthulhu is a 6, and I’m going to explain why that’s absolutely fine.

French developer Cyanide are probably best known, provided you’re not a fan of the Tour De France games, for the Blood Bowl series. A studio’s maiden venture into the survival horror genre is a concept familiar to publisher Focus Home Interactive, which released Dontnod Entertainment’s Vampyr earlier this year. It’s a venture that, much like Vampyr, does things differently-yet-sloppily. However, it marks another promising step forward for a genre trying to freshen things up during a barren period confounded by publisher disillusion.

Cthulhu actually presents as more of a detective game with a horror setting than a true survival horror. It doesn’t have a real combat system and P.I. protagonist Edward Pierce will very rarely be in actual peril. That said, a slow-burner covered by a shroud of misery, madness and the macabre fits pretty well for an H.P. Lovecraft adaptation.

Pierce’s journey to the edge of insanity revolves around the mysterious deaths of Darkwater Island’s well-to-do Hawkins family. Pierce finds himself digging deeper into the case when a client presents him with a batshit insane painting that casts doubt on the “accidental” cause of the fire.

During the opening segment, several things immediately highlight most of the game’s strengths and weaknesses. The immersive tone and aesthetics of 1920s noir shatter once the characters actually open their mouths and talk to each other.

Character models in Call of Cthulhu look absolutely hideous. Lip syncing is a visual cacophony of flailing skin flaps and teeth that clip through mouths, not even coming close to mirroring the dialogue. Model gesticulations are on a Resident Evil 1 level of bad. Repeated renditions of “I’m a Little Teapot” are enhanced with fingers and necks that bend far beyond the level of human physical attainment. It’s actually pretty hilarious, but hilarity is undoubtedly not the ideal tone for a Lovecraftian horror story.

Prepare to see the same characters ad nauseum because they’re all pretty much identical. At first, it was hilarious that every single generic NPC in the game resembled the protagonist with different facial hair. It quickly became so brazen that it seemed as though it was happening on purpose just to mess with the player. So jarring was it that when Pierce kept seeing images of his own visage in random ominous paintings without reacting to them, I expected all would be explained later. Alas, it never was.

If the developers designed the game this way, that’s brilliant . Everyone on the island simply exists a skewed version of the protagonist’s consciousness and may or may not even be real. However, since it never gets addressed, the natural conclusion is that the developer just made about three shitty character models and pasted them everywhere. 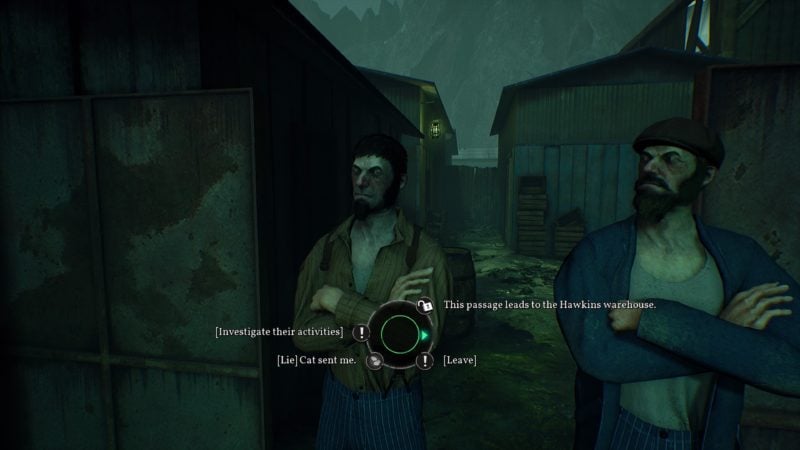 Everywhere you look, it seems like corners have been cut. Cutscenes are jerky and inexplicably at a much lower sound level than the dialogue of the main game. Perhaps the developers meant to force players to turn up their volume during these cutscenes. The jarring, deafening shift back into the in-game dialogue causes one to jump out of their skin. A novel form of jump-scare but likely unintentional.

Of that in-game dialogue, voice lines of secondary NPCs repeat on an endless loop without even a pause for breath. This means you’ll hear the same diatribe restart at least once before you can even walk out of earshot. A shame, as this noise clashes against the impressive vocal performances for some of the more major characters.

One might suspect that people in the game look so dreadful because the budget went to set design and environments, which all look rather decent. Moody lighting augments the murky and morose tone that the flappy-lipped, owl-necked humans try so hard to spoil.

In spite of the disparity between cutscene and in-game dialogue, the game’s music sounds fantastic. Haunting tracks don’t outstay their welcome and get used sparingly to great effect. They allow the growing sounds of Pierce’s madness to take centre-stage alongside a bevy of environmental spookiness. Creaking floorboards and eerie noises bedevil your every move throughout the Hawkins mansion.

Play it as it Lies

Despite all of its failings, Call of Cthulhu succeeds at having some pretty damn fun mechanics. The unique spin of a horror detective title offers some genuinely refreshing gameplay. The game gets so close to being consistently good that it really does elevate the whole experience into a more than acceptable way to spend 12 hours.

The core gameplay loop consists of going through a linear narrative while searching for clues and solving puzzles. There’s something satisfying about scanning the eerie environments without any real interruption from a gameplay standpoint.

A unique feature of the investigative gameplay is Pierce’s ability to reconstruct a scene and piece together what may have happened. It does a fairly good job of fleshing out some of the more important story beats. What makes these segments more immersive is their incorporation of the game’s biggest draw – its RPG elements.

You begin the game by spending Character Points (CP) to upgrade Pierce’s skills and choose the kind of playstyle you want. These skills include: Strength, Investigation, Psychology, Eloquence, Medicine and Occultism. The latter two can only upgrade via CP at the start of the game, meaning you’ll need to find items in the world to upgrade them further. The skills affect various aspects of the game, ranging from how you interact with people, routes you can take, and how you can assess the environment and the aforementioned reconstructions.

Find yourself lacking in medicine, and you’ll have trouble discerning what discarded medication could have meant for its former owner. Stock up on Psychology and Pierce can better decipher what went through the minds of the people he investigates.

The system doesn’t explain itself and some skills can occasionally seem a bit arbitrary (looking at you, Strength). However, skill mechanics get implemented often and diversely enough that spending CP feels like satisfying progression.

Never mind the call of Cthulhu, this woman seems more concerned about the hypnotic movements of her dress

Any horror game worth its salt obviously couldn’t live with itself if it just let the player potter about looking at books while it made scary noises. To that end, Cthulhu forces the player into some pretty heavy-handed stealth segments.

Naturally, failure in any of these segments results in an instant game over. Almost all of them, despite their initial tension-raising potential, end up causing frustration over anything else. The stealth sections are thankfully rare occurrences and the only major black mark on the game’s copybook.

Will You Take the Plunge?

Call of Cthulhu offers a total change of pace from anything else out this holiday season. The price tag, for now, might be a sticking point for some people. Players can still get mileage out of different builds and playthoughs, which result in wholly different experiences and endings. Engaging too much with the occult can fully deplete Pierce’s sanity meter, and seeing what happens in that scenario definitely warrants a second time around. For the fans of H.P. Lovecraft: you could do a lot worse than Call of Cthulhu.

Don’t go in expecting anything other than a slow-paced RPG-lite horror game focused more on mystery and madness than action and jump scares. Call of Cthulhu is a pretty bad video game, but it still manages to be enjoyable in spite of its really, really obvious shortcomings.