The titles of From Software have always been known for their staggeringly difficult boss battles. From Demon’s Souls’ False King Allant, to Dark Souls’ Ornstein and Smough, to Dark Souls II‘s dreaded Sir Alonne, each of From’s pitch black action-RPG sagas has been rife with a bevy of controller-smashingly relentless encounters. However, From may have outdone themselves this time.

The very first boss of The Old Hunters DLC for Bloodborne, Ludwig the Accursed, is enough of a challenge to send even the most harried and persevering of Souls masochists into a fit of rage and depression. As someone who has personally platinumed each of the four Souls games released in the past, trust me that this is far from hyperbole.

In fact, the only Bloodborne boss that even comes close to the difficulty level of Ludwig is optional and easily missed Watchdog of the Old Lords, a terrifying opponent who stands as the last real challenge for those seeking Bloodborne‘s most elusive trophy. However, where the Watchdog of the Old Lords stood off to the side, in a nigh-unreachable spot, far below in the sidequest Chalice Dungeons, Ludwig is all the more infuriating for being directly in the way of player progression. 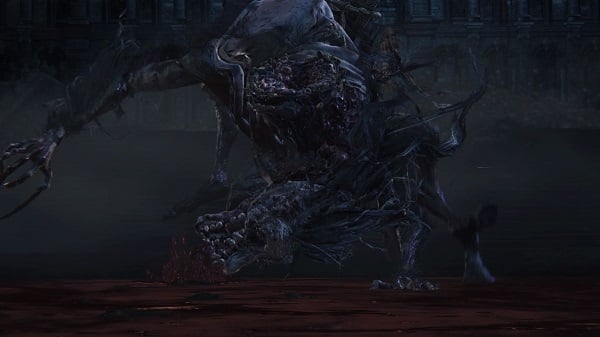 You cannot gain any further ground in the DLC without first dispatching Ludwig, and this is a task which is far easier said than done. Even the most talented and legendary players in the vast community of Bloodborne‘s hunters are almost taken down by the great and unsightly creature. Don’t believe me? Check out the video below, or any of the videos posted on YouTube thus far and watch the health bar. Even the players who are creating the walkthroughs for this boss often find themselves a hairbreadth away from the icy grasp of death.

Maybe it should come as no surprise as Ludwig is easily one of the most recognizable names in Bloodborne‘s murky in-media-res storytelling, but even showstoppers like the titular Artorias of Dark Souls fantastic Artorias of the Abyss expansion didn’t pack so much of a wallop as this. Ludwig makes his entrance as a deformed creature wading through a river of blood, surrounded by the endless and ancient piles of the thousands he has slain but even that can’t prepare players for what they’re up against: unbelievably, Ludwig can even one-shot players who are far past the threshold required to beat the game.

Furthermore, Ludwig might also have taken the shriekingly ferocious Vicar Amelia’s title of the most horrifying and disturbing boss in Bloodborne‘s Lovecraftian ensemble. A writhing, seething, and screeching nightmare, Ludwig is the epitome of a fallen hero, crafted as a despicable wretch so pitiful as to clearly cement the long-recurring theme of From Software mythologies in which no good or selfless deed goes unpunished.

Take heed if you’re planning on tackling this DLC, although The Old Hunters has attached itself as a valuable expansion to what just might be the 2015 game of the year, it is not at all for the faint of heart.