Art-driven games have really risen to prominence in recent years. It’s a world where games as impactful as The Beginner’s Guide and Night in the Woods eschew any focus on gameplay in favor of telling a meaningful narrative, and exploration-based games like Abzu and Journey implement simple controls so as not to detract from the user experience. Then there are games like the critically-acclaimed walking simulator What Remains of Edith Finch which combines both approaches in a masterclass of visual storytelling.

As wonderful as an art focus in games can be, it works better for some genres than others. The beauty of Shu’s art and character design is undeniable, and the game’s atmospheric soundtrack sets the stage for a magical yet somber journey. However, the mark of a great platformer is tight controls, intuitive level design, and reliable mechanics. It’s here where Shu begins to stumble. 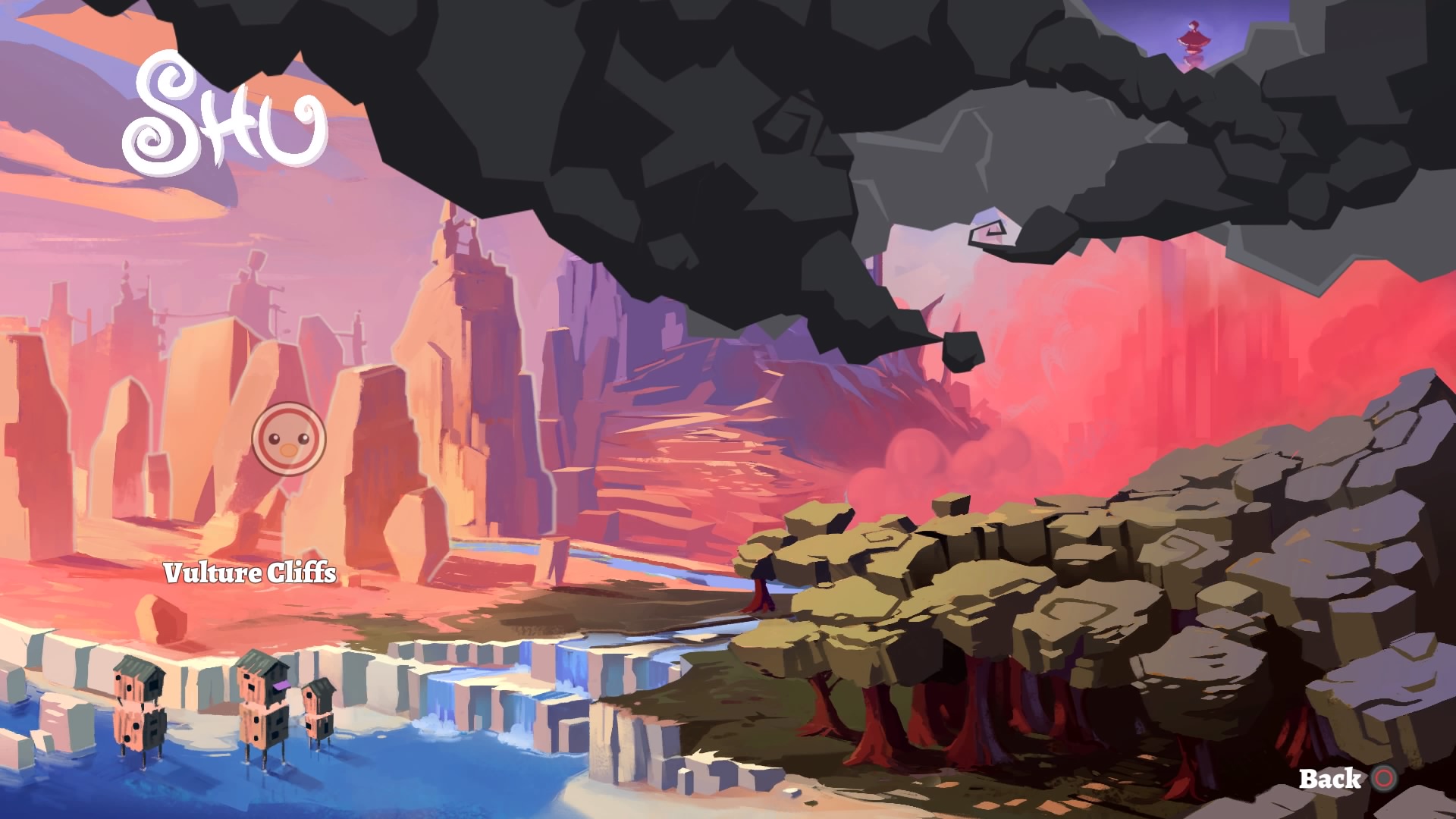 Shu follows the story of a young bird whose village is threatened by a menacing evil force known only as “the Storm.” After he’s separated from the rest of the village during an evacuation, Shu sets out on a little adventure to escape from the Storm and find sanctuary. Along the way, Shu comes across stranded refugees from his village and brings them along for the journey. Each of these characters has unique abilities that allow players to interact with the environment in new ways. The best of these are truly inspired, like the ability to run across the water’s surface or slow down time. Others are more standard platforming fare like the ability to double-jump or ground-pound but still manage to feel special due to how infrequently players can use them.

The Storm as an antagonist is at once one of the most unique parts of Shu and one of the most frustrating. It typically comes in towards the end of a level after a player has passed a checkpoint (which replenishes the player’s six lives). The Storm is meant to inspire fear in players and create a sudden sense of urgency as it chases Shu across the screen. In practice, however, the Storm’s AI is quite unpredictable and inconsistent. Strategies and pacing that might work for one run can fail during another. This resulted in several underserved game-over screens at different points throughout the campaign. While exciting in theory, I came to dread the Storm far more than the game intended me to.

Shu boasts five locations in the core game comprised of a few levels each. These range from ethereal forests to futuristic cities, each boasting its own unique mechanics and design quirks. Most of these mechanics work well, but some poor design decisions (particularly in the game’s final location) along with some inconsistent special ability inputs led to countless cheap deaths. This is especially the case when the very last level in the game sees a dramatic difficulty spike. Unfortunately, some of the best-designed levels come as part of the free “Caverns of the Nightjars” DLC that is only unlocked after players finish the main story.

Each level can be completed in under 10 minutes if run straight through, making Shu an especially ideal fit for the Nintendo Switch’s portable nature. Those looking for more of a challenge can try their hand at finding a number of different collectibles including butterflies, baby chicks, and incredibly well-hidden runes. Unfortunately, that’s the only reason most players will have to replay Shu; once the four-hour campaign is over, it’s over. Where Shu shines is its vibrant visuals and simply lovely OST. Nearly all of the locations feel like they’re teeming with life, and the sound design does a great job of enveloping players in Shu’s ancient world. Each of the accompanying villagers are cute and visually distinct, but end up not being particularly memorable due to the lack of character introductions and the short amount of time players get to spend with each villager. Though certain abilities stand out more than others, the villagers end up feeling more like tools than actual characters. Shu and the rest of the cast animate beautifully and really pop off the screen, though their running animations do come off as a bit stilted.

Shu is a fun yet unremarkable 2.5D platformer. Its focus on pretty art and music over reliable mechanics and tight level design comes as a serious detriment to the game’s overall playability. At a time where Cuphead captivated the gaming world with its perfect balance of gorgeous aesthetics and stellar gameplay, Shu’s inability to do so feels even more damning. The free DLC makes the package worth its $10 price tag, but one can’t help but feel that Shu could’ve used a bit more time in the oven.