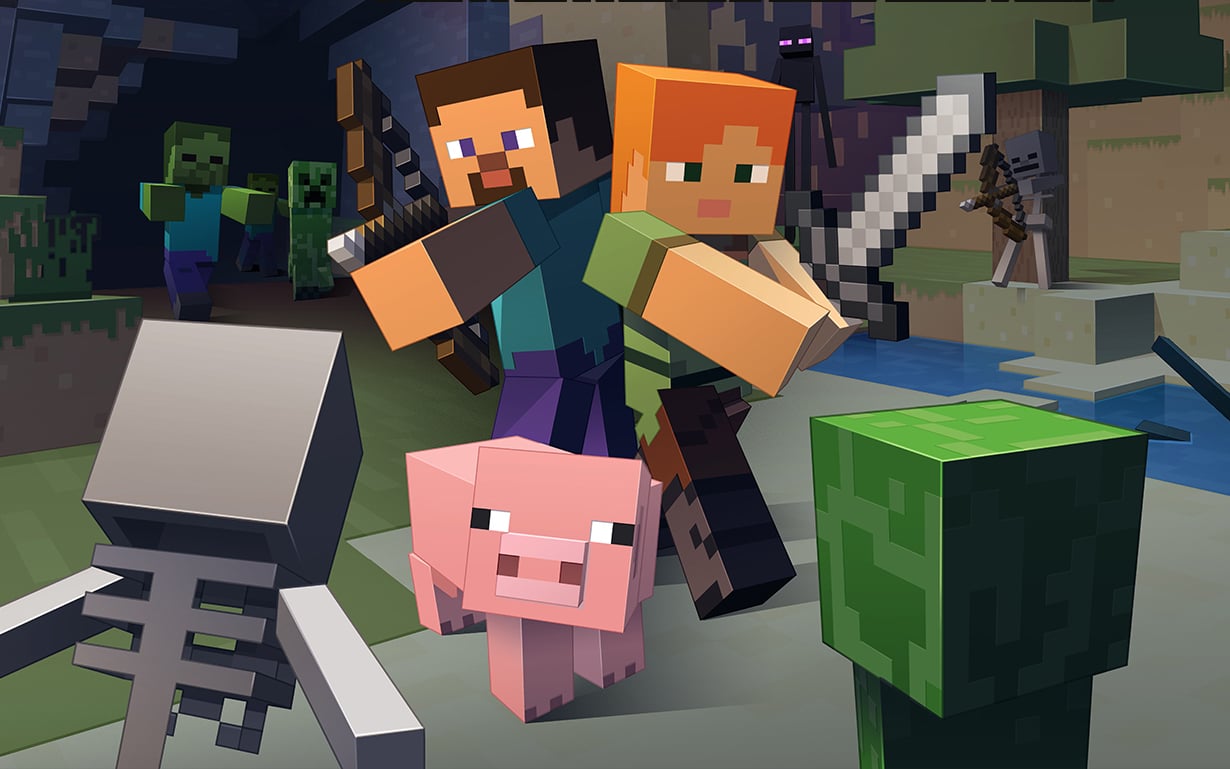 The Nintendo 3DS is now firmly in Nintendo’s rearview mirror and the runaway success of the Switch has indicated that the dedicated handheld market belongs solely to Nintendo’s hybrid console. In 2017, things were quite different and Nintendo depended on the 3DS to bridge the gap between the inept Wii U and their next generation of hardware. In that vein, they launched several interesting titles on the portable system through the beginning of 2019, most of them ports and remasters of existing tiles.

While some of these are intriguing, especially the Luigi’s Mansion port that Digital Foundry covered in a fascinating article back in 2018, one project that deserves a closer look is 2017’s Minecraft: New Nintendo 3DS Edition, a New 3DS-only port of Mojang’s successful sandbox game. Leveraging the power of the ‘New’ 3DS line, the port team at Other Ocean Interactive was able to work magic with primitive hardware and create a perfectly serviceable port of this classic game that, while not universally acclaimed, should be lauded for its ambition and scale.

It’s worth a bit of a rundown on the 3DS hardware before we dive too deep into what makes Minecraft: New Nintendo 3DS Edition such a wild success. Originally announced in 2010 and released in early 2011, the first model of the Nintendo 3DS was primitive, even for its time. The first models of the 3DS (e.g. the 3DS, 3DS XL, and 2DS) used an ancient ARM11 design originally released from 2002-2005, packing a dual-core setup clocked at 268 MHz, and 128 MB of FCRAM, and a 268 MHz PICA200 GPU with that lacked programmable pixel shaders.

The updated ‘New’ 3DS model improved system in a variety of different ways, increasing the VRAM from 6 MB to 10 MB, doubling RAM to 256 MB, doubling CPU core count from two to four, and increasing clock speed from 268 MHz to 804 MHz on said cores. Nevertheless, the GPU was left the same, assuredly to allow developers to use the extra CPU cycles to achieve higher framerates if they wished without needing to fork the user experience too heavily.

Due to how Minecraft processes chunks and more easily hits CPU rather than GPU limitations, the decision to enable support only for New 3DS systems makes sense. The extra two cores and enormous clock speed might have been the only way for developer Other Ocean to get the game running at all. With no previous games published on 3DS and the ubiquity of a mostly playable Minecraft experience on other platforms, the decision to focus on creating a port of Minecraft for only the New 3DS makes sense in hindsight.

While a custom-built version of Minecraft that bridged both SKUs of the 3DS could have surely been created, the need to use an already built version of the game (Pocket Edition Alpha 0.15.4 according to Destructoid’s review) and the limitations of needing to release the port before the 3DS was too far along in its lifecycle sure contributed to the sort of port we received.

That being said, impressions of the port are…interesting. After an update in 2018, the game received support for 60 fps in the base game and 30 fps in the ‘Super Mario’ edition map. However, even after the update, frame pacing is inconsistent. As new chunks are loaded in and the CPU is stressed as the player zooms around in Creative, the framerate seems to tank into the 30s in the base game and into the upper teens in the ‘Super Mario’ edition maps. I’m not a human frame counter and these results could be off, but the hit to input lag is noticeable and frustrating.

However, outside of Creative mode, the game runs relatively fine, positing a perfectly playable version of Minecraft that doesn’t feel significantly different from its console and PC brethren. Even visually, the game works well, with texture work that is delightful given the draconian limitations of the 3DS’ frame buffer. On the 3DS’ 240p screen, Minecraft looks relatively sharp and well-rendered, with only my 2DS XL’s tepid TN panel dampening the experience.

The greatest detriment to the New 3DS version of Minecraft is the very small render distance. At best, it’s an atmospheric addition that makes what can be an already tense game a bit more frightening and, at worse, it’s incredibly distracting and, worst of all, disorienting, making finding your way back to base, even while using the bottom screen’s map, quite difficult. Using the screenshot feature on my CFW New 2DS XL, I was able to capture a couple of screenshots which shows off the main problems with the system’s draw distance.

I decided to throw Minecraft: New Nintendo 3DS Edition into Citra to see how the game performed when the bottlenecks of running on an actual console were removed. Using GodMode9 to dump my cartridge (don’t pirate, kids!) and pushing the resulting .cia file to my desktop, I discovered that New Nintendo 3DS Edition runs relatively well in Citra, despite the broken sound (sadly common in 3DS emulation).

The resulting output, rendered at 6x native resolution, gives a bit of a glimpse at the tricks that Other Ocean used to improve performance when possible, with trees lacking noticeable transparency effects and even textures until the player is right on top of them. LOD distance is obviously very small, with textures not rendering in even thirty or forty blocks from the player. While these issues are noticeable when blown up to 1440p on a 34″ monitor, they are far from an issue on the 3DS’ tiny 240p screen.

Note that these results are far from final as New Nintendo 3DS Edition doesn’t rate very highly on Citra’s compatibility chart and–well, if we’re being honest–emulating a 3DS port of a PC game on a PC probably doesn’t make much sense, to begin with.

Some will likely take issue with me calling Other Ocean’s Minecraft: New Nintendo 3DS Edition an “impossible port” in the vein of Panic Button’s amazing ports to Nintendo’s newer handheld. Nevertheless, given their lack of experience with 3DS development at the time and the extremely archaic nature of Nintendo’s last-gen handheld (again, they stopped producing new ARM11 chips in 2005!), I’m willing to call Other Ocean’s work here a great port.

Sure, it lacks features that are available on even the most anemic of somewhat modern Android phones, runs at a lower resolution, and overall looks worse that pretty much every other version of the game, but it is also a fully working version of Minecraft on not only an ARM system (a dramatic departure from the x86 platforms that Minecraft was originally developed for), but on a platform that is dramatically less powerful than most phones from 2017.

That development in and of itself is enough for me to consider this a success by Other Ocean, a testament to the flexibility of Minecraft as a concept and an even further indictment of the tendency toward poorly thought out and even more poorly executed “cloud versions” of games on Nintendo’s current-gen hardware. If even an inexperienced developer can release this good of a port, then there’s no technical reason why more experienced and seasoned game developers aren’t given the chance to prove their chops on more difficult Switch ports.