(Warning: If you care, this list contains a minor boss spoiler for the “Adventure Mode” in Tennis Aces)

The most common, standard enemy in any Mario game, and also the namesake for this very site.  Yes, I speak of a Goomba.

So what gives? Yeah, Goombas appear as NPCs and background scenery in Mario Tennis Aces, but I believe that these little guys deserve more time in the spotlight. Reparations for all the years of stomping need to be made. 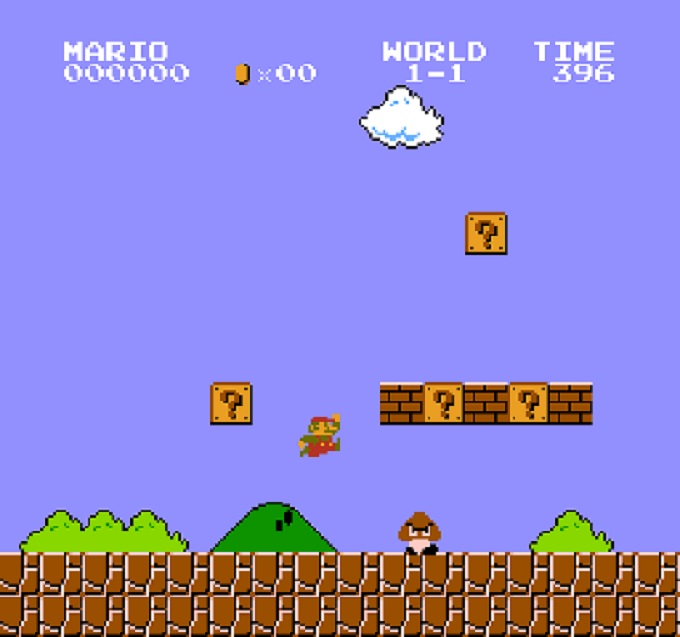 A Goomba is the first enemy you ever see, and the first character outside of Mario/Luigi you see, in World 1-1 in the first “Super Mario Bros” game — that’s pretty important

But, OK, let’s face it. There’s a problem. Arms. Goombas don’t have them. They do in this one image I found online but I have no clue where the hell it comes from (and kinda don’t want to know?). This hasn’t stopped them from playing baseball with levitating bats in the past, but that’s lame.

Still, if a Chain Chomp can tromp around the court with a racket in its mouth, so can a Goomba. So, yeah, that or duct tape one to its side or give it some sort of racket hat. I don’t care, anything is possible. I just want to see it use its tiny little legs to try and keep up with the ball.

As for type, Goomba could work as a light-weight “defensive” type character, as the game is currently lacking in those types. Plus, it fits how I imagine a Goomba would play tennis. Which sounds like a sight. What also sounds like a sight is if the Special Shot had our Goomba getting on top of a Goomba Tower. 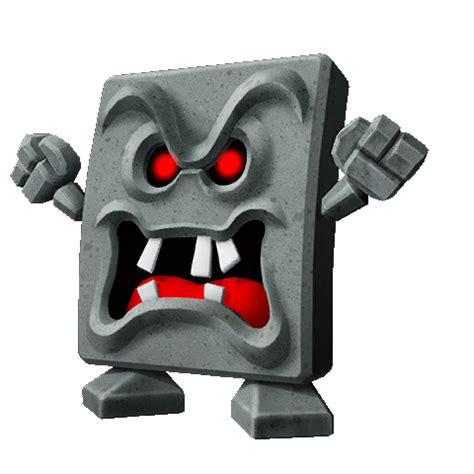 But just think about how great it would be to see Whomp shimmy side to side to reach and whack back a ball. And Whomps aren’t just walls, they’re determined little (big) go-getters, with goofball, often care-free personalities to boot, who just happen to be walls.

Born as a kind of 3-dimensional cousin to the classic Thwomp enemy, Whomps have been around the block quite a lot since Mario 64. While it’s hard to imagine Whomp playable in a game like Mario Party (where it has appeared in one form or another in every installment of the series), Tennis Aces‘s gameplay lends itself really well for this kind of adaptation. 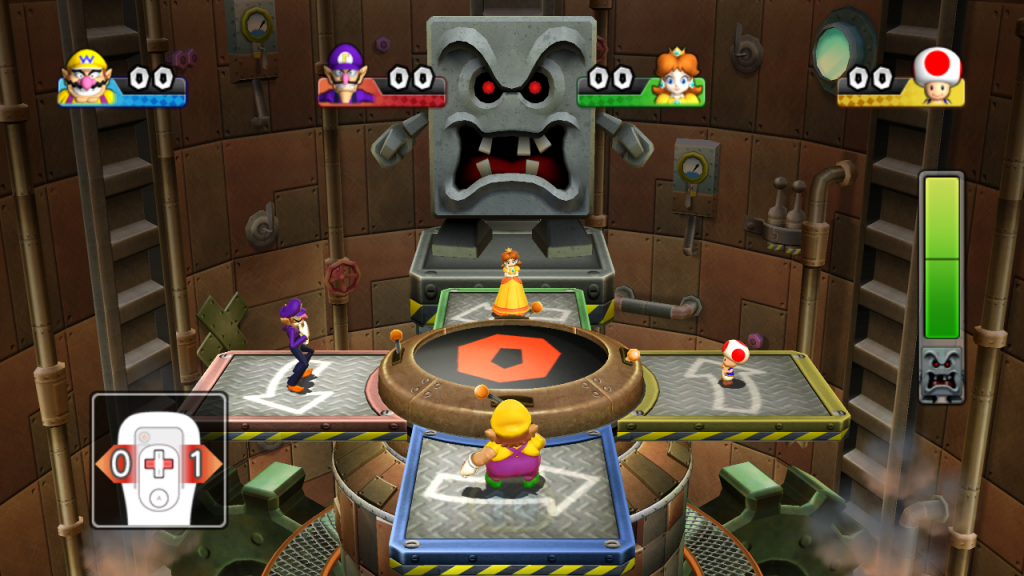 We might have to scale his proportions down a little (“Mario Party 9”, Wii)

Whomps come in all shapes and sizes throughout the Mario series, so the character’s exact size doesn’t really matter, either. Hell, it would be cool to see a miniaturized version of King Whomp instead of just a regular Whomp in this role.

If you’ve played Tennis Aces‘s “Adventure Mode”, you might be aware that a Whomp does actually appear in the game as a boss fight, but not as an actual character. Instead, Whomp in Aces is more like a hardly-animated cardboard cut-out that moves side to side in what is perhaps the lamest boss fight in the entire game. So, let’s fix that, please.

I imagine Whomp as either a strong “defensive” type (I mean, it’s a wall) or just a “powerful” brute strength type character. There’s even potential for a Thwomp to make an appearance during a Special Shot. 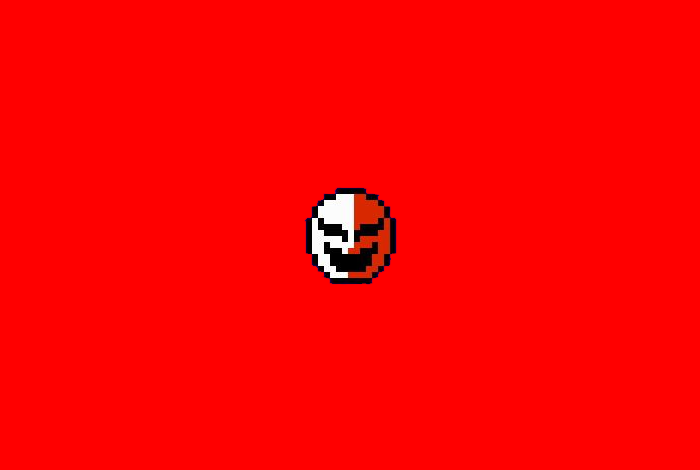 If Death was personified in the “Mario” universe, it would probably look like Phanto

Anyone who has played Super Mario Bros. 2 (or Yume K?j?: Doki Doki Panic) or knows anything about it, recognizes the Phanto mask enemies as the personification of all that is evil and unrelenting in the world. Who better to invite to your tennis match?

Phantos are perhaps one of the more interesting Mario 2 enemies. They’re like evil guardian spirits that haunt those who touch ancient treasures (well, keys) as a kind of curse. How they move in Mario 2 and come after the player is very reminiscent of the Angry Sun introduced later in Mario 3, but I’m not sure how viable it is for the Sun to play tennis.

Phantos have never been seen in any Mario game outside of Mario 2 and its ports, remasters, remakes etc., which is such a waste. So, I’d love to see a Phanto make a surprise appearance once again. 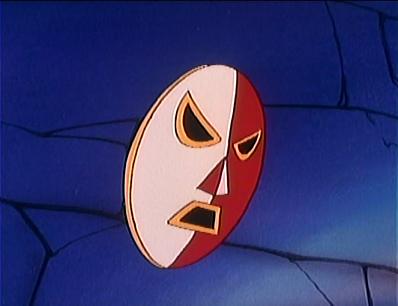 The only real “3D” (as in, not a flat sprite) appearance of Phanto is in “The Super Mario Super Show”, where it looks more like a luchador’s mask

While like a Goomba, a Phanto doesn’t have arms (or a body), it’s not hard to imagine and makes more sense for a levitating racket that would serve that function. I’d imagine Phanto as a fast and “tricky” character type, but a case could be made for it being a “powerful” type. It might seem odd for a floaty mask to be “powerful” but at the same time, they do give off a kind of evil spirit strength vibe.

Beyond Tennis Aces, I’d just love to see these guys show up in any Mario game.

Artwork of a Mario-possessed Uproot in “Super Mario Odyssey”

Despite my well-documented unimpressed take on Super Mario Odyssey (tl;dr: I think it’s a really fun game with a lot of great ideas but it’s not to my liking compared to previous 3D Mario titles), I love some of the neat little enemies introduced in that game. Even if they made their debuts alongside one of the worst designed enemies in the entire Mario series.

A few of these enemies I’ve been hoping to see become new staples in spinoff Mario titles and the most prominent out of those has to be Uproot.

First encountered in the Wooded Kingdom, which we can assume to be their hometown, these little onion guys can stretch to become really tall with their extending root limbs; of great use to Mario and Cappy in Odyssey. And, there’s a whole boss fight centered around making use of a captured Uproot, an honor bestowed on only a few of Mario’s victims. 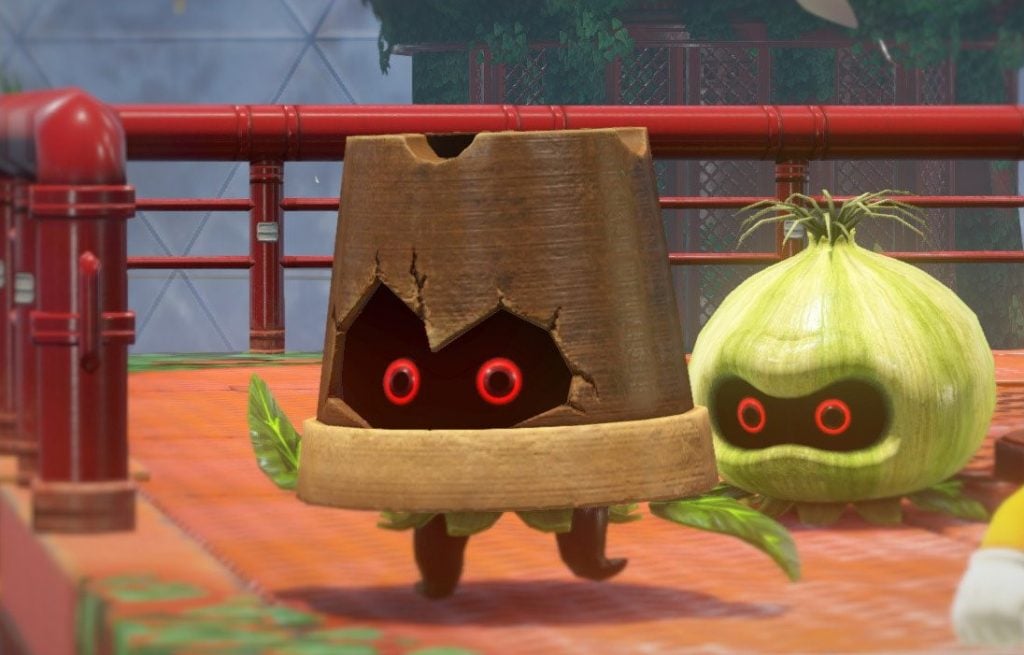 Uproots tend to chill out with a pot over their heads until knocked off by Mario. I think they can ditch their pots for a game of Tennis, though (“Super Mario Odyssey”, Nintendo Switch)

I really like these little guys, enough to say that I’d even want a puzzle game centered around their stretching mechanic in Odyssey. And while that might be a, yes, I’m going to say it, stretch, I don’t think seeing them make an appearance in Tennis Aces is all that unreasonable.

Considering that Blooper is a playable character in Tennis Aces, it wouldn’t be that out-of-place to see Uproot rally a ball back. In fact, it’d be pretty awesome to see them stretch around all over the court.

I’d imagine Uproot would have an incredible reach, so a “technical” character type would be most fitting. Unless we can create a new kind of type for them….”stretchy”? “Elongated”? “Longboy”? 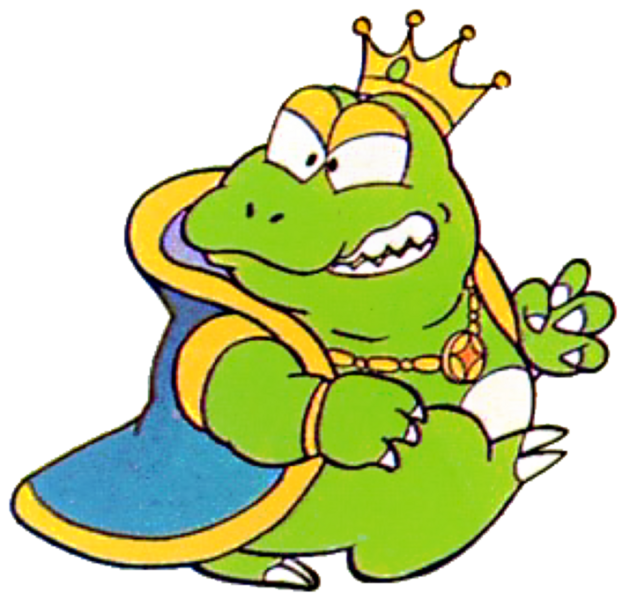 In my article about the 5 Mario characters that I want to make a comeback in the series, Wart reigned number 1, as he deservedly should.

As the main Dream Machine-hijacking villain of Super Mario Bros 2, there was a small period of time where he dethroned Bowser/King Koopa as Mario’s biggest concern, and we haven’t seen him return to that former glory since.

Wart is rather different than other enemies, a shared commonality among Doki Doki Panic-origin character, but also fits really well within the expanded Mario family. Or rather, would fit really well if Nintendo would ever use him.

But as I mentioned, unlike Shy Guys, Birdo and other characters, and similar to Phanto, Wart falls in the camp that hasn’t seen a single appearance since Super Mario Bros 2 (save for the remix-ish sequel thing, BS Super Mario USA, and remasters/remakes of Mario 2, such as Super Mario Advance).

Well, he did make a cameo under his Japanese name, Mamu, in The Legend of Zelda: Link’s Awakening (fits into the whole dream theme), which was pretty cool since it gave us this amazing official art for that version. 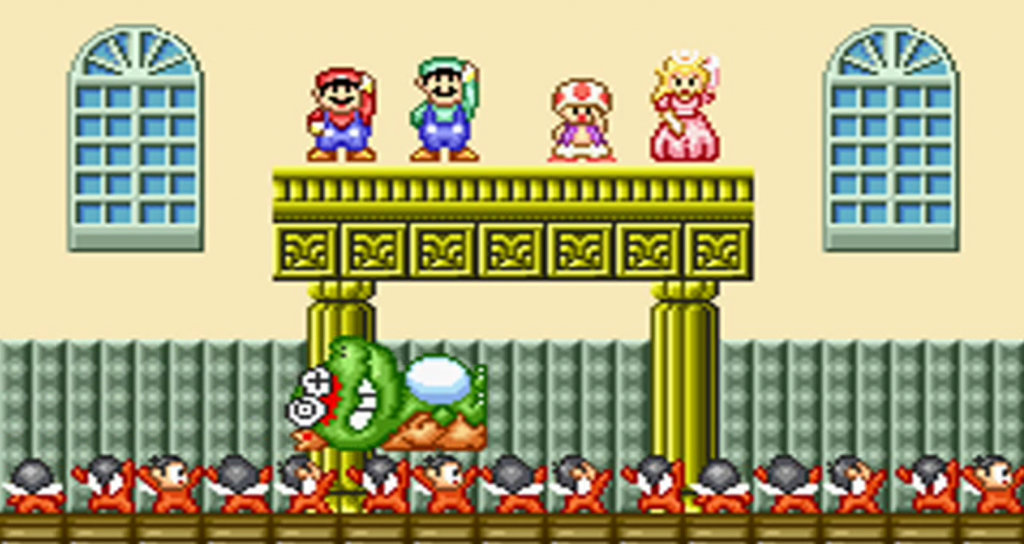 Wart’s defeated (and bloody?) body being taken away by muus who’ll do who knows what to him as punishment (“Super Mario Advance”, Game Boy Advance)

I believe he has incredible potential in a game like Mario Tennis Aces. While he’s hefty like Bowser, I don’t see him as a “powerful” type, but rather more “technical” or even leaning toward an “all-around” character. Spike serves as a tiny yet “powerful” type in Aces, so it would be good to have bigger characters that aren’t just relegated to “powerful”.

Sadly, I think this one is perhaps the most unlikely addition to Aces possible, which is why Wart lost the number one spot. He’s still number 2 on this list because I have to dream. It’s what Wart would want. 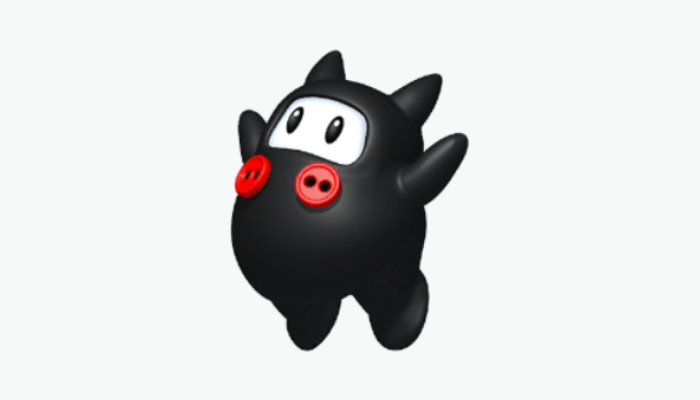 Yet another Mario 2 enemy character, but Ninjis have a much richer history within the broader Mario world since 2. While not utilized the same amount as say, Shy Guys, Ninjis were one of the few characters from Mario 2 that made an appearance in a mainline Mario game, in Super Mario World.

Since then, they’ve appeared in the Paper Mario games, but their most recent appearance comes in Super Mario Run of all things.

But what are these weird guys really? Aside from being adorable in their onesie footy-pajama looking suits, with those big red nipple buttons, they’re…ninja devil ghosts who are described as haunting the dreams of NES fanboys. I have no clue why or what that means exactly, but that’s what it says in the instruction booklet for Mario 2.

A Ninji as it appears in “Mario & Luigi: Paper Jam”; if you deny this creature’s charm and cuteness, you are a wrong person.

So, yeah, they’re awesome and deserve a bigger spotlight. And what better way to earn that spotlight than by playing some tennis.

Within Mario Tennis Aces, I imagine them as a fast, “Speedy” characters, but perhaps “Technical”, or a tendency toward it would work as well. They’re fast and nimble, but also give the appearance of being childish and clumsy, which would be really great to see in animations. Of all the weird Mario 2 characters I love, I see Ninji as the most probable, hence its spot in number 1.

And that’s for my list, but what do you guys think? Which characters would you like to play as or have a match against in Mario Tennis Aces? Did you like my list or do you hate my opinions? Say what you must in the comments!