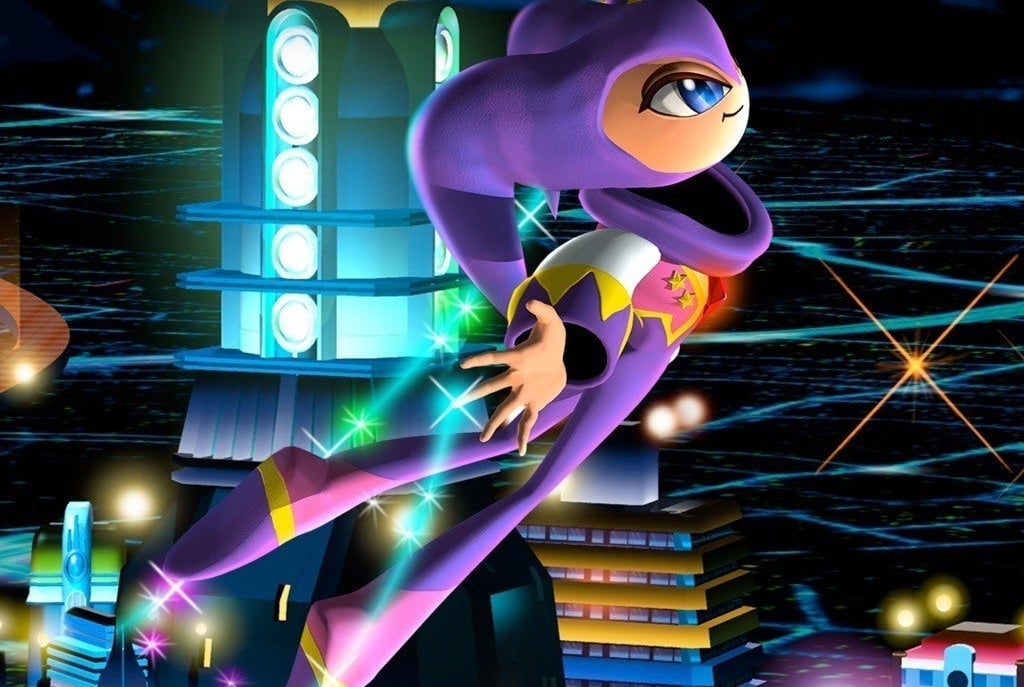 Released back in 1996 on the Sega Saturn, NiGHTS into Dreams stood boldly against many of the gaming industry’s trends at the time. Like Super Mario 64, NiGHTS into Dreams was its respective console’s flagship title, but while the aforementioned Mario title was part of a long-established IP, NiGHTS was a completely original creation. Major releases were trending toward featuring longer campaigns set in fully explorable 3D environments, but NiGHTS into Dreams was a short, arcade-like experience played mostly through a 2D perspective. Gaming mascots throughout the 1990s boasted designs that were “cool” and “hip,” but the jester-like NiGHTS had a playful, almost angelic appearance.

As a marketable product, the game was practically the antithesis of what many mainstream game enthusiasts were looking for, at least in the West. As a piece of art, though, NiGHTS into Dreams remains one of the most compelling experiences that Sonic Team and Sega as a whole have ever put out, even 25 years later.

A significant reason why NiGHTS into Dreams is such an interesting title is that it features a rather unconventional gameplay loop. In fact, the gameplay is so unique that it can be quite difficult to grasp at first, especially since in-game tutorials are practically nonexistent. Essentially, players take control of NiGHTS as they fly through the skies on a fixed 2D plane, weaving through rings and collecting whatever items they happen to come across. NiGHTS flies toward whatever direction the analog stick is pointing, and they have access to a dash that can be used to gain speed and barrel through objects or the few enemies that exist in each stage. Every level is split into four sections, each of which requires players to collect 20 blue chips, bring them toward a floating cage, and travel back to the starting position within 120 seconds.

This is the basic premise of NiGHTS’ gameplay, but players are unlikely to fully understand the level design and mechanical nuances on an initial playthrough. The 2D plane that players travel through twists and turns in unexpected, almost disorienting ways, which makes the stage layouts rather unclear at first glance. Sometimes, the game switches perspective entirely and has players viewing NiGHTS from behind or up above, forcing them to adapt quickly to the resulting changes in controls and handling. Since the camera is relatively close to NiGHTS, players can easily get blindsided by enemy attacks coming from offscreen, which take precious seconds off the timer. On top of all this, players will likely receive a low ranking when they initially complete each section, which may leave them unsure of how to do better next time.

On repeat playthroughs, players will inevitably grow to understand the stage layouts better and overcome most of these initial hurdles. More importantly, though, NiGHTS into Dreams’ score attack focus becomes more clear as players accustom themselves to the mechanics, and this is where the game is at its best. While bringing all 20 chips and breaking open the cage does allow players to progress to the next section, it also activates “bonus time,” a state in which all point values become doubled. In addition, once players pass over the starting position, all rings and previously collected items will respawn. These design quirks encourage players to make multiple laps around the stage to build combo links and score as many points as possible while making sure to reach the starting position before the timer runs out.

This turns what is otherwise a fairly laid-back campaign into a thrilling experience filled with precise aerial maneuvers and split-second decision-making. Collecting multiple items in quick succession to build up combos requires fast reflexes and a deep understanding of NiGHTS’ controls and momentum, and mastering those controls along with the level layouts results in a spectacular display of NiGHTS effortlessly weaving through the skies at high speeds. Choosing whether to risk running out of time to go through one more lap or to play it safe and head to the starting position early is a fascinatingly difficult decision that can lead to an immeasurable degree of satisfaction if it pays off. And while the process of going through multiple laps inherently involves a lot of repetition, it ultimately benefits the game, especially considering dedicated players will be repeating stages to perfect their high scores anyway. As players make their laps, they will slowly become more proficient at precisely navigating the stage layouts, and getting to see that skill growth in real-time is one of the most rewarding experiences out there.

Of course, it helps that NiGHTS themselves are so satisfying to control. Although the 2D plane does restrict where NiGHTS can fly within the 3D landscapes, it has a clear benefit in that it allows NiGHTS‘ movements to closely match those of the analog stick, resulting in a sense of fluidity and precision that simply would not exist if players had access to full 3D movement. The paraloop, which lets players create a vortex that sucks in nearby items and defeats most enemies, seems intentionally designed to exploit how fun NiGHTS’ movement is, as players activate it by flying in a complete circle. In particular, the dash makes high-level play incredibly enjoyable, as not only does it increase NiGHTS‘ speed, but it also lets players maintain its momentum after deactivating it. Because of this, flying around as NiGHTS feels remarkably natural, and the controls create a sense of empowerment that wonderfully complements the game’s dream premise.

A Journey of Dreams

Speaking of its premise, this is another reason why NiGHTS into Dreams works so well. On a surface level, the concept of dreams lends itself well to creative and zany stage designs and aesthetics. Upside-down landscapes mark the ceiling boundaries of each stage, and the terrain is often extremely uneven and weirdly shaped. Floating balls of water, magnetized platforms, and bouncy terrain are just a few of the strange gimmicks NiGHTS will come across in each stage, and the enemy and boss designs are appropriately bizarre-looking.

But the ways in which NiGHTS into Dreams achieves its dream-like aesthetic go much deeper than that. Levels and bosses start with very little buildup or fanfare, and the game refrains from spelling out any of its rules or what players’ goals are. Multiple background elements, such as the car in Mystic Forest and the train in Frozen Bell, serve little purpose other than as fun props to observe and interact with. The game can also trigger a wide array of easter eggs depending on what time and date the console’s internal clock is set at. For instance, player character Claris dons a witch costume if players select the Mystic Forest level on any day of October except for Halloween, and players can control NiGHTS’ rival Reala in Spring Valley if the clock is set to April Fools’ Day. Many things just kind of happen in NiGHTS into Dreams, which is exactly how actual dreams tend to feel.

Another dream-like aspect of NiGHTS into Dreams is how the main child characters Claris and Elliot are implemented in-game. Upon starting each level, players have to control one of the two kids as they make their way to NiGHTS, after which they never have to control the kids again unless they mistakenly run out of time. Interestingly, however, players can opt to temporarily ignore NiGHTS and simply run around the level for a while. Since the kids have full 3D movement, they can access areas that NiGHTS normally cannot reach, but other than that, there is little practical reason for players to control the kids at all. The feature simply exists to let players mess around and soak in the bizarre dream worlds that Sonic Team created. The fact that the game allows players to do this at all is weirdly fascinating, but the main benefit to this feature is that it sells the idea that players are in a dream. Dreams often feel aimless and devoid of purpose, so letting players aimlessly wander in a strange space for no reason other than the pleasure of doing so is a subtle yet clever way of recreating that sensation.

Further contributing to this dream-like aesthetic is the A-life system. This refers to a system in which players can breed a species of cute creatures called Nightopians by hatching eggs that spawn throughout the level. The Nightopians have several unique behaviors they can perform, and their mood can change depending on the player’s actions. If players hatch eggs or defeat enemies, then the Nightopians will become happier, but if players harass or even kill Nightopians using paraloops, then their mood will worsen. Their mood actually affects each level’s background music, which will become more jovial if the Nightopians’ spirits are high or more mellow if they are not feeling well.

Once again, the A-life system serves little purpose within the game proper. The methods through which players raise the Nightopians do not affect the level designs in any way, and the system does not reward players with bonus content or bring them closer toward a 100% completion rating. Even with all of the system’s intricacies and secrets, the A-life system exists purely for the sake of it. The fact that the developers went through so much effort to put this system into the game only for it to have little to no extrinsic purpose speaks volumes on how committed they were to bring their vision of a dream world to life. Features like this give NiGHTS into Dreams a sense of mystique that few other games have matched, and the effect that these elements have on the experience is incredibly powerful regardless of their practicality.

Of course, the game is not devoid of issues by any means. The aforementioned camera issues can make the game more unfair than it needs to be, and the boss encounters are often unwieldy and unsatisfying. Ultimately, however, none of these issues take away from how impactful of an experience NiGHTS into Dreams is. It lets players live out their dreams as they escape the bounds of reality and soar through the skies with unparalleled grace, and it immerses players in a world seemingly free of logic and limitations. 25 years later, even with a sequel and a poorly-received spiritual successor, no game looks, sounds, or plays quite like NiGHTS into Dreams.