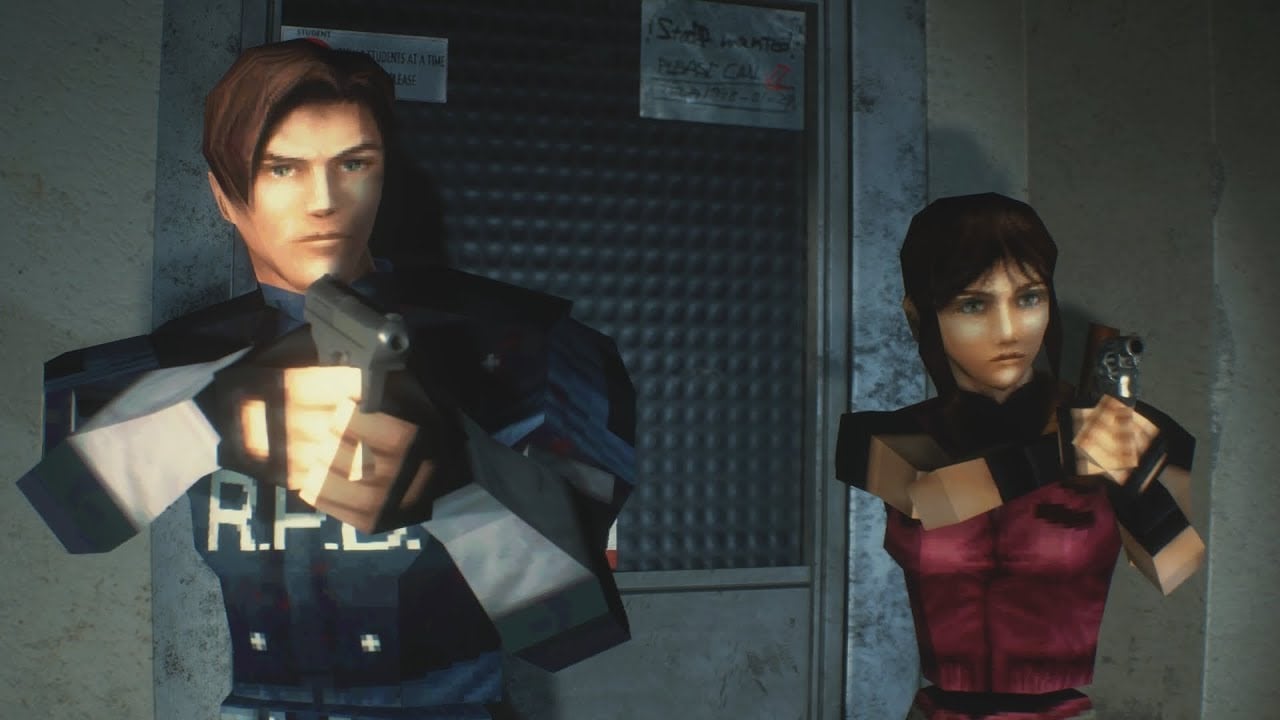 If you’re anything like me, you had a lot of problems in the late ’90s. Now don’t get me wrong, these aren’t real problems or anything, more like the qualms of a silly no-income child who wants to have the best of both worlds.

You see, I was the recipient of a Nintendo 64 back in those days. It was home to Super Mario 64, The Legend of Zelda: Ocarina of Time and a host of other classic games like Hybrid Heaven and Shadow Man. However, what this console did not have was literally everything else.

When my friends at school would go on and on about games like Metal Gear Solid, Final Fantasy VII, and Resident Evil, I was left in the dark. Sure I might catch snippets of gameplay here and there when I was at their houses, I might catch a bit of the story when an errant cut scene happened to load, but I was never really in the depths of this emerging new mature realm of gaming. I could only play in the shallows.

All of that changed when it was announced that Resident Evil 2 was coming to the N64. Finally, I too would get to play one of the big boy games! I too could have the thrill of three levels of aiming and stationary points of view. By the gods, what would I do with all of these pre-rendered backgrounds, conspicuously sparkling objects and amazingly complicated architectural designs?

I’ll tell you what I did: I played the shit out of this game. Seriously, all jokes aside, Resident Evil 2 is still among the best survival horror games I’ve ever played even today, 20 years after its original (PlayStation) release. The way it allowed for two separate campaigns, each with their own twin scenario to boot, made this game a truly unique experience at the time, even as the genre of survival horror was barely beginning to hatch from its shell.

I mean, if you asked most people if they’d ever played through the Tofu campaign, they’d probably say something like: “Who are you and what are you doing in my house?” If you asked me though, I’d be like: “Shit yeah I have! But seriously, where are you keeping my family?”

Now if the above blurb is leaving you a bit in the dark, and not in regard to the home invasion scenario, then I can help you out a bit. You see, N64 games cost $80-$100 in Canada, so when you got a new game you had to make that puppy last. None of the games I had for N64 had anything like the time-keepers that many games have employed since, and even at the time to a certain extent, but if they did, my parents might have thought about sending me to counseling they definitely couldn’t afford.

All of this to say that you had to do a whole lot of silly shit in Resident Evil 2 in order to unlock the mode where you could play as a giant piece of tofu that is inexplicably able to wield a knife. Furthermore, if you even played the “Hunk” or “Tofu” scenarios in this game, you either had a whole hell of a lot of time on your hands, or you didn’t have that many games to play.

As mentioned above, I was firmly in the latter party of players. Now (and may I not be struck down by the iron-fisted lords of Goomba Stomp for stating this) perhaps my parents chose wrongly by following the name of Nintendo into a 3rd generation instead of backing the scrappy newcomer, Sony, and their console for (sort of) grown-ups, the veritable PlayStation.

However, because they did, I got more out of Resident Evil 2 than most people get out of Final Fantasy. I must have watched the janky, block-filled, cartridge-based rendition of that ending cut scene a hundred times by the time folks were looking onto the horizon to welcome the GameCube into the world.

When it comes to games that can legitimately be beaten in just a couple of hours, even by non-speedrunners, Resident Evil 2 is only second to Super Metroid for games that I’ve spent far too much time playing my way through.

Indeed, the silly bastard who typed these words even went so far as to re-purchase RE2 on the GameCube, just a few years later. Hell, if this game were to emerge on Steam and PSN, I’d probably have bought it a couple more times by now. I might even platinum the old gal, providing that the trophy list wasn’t quite as obtuse as most Resident Evil games nowadays (I don’t think any of us has quite the never-ending load of time we had when we first played games like Resident Evil 2).

In any case, if you’re still reading this series of increasingly disconnected ramblings, then, like me, you’ve got a connection with this game that you just can’t shake, even after 20 years. And maybe, like me, you’re wondering how the G-virus mutated fabric of your being still connects you to those memories after all of this time. I frequently wonder the same thing when I think back to a game like this, one that had so much to do with my development, and my time spent as a youngster.

In the end, though, 32-year-old Mike can’t tell you why he loves Resident Evil 2 any better than 12-year-old Mike could, and maybe that’s why this game rocks so hard. Both versions of this writer knew that it was silly as shit to be fighting a giant zombie alligator in the sewers of Raccoon City, and both versions of this writer just smiled and had fun every time they blew up that damn cannister and took the thing’s head off.