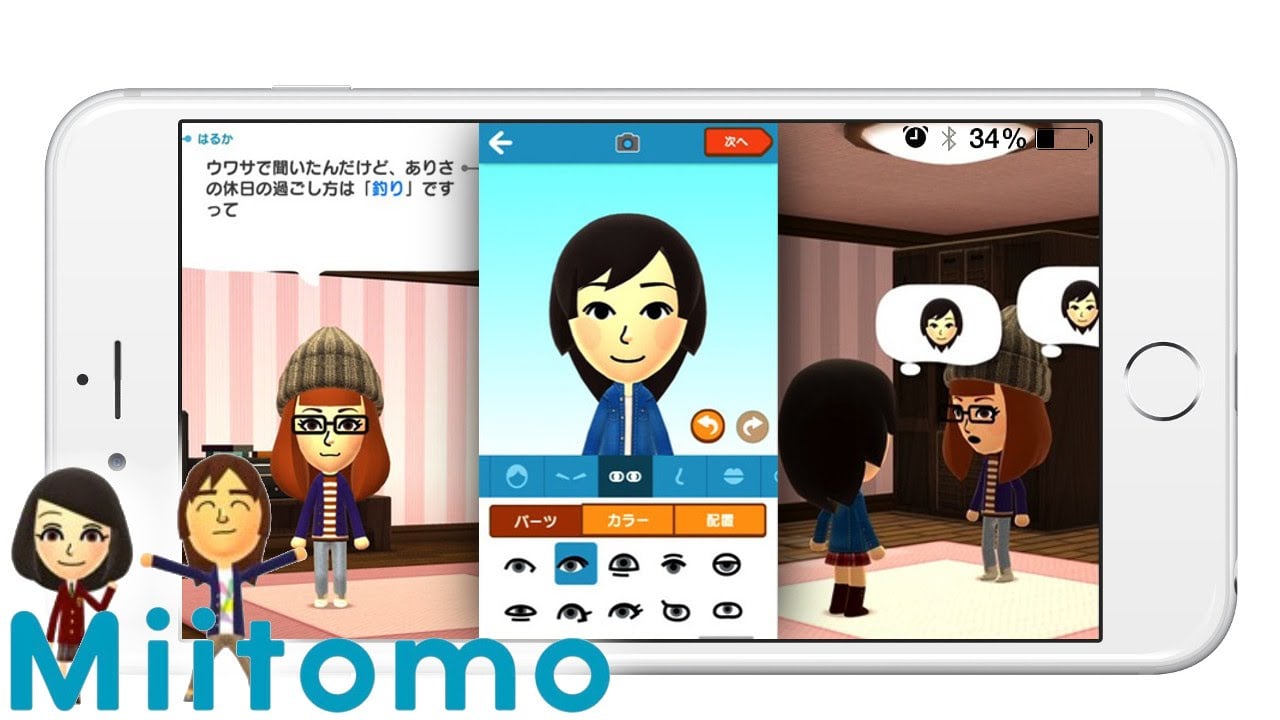 Preregistration opened today for both My Nintendo and Miitomo. My Nintendo is the predecessor to Club Nintendo and a unified account system across all Nintendo platforms. Miitomo, on the other hand, is Nintendo’s first mobile endeavor, which I could not be more excited for, despite the software appearing to be more of an app than a game.  Here’s why.

To begin, Nintendo clearly understands a thing or two about expression and creating a universally relatable and yet individually distinct experience. One of the reasons that Wii Sports is such a fondly remembered title is because not only was it generally approachable, but it made the experience remarkably individual by allowing players to play as avatars of themselves. Miis have been a remarkable hit from their inception, soon to be imitated by countless sources (*cough* Microsoft *cough,*) and for good reason. Wii Sports, Wii Play, Nintendoland, and the innumerable other titles and apps which feature Miis wouldn’t have been nearly as memorable without making it a personal experience by incorporating the player in to the on-screen happenings. With Miis once again taking the spotlight in Miitomo, players are offered a safe way to interact with other players that is guaranteed to feel more personal because it incorporates a small version of the user in to the experience. Nintendo also has a record of creating remarkably fun apps almost as enjoyable as their games. One need look no further than Miiverse to see an impeccable handling of a social app which is in many ways the backbone of the Wii U. Feel free to recall the apps shortcomings, such as slow load times and the often jarring removal from in game immersion, but then consider what Miiverse has accomplished and become for the Nintendo community. The Miiverse is stupendously integrated in to almost every title now, allowing players to easily share their thoughts and opinions about particular moments in game, or about a game in general, or about absolutely anything at all. It is a tool that countless players take advantage of to ask for help, commend fellow players, build hype, and even share art. Seeing a player’s Miiverse post above their Inkling in Splatoon immediately makes the world feel smaller and more connected. I immediately relate to and feel a connection with players who for no reason at all draw remarkable portraits of Goku from Dragon Ball Z in an irrelevant setting. Walk around Inkopolis in Splatoon during a Splatfest event to see innumerable players cheering for their side of the war through art, humor, and excessive enthusiasm. Marvel at how many players take the time to encourage and commend their peer stage designers in Super Mario Maker.

I still remember an early experience when the Wii U just came out and I completed the Donkey Kong-themed game on Nintendoland for the first time, a particular challenge I might add. Elated, I took to Miiverse to simply exclaim, “I did it!” or “I finally beat this!” or something along those lines. Almost immediately another player responded with a sincere congratulations. I can recall countless times laughing out loud as I found and shared ridiculous selfies in The Legend of Zelda: The Wind Waker HD. And how epic is it to see player generated content on the Miiverse stage in Super Smash Bros. for Wii U cheering on the character you’re using? Without a doubt, the Miiverse is the best social connection app amongst any console, a fun place to share and connect, get player reviews, celebrate victories, and celebrate a community that actually enjoys playing together. Sure, socially speaking the Wii U has limitations, but, ironically, I am one hundred percent more likely to share on Miiverse than anywhere else in the gaming community, and I’m far from alone there. That’s just one app! Consider the all-too-short-lived Swapnote. In case you don’t know, Swapnote was a 3DS app that allowed players to draw and write on up to three panels complete with Nintendo-themed backgrounds. Those notes could then be sent to friends online or shared with the world through Spotpass (the 3DS wireless hotspot mail system, so to speak). While the app was taken down as a result of disgusting users breaching the conduct agreement and abusing it to over-share with younger users (an unfortunate turn of events that should be simultaneously be blamed on negligent parental overview), the app was incredibly fun amongst friends while it lasted. To me and my friends it was a tool to create hilarious one to three panel comics often featuring the Nintendo characters in the backgrounds. While Flip Note 3D and many of the safer followups never appealed nearly as much to me and my friends, Swapnote provides another example of a great social app developed by Nintendo. Or, take in to account Streetpass, the 3DS’s ingenious feature that turns perfect strangers in to allies and friends, and a feature that makes the 3DS a fun console even without a game. While Streetpass does border on being a game (actually multiple games) over an app, the goal is much the same as Miitomo‘s seems to be, entertainment and amusement connecting with other players utilizing Miis. Its necessary to note that perhaps what makes all of these apps and features so remarkable are not only the brilliant designers and programers behind them, but the community that utilizes all of them. There truly is no gaming community like Nintendo’s. Welcoming, friendly, creative, and sociable, the community that Nintendo now fosters is one that I am continually proud and happy to be a part of. At the very least, in my experience, it’s the most secure gaming community, and the least prone to participate in the banal bantering of the “fanboy” battle. Opening that community up to all smart-device users is a thrilling prospect, an opportunity that I hope many Nintendo outsiders or estranged fans will hop on. Plus, presumably working in conjunction with My Nintendo, Miitomo will allow for more interconnection than ever before across countless devices, consoles, sites and apps. Sure, many people have wanted legitimate Nintendo games and properties on their mobile devices for years now, particularly those that don’t own either of Nintendo’s current consoles. But before all of that begins, perhaps a more generous gesture from Nintendo and its followers is a simple invitation, an invitation to see why millions still love Nintendo, to see why thousands upon thousands bother to use Miiverse, to see part of what set the 3DS apart from the PS Vita. If Miitomo is anything like Miiverse, Streetpass, or any of Nintendo’s apps, it will be a noteworthy addition to your mobile’s home screen. Personally, I can’t wait, and I hope you reader don’t miiss out on the fun.  Nintendo fans, preregister for My Nintendo here.  To everyone, if you missed the link above, preregister for Miitomo here.