Wandersong is unlike anything I’ve ever played before. In a gaming landscape where violence and drab color pallets are the norm, Wandersong goes all-out with a colorful presentation and pacifist main character. At a time when it seems like every game is trying to hold your interest with collectibles, leaderboards or side objectives, Wandersong offers a low-stress, happy-go-lucky experience instead. What results is an utterly delightful musical adventure that serves as a much-appreciated breath of fresh air. 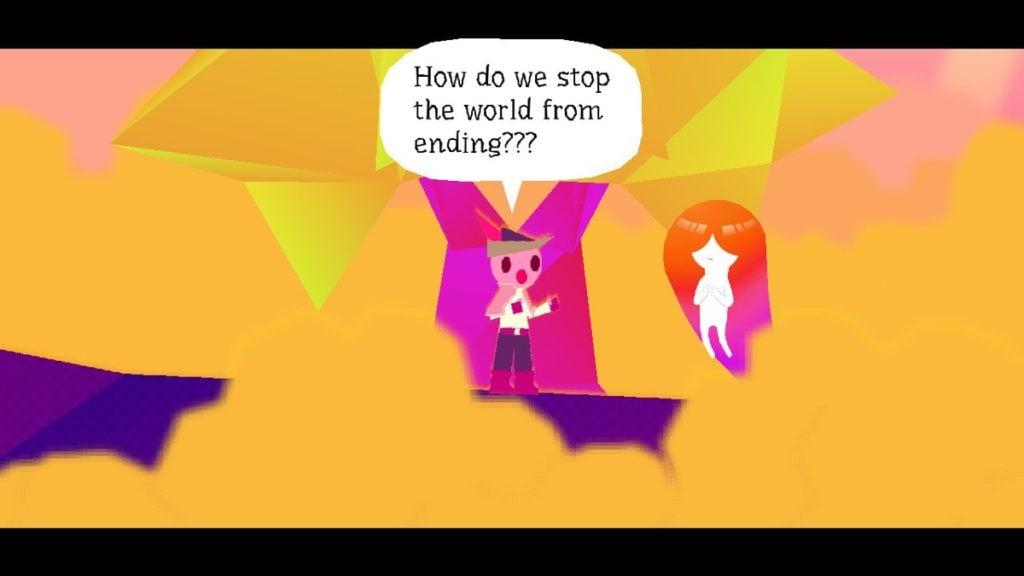 An Unlikely (Yet Lovable) Hero

Players take on the role of a lovable, silly little bard who just so happens to learn about the universe’s impending destruction. Determined to save the world and everyone in it, the bard embarks on a quest to learn all the pieces of the Earthsong, the elusive melody that can keep the universe from being reset.

Though the core narrative concept is fairly cookie-cutter, it isn’t until several hours into the tale that players discover that it’s by design. What results is a story that, while never particularly overbearing or intricate, provides enough nuance to keep things interesting. There are shocking tonal twists that you’ll never see coming and a bit of character development that you might not expect. All of these are well worth experiencing firsthand, but know going in that Wandersong is anything but one-note in narrative design. 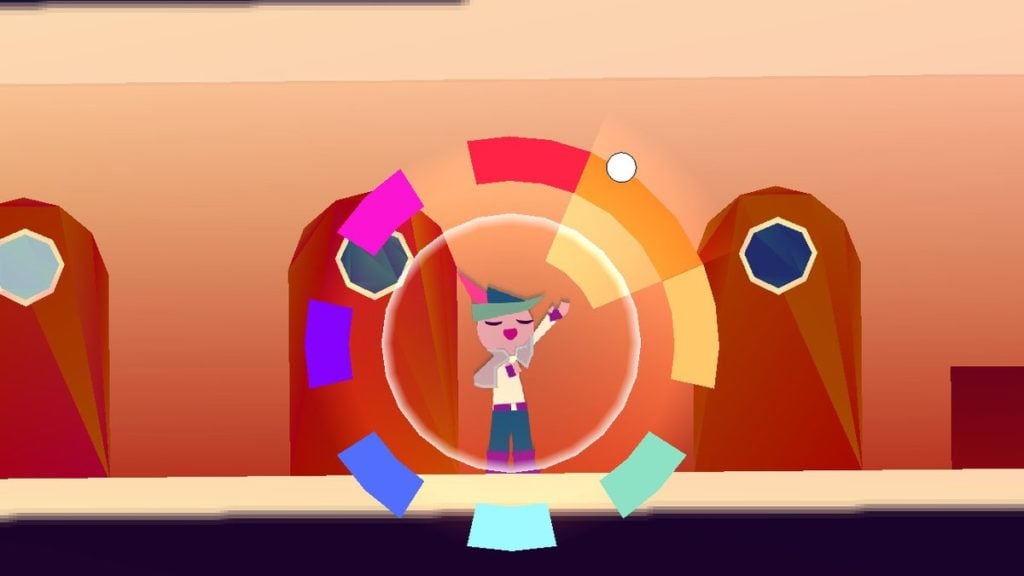 The Power of Song

Wandersong’s core gameplay concept of being able to sing anytime, anywhere is a bit reminiscent of the “play golf anywhere” philosophy of 2017’s Golf Story. No matter what the situation–while running around aimlessly, during dialogue, or in the middle of a cutscene–players can sing by using the right stick to highlight one of eight different-colored notes.

These eight notes become the player’s tools for solving every puzzle, defeating every baddie and impressing (or annoying) tons of NPC’s along the way. There’s a lot of creativity here; using song to both lead a pirate crew in a sea shanty and direct the course of their ship is one of my fondest gaming memories this year, and that’s just the tip of the iceberg. Music challenges come in the form of hitting certain notes in time with a rhythm and mimicking notes displayed by friends and enemies alike. Wandersong also dabbles in using the positions of notes and the speed by which you interact with them to control certain elements in fun and intuitive ways. Discovering all the creative uses of the song wheel littered throughout the experience was consistently a highlight.

It’s an interesting and novel gameplay hook, and when it shines it shines brilliantly. However, one of the game’s defining characteristics can also be seen as a negative. Wandersong is, by nature, a very easygoing game. There are no lives and no restarts, and if a player happens to miss a jump, they’re quickly transported back to the closest surface. Similarly, there’s very little concern about losing when it comes to the puzzles and battles involving singing. They’re set up quite well and almost always feel exciting, but they’re never really too difficult. This didn’t particularly bother me during my playthrough, but I can certainly see other players being let down by the noticeable lack of challenge here. 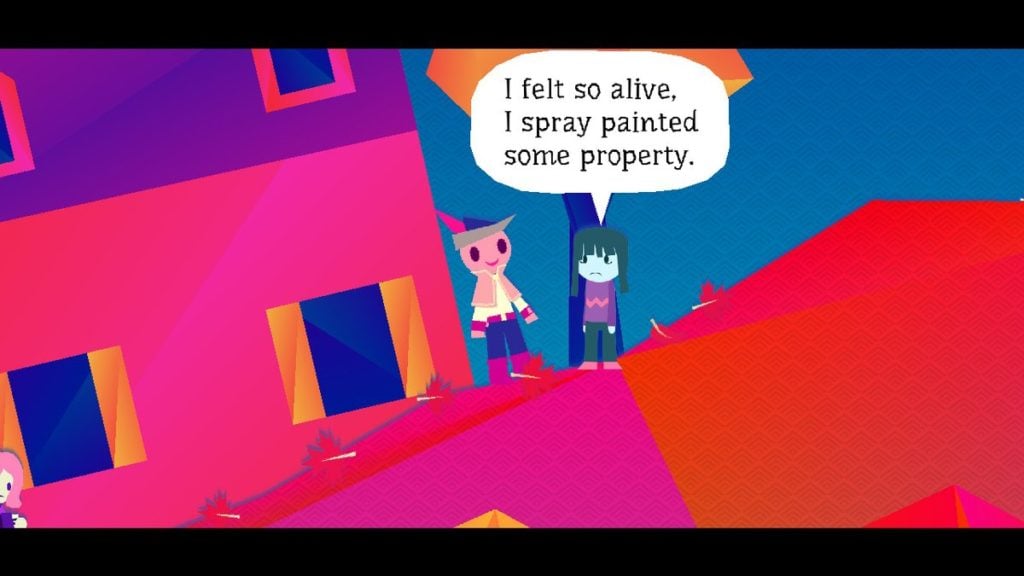 Wandersong’s art style is quite unique. Its construction paper aesthetic is charming and cartoonish, but also limiting in the amount of detail it can convey. That said, the style lends itself well to the game’s overall tone. There are even a few scenes where Wandersong’s dazzling array of colors and some smart lighting effects come together to create some truly memorable moments. It’s a great testament to art style and color palette being just as important as a game’s sheer graphical fidelity.

Of course, what would a game called Wandersong be without a quality soundtrack and voice work? Luckily, both manage to do a dutiful job of keeping playing invested, relaxed and, at moments, seriously tense. The tunes aren’t particularly catchy or memorable on their own (aside from the sea shanty), but they’re also far from offensive. The singing vocals attributed to the bard are crisp in quality and well-sung, as are the singing voices of NPCs throughout the game. Though any non-singing voice work is generally comprised of grunts and indistinct character noises, the bit of effort was always appreciated as part of bringing the game world to life.

Designing a 2D world that feels alive and greatly varied is no easy task, but that’s just Wandersong manages to do. The writing here overall is sharp and self-aware, and there’s a ton of it. Having a non-silent protagonist is a bit of a gamble, but developer Greg Labanov did a stand-up job with making the wonderfully naive bard feel realistic and relatable. Every major character has a distinct yet nuanced personality, and every NPC has their own unique bit of backstory that worth a read. 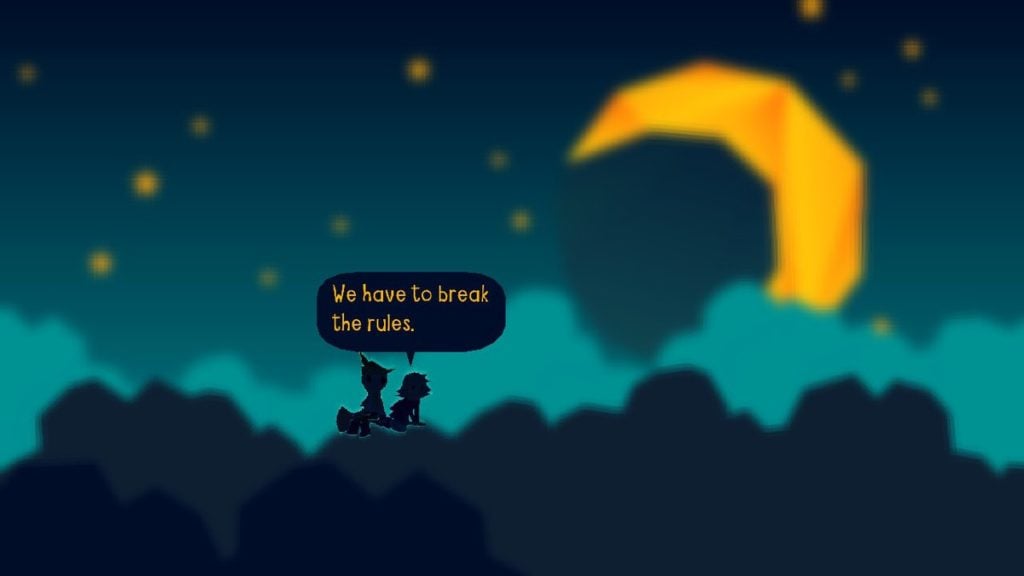 Adventure in Every Sense of the Word

So many sidescrollers struggle with conveying a true sense of adventure. While backdrops and enemies can be swapped out easily enough, it’s always been easier for 3D games to make players feel like they’re actually traveling to different areas of a game world or universe. Wandersong, however, absolutely crushes it.

The key to Wandersong’s strong sense of progression through different environments is its wonderfully implemented travel sequences. Instead of simply teleporting to a new space or walking endlessly to the right or left until the scenery changes, Wandersong’s linearity ends up working in its favor. The aforementioned sailing sequences weren’t only an effective way to illustrate travel, but they also made for one of the most fun gaming memories I’ve had this year. Meanwhile, some of the best scenes in the game have the bard and Miriam flying through the sky to new locales on Miriam’s broom. Whether the player is directly controlling the method of travel or not, all of this culminates in a completely natural and fulfilling travel experience that really sells their journey around the world.

Wandersong is an all-around delightful little experience. It’s an experimental, whimsical, and quite poignant little adventure that manages to carve out a nice space for itself on the strength of its art style and inventive mechanics alone. It’s a gamer’s game in many respects: incredibly frequent auto-saving, fast and generous respawns, a smart dialogue system that makes it easy for players who want extra lore to get it without NPCs endlessly repeating the same phrase, etc. Those looking for any real challenge certainly won’t find it here, and those craving a top-notch presentation are also likely to be disappointed. In terms of a low-stress adventure with genuinely thought-provoking moments illustrated by a beautiful color palette, though, Wandersong is easily worth recommending.