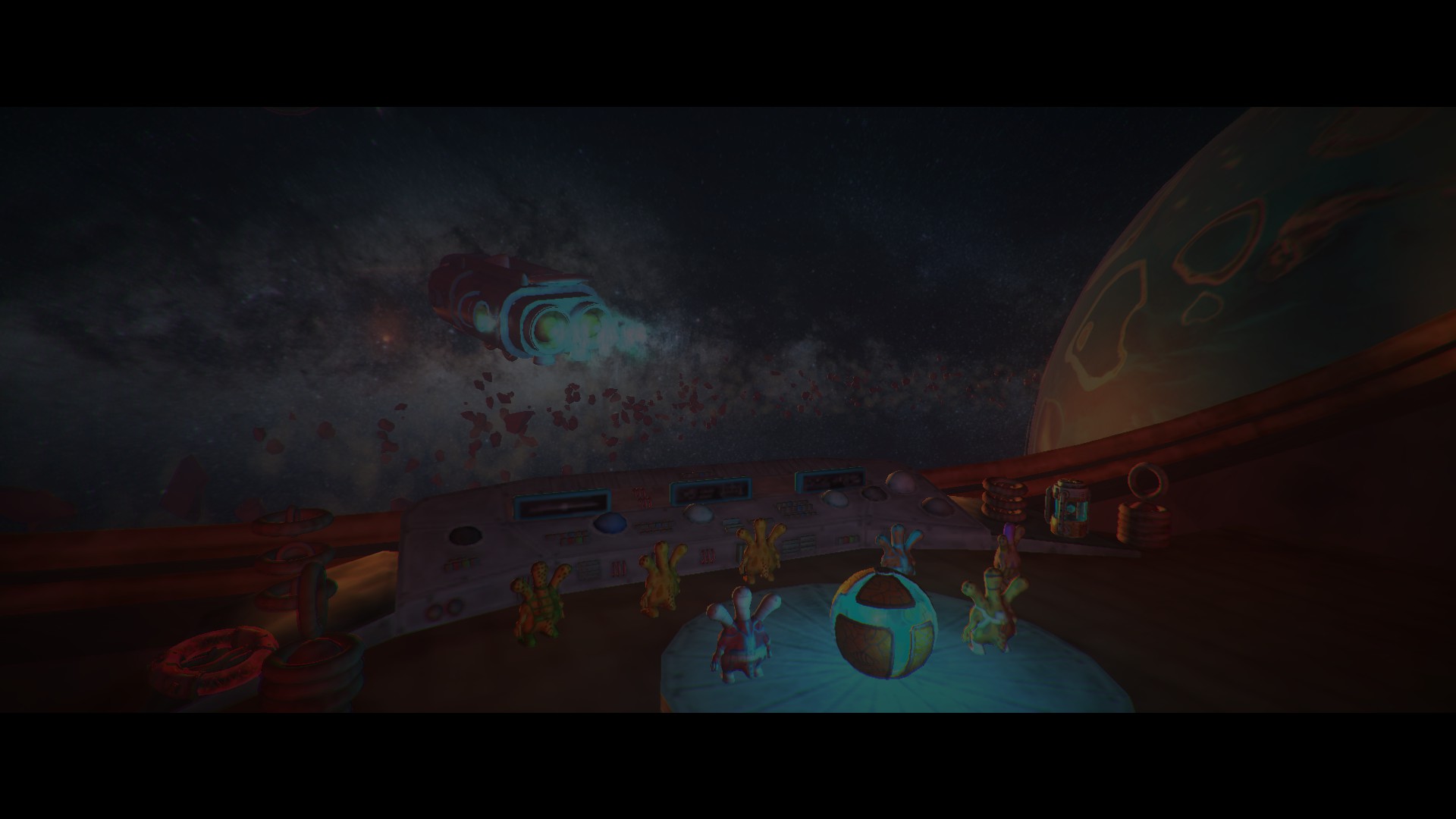 We don’t tend to see a lot of god-games anymore, do we? Sure, we have city planning games like Cities: Skylines and Sim City, and The Sims offers you the ability to mess around with virtual people, but actual god-games, where you take on the role of an omnipresent overlord, are few and far between. It’s this rarity of the genre that makes The Mims Beginning stand out that much more; but is it enough to elevate it to the classics like Black and White or Populous? Or is this just another false god in the pantheon?

The setup of Mims is that the titular creatures, which resemble three fingered hands with two eyes on each finger, are stranded in the cosmos and need to find the various pieces of their starship in order to re-create their destroyed empire. You are a benevolent being that’s given command of the Mims in order to aid them in their task. The plot rarely deviates from this, however there are cut-scenes at the beginning of each level that tell you where you are, what you need to do, and offer humorous insights into the Mims’ culture. While the English translation is less then stellar, that actually tends to add to the charm of these scenes, and there’s a lot of humor, both intentional and otherwise, that gives Mims a great deal of character.

Don’t let that fool you into false sense of security, though, as this is a really challenging game. You have two resources. The first is bio-material, which is collected by tossing fruits into a giant blender building. More important are crystals, which are collected either by sending off a trading ship to sell animals or gathered from rare deposits around the island. Making sure you budget your crystals is probably the single most important aspect of this game. If you run out of crystals before establishing a trade system, you must restart the level. 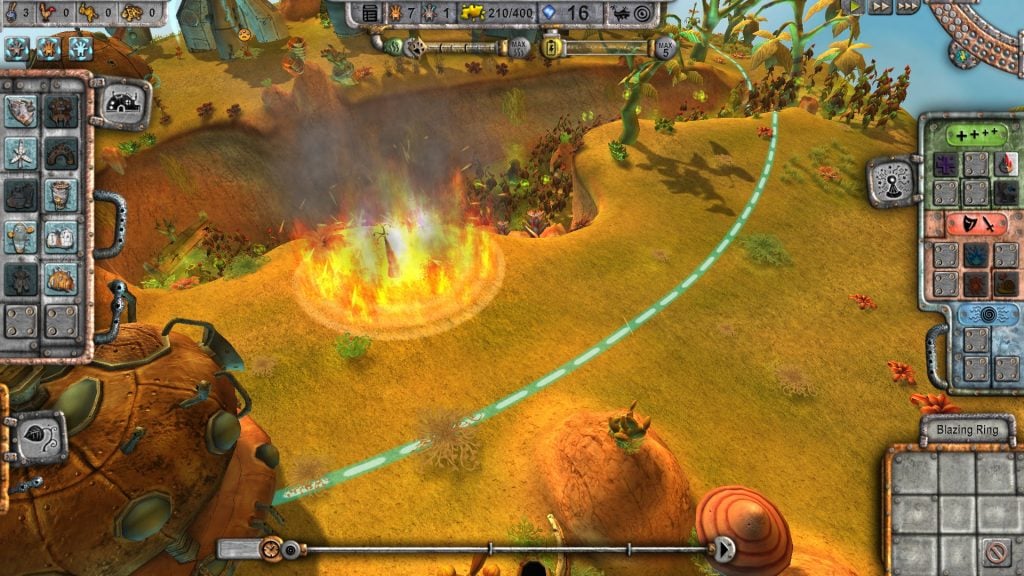 Like any good god-game, you can destroy as much as you create.

That’s not a complaint against the game, since plenty of games have necessary actions, but what is a complaint is the inability to save mid-mission. Missions can take a really long time, especially when the difficulty starts to ramp up and concepts like combat are introduced. It’s easy to get stuck half-way through a mission and find out that you need to restart the whole thing, losing a lot of time and potentially patience with the game.

Gameplay is, thankfully, simple to learn. You only have a little bit of direct control over the Mims, and instead hand out orders, mostly just to build new buildings or upgrade existing ones. Other than that the Mims are completely autonomous, going about collecting resources and resting when necessary. Your only other interaction with the world is through the use of Psi powers, replenished by having Mims devote time at your town hall. Psi powers range from granting health or speed bonuses to Mims, to throwing fire and sending out blasts of energy to damage enemies and clear the landscape. In many ways it’s reminiscent of the god powers of Black and White, and using it to affect the world gives you a great sense of power.

Graphically, the game wisely leans more towards style then substance. Simply put, Mims Beginning isn’t a good-looking game, but it is a nice-looking game. It’s very reminiscent of early 3D games, and looks like it came straight out of 2004-2006. There’s a lot of great art direction though, and everything is unique and cool to look at. The Mims themselves have a lot of character and the different classes each look distinct and interesting, as do the various buildings you place. But the real star is the levels, with each campaign map looking completely unique from the others, with a lot of visual flare scattered around, occasionally hiding secretes if you click the right triggers. 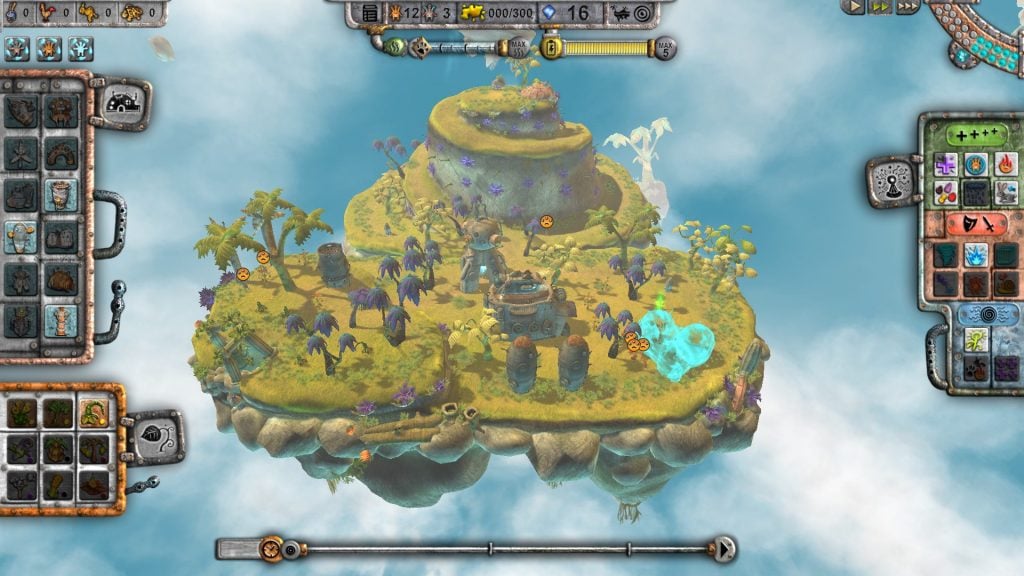 Islands are a lot smaller than they look, so proper building placement is important.

On the audio side, the game is spartan at best. There’s a bit of music, but it’s mostly just generic sci-fi fantasy stuff you’d hear in any kid’s adventure TV show or game. What few sound effects there are sound okay, but there’s really nothing worth talking about. There is some credit to be given out concerning the Mims’ voices, which sound alien and weird, but the repeating clips get boring after a while.

The Mims Beginning is a type of game we just don’t tend to see as often as we probably wish we did. As a love letter to old god-games like Black and White it’s a near perfect imitation, and for fans of the genre absolutely starved for new titles, this is a must. It does suffer from a few issues, like no saving mid-mission and really dated visuals even at the max settings, but these tend to fall by the wayside, along with the hours, as you spend time helping the Mims in their quest for glory.