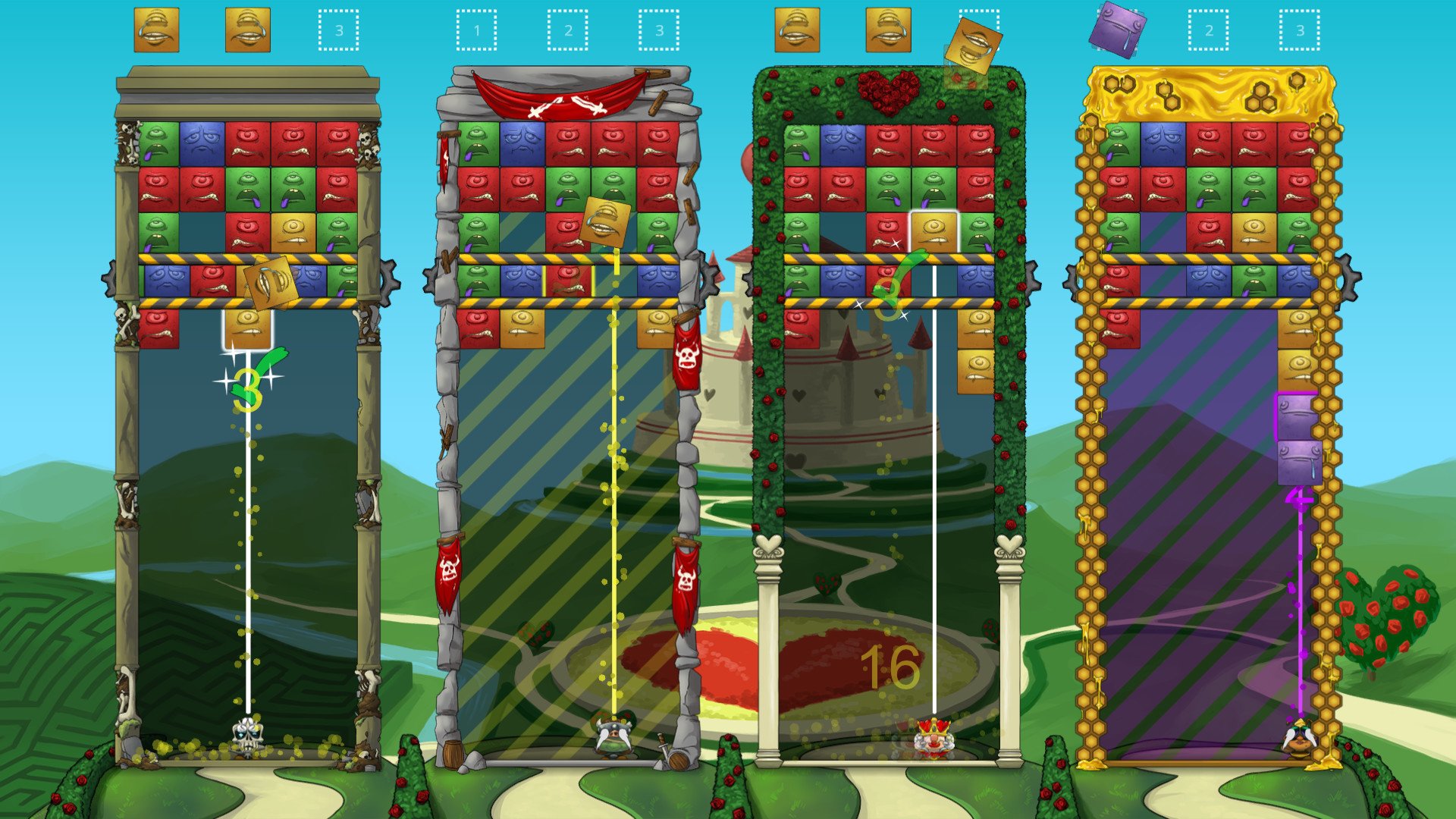 The “Match-3” genre is a tired one. Each game appears to be the same rule set and controls with a new skin to make it seem original. The once addictive gameplay from the likes of Bejeweled and Candy Crush Saga has become mundane in 2016. Innovation seemed to be impossible with such a simple gameplay mechanic forming the base of the genre, meaning that gamers looking for an addictive action-puzzle game would need to stick to Tetris. This generation of gaming platforms seemed to have no place for a genre that was more suited to a cell phone.

Ty Taylor and the rest of the Quantum Astrophysicists Guild have created innovation within an age-old formula. Tumblestone is a testament to the creativity of indie developers and stands as the best action puzzle game released in years.

The premise of Tumblestone is simple: match three like-colored blocks (also called tumblestones) to clear them from the board until all the blocks are gone. However, the player can only select blocks from the bottom row of each column. Once selected, the block is removed from the board and is placed at the top of the screen until two more like-colored blocks are selected. Once that happens, it is considered “cleared” and the player can start clearing a different set of blocks. This small change to the formula makes for some devious puzzles, as it is very easy to get stuck in a situation that leads to no solution. If that happens, then it’s time to reset the board and start again. It really is a genius formula that works for both single and multiplayer modes. 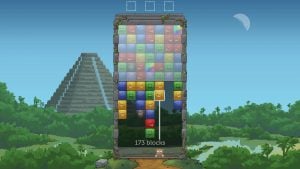 Getting a little close there…

Single player is broken up into two categories: arcade mode and story mode. The story mode follows the journey of several goofy characters as they try to rid the world of the tumblestones that are blocking everyone’s path. It’s silly and doesn’t take itself too seriously, which works for this type of game. However, the mode is absolutely jam-packed with content. There are hundreds of stages separated into 11 different worlds, with some players taking up to 40 hours to complete it. Every world shakes up the standard formula introduced in the first world by adding certain obstacles such as conveyor belts that move each time a block is selected or rocks that won’t move until each block in its row is cleared. These create interesting yet brutally difficult scenarios that will challenge even the most seasoned puzzle fanatic. Boss fights that play similarly to the multiplayer mode end each world, with the player’s newly developed skills being put to the test against the AI.

Arcade mode takes popular game modes found in other puzzle games and applies it to Tumblestone’s unique gameplay. Marathon mode has the player clearing blocks in order to rack up as many points as possible. Mistakes close the gap between the blocks and the player. Once the blocks touch the bottom of the board, it’s game over. Heartbeat mode is similar to marathon, except the blocks are constantly moving toward the player. This mode is extremely fast-paced and ends up exhausting the player’s reflexes as much their brain. Infinipuzzle allows all of the modifiers from each of the single player worlds to be turned on or off, making for some interesting puzzle combinations. All three of these modes are a blast, with the standout being infinipuzzle simply because of the number of modifiers the player can experiment with.

While the single player campaign is both addictive and packed with content, the multiplayer is really what makes this game special. Up to 4 players (online or local) can go head-to-head in a race to see who can clear their board the fastest. It sounds simple on paper, and it is, but the end result serves as one of the best local multiplayer experiences this year. The speedy gameplay becomes extremely addictive, especially when the room is filled with jeering gamers. The game’s simplicity opens the door to people of all skill levels, yet mastering the game will take hours and hours of practice. 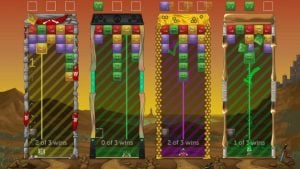 The competition certainly gets high. Friendships are bound to be broken.

Tumblestone’s presentation is its weakest area. The visuals work well enough for a puzzle game and the characters that appear in cutscenes between some of the story mode stages are delightfully goofy, but the music during gameplay ends up merely being adequate. None of the tracks are particularly catchy, and while the music certainly isn’t terrible, it would have been nice to see some more fast-paced songs and beats to keep up with the crazy tempo that Tumblestone creates with its gameplay.

Tumblestone is without a doubt the best puzzle game released this year and deserves to stand with the best of the bunch in the action-puzzle genre. A robust single player campaign complements the fiendishly addictive arcade modes to create a varied single player experience that will leave very few players bored. Pulse-pounding multiplayer matches round out the package to deliver an amazing value that many other puzzle games cannot match. This is an excellent title that should not be missed in 2016, as it’s bound to be played for years to come.