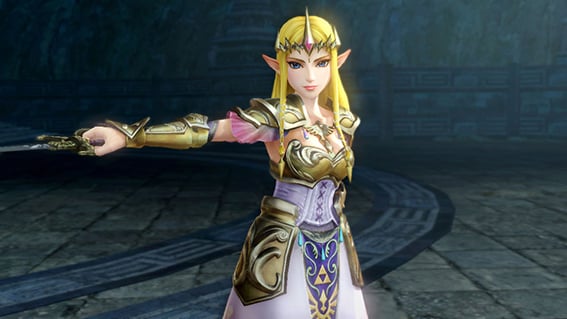 No other warrior in The Legend of Zelda series has been the recipient of so much burden, torment, and anguish than that of the titular princess herself. But even in the face of impending annihilation, Zelda remains steadfast and courageous on behalf of her kingdom. While Link goes down in history as the savior of Hyrule, without Zelda’s aid the world would have fallen into darkness on countless occasions. Hyrule remains prosperous and peaceful in the face of evil and it’s due to their princess’ wisdom, martyrdom and willingness to take up arms.

When tragedy strikes the kingdom of Hyrule and the hero is called upon to save it, he is expected to be completely knowledgeable of the goings-on of the kingdom, the in-and-outs of swordplay as well as be in tuned with his communion to the three Goddesses above. Unfortunately, this is seldom the case. Link, while strong and brimming with courage, is just as naive of the world as we are when beginning the adventure. There is one person with enough knowledge of the kingdom to aid the hero in his time of need. Throughout Ocarina of Time, Zelda, disguised as the Shiekah tribesman, Shiek, accompanies Link in the shadows, making sure his journey goes according to plan. Zelda knows the lay of the land and sends him in the right direction when it seems that the Hero of Time comes to an impasse, whether it be by teaching him new songs to access temples or telling him of a hidden lens that helps him see through walls.

Zelda’s knowledge of the Triforce and its power is far greater than anyone else in Hyrule. By splitting up her own Triforce of Wisdom into eight pieces and scattering them throughout the kingdom, she prevented Ganon from taking total control of the Triforce and ruling the world during the events of The Legend of Zelda. Knowing the importance of the Triforce as well as the power it holds has done so much in preventing Ganon from unleashing an age of darkness upon Hyrule. Princess Zelda’s wisdom is an invaluable asset to the hero’s arsenal and one the world couldn’t have survived without. Of course, Zelda isn’t afraid to risk her life for her world. By splitting her Triforce into eight pieces, she knew she would incur the wrath of Ganon, and accepted that she would be imprisoned within Death Mountain for her crimes. As a descendant of the Goddess Hylia, the princess gives no second thought about sacrificing herself for the greater good. She encased herself in crystal during the events of Skyward Sword just to guarantee that Ghirahim would not use her soul to revive the Demon King Demise from resurrecting before Link can obtain the Triforce.  When the lives of her own people are threatened, she would unblinkingly put herself in harms way.

Zelda won’t always find herself in such a passive position, however. When the need is high, she will take up sword and shield and fight alongside Link. In Spirit Tracks, Zelda can possess knight armor and use their strength and sword skills to their own advantage in both puzzle solving and battle. Let’s not forget how, with the use of her bow and sacred light arrows, she stood up against Ganondorf himself as to allow Link to hit the final blow and seal the Gerudo king under the Great Sea during the events of the Wind Waker. Whether it be in a defensive or offensive position, Zelda lives up to her bloodline and the spirit of the Goddess Hylia within her by defending the lands that have brought her and her family so much prosperity. Zelda might have started out as a damsel in distress in the early days of video game story-telling, but as the series progressed, the beloved princess became a much more dynamic character, providing the backbone of the series itself. Knowledge, sacrifice, and bravery; the three elements that make Princess Zelda such a multi-dimensional character who isn’t just a tool to progress the story also define the game series as a whole. Zelda is the franchise’s namesake and rightfully so. When the next Legend of Zelda releases, take note of how well Princess Zelda is utilized and how the world of Hyrule would be devastated without her leadership.