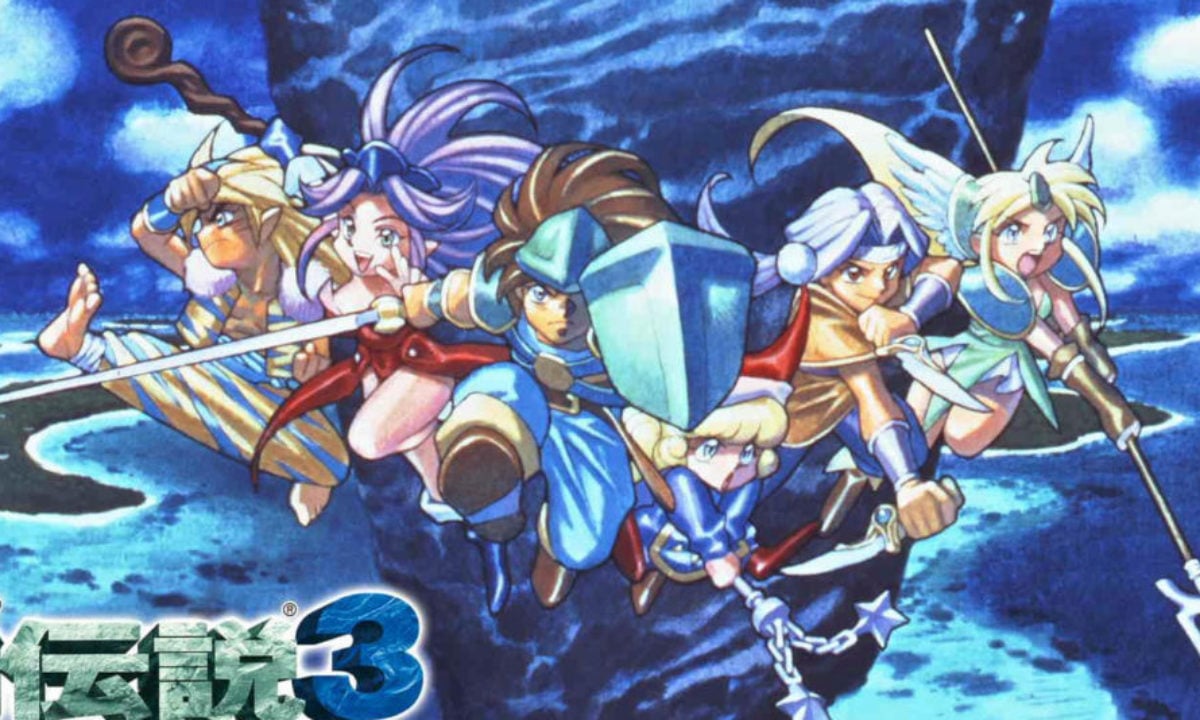 Considered one of the greatest video games of all time, Secret of Mana is the second entry in the Seiken Densetsu franchise but the first to really solidify the series’ core identity. Final Fantasy Adventure is the franchise’s progenitor, but Secret of Mana is the game that sets the foundation. As a result, it’s home to many qualities typical of a freshman endeavor. The combat isn’t all that refined, there’s a clear imbalance in terms of difficulty, and the title is sorely lacking in quality of life features. As great an RPG as it is, Secret of Mana was always a game that would have benefited from a direct sequel. Unfortunately, said sequel was landlocked in Japan for 24 years.

Originally released in 1994, Seiken Densetsu 3 started gaining western attention in the late 90s, prompting a translation effort by Neil Corlett that would ultimately release in August of 2000. One of the more complex RPGs on the Super Famicom, it didn’t take particularly long for Seiken Densetsu 3’s online presence to skyrocket. With six playable characters, three distinct story arcs, a surprisingly non-linear campaign, and plenty of customization options, the RPG was almost destined to become a classic, cult or otherwise. Fast forward to 2019, and Seiken Densetsu 3 has finally received its first official English translation with Square Enix localizing the title as Trials of Mana.

As incredible as it is that an action RPG from 1995 that released exclusively in Japan suddenly got an official translation 24 years after the fact, this lull in time does unfortunately mean that Trials’ clear improvements over Secret of Mana won’t necessarily be obvious to a modern audience. Secret of Mana is not a game that’s particularly fresh in the mainstream’s lexicon, perhaps even less so thanks to its panned 2018 remake. A shame considering Trials of Mana might very well be the single greatest sequel on the Super Nintendo.

More specifically, it’s the best sequel of a Super Nintendo game to release on the SNES. Trials of Mana is as direct as a sequel gets, building off narrative, thematic, and gameplay elements in a logical way. It can be argued that Secret of Mana did the same when following up Final Fantasy Adventure, but the differences between both RPGs are frankly quite high. Trials of Mana is reminiscent enough of its predecessor where fans nicknamed the game Secret of Mana 2 for years; and although it may not seem it, that is a term of endearment.

Trials of Mana is the kind of sequel that looks back on its predecessor in order to pinpoint what exactly can be improved. It’s almost comical the length the game goes in order to outright one-up Secret of Mana. Secret had three playable characters? Trials has six and, not just that, each character has their own arc while getting to be the hero of their own story. Secret had an addictive if a bit tedious leveling system? Trials gets rid of weapon and spell leveling, instead allowing party members to pick their own stats every level up. Secret had an overworld that only grew in scope? Trials lets players progress most of the game in whatever order they choose.

The party system alone gave the game a layer of depth that many of its contemporaries lacked. It also directly addresses one of Secret of Mana’s most glaring flaws. For as charming as the adventure is, the main trio ends up poorly characterized. Randi is a flat character until the very end; Primm’s character moments are way too scattered; and Popoi’s arc implies a level of emotional attachment that the story never successfully earns.

On the flip side, all six playable characters in Trials of Mana have clear motivations, consistently interact or influence the plot, and end up completing their character arcs. Some arcs are better than others— Hawkeye and Riesz are far and away the most interesting party members— but the fact that not a single character comes off as undeveloped as Randi is a huge plus. More importantly, characters actually play differently this time around.

In Secret of Mana, all three characters played the same. The only key differences came from which weapons a character was using along with the fact that Primm primarily used supportive magic whereas Popoi used offensive magic. This time around, all playable characters have clear gameplay purposes.

Duran is the standard swordsman, a heavy hitter who mainly uses magic to augment his weapons; Angela is a magician who can dish out an impressive amount of damage thanks to her offensive magic; Hawkeye is an agile ninja who hits fast and, more importantly, hits twice; Riesz is an incredibly balanced amazon who can fit just about any gameplay role; Charlotte is a cleric who can reliably serve as the party’s dedicated healer; and Kevin is a half-human, half-beastman warrior who hits incredibly hard while also hitting twice per attack.

The way attacking works is worth discussing in and of itself. Instead of reusing Secret of Mana’s stamina meter, Trials of Mana only requires that party members trigger a brief cool down animation before attacking again. This allows characters like Hawkeye and Kevin to shine since they can attack twice before cooling down, but it also removes most of the action’s tedium while also keeping battles tactically engaging. The stamina meter was undeniably a good design decision for Secret of Mana, but Trials of Mana’s faster and more involved gameplay necessitated a system that would allow the pace of its combat to adequately shine.

In terms of progression, while the absence of Secret of Mana’s leveling system does lead to less moments of character progress overall, the stat select system is genuinely the better form of customization. Not only is the concept rooted in Final Fantasy Adventure, it allows for far more individual character variety. Each character can level up their Strength, Dexterity, Stamina, Intelligence, Spirit, or Luck per level. Unlike FFA, selecting a stat does not influence others, simply increasing that singular stat. As a result, stat caps are far lower than most RPGs, but each stat ends up having more weight as a result.

More importantly, the stat system ends up playing off of the class system. The six playable characters are not static the way Randi, Primm, and Popoi are. Upon reaching level 18, characters can switch to their second class. Once they reach level 38, they’ll be able to switch to their third class so long as they have a rare item needed for class changing. That said, character classes aren’t static and each party member has a total of five classes including their default class.

When class changing for the first time, characters will be able to switch to a Light or Dark class. Light classes typically offer better spells whereas Dark classes end up being more offensively viable. This isn’t set in stone, however, and character classes vary from character to character. Upon switching to the second class, though, said class will be able to branch off even further as the second class change features its own branching classes as well, also symbolizing Light and Dark. Coupled with the party system and the leveling system, classes add even more variety to an already heavily customizable game.

This ends up being a godsend all things considered due to just how replayable the game is. Trials of Mana is built for multiple playthroughs, and the mechanical variety helps that considerably. Helping just as well is the non-linearity. While the first few Mana Spirits need to be obtained in a set order, each playthrough’s opening and ending act is dependent on whoever the main playable character is. More importantly, most of the second half can be tackled however they want, with a level scaling system in place to ensure that the party can handle any Benevodon (formally known as God-Beasts) in any order.

Considering how Secret of Mana opened up its world to the player, but still kept the story relatively on rails, the fact that Trials of Mana offers genuine freedom is equal parts surprising and welcome. It makes for an experience catered specifically by the player for the player. Better yet, while tackling the game in some orders can lead to more difficult encounters, Trials of Mana features a much neater difficulty curve than its predecessor, keeping the challenge consistent but never totally brain dead.

It is worth noting just how much restraint Trials of Mana shows when looking back on Secret of Mana. While there are some references here and there, the gameplay very much opts to be as original as possible. The game’s overall aesthetic even greatly differs from its predecessor, prioritizing a grounded color palette over Secret’s fantastical aesthetic. There are basically no dungeon or boss references either, keeping the order of events between both games special.

Narratively, none of Trials of Mana’s three plots are particularly engaging, but they’re all far more involved than Secret of Mana’s rather subdued attempt at storytelling. Instead, Trials shines when it comes to theming. The story never actually allows the party to use the Sword of Mana, instead using the weapon as a literary device. The Sword of Mana represents hope and the idea that humanity can co-exist alongside Mana. The fact that none of the playable characters can use the weapon not only speaks volumes to how the franchise interprets the relationship between humanity and Mana (negatively) but how Mana influences individual humanity (positively.) That alone keeps the story thematically interesting if nothing else.

If there’s one thing that makes Trials of Mana such a great sequel, though, is how it positions itself in relation to Secret of Mana. While the game directly looks at its predecessor to improve itself, it never attempts to replace Secret of Mana. Rather, it exists as a companion to the game that laid down its foundation. There are clear mechanical improvements, but nothing is reiterated, recreated, or reimagined. Trials of Mana may not be able to exist on its own, but it’s developed in such a way where it doesn’t directly impact Secret of Mana’s legacy. Trials of Mana’s references are subtle, rooted in musical motifs, visual cues, or just familiar gameplay scenarios.

Even as a narrative prequel, Trials of Mana doesn’t actually set up anything important for Secret of Mana, instead simply existing as an earlier point in the franchise’s history. Not only does that allow Trials to forge its own identity, it helps the game remain accessible to anyone unfamiliar with Secret of Mana without alienating fans of the franchise. Almost all the characters are new, all the lore is firmly established, and the story is self-contained even if the main themes are directly in-line with both Final Fantasy Adventure and Secret of Mana.

If there’s one Mana game to play, realistically, it’s Trials of Mana. Final Fantasy Adventure has an incredible story, better than its successors, and Secret of Mana reflects such an important and exciting era of game development, but Trials of Mana is just way more fun to sit down and play than either of its predecessors. This is a sequel that manages to show restraint while also pushing its franchise’s core mechanics forward. It has a unique identity of its own, not just in its franchise, but on its console. Trials of Mana is what happens when a sequel prioritizes creative, interesting gameplay first and foremost.