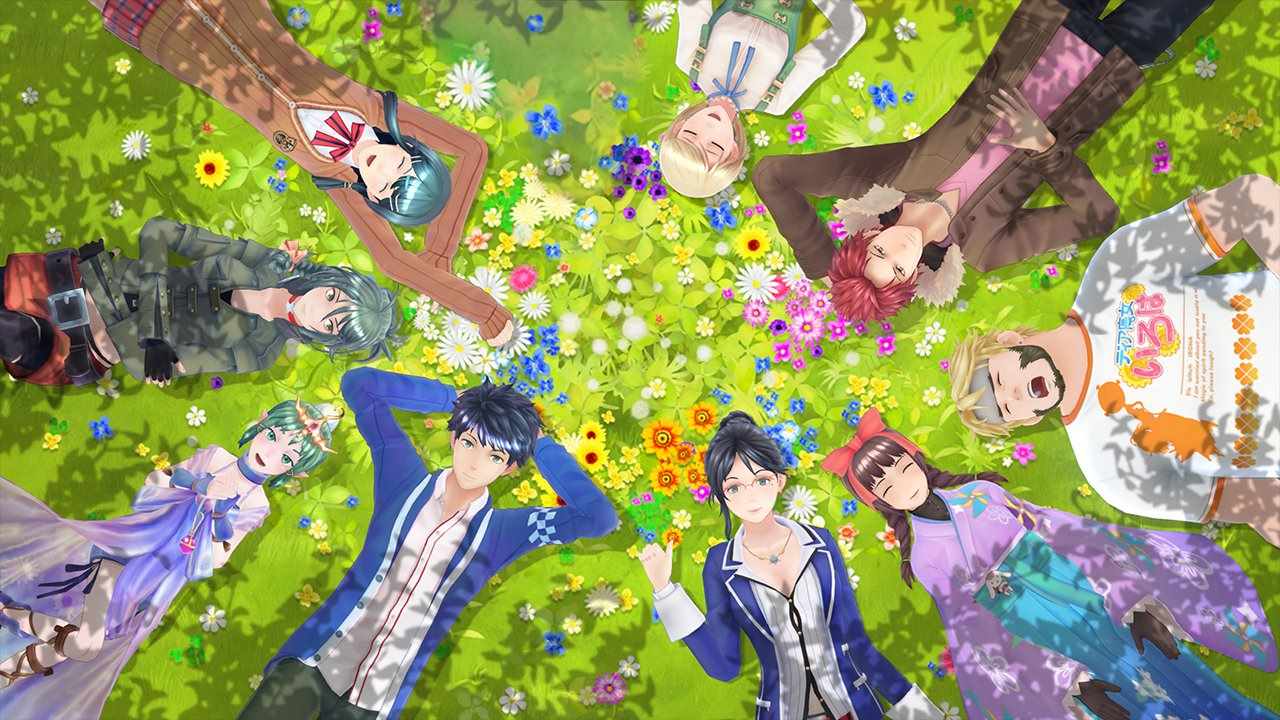 After a year of desolate and grim role-playing games such as Dark Souls III and Darkest Dungeon, Atlus’ latest project, Tokyo Mirage Sessions #FE, stands out as a vibrant, upbeat departure from the current gaming landscape. Combining two pillars of the JRPG genre, the newest Wii U exclusive blends the complex turn-based combat of the Shin Megami Tensei series with characters and aesthetics from Fire Emblem to create something wholly unique to tide fans over until the inevitable, yet the far-off release of Persona 5. Although a few questionable design decisions keep it from ever reaching the same heights of its predecessors, the directors of the often under-appreciated Shin Megami Tensei: Strange Journey have created one of the most utterly unique RPGs I’ve ever had the pleasure of playing. Since its announcement in 2013, Tokyo Mirage Sessions #FE’s development was kept tightly under wraps, due to the developers’ struggle to decide on the projects’ direction. Although it was originally conceived to resemble Fire Emblem’s grid-based, tactical encounters, (reminiscent of Shin Megami Tensei Devil Survivor Overclocked’s grid combat), Fire Emblem’s developers, Intelligent Software, encouraged the Atlus team to stick to what they know, resulting in gameplay that is more similar to traditional JRPGs like Persona. Because of this, the Fire Emblems aspects of the game are significantly downplayed, in favor of establishing a more contemporary setting, akin to Atlus’ previous games. What truly sets it apart from its competition is its unabashed obsession with Japanese culture and tongue-in-cheek presentation. True to its marketing, J-pop ballads, endearing idols, and otaku staples create a sense of enthusiasm that is sorely lacking in modern games, embracing its inherent ridiculousness and capitalizing on the spectacle of watching teenagers undergo Sailor Moon style transformation to destroy nightmarish creatures from another world. Famed art director Fumitaka Yano turns in his most expressive work yet, seamlessly combining the styles of not only the Shin Megami Tensei and Fire Emblem, but incorporating contemporary Japanese aesthetics from cultural centers like Shibuya. This energetic tone informs every aspect of the game; crowds of monsters cheer on our protagonists as they move across the battlefield; singing and dancing become integral to the narrative itself, even the menus are dripping with style and polish. Every event is framed as an audio-visual spectacle of grand proportions, transforming even the most mundane tasks like crafting new items and re-outfitting your party into quirky moments of excitement. Halfway through the main story, I’ve pulled myself away from the TV just to write this review, and even though there are a few issues that are impeding my enjoyment, the game does so many things right that it was worth the wait.

Having begun Tokyo Mirage Sessions #FE shortly after viewing the newly released psychological horror film The Neon Demon (coincidentally also concerned with the importance of entertainers in our world, but with a much more grim premise), I experienced a veritable tonal whiplash from the juxtaposition between the two. Though it’s possible that this colored my initial impressions of the game, I found its opening sections to be a bit lackluster. Before it becomes clear that the game is purposefully poking fun at cultural stereotypes and genre conventions, the opening cinematic sets up a more dramatic narrative for the game that is then almost completely resolved and demystified in the span of two chapters. Luckily, the story quickly assures players that it’s hardly taking itself seriously, and mainly serves as a loose means to create a world where aspiring entertainers can magically defeat demons. The basic premise revolves around a group of teenagers joining a talent agency called Fortuna Entertainment that serves as a front to investigate the mysterious beings that are invading Japan, known as Mirages. Our heroes soon realize they possess the ability to control and ally with these mirages, who are revealed to be a mix of iconic Shin Megami Tensei enemies and Fire Emblem characters. Legendary warriors like Chrom, Caeda, Cain and Tharja accompany the main cast as they search for a way to save the world. Although it’s great to finally see Fire Emblem get recognition on a home console (outside of Smash Bros), I was disappointed with how underused these characters were throughout the story. Lazily hampering all of the Mirages with amnesia for the majority of the story, they add little to the narrative apart from playing the typical “out-of-time-and-context” trope and the occasional meta-joke. Tharja’s iconic stalking of the main protagonists and Chrom’s cheesy-yet-inspirational speech to his teammates are brilliant moments for fans of the franchises, but are too few and far between to leave a lasting impact or affect newcomers. Instead, the majority of the story is dedicated to the trials and tribulations of a troupe of walking anime clichés such as the bland protagonist, the clumsy Mary Sue love interest and the token “cool” best friend. Despite its predictability, the plot has kept me invested for many chapters thanks to the endearing writing and lighthearted tone. One’s appreciation of the storyline will be almost entirely based on their opinion on Atlus games and anime in general, and while I personally enjoyed it immensely, it certainly isn’t breaking any new grounds, nor will it appeal to everyone.

What really solidifies Tokyo Mirage Sessions #FE as a worthy JRPG is its show-stopping combat system. Fusing Fire Emblem’s simplistic “weapon triangle” system with Shin Megami Tensei’s expansive array of magic, battles pit three selectable party members against any number of monsters, each with their own tactics, weaknesses, and abilities. After learning the basics of attacking, using EP to perform special skills, managing items, and guarding in the prologue, the game gradually introduces a plethora of mechanics that come together to create one of the most intuitive and enjoyable fighting systems I’ve seen all year. The main draw comes from the implementation of “Sessions,” combo attacks that can be performed by other party members in rapid succession after exploiting a specific enemy’s weakness. Executing these Sessions build up “SP,” that can be spent to perform devastating attacks called Special Performances that can completely annihilate hordes of Mirages in a single blow. In a manner similar to Persona’s social link mechanic, characters’ relationships can be improved through leveling them up and completing their sidequests to unlock even more destruction “Duo Arts.” Additionally, various items and armor pieces can be equipped to further customize your party members and create your own play style. By collecting miscellaneous items from defeated enemies and convenient items chests, players can enter the Bloom Palace, where Fire Emblem fan-favorite, Tiki (here taking the form a virtual idol in the vein of Hatsune Mikue), can perform “Unity Rituals.” Whereas “Radiant Unity” simply grants new passive abilities to characters upon plot progression, the much more fleshed out “Carnage Unity” system allows players to forge various weapons with their own stats and moves. Since each character has a limited amount of equipable weapons, unity, carnage, and radiant skills, the player has to pick and choose what they want to use and level up. By doing this, the game fosters a ton of player choice, and apart from a few specific scenarios, combat remains extremely open-ended and versatile.

Outside of the battle system, exploration is broken up in to two distinct sections, wandering around Tokyo, and venturing into the other-worldly Idolspheres, that are inhabited by the Mirages. Walking around the crowded streets, markets and locales should be a fun distraction from the intense combat but is hampered by frequent load screens that make getting anywhere a chore and uninteresting dialogue with characters that serve no purpose. Making these moments more bearable is the implementation of the gamepad as a type of Smartphone that contains the social app “Topic,” allowing the player to interact with other characters in their free time. It is never made overbearing (like many other gimmicky gamepad implementations), and serves as a simple way to characterize the initially one-note cast through occasional text conversations and emojis. The app also acts as a quest log and map, showing relevant missions and floor plans of dungeons respectively. The map is especially useful in the monotonous Idolspheres that the player has to trek through. Although these locations are visually stunning and distinct from one another, their designs are fairly uninspired, impeding progress with ridiculously simple puzzles and needless backtracking that significantly hurts the flow of the game. Further damaging the game’s pace, Unity Rituals can only take place outside of dungeons, meaning that continuous trips in and out of these sprawling areas are required to make meaningful changes to characters’ weapons and unlock new Unity abilities. Semi-frequently placed warp zones and spells that instantly transport your party to the Bloom Palace do little to help this, as it still requires the player to endure several loading screens to get anywhere. Another minor gripe I have is the implementation of manual-saves, that allow the player to save their progress at any point in the game without penalty. Since falling in battle and receiving a game over requires you to restart from a save anyway, there’s no reason that the game shouldn’t automatically save after every battle, as it is both the most optimal way to proceed and completely unlimited.

While it’s not quite what audiences expected to get when we first heard of a Fire Emblem and Shin Megami Tensei crossover, Atlus made the bold decision to deliver a completely unique experience that took inspiration from two historic franchises. Regardless of its occasional narrative shortcomings and blunders in level design, Tokyo Mirage Sessions #FE is one of the most refreshing RPGS I’ve played all year. With an intriguing premise, outstanding aesthetics, and an amazing combat system, I couldn’t recommend a better game to fans clamoring for Persona 5.