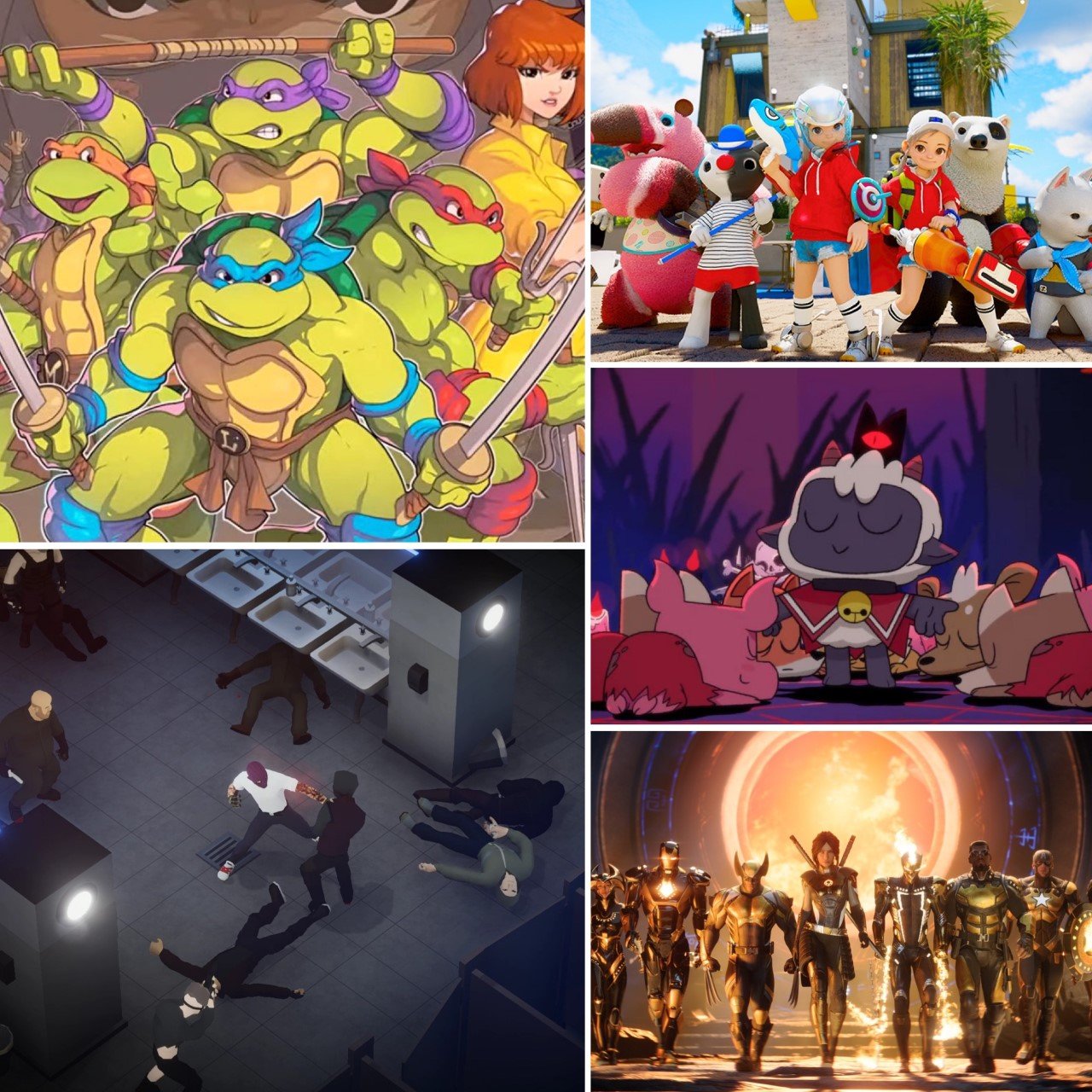 Gamescom 2021 has wrapped up and we got a fair amount of trailers for various games, both new reveals and previously announced titles. There were some genuine surprises thrown into the mix along with some expected releases. With that in mind, we are going to be taking a look at some of the most interesting and entertaining trailers that were on display at the online gaming event.

Giants Uprising is an upcoming indie game from Polish game developers Varsav Game Studios. The trailer for the game- a medieval fantasy game from the perspective of a giant freed from human enslavement- tells a fantastical story of a mythical creature abused for nothing other than his race. The trailer has no voiceovers but there is none needed, as we see the giant- the player character- struggle against the persecution from humans and stumbling upon a graveyard filled with the bones of his people. Unfortunately, the quality of the trailer doesn’t reflect the demo that was recently released via Steam. But that’s not what this list is for! Despite the gameplay of Giants Uprising leaving a lot to be desired in its current state, the trailer was certainly one of the best of Gamescom this year.

I’m not particularly into driving games but you have got to hand it to the Forza series in that it is one of the most- if not the absolute most- stunning driving games in terms of visuals. The “Initial Drive” trailer for Forza 5 Horizon shows off the first eight minutes of the game and the visuals are top notch. The Forza games- from UK game studio Playground Games- always manages to excel itself with each instalment and there are some insane moments that we see here, such as cars driving off of cliffs, out of planes, across vibrant landscapes and into dust storms. Everything here is gorgeous and even if you’re not a fan of driving sims, I would still advise watching this for the visuals alone

The new trailer for Teenage Mutant Ninja Turtles: Shredder’s Revenge hits the nail on the head when it comes to nostalgia trips. The side scrolling, 80’s style pixel brawler- coming to the PC and Nintendo Switch next year- got a trailer showing off the recently announced April O’Neill as a playable character. We also got a look at the gameplay which looks to be taking inspiration from old school arcade fighter games. Everything about this game looks awesome; the art style, the music, the character designs (based on the old animated show), the combat and more. Developed by Dotemu- the team behind Streets of Rage IV– this one is definitely one to watch, particularly if you’re a fan of retro gaming.

This particular trailer is a cinematic and doesn’t show gameplay but it is certainly an engaging trailer that cleverly introduces the multiplayer aspects of the upcoming game whilst also giving the audience a glimpse of the narrative. The trailer is told through the eyes of Commander Agryna, a Spartan commander who is shown to be the new trainer of Spartan recruits. As she asks the recruits why they are there for training, we see a flashback to her as a teenager during the London siege from The Covenant Empire. She is saved by the Spartan soldiers, whose bravery and selfless heroics have a great effect on her. It’s the little things about this trailer that make it great. I love the nods to the original soundtrack as well as the stoic yet calming presence of the Spartans themselves. Seeing the Spartan soldiers through the eyes of a civilian shows just how strong their presence is. This trailer also acts as an introduction to the multiplayer, which will have its own narrative. The multiplayer trailer for Halo Infinite captures the essence of what it is to be a Spartan whilst not directly putting the audience in their shoes, which is why I found it so impressive.

You’d be forgiven if- from the title of the game – you thought that Outbreak Island was a knock off combination of Dead Island, Dead Rising and every other zombie video game ever. That’s what I thought when I first started watching it. However, I was left pleasantly surprised by the mystery that the trailer for Outbreak Island leaves lingering. The indie game trailer- from developers Tiny Magicians- suggests a mystery to be solved on said island as well as elements of detective work and investigation, showcasing a camera as a method of deducting. The game itself may well be just another zombie clone but the trailer was certainly promising and unexpectedly exciting.

This is probably going to be a somewhat controversial addition as the trailer for the Saints Row reboot- from Volition- has got a lot of people riled up. Some say that it doesn’t look like a Saints Row game at all- and I can’t disagree with that- whilst others are criticising the designs of the main cast of characters, accusing Volition of catering to the “Gen-Z” generation with “woke millennials” becoming the stars of a series that was about scrappy gangbangers seizing power. I can see the arguments for that too. But- and hear me out on this one- let’s try and look it purely for what the trailer shows. I don’t think this would have gotten anywhere near as much flack if it was an all-new game rather than a Saints Row reboot. The main trailer is a cinematic but the developers have released gameplay footage in the days following Gamescom and this is where we get to see hints of the manic Saints Row franchise that we know so well. It is the characters themselves that seem to be causing the most controversy, seeming more like young, tech savvy entrepreneurs than badass gangsters like the original Saints. The cinematic trailer shows the new characters pulling off a heist and whilst I do agree that these characters don’t look anywhere near as hard-core as the original cast, they don’t seem all bad. People complained that the series had gone too far off the deep end following the release of Saints Row IV in 2015 and this reboot is a chance to start again with a clean slate.  Yet, we are still unhappy. Maybe just give it a chance, guys?

Indie developers Massive Monster and publishers Devolver Digital are bringing together two of my favourite things: cute, fluffy animals and the occult. The protagonist of Cult of the Lamb is an adorable little lamb who is on the way to the chopping block when he is saved and given god like powers by an unknown saviour. You can then use said powers to build your own cult, taking out any non-believers and false prophets in your rise to become the ultimate lamb God. I am one hundred percent here for all of this and I cannot wait for the release.

I am still not entirely sure what DokeV is and at this point I am too afraid to ask. The open world adventure game- from South Korean game developers Pearl Abyss- kind of looks like if Pokémon, Digimon and Animal Crossing were shoved into a blender and then microwaved on the highest setting for ten minutes. What I’m trying to say is, I already love it. The trailer shows characters fighting giant fish, riding llamas, setting off lanterns, skateboarding and bicycling in a busy street- because apparently no one in this world has responsible parents- and bouncing on a space hopper. There is no actual explanation as to what the games main themes are but honestly I do not care. The bright colours, k-pop music, cute creatures and random activities have me sold. Oh and the graphics are dazzling. Even if you’re not into this cute and quirky style of game, you have to at least appreciate the visuals of this trailer. Whatever DokeV might be, I want to play it and I want to play it now.

I don’t think anyone was expecting the next Marvel video game to be based on the 90’s Midnight Sons Marvel Comics series but I really like that they went there. Marvel’s Midnight Suns is a tactical role playing game- single player (yay!)- from 2K Games and developers of the game franchises XCOM and Civilisation, Firaxis Games- that will feature characters from the Midnight Sons comics as well characters across Marvel such as the X-Men, The Runaways and the Avengers. The trailer is pure epicness, showing off characters the likes of Wolverine, Iron Man, Doctor Strange and Ghost Rider in cool black and gold outfits. We also get to see the player character- known simply as “The Hunter- who will be fully customisable and was created in collaboration with Marvel Comics. The game will be a turn based RPG and I think this could suit the Marvel world perfectly in terms of video games. Marvel’s Avengers was a bit of a let-down to many when it released last year but Midnight Suns seems a little bit out of the blue and I think that this can only be a good thing. As a massive fan of both the Marvel comics and the Marvel Cinematic Universe, I’m definitely looking forward to seeing how this one plays out.

Published by Humble Games and developed by one man- Jacob Dzwinel– Midnight Fight Express looks like an incredible indie action/fighting game with brilliant visuals, vibrant character designs and plenty of violence. I’m still shocked that this game is being developed by one person. The game would look impressive if there was a whole team working on it but knowing that most of what we see in this trailer is down to the efforts of one person makes the whole project seem all the more incredible. There is so much character in this game from what is shown in the trailer and it speaks volumes for Jacob as a game developer when you consider that this indie title that he created was one of the best games on show at Gamescom 2021 with the most compelling trailer.