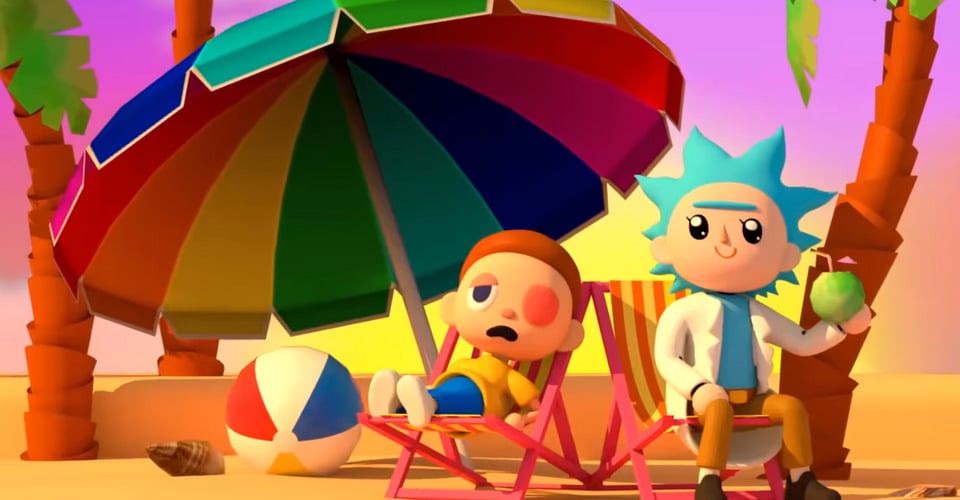 Adult Swim is known for producing some bizarre and often disturbing advertisements for one of the channels most popular shows Rick and Morty. The latest promotional material for the adult cartoon from the channel- a parody of Nintendo’s Animal Crossing game series- switches it up a bit by being shockingly cute, which isn’t a phrase you would normally affiliate with Rick and Morty.

The advert begins in Adult Swims usual style- a little dark with a pinch of creepy thrown in- as 3D versions of Rick and Morty are seen collecting a shovel and an axe. You’d be forgiven for thinking that the grandfather and grandson duo are planning on committing a crime or plotting a murder at this point but it would seem that their intentions are surprisingly pure. As they travel through Rick’s portal, the two find themselves in the cute and colourful world of Animal Crossing. What a twist, am I right? I mean, it would have been if it wasn’t for the title and thumbnail of the video but I digress.

Rick and Morty begin to frolic within the Animal Crossing universe, playing leapfrog, finding gems, digging holes (and then promptly falling into them) and even building giant robots. Pretty sure they haven’t added that feature to Animal Crossing: New Horizons just yet though. I like the additions of an Animal Crossing style Mr Meeseeks that you can see hanging around in the background. I think I spotted a Squanchy too, which is definitely a character I would not normally associate with the adorable Animal Crossing world. I refuse to go into further detail. It would seem that Morty has the worst luck even in the video game universe though; as we see him get chased and attacked by a swarm of bees.  Rick also adds insult to injury by crushing Morty’s tent with his robot. That’s still pretty much in character.

There isn’t even a creepy or dark twist at the end of the animation. It’s just kind of sweet and wholesome and yet still very much Rick and Morty. After creating all sorts of odd promotional material- including two awesome anime parodies– it’s not that surprising that they have ventured into video game territory. I hope that Adult Swim are able to keep giving us this weird and wonderful crossover style promotion in the future.