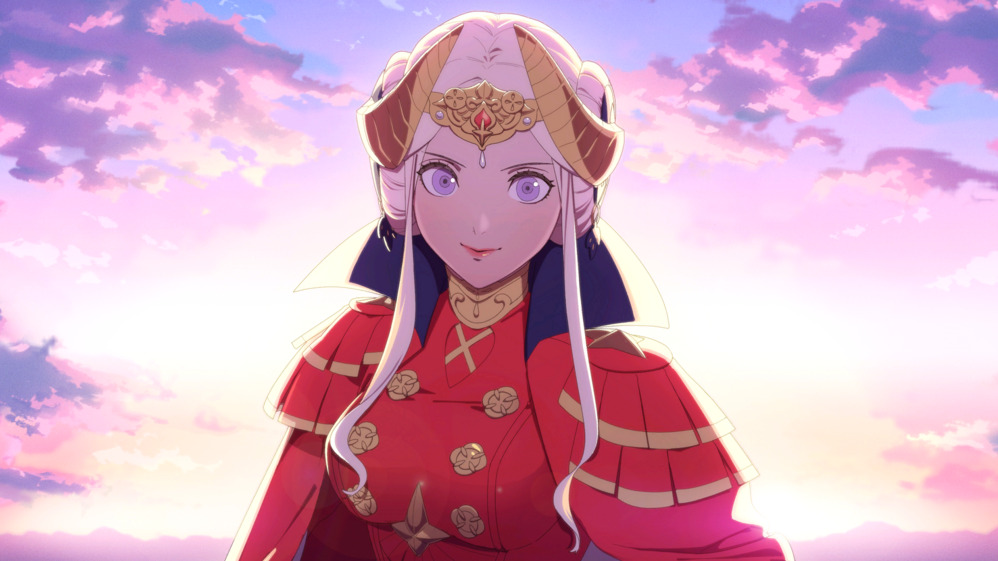 One of the many things Fire Emblem: Three Houses excels in most is creating intricate character designs that not only look cool but also give a great amount of insight into each individual’s true dispositions. The personality-based designs seen throughout the game are especially prominent after the five-year timeskip when all the students receive updated and more mature looks. Fire Emblem: Three Houses Character Designer Chinatsu Kurahana and Game Director Toshiyuki Kusakihara aimed to create designs for the characters that reflected where they had been and what they had been through during the past five years. Kurahana’s artwork brought these beautiful designs to life as they further enhance the game’s second arc. While we can not pick all of them, these are just ten of the best Fire Emblem: Three Houses war phase designs that stand out from the rest in terms of pure style.

Lorenz is one of Fire Emblem: Three House’s characters that drastically improved between his pre-timeskip and post-timeskip designs. His war phase attire thematically fits him well, unlike that of his old Garreg Mach Monastery uniform. Whereas his haircut before the timeskip did not present his class, Lorenz’s new hairstyle featuring a longer cut on one side and pull back on the other is much more befitting of a noble. Kurahana’s portrait for his aged version of the character also improves his expression and pose to fit his personality better.

Lorenz wears some of the brightest armor of all the male characters, matching the Golden Deer’s usage of more exotic tones in all of its students’ attire. The rose he wears is built into his armor, as opposed to it being a real rose pinned to it; a match that fits his new design better than what he previously wore.

Ferdinand definitely looks the part of a noble prepared for battle as he yields a stylish coat and cape accented with red, blue, and gold—colors that surprisingly complement his hair well. He also wears quite a bit of armor, unlike his pre-timeskip appearance. His boots are armored and tall, likely because he needs more protection on his legs due to being a mounted unit. On top of this, he additionally can be seen with spurs on the back of his boots to further reinforce that specific idea.

After the timeskip, Ferdinand’s hair gets long, although not for fashion purposes. He simply never had the time to cut it because of his focus on the war. Since this hairstyle was not intentional, it is a bit messy compared to his shorter clean-cut look. Despite this, it still suits him well as Ferdinand is still able to don the look of a noble, but also shows that he is extremely focused on the battles at hand.

Dorothea wears a rose-colored dress after the timeskip, referencing her iconic battle lines revolving around thorny roses. The dress looks akin to something that both a performer and a mage would wear, combining her two talents into one practical outfit. This style is slightly reminiscent of Manuela’s as both of them wear glamorous dresses that would fit right in on stage — perhaps Manuela has truly influenced Dorothea’s style.

Her hair does not change much, but the lack of a hat and her new earrings help present her with a far more sophisticated look. Everything about Dorothea’s new appearance makes her seem as if she would fit in with the higher class even though she is in reality a commoner herself. It is nice to see the formerly poor orphan grow up to be an elegant young lady, even if the war has taken a toll on her mentality.

Most of the male designs in Fire Emblem: Three Houses prioritize practicality over style in their outfits after the five-year gap. Dimitri is definitely no exception to this. He wears a suit of black armor with a blue accent on it after the timeskip. However, what makes this attire particularly special is the fur-lined cape. The cape provides a recognizable piece of clothing to associate with him and comes with a practical aspect. Faerghus is known to have a very cold climate; so the fur on the cape is obviously a way of helping keep Dimitri warm.

Another notable part of his war design is his eyepatch, which is present in all routes except for Crimson Flower. Despite the eyepatch being so iconic, it was not initially planned to be part of Dimitri’s original look. In an interview about Fire Emblem: Three Houses, Kusakihara said that he asked Kurahana to add an eyepatch to Dimitri’s design after seeing her first illustrations of him. He also mentioned that Dimitri does not have an eyepatch in Crimson Flower because his experiences were different. However, Dimitri’s post-timeskip design has become more recognized because of his eyepatch.

While her pre-timeskip hair was certainly cute, Mercedes’ second style makes her appear more mature and elegant. Her new expression makes her appearance more refined as well, most likely because she is the second oldest student behind Cindered Shadows’ Balthus. Her hairstyle and face bring to mind a motherly figure, a role that she fills in the Azure Moon route.

In addition to her motherly appearance, her clothes, cap, and veil resemble that of a nun. As a devoted follower of the Church of Seiros, the decision to make her clothes reflect that faith was an obvious choice for how the character should look. Her outfit’s color scheme of beige and brown gives off a cozy vibe that fits in with the rest of the Blue Lions. Not only is she dressed to be warm in chilly Faerghus, but she is also dressed to show off her sympathetic personality.

During the school era, Marianne had dark circles under her eyes, messy braided hair, and usually wore a rather sad expression before the war phase begins. The five-year timeskip definitely helped her grow into a more confident appearance. The most remarkable thing about her war phase design is the fact that her melancholy expression and dark circles have disappeared, making her look happier than before. Her hair, while similar to her old hairstyle, shows off its intricate design more clearly.

Like Mercedes, her clothes bring to mind a faithful individual due to Marianne’s default specialization in Faith. Her long dress shows that she is usually confined to using magic from afar, rather than attacking up close. The dress is preferably plain compared to some other clothing in this game, but it suits her character well. Her most important aspects post-timeskip are her complicated hairstyle and healthier complexion. Her simple outfit allows the eye to be drawn to those features instead.

Petra has a unique war phase design because she embraces the style of her homeland, Brigid. In Fire Emblem: Three Houses, Brigid is an archipelago with many beaches, so Petra dresses according to her home climate. Fódlan may be colder, but she still sticks to her usual style. Petra’s clothes are very vivid despite her main color for other class outfits being a shade of pink. This is likely because the colors of her usual clothes match that of the lush, tropical islands of her homeland.

Post-timeskip, she forgoes the braid in favor of a ponytail. She may have gotten rid of her old braid, but she still retains the same small knots she had before. Despite her hair being similar, she still had one of the most drastic transformations of all the students. Her clothes are what set her apart from everyone else and show her loyalty to Brigid, even during Fódlan’s war.

Lysithea is one of the youngest students to attend classes at the Garreg Mach Monastery—15 in the school phase and 20 in the war phase. This is important to her character as she hates being treated like a child and tries to act more like an adult before the timeskip. After five years, Lysithea clearly matures significantly. While her hair does not change much, her face looks much more older than it did before. Her face shape becomes more slender and her features notably show a passage of time. Seeing her grow up is especially impactful for players who become immersed in her backstory.

Lysithea wears a short dress with white tights, possibly because she is known as one of the best offensive magic users and therefore may need better mobility than say, Marianne or Dorothea. Though her clothes are well suited to battle, they still have a cutesy look to them alongside the refined details. This could be a reference to how she still has her slightly childish traits, such as her love of sweets and fear of ghosts. Her design seems to show off those youthful aspects of her combined with her mature traits.

In comparison to the other students, Claude is one of the most notable war phase designs due to his atypical clothing style. What stands out the most on him is his sash and the multicolored pom-poms attached to it. This is not simply a design choice, but a reference to a mix of real cultures. His sash is based on a Kontush belt, which was worn by Polish nobles but was made in Persia. Claude’s post-timeskip design likely had much thought and research put into it in order to properly portray his Persian influences.

A notable aspect of Claude, in the same vein as Dimitri’s eyepatch, is the Golden Deer leader’s facial hair. This is especially striking since not many playable characters in the recent anime-style games have had facial hair, and those that do are usually older men such as Saber from Fire Emblem Echoes: Shadows of Valentia. This would serve to make Claude distinct, if not for Seteth having a similar style of facial hair.

Edelgard already stood out as having a detailed school phase outfit, but her attire five years later is far more memorable. Her design after the timeskip is a masterpiece; the bright red dress, the ornate gold details, the large cape, and a horned headpiece all make her look like the definition of an emperor. Edelgard is the first female of the Rudolf archetype, named after the emperor of Rigel in Fire Emblem Gaiden and Shadows of Valentia. Due to Edelgard being of this archetype, she bears resemblance to previous emperors such as Hardin from the Archanea games and Walhart from Awakening. Kurahana likely referenced previous characters similar to Edelgard in order to decide on her clothes. Those references gave her a powerful and intimidating appearance similar to the archetypes that came before her.

Her horned headpiece adds to the aforementioned intimidating appearance, while still making her wardrobe very regal. In the routes where she is an antagonist, the horns certainly give her a villainous look; however, even when she is the protagonist, they still manage to fit her character. The genius of Edelgard’s design comes from the fact that she can easily be molded into the role of a protagonist or antagonist. She is always represented as a powerful authority figure in every route. Her design is not specifically for that of a hero or villain. It is for a character that is powerful regardless of the story they follow. Edelgard’s empress costume makes her one of the most well-designed characters in all of Fire Emblem: Three Houses.