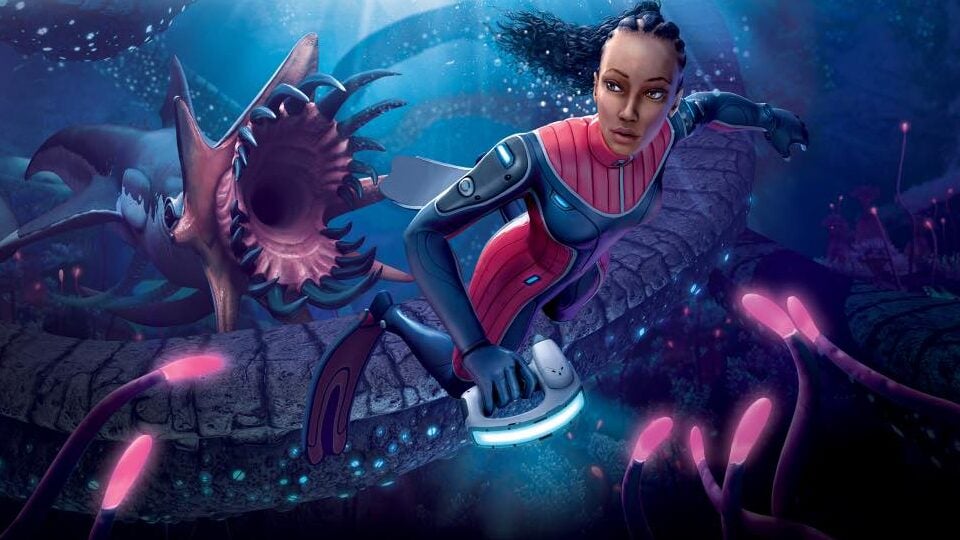 There is an ocean of games that some players never bother with. The battle royale, the life simulator, the tactical role-playing game, the visual novel, and dozens of others are often considered niche or difficult to break into. Subnautica: Below Zero, an arctic follow-up to the mostly underwater craft-a-thon Subnautica, is an example of such a game. Though the barrier for entry is high, Subnautica: Below Zero becomes a mesmerizingly addictive experience once players master the gameplay loop.

Dipping a Toe In the Water

Where Subnautica placed players in immediate danger by having them escape from a crashing spacecraft, Below Zero has more of a slow-burn approach. Player character Robin Ayou, a spacefaring xenologist, chooses to travel to distant Planet 4546B because she feels there is more to the story of her sister Sam’s death. Sam worked for Alterra, one of those intergalactic conglomerates that always seems to steamroll their way across the galaxy in science fiction stories. Alterra has very Weyland-Yutani Corporation vibes; Robin had her misgivings when her sister went to work for Alterra, only to have her worst fears confirmed when Sam died tragically and under mysterious circumstances. Uncovering just what happened to Sam in the harsh, icy environment of Planet 4546B is at the heart of Subnautica: Below Zero, but the game doesn’t railroad the player into anything. This is a fairly nonlinear experience; the focus is equally split between crafting and exploration.

Exploration is the key to progression in Below Zero. Robin can’t survive on the surface for any extended period of time, as the frigid temperatures will cause her to go into hypothermia and perish before too long. Underwater, Robin fares better, but there are perils here, too. Oxygen is limited, and so Robin must strike a balance between scavenging the glaciers of the surface and the depths of the alien ocean to scavenge food and craft tools for survival.

Newcomers to the survival and crafting genre might find the beginning of Below Zero overwhelming. Being dropped into the middle of a freezing ocean with nothing at all will test even those diehard fans of the genre. The joys of Below Zero lie in finding a way to navigate this extremely dangerous environment. This first-person adventure feels vast and limitless, and to the credit of the developer, a little bit terrifying. The situation might not be easy, but there is something profoundly satisfying in learning how to carve out space in the midst of hardship to uncover secrets beneath the surface.

After being nudged towards a survival pod in the shallower parts of the sea, Robin’s adventure and the true gameplay loop begins in earnest. She gains access to some crucial pieces of equipment: a fabricator, which lets her craft materials into useful tools and even sustenance like food and water; and a storage locker, where she can stash materials for later use. From here, the player can essentially do what they please. The ocean may be dark and full of terrors, but it also teems with vibrant flora and fauna of truly awe-inspiring variety.

Life Can Be Better, Down Where It’s Wetter

Figuring out how to navigate more efficiently is the first order of business. By rummaging around the materials left behind by previous visitors, Robin can acquire helpful blueprints that provide her with recipes for the fabricator. Creating a pair of flippers that let her swim faster is crucial, as is crafting an oxygen tank that allows her to breathe underwater for a longer period of time. Within a few minutes of crafting and experimentation, players can take Robin further from their central hub to deeper depths and higher heights.

The core loop is simple: acquire blueprints for something awesome, find the necessary materials, and craft away. Often, trying to craft one specific item will necessitate the player to experiment with a totally different branch of the crafting tree and soon enough, they’ll be working on several different tools or pieces of equipment at once. Crafting a set of necessary tools or game-changing equipment feels like fitting a key in a lock. There is some trial and error involved, but players are encouraged to latch onto one or two specific things to work towards. Pinning crafting recipes in the corner of the screen is simple, and helps provide a mini-objective in the face of Below Zero‘s vastness.

A word to the wise: fabricate the scanner as quickly as possible. The scanner helps unlock several core features, and once the player starts scanning objects and animals they won’t want to stop. There is a Metroid Prime-like satisfaction in cataloguing every inch of Planet 4546B, and Robin even mentions that her sister would want her to make a record of the alien life surrounding her. This meta-commentary helps provide the player with a sense of freedom. Yes, there is a compelling mystery to solve, but maybe the player simply wants to cruise around in a cool submarine they fabricated, scanning everything from adorable Pengwings to the disturbingly round Hoopfish. There is always something to see, and the fauna only becomes more incredible the deeper the player goes.

An Ocean’s Bounty, but Don’t Surface Too Quickly

Ernest Hemingway famously coined the “iceberg theory” of writing. His stories only presented a fraction of what was actually happening on the page, like how an iceberg only shows a few peaks above the surface while the vast majority of the iceberg is beneath the waves. Players new to the mechanics of Subnautica: Below Zero will find plenty to engage with on the surface level. There are enough narrative breadcrumbs to guide players towards a satisfying experience (finding Outpost Zero is a must for the story-focused), but that’s just a small part of the full experience of Below Zero.

It is possible to make it through this game with the bare minimum. Skating through with just a knife, an inventory full of food and water, and maybe one or two traversal options is one way to play. But once players grow invested in kitting out a full base of operations, the game becomes something else entirely. There is a reason that Minecraft is a juggernaut for creative types. Once the loop of scavenge-craft-scavenge comes full circle, nothing else can scratch the same itch.

All that said: it can be frustrating to be stuck looking for the same handful of materials over and over again. Materials like gold or silver ore seem in short supply in the early game, and without careful examination of supplemental materials in the PDA, some story beats fall a little flat. Below Zero wants players to be meticulous, and for the impatient, might not be the best fit. On the Nintendo Switch, the beauty of the deep ocean stutters and lags occasionally, which can easily break immersion in otherwise-breathtaking situations. Save often, because some bugs can cause the game to crash unexpectedly. There is nothing more heartbreaking than finally crafting the perfect item or vehicle, only to run into a bug and lose an hour of progress and dozens of farmed materials.

Subnautica: Below Zero is a more directed experience than its predecessor. However, the game is just as deep and involving. For newbies, it can be tough to penetrate, but feels incredibly rewarding once players hold their breath and step into the deep end.