Survival crafting games aren’t exactly a new genre. They’ve been around for a long time, but despite having such a simple premise, they can prove to be a source of wildly successful and endless entertainment, especially in the case of games such as Minecraft. What makes Subnautica unique, however, is the new world in which the crafting occurs. In many survival games, you are put in a perilous position of having to look for food, shelter and avoid dangers as you try to survive; now imagine this concept set on an alien planet.

Subnautica has players assuming the role of a worker on a large spaceship, the Aurora, that is shot down while flying through the cosmos. You manage to deploy from the ship in an escape pod mere seconds before the main vessel explodes, descending to a mostly-aquatic alien planet. The game begins when you crash land in an area dubbed the “safe shallows,” a protected area which contains a large variety of game to catch, as well as important crafting resources, such as copper, titanium, and lead. Immediately after coming out of your pod and entering the waters beneath, you are met with incredibly beautiful imagery. The shallows are decorated with bright, vibrant colors in regards to both flora and fauna, with clear blue water and a sandy seabed closely resembling those of the tropics. Even without considering game-play elements, the world of Subnautica itself is a thing of beauty to look at. 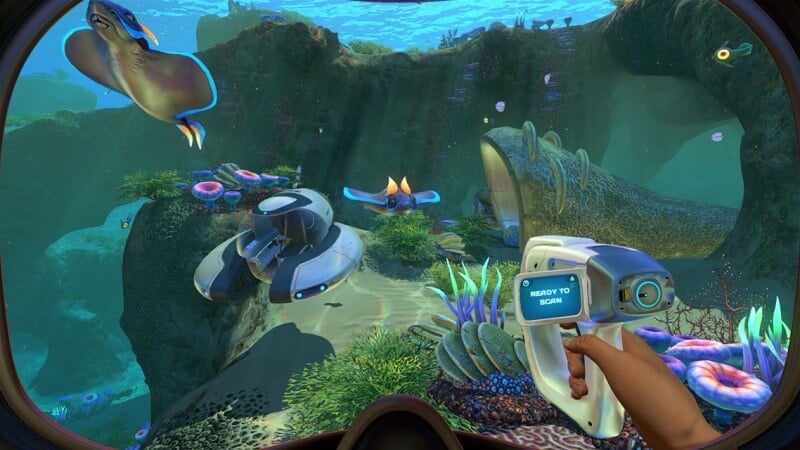 This is an advantage Subnautica has over other survival crafting games, as the setting gives the developers more freedom to play with various aspects of the game’s biome. They’re able to create beautiful foreign landscapes and peculiar creatures that pique interest by either amazing or terrifying you, but are always intriguing in their design. A game set in a place such as a forest or an ocean can be good, but the mystery of an alien planet just adds so much more freedom and intrigue to the game. Now, while Subnautica is beautiful to look at, I also need to mention that it is goddamn terrifying as well. After all, you’re on an alien planet, trying to survive with the few resources you have. Initially, I thought this was a charming and almost cute sort of experience — that is, until I left the safe shallows and went into the open ocean.

The familiar chirping of peeper fish and background music die off as you head into unknown waters. All around you is a seemingly endless ocean, and the absence of familiar noises, or even any sound at all, is terrifying. It’s like the world around you is holding its breath in fear of something lurking in the deep, but you have no idea where it’s going to come from, or when. You just know it’s there, and it can get you. Moments like these really hammer home the fear element of Subnautica. You are, after all, on an alien planet, with no current means of escape and no living crew members in sight. However, as the game progresses, whether its due to your own curiosity or the need to create resources, you will eventually need to abandon the safe shallows and head into foreign territory. What’s scary isn’t so much the sight of a monster, but rather the ambiance. You’re stuck in a constant state of unease and fear, where the feeling of dread is killing you before you’ve even been attacked. 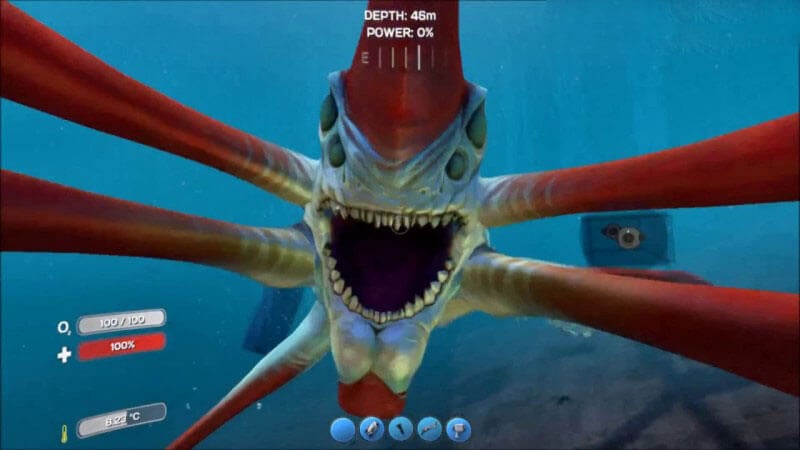 If you see one of these things, I suggest you swim like a madman. It’s called a reaper leviathan for a good reason.

Hazards are a commonly strong element of many survival games. After all, it’s not much of a survival game if you’re just leisurely strolling along; you need to actually feel like you’re trying to survive, and to elicit that the developer needs to give the player obstacles. Subnautica pulls this off extremely well. The horrible feeling of being completely exposed in the midst of the ocean is terrifying, but in order to progress, you must overcome it. Even at the very start of the game, you need to craft a knife in order to obtain coral for making drinkable water. However, the materials to do that are in a kelp forest, surrounded by leech-like creatures and beasts known as Stalkers. Due to the fact that I’m an absolute wimp, I was terrified to go near the scary-toothy crocodile fish, but I still had to so I wouldn’t die of dehydration for the fifth time in a row. Thankfully though, you don’t have to fend off monsters of the deep and various hazards completely by yourself. Being a human means you have one advantage they don’t: technology.

This is another aspect of Subnautica that I love so much. Their futuristic technology gives the player a means to not only fight back, but also to craft amazing items such as sea vessels, living compartments, and tools to aid you in your adventure. There is a device onboard your life pod known as a fabricator. This tool supplies you the means to create useful items from it, such as a computer chip from silver ore or batteries from acid mushrooms, and a host of other useful implements. When voyaging outside, you may come across scraps of machinery from the wreckage. If you scan these items, you can obtain blueprints to craft all sorts of things. I’ll never forget the first time I created an aquarium within the game and practically shrieked with excitement – not because I now had a place to store excess fish to eat later, but just because I really like fish tanks. The tools in this game can be used to fight off monstrous creatures, alter terrain or create settlements for yourself. Or, you know, just act like a twit and catch random fish with a propulsion cannon before firing them into rocks and laughing as they get completely obliterated. That’s what I did for like half the game anyways. Geez, no wonder I died like five times at the start. My point, however, is that the terrain, creatures, and technology within this game are all very unique and inventive, which adds strongly to the player’s enjoyment. I already liked Subnautica as it is, but when I found out hints to there being a mystery behind the game, I was overjoyed.

What makes Subnautica even more enticing beyond the gameplay is that there seems to be an underlying story that is slowly unraveling as the player advances. In a fashion similar to picking up tape recorders in Bioshock, Subnautica has PDA entries, digital diaries left behind by previous survivors who have written about their discoveries. While many of these entries can be small tutorials on how to obtain certain objects within the game, there are hints of the back story behind certain journal entries that indicate a bigger picture. Subnautica is still in early access at the moment and has no actual ending as of yet, but it is clear that there is a mystery to unravel as to who shot down the Aurora, and why. While other survival games may also have these elements, Subnautica supplies them with such an intriguing delivery that it makes even simple aspects of the game all the more engaging.

I personally don’t have much of an interest in survival crafting games, but Subnautica is one that seems to be a bit of an exception for me. If you like the idea of exploring an alien planet, unraveling the mystery of how a spaceship got shot down, or getting your socks scared off by terrifying sea beasts, then I really can’t recommend Subnautica enough to you.