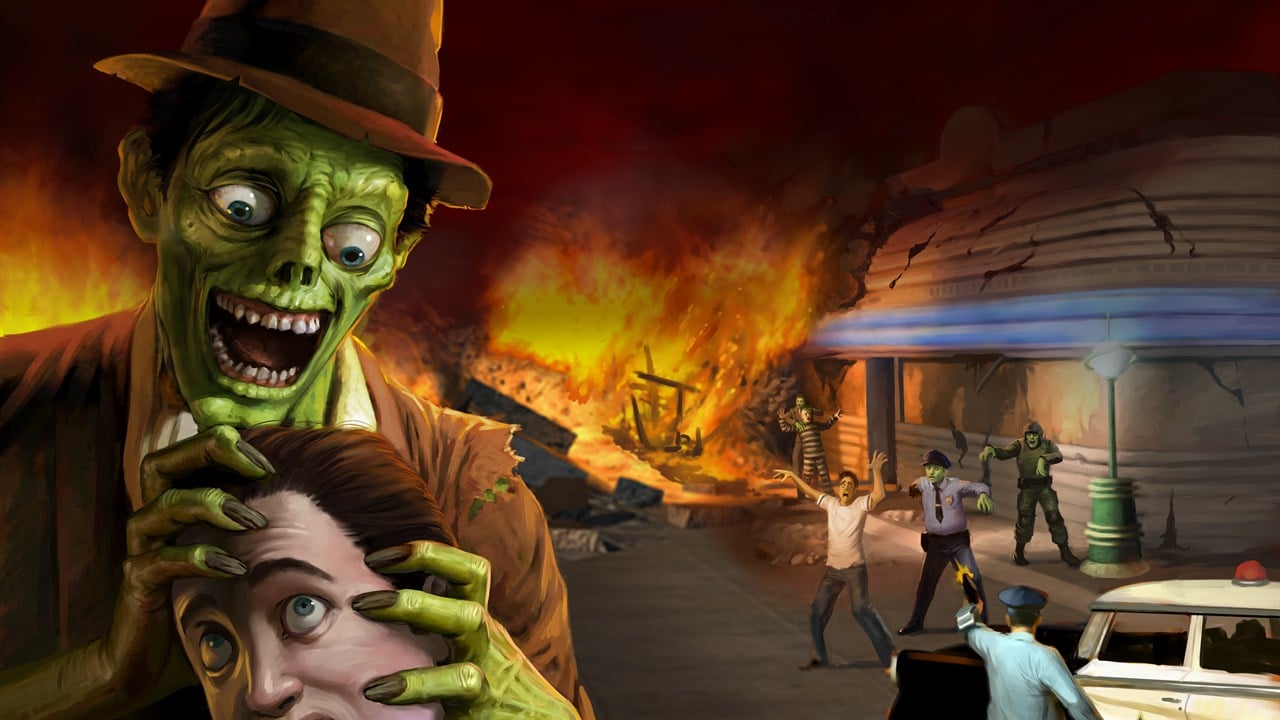 The idea of a second chance at life has a certain appeal. What could be done differently? Would the same choices be made, or could a different result be achieved by approaching things from a different angle? Could a cult classic become something more appealing, given a few more years to marinate? Stubbs the Zombie in Rebel Without a Pulse, a game from 2005 given the Aspyr treatment and released on Nintendo Switch and elsewhere this week, prefers to stick to its roots. Packed full of great gameplay ideas, questionable satire, and unfortunate jank, this arcade-style zombie eat-’em-up is a decent revival of a long-dormant property.

2005 was a turning point year for video games. The year marked the birth of God of War, the return of the Kingdom Hearts and Resident Evil franchises, and the release of several unremarkable licensed games like Batman Begins and Fantastic Four. But this was also the year of Destroy All Humans, and, whether intentionally or not, Stubbs the Zombie is playing in the same sandbox. The retro-futuristic town of Punchbowl, PA has an unwelcome visitor in the form of Stubbs, a violent zombie who bursts out of the ground with a lit cigarette and an insatiable appetite. A snappy dresser whose fashion sense is unfortunately undercut by the guts spilling out of his side, Stubbs’ motivation seems unfathomable. For reasons that don’t become clear for a few levels, Stubbs lays siege to Punchbowl and the surrounding areas, chomping brains and flinging rotting viscera at anyone and anything that stands in his way.

The strength and appeal of Stubbs is undoubtedly its gameplay. Though there are some flaws baked into the design, such as a lack of a minimap or clear objectives, the moment-to-moment third-person action of shambling through the streets and snacking on citizens is undeniably fun. Stubbs himself moves quickly, eschewing the notion that all zombies are slow-walkers. Every time Stubbs chomps an enemy to death, they return as another zombie under his thrall. It’s a gleeful, gory good time to chew through a shopping mall and amass a horde of one’s own. Stubbs can even direct his minions to an extent, shoving them towards armed enemies for a quick distraction or wolf-whistling them to his own location if he needs backup. It feels inventive, even now, and it’s easy to see why this game caught on to the extent it did on its original release.

As Stubbs moves through twelve levels, the game constantly throws the player new mechanics to master. Rather than simply build out a zombie army, Stubbs gains access to a whole suite of abilities. He can eventually possess his enemies via a scrambly detachable arm, stun groups with a mighty fart, and blow up entire backup squads by bowling his own exploding head at them. On top of that, he can drive vehicles, including a hilariously deadly tractor covered in farm implements that impale anyone unlucky enough to get caught in its path. There is plenty of reason to keep playing, if only to discover the next sadistically gross thing the developers came up with. To this day, Stubbs the Zombie is the only game where an end-level objective involves contaminating a town’s water supply with radioactive undead urine.

The humor and satirical elements of Stubbs are hit-or-miss. There’s a slapstick sense of humor on display, notably when Stubbs rips off an enemy’s arm. They’ll wail and scream and cry in terror, and usually end up saying something like, “No! How will I juggle?” just before getting eaten by surrounding zombies. It’s funny the first time, less so the fiftieth. Between levels, black-and-white news broadcasts attempt to assure the public that everything is under control, even as the footage shown reveals the truth. The story of Stubbs and Punchbowl isn’t exactly compelling, and can best be summed up the same way an NPC police officer does: “Make it snappy, we’re in the middle of a zombie holocaust.”

For better and worse, this is a perfectly faithful port. Aspyr has given Stubbs a fresh coat of paint, but nothing about the game’s design or levels has been altered. It can be occasionally frustrating, especially for those with zero nostalgia for this title, to be wandering a level, unsure of where to go (or who to eat) next. There is no minimap, only mayhem. There are no quest markers, just vaguely articulated goals. The UI occasionally feels antiquated, and though checkpointing is frequent and generous, that doesn’t make certain areas any more thoughtfully designed.

Take The Sacking of Punchbowl, the game’s ninth stage. Around halfway through the level, the player is tasked with navigating the streets as the military tries to stop the advances of the ever-growing zombie hoard. The ground is littered with landmines that will kill Stubbs or his zombies instantly if stumbled upon. To finish the section, the player must have a sizable group of zombies to tear down a barricade. However, nowhere in the level does the game express this. It’s entirely possible to make it to the end of the stage with just Stubbs himself, and no way to create new zombies because every other nearby enemy has been killed. Reloading a checkpoint doesn’t work because the game has already autosaved, and so the player may have to restart the entire stage, now armed with the knowledge of how to breach this particular barrier. It’s not exactly a deal-breaker, but one example of a frustrating holdover from a time when developers were learning how to wring the most out of consoles while still creating fun and interesting games.

Playing Stubbs on modern consoles takes some of the sting out of the experience. It’s easy to overlook a little jank when the novelty of playing in handheld mode on Switch still feels fresh. Aspyr has made the experience of playing Stubbs smoother and simpler, with extremely rapid load times and a smooth, reliable framerate.

Ultimately, Stubbs the Zombie exudes exuberance, with its surf-rock guitar soundtrack and grinningly ghoulish violence. The game manages to strike a tone that is both horrifying and laugh-out-loud funny, though the repetition of soundbites and gameplay may eventually become grating. Stubbs is a wonderful example of a game that deserves a look, and Aspyr deserves praise for giving a cult classic a revivifying jolt. It’s not for everyone, but for those who grew up playing games in the early days of the Xbox and PlayStation 2 and miss the charm that retro 3D games deliver, Stubbs the Zombie in Rebel Without a Pulse will scratch that itch.

Stubbs the Zombie in Rebel Without a Pulse is available now on Nintendo Switch, Xbox, Steam and GOG, and PlayStation.