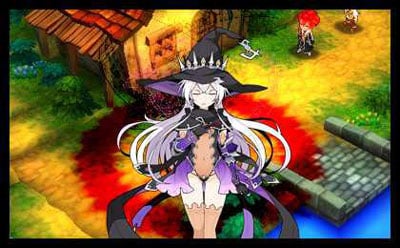 Fans of Fire Emblem on the 3DS are surely experiencing massive tactical RPG withdrawal symptoms as they eagerly await Fates to hit shelves sometime next year. Fortunately, Imageepoch with the help of Atlus and Sega brings us Stella Glow, their last hurrah in the video game industry, to quell our strategy battle needs.

Stella Glow is a story-driven tactical RPG along the lines of Final Fantasy Tactics but with an affinity system along the same vein of Fire Emblem Awakening albeit much more simplified. The story is a generic anime plot which smoothly moves the game forward from battle to battle. The game starts off with Alto and Lisette, two close friends who lose their entire village, family, and friends when a witch named Hilda decides to crystalize their home. They join forces with the Royal Army, a group of quirky yet loyal men who have vowed to protect the kingdom and their queen, to stop the new menace. It’s up to our heroes to find three other witches and have them sing to rid the world of Hilda’s crystals. It’s not a deep or riveting tale but the interactions between the characters give the game its charm and help the player through the sometimes long-winded dialogue scenes, and these scenes do take up more than their fair share of playtime. In fact, it takes about two hours to get started in the game amidst the tutorials and the dialogue scenes. Even afterwards, cutscenes will remain consistently prevalent throughout the playthrough.

This isn’t to say that these dialogue scenes are a waste however. There are some genuinely charming aspects between each of the characters and many humorous situations to stem from them. While the story is mediocre and generic, the characters are what really drive the game as a whole. And as they should, as a decent amount of playtime is put into gaining abilities from building relationships between Alto and his teammates.

The whole game is divided into two sections, free time and mission time. During free time, Alto is free to explore the capital city, Lambert, (well not really explore it freely but rather pick where you want to go and have the background change to that scene). Alto can buy weapons, refine orbs which augment acquired weapons, do jobs for store keepers or hang out and build relationships with teammates. Alto has time for only three tasks per allotted free time so choose wisely about how you’d like to expand your gameplay experience.

Doing jobs for shopkeepers will earn you extra money as well as gain an affinity for that particular store which opens up the possibility of price drops on their wares. Hanging out with teammates will build Alto’s affinity toward them, unlocking abilities in the battlefield such as giving adjacently spaced allies buffs. If those don’t interest you, there’s an option to leave Lambert and explore the wilderness in search for various weapons. Keep in mind that none of these tasks require any actual gameplay, just pick something to do and it will initiate a dialogue scene and then the task will be done. It is such wasted gameplay potential and just reinforces how dominating the story is to the game.

After the free time is over, the game will roll into mission time which brings actual battles and story progression. The battles are in typical tactical RPG style with nothing drastically new brought to the table. There’s not much wrong with the system and it makes itself a great starter for players new to the genre.Stella Glow‘s main gimmick is conducting the different witches’ singing using Alto. By attacking and killing enemies, a meter fills up which allows for the witches to sing, causing damage to a large portion of the battlefield.  Building the meter up to four times will allow Alto to conduct one of the witches into casting major status effects on the battlefield such as making the enemies unable to attack. There are a few drawbacks in the battle systems, however. The A.I. can be detrimental to the mission at hand. They have no problem running headlong into enemy territory even when the objective is to keep them alive. Enemy A.I. is relentless too, as they will go out of their way to gang up on one of your allies until they’ve successfully dispatched them. At times, you might have to go out of your way to block the movements of VIP allies so they don’t enter into treacherous waters or at the very least keep a healer on them and hope they don’t get slaughtered before you can cast a spell.

Some battle arenas are frustratingly designed with narrow pathways. With so many allies and enemies on the battlefield at a time, trying to cross narrow passageways to get to an enemy or a boss will, more often than not, bring about a Three Stooges door frame occurrence with your teammates, allowing for only one character to have a clear shot of an enemy at a time. Don’t worry because most arenas offer wide open areas with differing environmental tiles used to determine movement.

Battling is by far the most engaging aspect of Stella Glow. It does become apparent, however, that the game is aware of how much of a standard experience the battle system is since they injected a majority of the playthrough with story and characterization. This helps to fill out parts of the game that would fall flat otherwise even if it doesn’t seem like these aspects are fairly balanced.

Stella Glow offers a solid tactical RPG experience with relationship building side quests. The high production is evident in the game with its great deal of voiced dialogue and original JPOP compositions. The heavy emphasis on its story will deter more experienced players of the genre but it serves as a welcoming experience for those wanting to get their feet wet before taking on much more in-depth tactical RPGs.