Picking up local multiplayer-focused games can be a gamble. If you have a reliable group of friends that love to get together often and play, it might seem like a no-brainer. On the other hand, what if you enjoy a game’s mechanics so much that you to keep playing after they leave? Offering a decent experience for when other people aren’t around is what can separate good local multiplayer games from stellar ones. SpiritSphere DX is caught somewhere in the middle.

SpiritSphere DX’s core gameplay is essentially top-down tennis using weapons instead of rackets. Each of the eight playable characters has unique stats, weapon types and abilities that end up drastically changing up the gameplay. From the dark and mysterious Ozo’s ability to transport across the court in an instant to the adorable Kao having two animals follow behind him and deflect incoming orbs, there’s a good deal of variety here. The characters themselves get fleshed out a bit via charming character-specific dialogue and endings during the game’s campaign as well.

I personally fell in love with Buster, the carefree cat who can outrun everyone.

If it were just a variety of pixelated characters playing tennis with weapons, though, that might grow old rather quickly. Luckily, Eendhoorn went above and beyond when designing the different types of spheres players can mess around with. The game’s 12 different spheres (some of which have to be unlocked) run the gambit from a Ghost Sphere that can only be tracked by its shadow to an Item Sphere that randomly drops a range of usable items (stationary shields, potions that make characters grow larger, etc.). These combined with stages that, while few, each significantly changes up the strategy for every match, and you have the stage set for tons of fun and varied multiplayer bouts.

But what else is there to enjoy in SpiritSphere DX aside from the standard Regular Mode? What else can you expect for the low price of admission?

The game’s meatiest offering is a campaign mode that calls to mind a mix of the ones found in Super Smash Bros. and old school Soulcalibur games. Players will go through 7 or so matches broken up by quick rounds of target practice, frisbee, and squash. Every stage, sphere, and opponent is randomized aside from the punishingly-difficult final boss. With every win you earn a corresponding number of coins that can be used to unlock different spheres and character colors. For some strange reason, though, the mode is set up to where you lose coins every time you lose a match. This created scenarios where I’d encounter a particularly tough opponent-sphere-stage combination and lose hundreds of coins trying to progress. Even worse, your total number of coins follows you throughout all the game modes. If you’ve saved up 3,000 coins over the course of a few playthroughs, better get ready to risk them all every time you start a new campaign.

This guy. I hate this guy.

Aside from Boss Mode, all other modes offered are standalone versions of challenges found in the campaign or Regular Mode. SpiritSphere DX’s simple take on squash surprised me by being just as enjoyable as the core game, and Target Mode ended up feeling a bit boring during the campaign but really fun when cooperating with a friend. Practice Mode teaches you the basics, though it’s slight enough that players would be better off just jumping into a match and learning organically. And the highly touted Hand2Hand Mode (2 players turning the Switch and holding opposite ends) works as well as advertised and is pretty impressive from a design standpoint, but isn’t quite as comfortable as just handing a Joy-Con to a pal.

There’s a lot to love about the core gameplay here. However, there are also a few missteps. For some reason you can’t pause or back out of Practice Mode; either you play through the whole thing or close the game. The Spirit Fountain, where you redeem your coins for unlockable spheres and character color variations, has a frustrating duplicate system that makes unlocking things feel gacha-esque (though there are no microtransactions, of course).

This same system exasperates an issue with the Fountain that causes any player who spends more than 600 coins in a row to start getting the same 4-5 duplicate unlocks unless they back out and try again. The unlocks themselves even feel a bit lackluster; unlocking spheres for multiplayer is cool, but different sprite colors is hardly enough motivation to struggle with the Fountain. 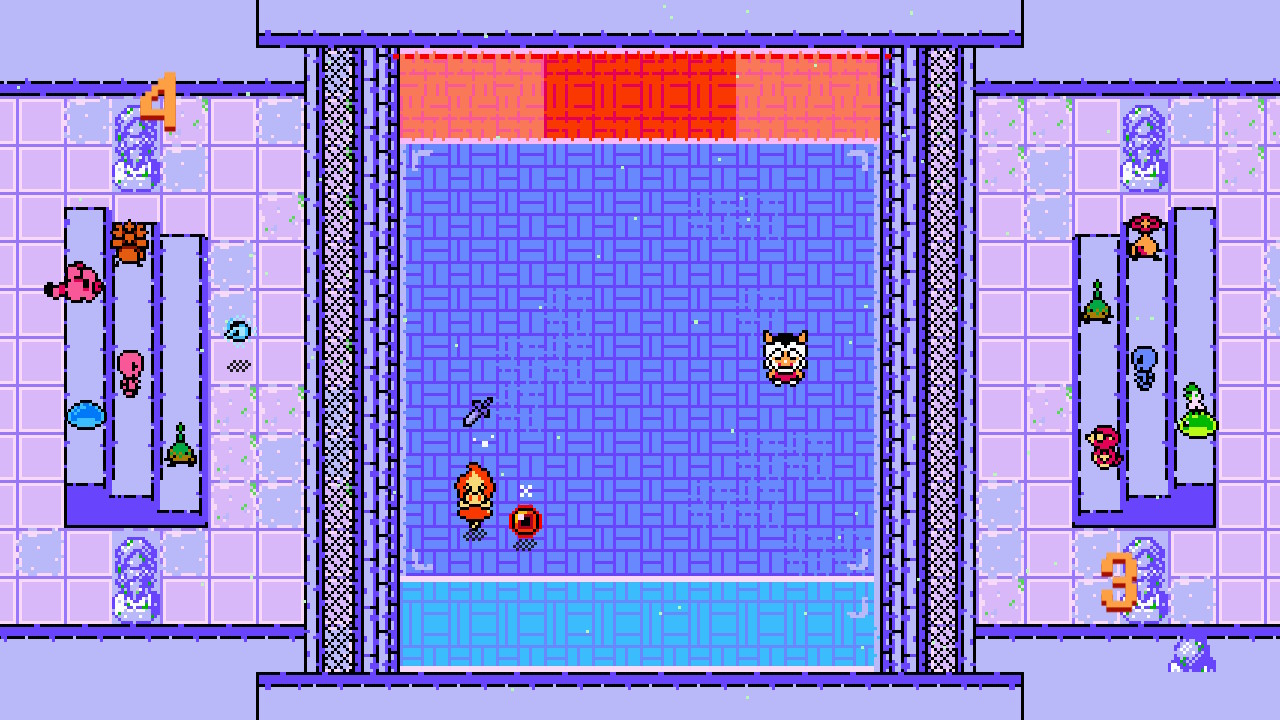 SpiritSphere DX is a good game. Its colorful cast of characters and catchy, earworm soundtrack are all-around inviting and pleasant. The core gameplay (and, for my money, the addicting Squash Mode) is fun alone or with a friend. On the other hand, it’s bogged down bya couple quality of life issues and a lack of content and incentives for when everyone’s gone home. Nevertheless, if you’ve got a good local friend and a spare $10, it’s tough not to recommend this as one of the better local multiplayer games on the Switch. Just be sure to temper your expectations before jumping in.