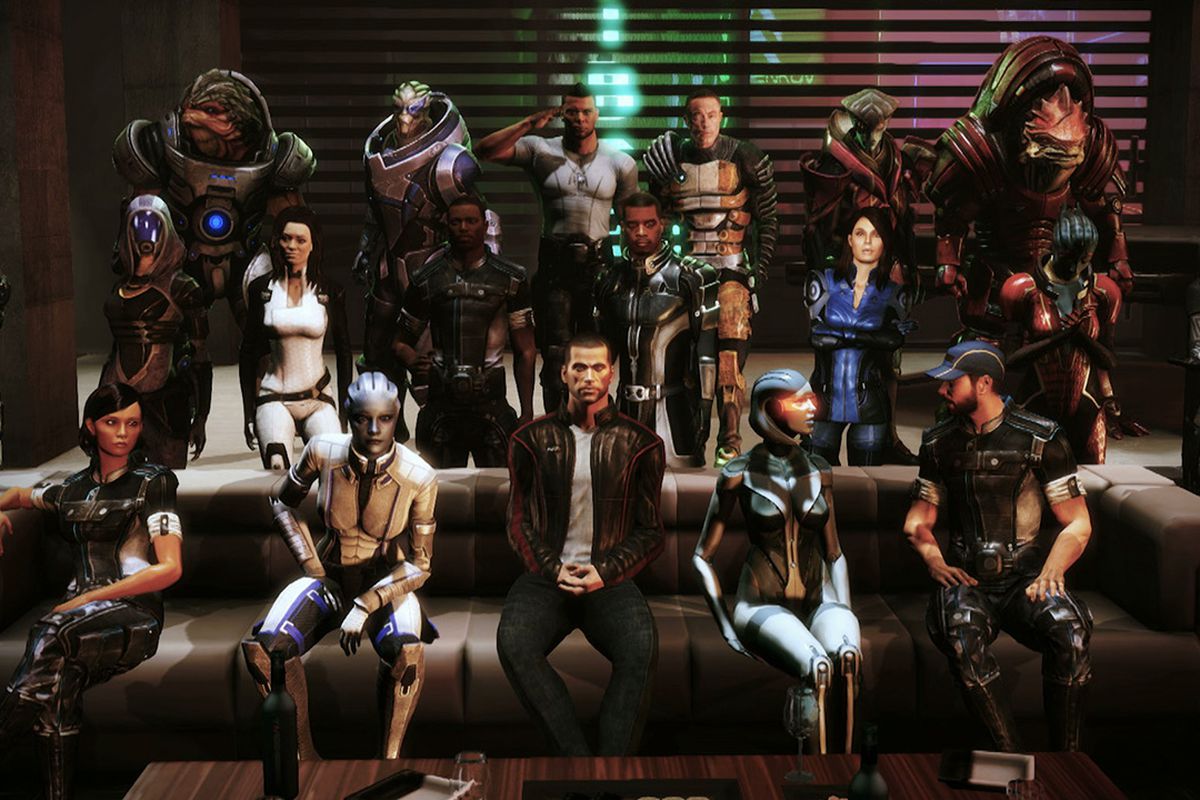 There’s no getting around it. Mass Effect: Andromeda was a massive disappointment. Not that we didn’t see it coming.

Long before release day dawned alarm bells were ringing throughout the gaming community as lacklustre gameplay demos and early access trials were followed by reports of internal strife at developer BioWare and, tellingly, last-minute review embargos.

Inevitably, when fans finally got their hands on the game after an interminable 5-year development process, these fears were confirmed.

Alongside the jarringly poor facial animations that would have been considered laughable last generation, Andromeda was riddled with a slew of glitches ranging from the mildly irritating to the downright frustrating, mediocre writing that not even the acting talents of Natalie Dormer and co. could conceal, and a small yet perceptible feeling of déjà vu overshadowing the entire experience.

But here’s the thing. Buried beneath all the issues and bad design choices lies an at least moderately enjoyable game that, more importantly, clearly demonstrates the series still has plenty left to offer.

It’s this latent potential that makes publisher EA’s decision to shelve the series and refocus its attention elsewhere so frustrating and, ultimately, unnecessary.

First and foremost, irrespective of the clunky, at times cheesy dialogue, the main narrative is actually quite compelling if not wholly original. The concept of a handful of Human, Krogan, Asari, Turian, and Salarian pioneers traveling across the unimaginably vast inter-galactic void in a last-ditch effort to flee the Reaper-besieged Milky Way galaxy and safeguard their species is genuinely interesting, allowing BioWare to introduce new ideas and story scenarios in a natural, believable way that provides an ideal foundation on which to build future titles, whilst retaining a connection to Andromeda’s venerable predecessors.

It has to be said the central conflict between these intrepid emigrants and the antagonistic Kett, whom they encounter almost immediately after they arrive in the Andromeda Galaxy, is rather prosaic. However, other aspects of the plot, the mysterious origins of the ubiquitous robotic race known as the Remnant and the Scourge phenomenon in particular, provide plenty of narrative depth and generate a very real sense of intrigue. Especially as precious little is revealed about either the Remnant or the Scourge during the course of the adventure as BioWare was evidently reserving specific details for the now suspended sequels.

In terms of new characters, while protagonist Scott/Sara Ryder’s typically rag-tag paramilitary squad is undeniably weaker than Commander Shepard’s, capricious Asari scientist Peebee, roguish Turian Vetra, and Angaran resistance member Jaal are 3 at least that can withstand comparison to the beloved heroes of past titles: Garrus, Liara, Tali, and Wrex. A particularly impressive achievement given the questionable script. Look no further than the horrendous, tone-deaf dialogue written for transgender quest-giver Hainly Abrams which was so bad BioWare had to publicly apologise and update the character to appease outraged players.

The world building, on the other hand, is immaculate. The Angara – a vaguely squid-like mammalian species indigenous to the Heleus Cluster – are designed with the same loving care and attention to detail that makes Mass Effect’s alien races comfortably superior in terms of scientific plausibility to those featured in Star Wars or Star Trek. Complete with a well-thought-out backstory, culture, and history, they feel wholly distinctive from the series’ pre-existing roster of intelligent species.

Similarly, there are a number of diverse factions that help enrich the world of Andromeda in much the same way as the Templar-Mage conflict or the Quarian-Geth war do in the Dragon Age and original Mass Effect trilogies respectively. Thus, far from a band of self-serving mercenaries intent upon pillaging and mayhem, the Outcasts are portrayed as a group of disillusioned settlers who have essentially been forced into a life of exile as a result of the Andromeda Initiative hierarchy ignoring their valid complaints; the Roekaar as an insular tribe of long-suffering Angara who, rightly or wrongly, believe the only way to save their beleaguered people is to resist all invaders: Kett and Human alike. To put it simply, each and every group gives off the impression that it’s comprised of real individuals who react plausibly to the situations they find themselves in; people who have goals and motivations of their own.

Even the core gameplay mechanics, for all the glitches and arguably repetitive side-quests, contain some interesting concepts and enjoyable systems that make playing the game actually quite an enjoyable experience.

Combat, in particular, is far more fluid and fast-paced than any of the previous 3 titles, thanks in no small part to the introduction of the jump jet; a revolutionary piece of kit that increases the number of tactical options available during combat and makes navigating the game’s relatively small number of semi-open world environments much simpler when traveling on foot.

The comprehensive, free-form skill tree that no longer locks abilities into specific classes and a large arsenal of weapons, meanwhile, offers a far greater amount of freedom when it comes to character progression. Players can create their own, ideal version of space-commando/alien-wooing lothario Ryder, ensuring he/she matches their preferred play style as closely as possible.

So robust are the combat mechanics, in fact, the generally dull and repetitive multiplayer mode becomes a reasonably enticing prospect once the main campaign is done and dusted.

Obviously, some will debate the quality of the things mentioned above and claim Andromeda’s problems run deeper. Still, even if Andromeda was as bad as some have suggested, and even if it wasn’t as commercially successful as it apparently was, gaming history is littered with examples of publicly-acclaimed sequels to underwhelming titles, which signify just how unwise EA was to pull the trigger so rashly.

For instance, prior to Final Fantasy XV, series fans had to endure years of forgettable releases in the Final Fantasy XIII trilogy before Square Enix finally recaptured some of the magic of Final Fantasy’s golden era (VI–IX). True, they all sold well, were well-received in Japan, and, unlike Andromeda, weren’t plagued by bugs, but nevertheless, for many fans, these 3 titles mark the nadir of the beloved JRPG series. A trio of games that are full to bursting with grating characters and utterly perplexing storylines, not to mention tedious gameplay mechanics that impede rather than advance the franchise.

Then there’s Resident Evil VII: Biohazard: a triumphant return to form that abandoned the action-heavy focus of Resi V and VI in favor of the traditional, claustrophobic horror that personified those classic early games and made it into the globally-recognized franchise it is today.

When looked at from this perspective, it makes EA’s response to the whole situation so much more exasperating.

Despite the fact that it was EA’s decision to leave development duties in the hands of BioWare Montreal – a largely unproven team who, it’s only fair to say, did the best they could under testing circumstances – and then stick to the March release date despite the game’s painfully obvious shortcomings. All so it could redirect its attention towards other projects, most notably Anthem.

Now, video game development is a business, so it’s easy to understand why EA would invest more aggressively in a new IP that offers the promise of tapping the shared-open-world market, rather than an established one that already has a substantial player base; particularly as this popularity would almost guarantee commercial success, irrespective of the actual quality of the finished article. All the same, it’s not as if EA is a struggling indie developer that simply can’t afford to take a gamble on a game that would severely weaken its position within the industry if it flops. Surely highly profitable series like Battlefield, FIFA, and Star Wars Battlefront give EA the necessary financial cushion to devote a more than adequate amount of time and effort into making sure its games meet fan expectations.

Alas, EA would rather take the easy way out and put Mass Effect on ice, possibly canceling Andromeda’s scheduled DLC in the process, rather than admitting fault or trying to rectify the situation, treating it like an aging sportsman who’s no longer capable of competing at the highest level and, despite years of loyal service, must therefore be let go for the good of the team.

An incredibly short-sighted decision that threatens to leave Mass Effect’s potential unfulfilled and, worst of all, raises a big middle-finger to the fans who’ve steadfastly supported the series over the last 10 years.