Over the past year and a half, we’ve seen three major Japanese game series re-invent themselves for a western audience. For example, Konami’s Metal Gear Solid V abandoned the story-focused, hyper-linear structure of the previous games in the series, and received great critical acclaim from the west. However, some longtime fans were left unsatisfied. Similarly, Square Enix’s Final Fantasy XV had a change in focus; the new, typically western open-world structure of XV trumps the half-baked story. Considering storytelling is a large part of the Final Fantasy series, it’s no surprise that critical praise was not enough for many wounded fans. This brings us to Resident Evil, a third-person survival horror series that just launched its 7th installment. Much like MGS and FF before it, Resident Evil 7: Biohazard adopts the first-person perspective and ditches the action focus of the latest series installments. Thankfully, in globalizing their design, Capcom succeeds where Konami and Square Enix failed. Resident Evil 7 finds a new identity for the series that will certainly delight new players, yet also keeps that Resident Evil magic to please longtime fans.

Players find themselves as Ethan Winters, who, on a quest to find his lost wife Mia, explores the “haunted” Baker ranch in Dulsey, Louisiana. In this nightmare, Ethan must sneak, fight, and explore his way out of many frying pans into far worse fires. Without spoiling too much, learning about what happened to the Bakers and where Mia is wonderfully tied into the rest of the series. Rest assured, the story has a satisfying conclusion, leaving only the loose ends it intends to.

On the gameplay front, all the Resident Evil tropes come to play: you’ll breathe easier in save rooms, panic about missing shots due to ammo scarcity, and hit yourself every time you get hurt, because you’re out of the classic healing Herbs. On the horror side, the game focuses more on establishing tension rather than on jump-scares or terrifying imagery. To be clear, there are plenty of jump-scares, but it’s no comparison to the extreme panic when one of the Bakers is hot on your tail. Or that pit in your stomach before you open the door, fearing Jack might hear you.

Now, to escape Jack, Ethan must sneak quite a bit, because the nigh-immortal Bakers aren’t really worried about his boomstick; Jack even remarks “That gun ain’t gonna work like you think it will.” These stealth sections focus more on cutting off the Bakers, leaving them behind doors as you make a break for the shadows, hopefully ending their pursuit. It’s an odd way of doing stealth, but players will freak out when a Baker sees them, and they’ll also know how to get away. In other words, it’s a serviceable way to induce horror without being overwhelming. That being said, it can be annoying when Jack or Marguerite won’t leave the room where you need to go. 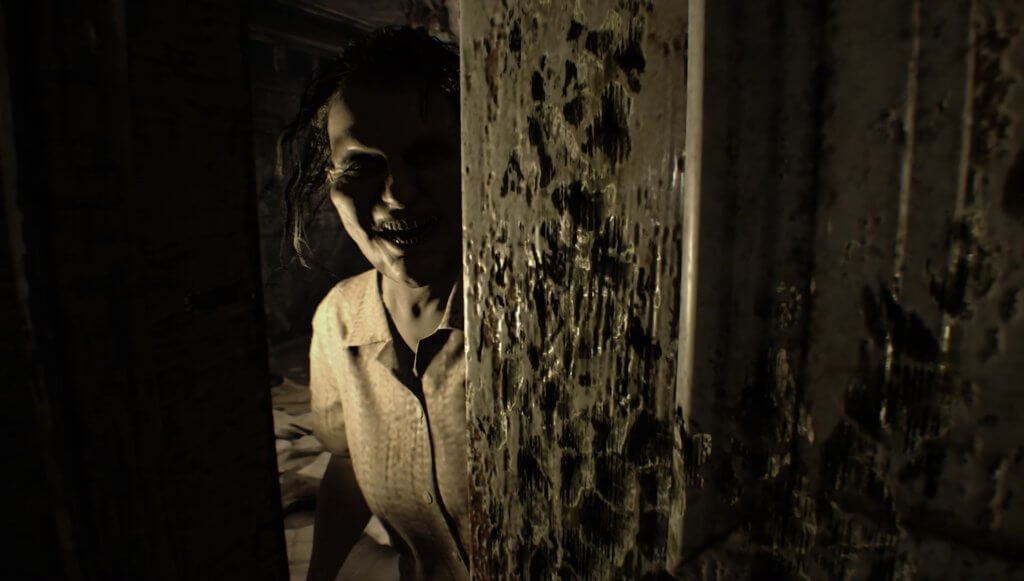 The combat is a bit of a mixed bag. Inventory-wise, items are strewn about just enough to keep you healthy, yet terrified of missing shots or taking a hit mistakenly. It’s a near perfect balance of scarcity and mercy, which makes the disappointing gunplay a real tragedy. First, I want to state that the controls are fine, and the combat is certainly fun at times, but it is also the worst part of a very good game. For starters, the Morphlings (the most common enemy) in Resident Evil 7 clearly learned the five D’s of Dodgeball from Patches O’Houlihan – as they ‘Dodge, Duck, Dip, Dive and Dodge’ their way around your reticle, you’ll find yourself constantly missing shots. Sure, these unnatural movements serve to make the enemies somewhat unsettling, but considering how they all have rather high health, their constant spazzing and your lack of ammo makes them into an annoyance. The most notable addition to gameplay is the “L1 to Guard” function, which serves to reduce damage taken. It’s an odd move in a first-person game; depending on the attack, guarding can range from reducing the damage minimally to reducing damage by up to (seemingly) 90%. I mention it because it’s an interesting mechanic, but unfortunately, only becomes truly important once or twice in the game. 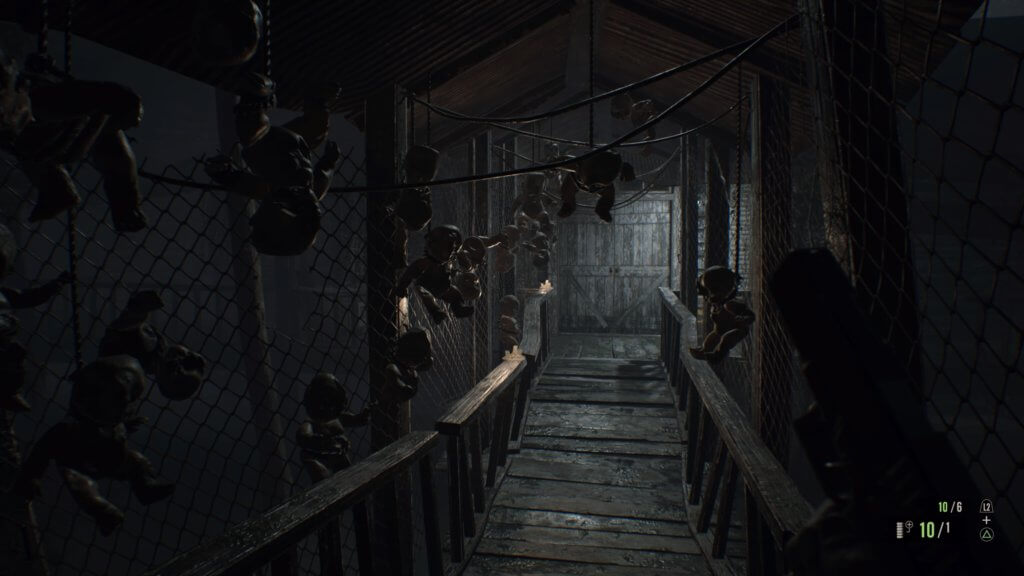 Now, the boss battles might have saved the combat, but most of the fights are uninteresting, and drag on for too long. The strongest encounters involve you finding items around the room to puzzle out a way to defeat the boss, but these fights are few and far between. Most of the boss battles boil down to a bullet-sponge ammo dump, but the solid controls and atmosphere keep it fun. In all, the combat controls well, and is fun, but the enemy design is a serious letdown.

Exploration is where this game shines. Much like the original Resident Evil, RE7 takes place within one large, intricate map. There are various keys of many shapes and sizes hidden around the gorgeously rendered Baker estate, and players will be giddy to find keys to locked doors, slowly filling out the map. The settings are varied, and each section has its own personal flair, much like previous games in the series. It’s this return to form that truly makes Resident Evil 7 work. When the combat stumbles, the stealth keeps it tense, and the exploration keeps it interesting. From the beginning, you want to know more about what happened to the Bakers, and for that, you’ll have to explore, finding bits and pieces of enticing info strewn about. While hunting these items, the creaks and cracks keep players on their toes, always ready for the next jump-scare, and that’s where I found the most joy in the game. Just finding the next clue, or key, or item – having to explore this wonderfully varied estate, praying that Marguerite and her militant mosquitos didn’t hear me break that bobblehead.

The Bakers aren’t the cleanest family

Overall, Resident Evil 7: Biohazard clearly stands as a solid addition to an important series in gaming history. No, it’s not a revolution in game design, it’s more of a clinic in old-school level design. This is never more evident than when you finish a section; players leave just enough unexplored when they leave a section to head back into hell once they find a matching key. Capcom’s arguably bold move to first person and a more personal setting actually does little to harm the old RE formula, and in fact, only heightens the scare factor. Surely, there are some gameplay disappointments, but players will forget these hang-ups as they find that next clue, snort that sweet chem fluid, and move one step closer to escaping that nightmare.

Joseph Ulfsrud is a stupid sasquatch man who graduated from UTD with a bachelor’s degree in Game Design. He games. @bigjoeu