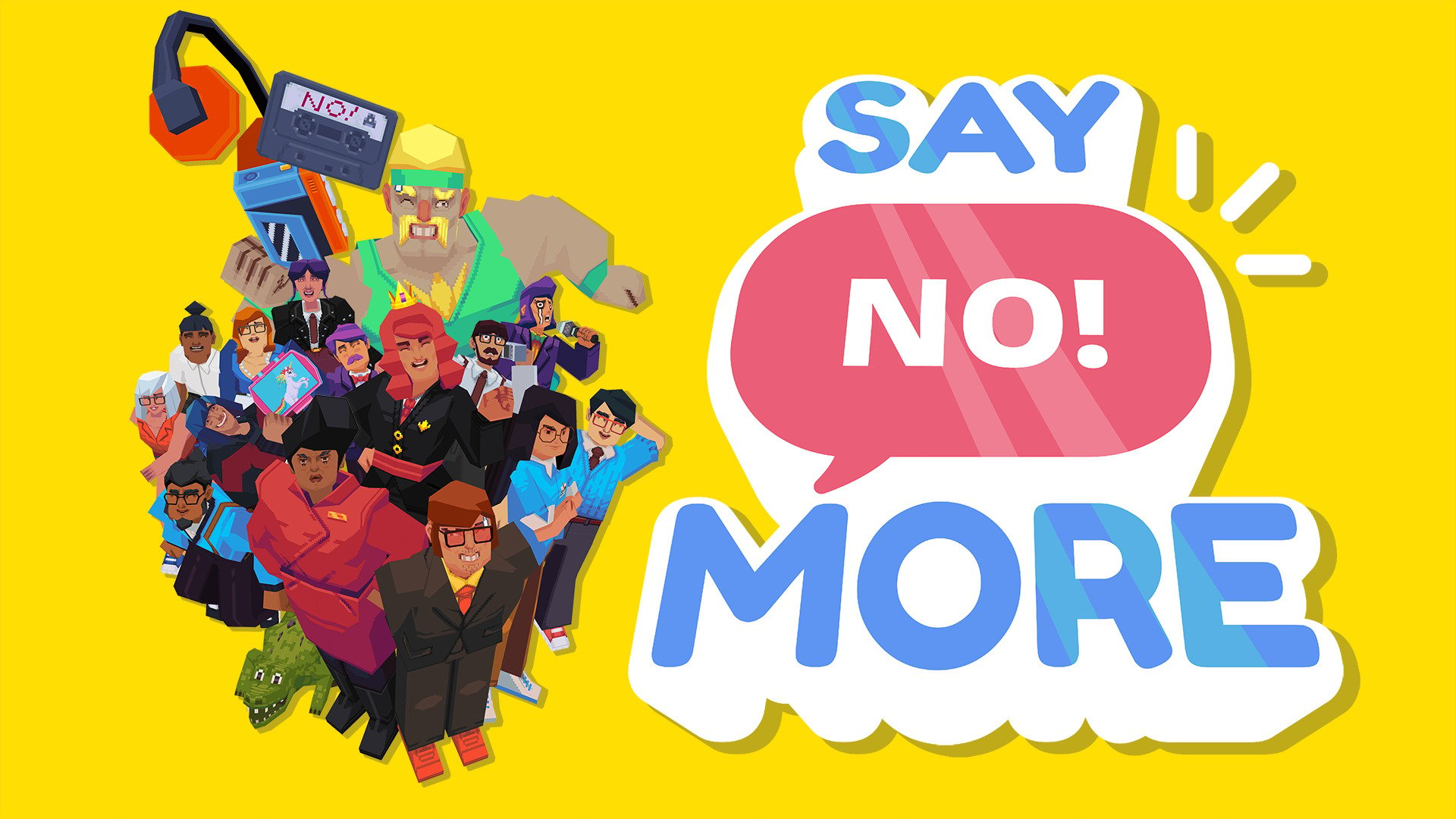 Anyone who has ever been a student, freelancer, or budding professional will know the grind all too well: the pressure to say “Yes” to any opportunity that comes your way. No matter how menial, degrading, or exhausting the position may be, the system seems to say that any experience can build your resume, expand your network, or grow your portfolio. But against this grim backdrop, Say No! More poses a simple yet shocking question: what if you said “No” to these opportunities instead?

Say No! More, developed by Studio Fizbin and published by SteamWorld label Thunderful Games, offers a comedic take on the capitalist culture of overachievement. Its main idea is simple: there is incredible power in the simple act of saying “no.” It starts as a slapstick fever dream about the internship experience, but by the time the credits roll, it turns into a powerful message about individualism in the face of an overwhelming corporate machine that seeks to churn out submissive professionals.

There are also lots of puns, motivational speakers on cassette recordings, humanoid alligators, and spontaneous staring contests. It’s a weird game, but it works in its own strange way as a silly and cinematic romp.

Say No! More can best be described as a playable sitcom. After going through an impressively versatile character creator, players assume the role of a student starting the first day of their new internship at a massive corporation. You’re almost immediately assailed with outrageous demands as soon as you enter your new workplace: employees hound you to copy their papers, make their coffee, throw out their trash, and so much more. It’s not long before even your supervisor steals your lunchbox. However, just when things feel like they couldn’t get any drearier, a chance encounter with an old cassette recording bestows upon you the fantastical ability to say no to any and all requests you receive.

In a corporation dominated by slavish office dwellers who can only say “Yes,” the intern’s ability to turn down work and refuse commands soon makes waves. What ensues is a comprehensive takedown of the entire business organization, starting with the departmental managers and ending in epic showdowns with the full board of directors–all accomplished by endlessly saying “No,” turning the professional world on its head through constant negative persistence.

Relentlessly silly from beginning to end, Say No! More’s story accomplishes what few comedy-focused games achieve: frequent genuinely funny moments. The characters are so zany, the situations so bizarre, and the punchlines so simple (just say “No,” no matter what) that it’s constantly delightful to see what strange characters and situations are coming next. You never know whether your next encoutner will be with a demanding employee asking for coffee, a malfunctioning security robot, or an acolyte of a staring-contest-themed cult. It never lets up in dialing up the absurdity, as saying “No” can send your coworkers flying through windows, knocking down walls, and destroying buildings. Such a simple concept as this has the risk of losing its novelty before long, but the game’s sheer variety of bizarre characters and situations rarely fails to elicit a chuckle or two.

Most importantly, the game doesn’t rely solely on the comedic potential of its main idea. Instead, it consistently makes the most of its concept, eventually showing that the act of saying no can have surprisingly positive impacts. It gleefully tears down conventional office culture, poking fun at the world of “synergy meetings,” “innovation rooms,” and “team-building exercises” and showing that saying “No” every now and again can yield beneficial results. Indeed, some of the best parts of the game occur during its most wholesome moments, where players use the power of “No” for good causes. Feeling insecure in your sense of humor? Say no to the doubters. Not excited about attending a party in the evening? Say no to the invitation. What starts as a funny little novelty game eventually develops into something so much more than that. Maybe there are a few repetitive situations–I lost track of how many times I was told to make coffee or copy papers for other employees, which might be a joke in itself–but overall, the game uses its heartfelt silliness for a good cause, creating an experience that is by turns funny yet impactful.

Its lighthearted nature is made all the more delightful through the game’s blocky and colorful visual style. Characters come in all shapes, sizes, and styles, from mundane to outlandish. They’re all brought to life with charming, sometimes comedic voice acting–there are more than a few characters whose conversations amount to little more than inhuman squeaking, which wonderfully parallels the squabbling so often associated with corporate culture. The bouncy synth-driven soundtrack continues to keep things light on top of that, making the game an aesthetic and narrative treat all the way through its brief, roughly three-hour runtime.

It’s a good thing that the story is so effective, because it’s largely all that Say No! More has to engage players. The moment-to-moment gameplay is very hands-off–oftentimes, literally. Say No! More bills itself as an NPG (“No-Playing Game”), a title that is more than fitting in several ways. It’s effectively a one-button game, where that one button is solely dedicated to refusing every other character’s requests. There are a handful of other activities that can be performed, such as changing your tone, sarcastically clapping while someone else is speaking, or using a powerful supercharged “No,” but overall, you’re simply moved on rails from one encounter to the next. The only thing that varies is whether you want to say “No” immediately or wait for a few seconds. It is perhaps akin to a visual novel, but without the ability to make many meaningful choices like in your typical VN, it lacks even that genre’s level of interactivity.

With such a minimalist gameplay loop, perhaps it’s no wonder that Say No! More is also available on mobile devices in addition to PC and Nintendo Switch. While it’s understandable that Fizbin wanted to focus more on the humor and storytelling than the moment-to-moment gameplay, it’s nonetheless disappointing that the gameplay wasn’t fleshed out just a bit more. The game’s commitment to its main idea is admirable from a conceptual standpoint, but perhaps it would have made the gameplay a bit more engaging if there had been some situations where players had to decide between saying yes or no. As it is now, it’s a relentless no ’em up where you’ll be mashing the No button more often than not. The story makes up for its gameplay (or lack thereof), but it’s nonetheless disappointing to see a game that doesn’t make the most of its potential.

Even then, Say No! More excels because of its commitment to an equally fanciful yet empowering concept. It’s a fun cinematic kind of experience that’s sure to provide some laughs for any audience, but for anyone who’s experienced burnout or work overload, its message of knowing your limits and refusing to overwork yourself is especially powerful. Its gameplay might verge on the nonexistent, but its heartfelt story and distinctive presentation ultimately make it a memorable experience that’s sure to delight the same way a well-made sitcom can entertain its audience. While there are plenty of things that should be denied in life, playing Fizbin’s latest effort is more than worthy of agreeing to.